Carers Edward Cairney, 77, and Avril Jones, 59, have been found guilty of murdering Margaret Fleming, pictured, at their house in Seacroft, Inverkip between December 1999 and January 2000

Two carers have been found guilty of murdering a vulnerable 19-year-old woman and covering up her killing for nearly two decades so they could claim £182,000 in benefits.

The vulnerable 19 year old had moved into their home in Seacroft, Inverkip, in October 1995 when her father Derek died after those closest to her ‘didn’t want her’, jurors at the High Court in Glasgow heard.

Jones was further convicted of fraudulently claiming £182,000 in benefits by pretending that Ms Fleming – who was reported missing in October 2016 – was alive after a seven-week trial.

Ms Fleming vanished ‘from the face of the earth’ around December 1999, and her body has never been found.

Prosecutors alleged that they locked her in a room, cut her hair and bound her arms and wrists with tape and other material.

The case raises serious questions about local social services who only reported Ms Fleming missing in October 2016 when they were unable to contact her.

The jury took around three hours over two days to reach their majority verdict on the murder charge. Cairney and Jones will be sentenced next month. 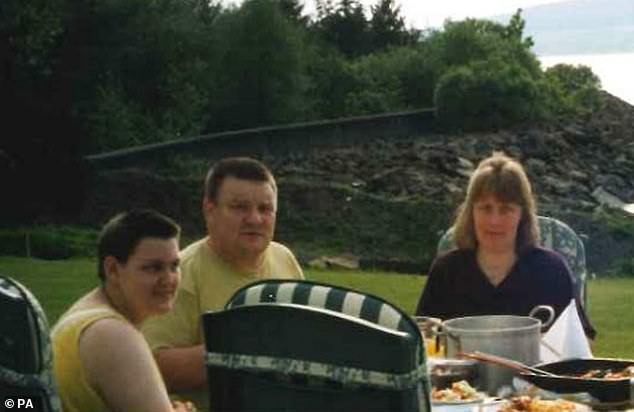 Holding them jointly responsibility for the death, the Crown claimed the couple ‘literally got away with murder for 16 years’. Ms Fleming, left, is pictured with her carers 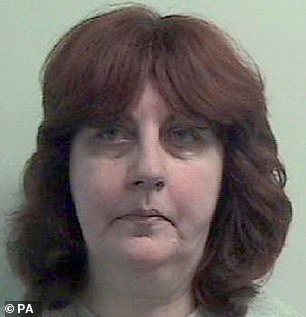 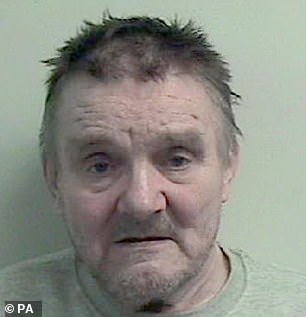 The case raises serious questions about local social services who only reported Ms Fleming missing in October 2016 when they were unable to contact her. They were ultimately brought down by ‘greed, arrogance and lies’ after Jones made claims of Ms Fleming having ‘fantastical’ illnesses and conditions in correspondence with benefits officials 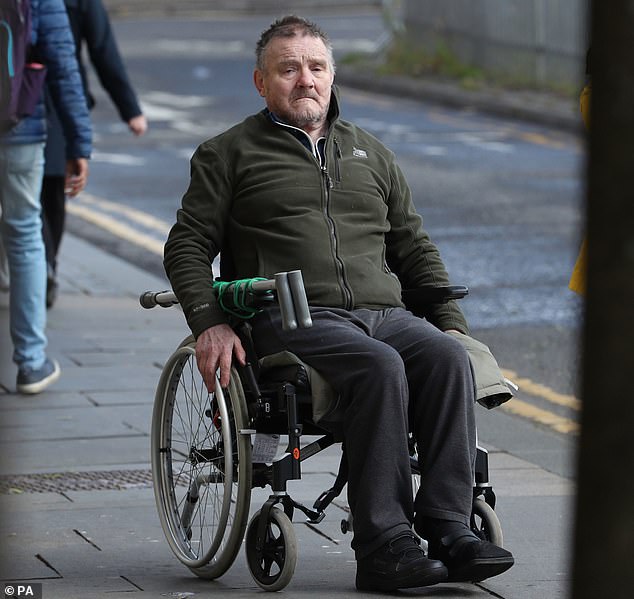 Cairney, pictured today, told police he met Ms Fleming 10 days before his police interview in October 2017, and that she was still alive. Her body has never been found

During their trial, which began in April this year, Ms Fleming was described by prosecutors as a ‘friendless and lonely’ young woman who had significant difficulties.

By October 1999, various benefits for Ms Fleming flowed into the household, which was said to have had financial difficulties.

The Crown suggested it was ‘tempting’ for the couple to have the money but not the ‘inconvenience’ of looking after her.

But during an interview with BBC Scotland’s Suzanne Allan in October 2017 the killer couple brazenly denied having anything to do with the disappearance of the woman they were today convicted of murdering.

In the chilling clip, Allan asks if either of them harmed Margaret. Jones and Cairney both reply no, and Cairney adds: ‘Far from it’.

‘She’s come to no harm unless she got harmed in the couple of weeks,’ he says.

Allan also asks whether the pair had heard from Margaret since she vanished, which prompted Cairney to reply: ‘Oh yes, she’s alive and working as a gangmaster in Poland.’ 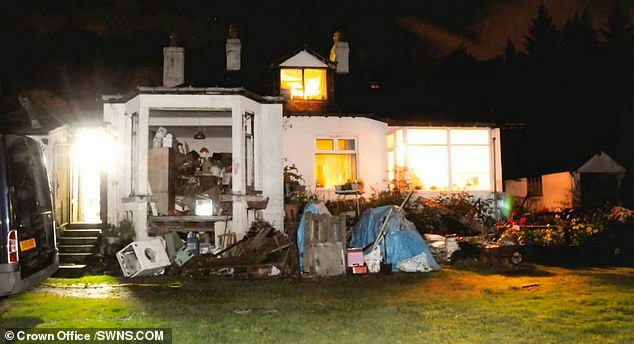 Forensic teams spent months sifting through the house, pictured, for any documentation of her life, and a large garden at the property was excavated as part of the search 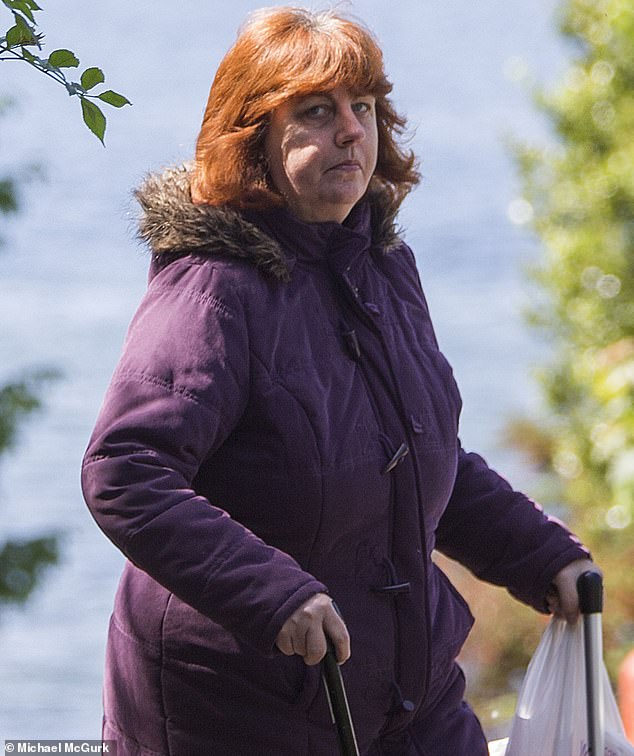 Jones, pictured, was further convicted of fraudulently claiming £182,000 in benefits by pretending that Ms Fleming – who was reported missing in October 2016 – was alive after a seven-week trial 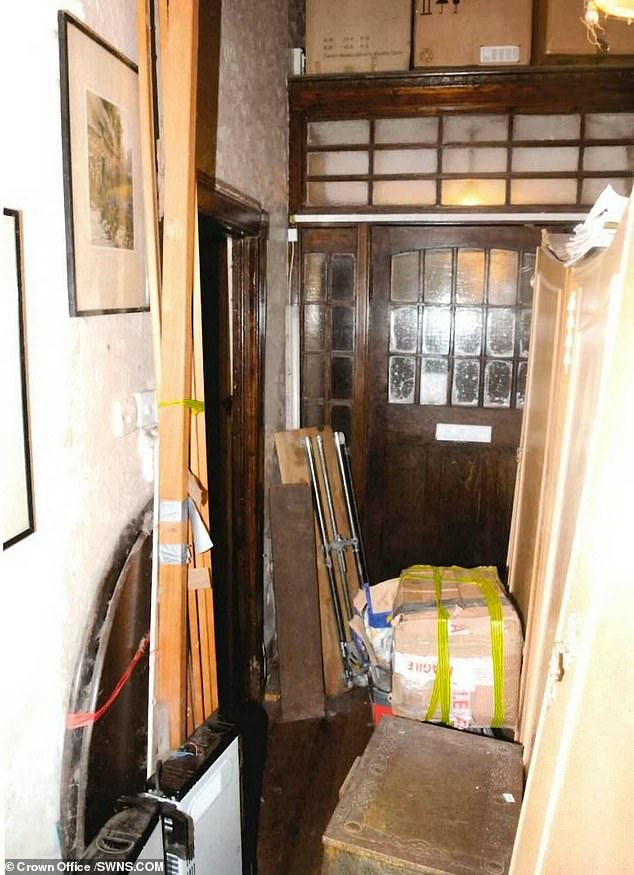 Prosecutors alleged that they locked her in a room, cut her hair and bound her arms and wrists with tape and other material. Pictured: inside the house

How, and exactly when, Ms Fleming died, may never be fully known. It remains, as the defence highlighted, a case without a body and without a crime scene.

Holding them jointly responsibility for the death, the Crown claimed the couple ‘literally got away with murder for 16 years’.

‘A living hell’: The history of abuse victim suffered

Detective superintendent Paul Livingstone – who led the inquiry – said Margaret’s last days must have been a ‘living hell’.

He added outside court: ‘Margaret was described as a fun, caring young woman.

‘Despite having mild learn difficulties, she just wanted to be loved and have friends

‘Margaret had been at college for a brief time before Cairney and Jones began to control her life and keep her prisoner within their home.

‘She was subjected to daily punishment including being tied up, having her hair cut short and deprived of food.

‘She was subjected to what can only be described as horrific living conditions.

‘For them to continue the charade for all these years is absolutely abhorrent – one of the reasons being for financial gain.

‘We will never know how Margaret was killed.

‘She must have felt she was alone in the world with no one coming to help her, which is absolutely heartbreaking to think of.

‘Who knows what she might have went on to achieve in her life if it had not been ended prematurely at the hands of Cairney and Jones.’

They were ultimately brought down by ‘greed, arrogance and lies’ after Jones made claims of Ms Fleming having ‘fantastical’ illnesses and conditions in correspondence with benefits officials.

As police zoned in on the couple, their fabricated stories to explain Ms Fleming’s absence became increasingly ‘farcical’ as they tried to reconcile claims she was both working as a gangmaster and capable of travelling overseas, and that she was someone with major difficulties requiring a number of benefits.

Cairney claimed Ms Fleming is still alive, and had told police he met her 10 days before he was interviewed by officers in October 2017.

His QC Thomas Ross asked him on Monday: ‘Have you ever harmed Margaret?’

Cairney said: ‘No, I certainly have not. I am incapable of harming a lady… just cannot do that.’

Retired marine engineer Cairney claimed that Ms Fleming went missing in early 2000, but came back around a week later.

The court heard claims Cairney then met Ms Fleming in London in 2017.

He said he told Ms Fleming police were looking for her and that they were ‘holding us to ransom’.

Cairney insisted that was the last he saw Ms Fleming. He was later detained by police.

A search for her was launched after officers were asked by social work officers to visit her remote five-bedroom house, which lies next to the Scottish coast.

Police forensic teams spent months sifting through the house, where she lived with her carers, for any documentation of her life, and a large garden at the property was excavated as part of the search.

The probe extended more than 500 metres into the River Clyde and also into a nearby woodland but her whereabouts remain a mystery. 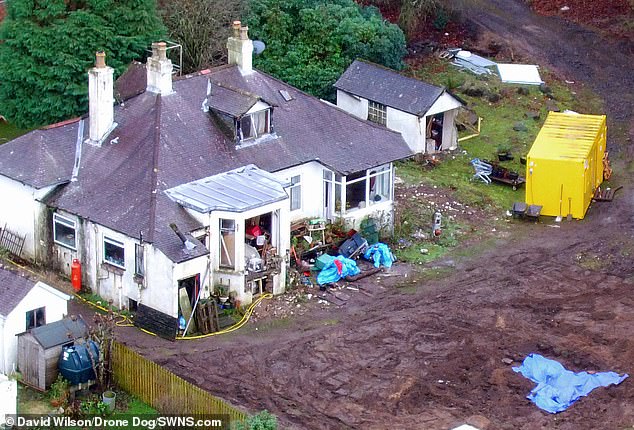 Jurors heard that Cairney and Jones became carers for Ms Fleming, who would now be 38, when her lawyer father died in October 1995 (pictured: The Inverkip home)

Timeline of the murder of Margaret Fleming

October 1995: Margaret Fleming’s father dies. No one in her family volunteers to look after her, so she moves into Edward Cairney and Avril Jones’ home in Seacroft, Inverkip, Renfrewshire

December 18, 1999, and January 5, 2000: At some point between these dates, Ms Fleming is murdered by her two carers. It is not known where the killing took place, or what method was used.

October 28, 2016: Margaret Fleming is reported missing by her two carers from her home in Main Road, Inverkip, Inverclyde.

December 12, 2016: Police say they will be carrying out excavation work in the garden and are ‘carefully sifting through the house’ where Ms Fleming was believed to live with her two carers.

Specialist search teams including the police helicopter, dog unit and dive teams had also been searching across Inverclyde.

December 17, 2016: On the anniversary of the last independent sighting of Ms Fleming, which was at a family gathering on December 17 1999, police say it is possible she ‘may have come to some harm’ and say their priority is establishing her movements and lifestyle from 1999 onwards.

It is understood police went to the house as part of a routine social services inquiry in October 2016 but were told she was not there, and her carers later reported her missing.

December 21, 2016: Police ban the flying of drones over an area where they are searching, with the restriction in place until late February.

No aircraft other than Police Scotland, Scottish Ambulance Service or Maritime Coast Guard Agency assets can fly below 1,500ft in the area, police say.

April 28, 2017: Police say Ms Fleming’s disappearance may be down to ‘something more sinister’ as their search at the property concludes.

Officers have been sifting through thousands of items, paperwork, documents and articles taken from the house and have been in contact with around 1,200 individuals and organisations who may have had contact with Ms Fleming.

Police say the search they carried out in the house and the grounds extended into nearby water and woodland.

The area searched in the garden alone was around half a hectare.

October 27, 2017: The pair appear at Greenock Sheriff Court charged with murder, abduction and assault, fraud and an attempt to defeat the ends of justice. They make no plea and are remanded in custody.

May 28, 2018: Cairney and Jones appear at the High Court in Livingston charged with abducting and murdering Ms Fleming and claiming £182,000 in benefits by fraud by pretending that she was still alive.

The pair’s lawyers enter not-guilty pleas to all the charges on their behalf during the first public hearing of the case.

September 26, 2018: The pair go on trial at the High Court in Glasgow accused of abducting and murdering Ms Fleming and fraudulently claiming £182,000 in benefits by pretending she was still alive.

October 18, 2018: The trial is deserted pro loco et tempore with the Crown expected to reindict the case with a fresh trial at a later date.

April 25, 2019: Cairney and Jones go on trial at the High Court in Glasgow. They are accused of assaulting and murdering Ms Fleming and fraudulently claiming £182,000 in benefits by pretending she was alive.

June 14, 2019: Both accused are convicted of murder on a majority verdict.