The Tartan Army which invaded London last night have proudly proved their credentials as true Scotsmen – by revealing their lack of underwear under their kilts.

A number of football fans who stormed the capital last night insisted on maintaining tradition as they got naked in London’s parks and on the Tube, much to the shock of onlooking locals.

Thousands of supporters made the trip south of the border ahead of tonight’s much-anticipated Euro 2020 clash between England and Scotland at Wembley.

But in some cases, their antics were a little more extreme than some Londoners might have been expecting.

On the underground, one passenger appears to flinch as they witness a chanting Scottish fan doing the worm in the middle of the carriage.

In the process, his kilt rises up, leaving little to the imagination as it reveals everything underneath, while his friends cheer in encouragement.

Elsewhere, another supporter removed his dress entirely to be left completely nude in Hyde Park, before being escorted away by a crowd of police officers. 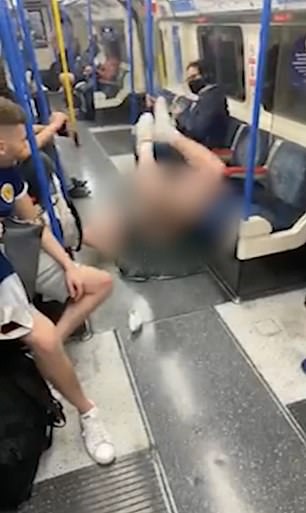 On the underground, one passenger appears to flinch as they witness a chanting Scottish fan doing the worm in the middle of the carriage 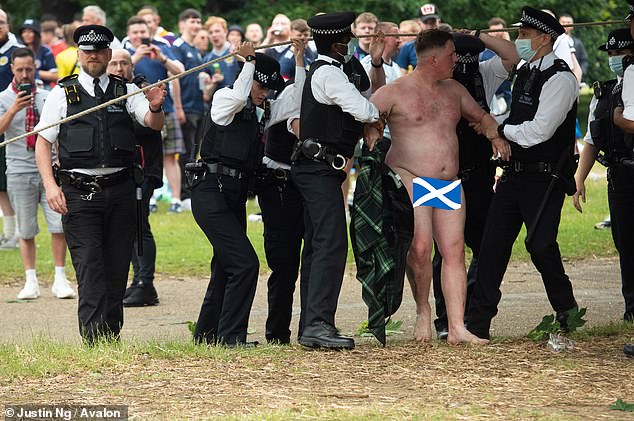 One supporter removed his dress entirely to be left completely nude in Hyde Park, before being escorted away by a crowd of police officers 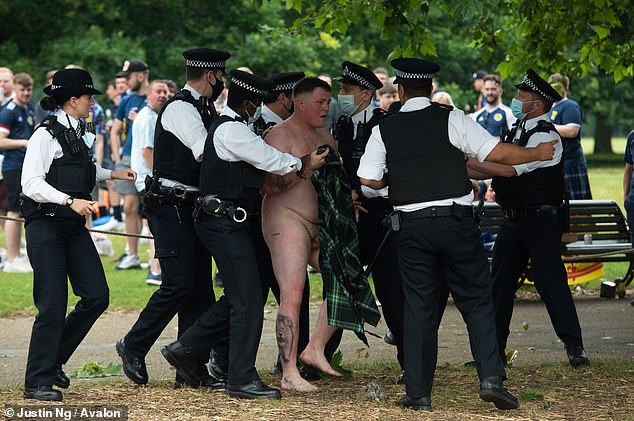 The fan, who was completely naked in the famous park, was quickly ushered away by police 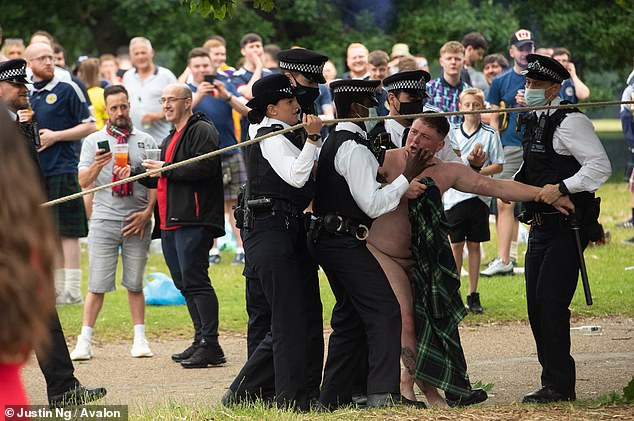 A total of 20,000 ticketless fans have descended on the capital ahead of tonight’s match, with a number seen chanting ‘we hate f***ing England’ as they jumped into the William Shakespeare fountain in Leicester Square.

Video shared on social media appeared to show individuals being arrested. However, the Metropolitan Police were unable to give a total number when MailOnline asked last night.

Meanwhile, footage also showed the moment a drunk Scottish fan is hit by a motorbike after stumbling across a busy London road.

The supporter staggers straight into oncoming traffic and the collision knocks both him and the biker – who tooted their horn on approach to no avail – flying.

The footage, filmed by a friend who can be heard laughing throughout the incident, has already been viewed more than 620,000 times.

The friend later posted a picture of the fan, sprawled across a bed, still wearing his Scotland shirt, confirming he wasn’t badly hurt.

Supporters poured off trains at King’s Cross Station yesterday, despite just 2,800 tickets being sold to Scotland fans, after Mayor Sadiq Khan pleaded with ticketless supporters to ‘enjoy the game from Scotland’.

The Mayor’s warnings that the influx of people would cause a ‘serious risk’ of spreading Covid-19 prompted pubs to cancel bookings, while London Ambulance Service admitted it had no plans to have an increased amount of medics on standby as a mass party broke out in Hyde Park. 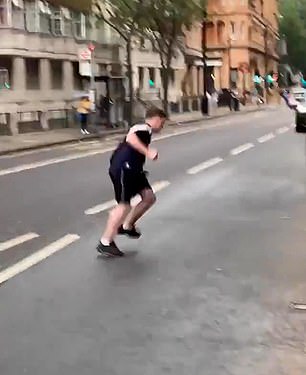 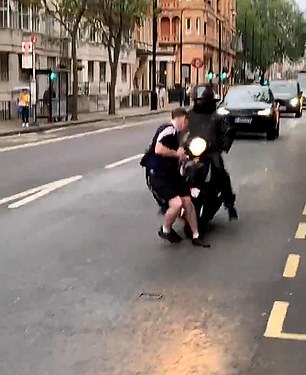 The supporter staggers across the road (left), straight into the path of a motorbike (right) 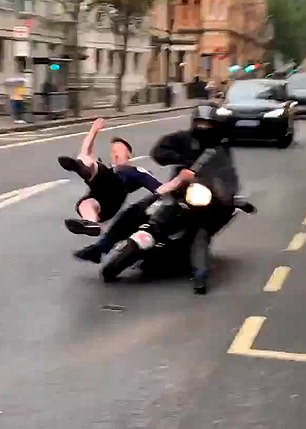 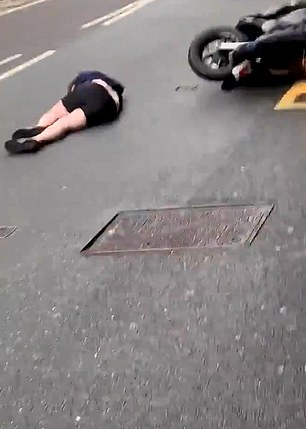 Glasgow was previously a hotspot for the so-called Indian coronavirus variant, but has since been downgraded from its high alert status.

Though most of Scotland was recently lowered to Level One in the county’s five-tier system, 13 council areas are in Level Two as the virus surges.

Scotland Yard has now issued a Section 35 Dispersal Order until 3pm on Saturday, in anticipation of ‘anti-social behaviour’.

The order gives a police constable and a police community support officer the power to exclude a person from an area for 48 hours with an Inspector’s authority.

With rain expected to pour throughout the day, celebrations could be dampened – meaning that police could have less on their hands than they might otherwise expect ahead of the Euro 2020 clash.

A Metropolitan Police spokesman tweeted last night: ‘Due to the high profile UEFA EURO Football match between England & Scotland on Friday 18th June at 8pm and the anticipated anti-social behaviour this may bring, a section 35 dispersal authority has been implemented.

‘This has been authorised by Inspector Dodds from 1500 hours 17/06/21 till 1500 hours 19/06/21 in the West End area in an attempt to reduce the likelihood of members of the public being caused alarm harassment and distress and the occurrence of criminality in the local area.’