Britai’s oldest investment trust has defended its near-£2billion stake in Tesla after selling out of Facebook and trimming its holding in Amazon.

Scottish Mortgage said its position in Tesla – 12 per cent of its portfolio – was justified by the firm’s ‘significant’ progress and the long-term potential of the electric car industry.

By contrast, it has ditched its entire holding in social network Facebook and shrunk its stake in Amazon because the ecommerce giant’s £1.3 trillion value makes getting big returns ‘more challenging’.

In demand: Tesla Model 3 cars roll down  the production line at the electric car maker’s factory in Shanghai, China. Scottish Mortgage has almost £2bn tied up in the company

But the trust has made a huge profit from its holding in Tesla, following a 560 per cent rise its share price over the past year.

It was forced to sell 40 per cent of its Tesla shares this year to maintain a balanced portfolio, raising £1.2billion in the process.

At the end of September, its remaining stake was still worth £1.9billion. The investment in Tesla has been a boon for thousands of investors in Scottish Mortgage. 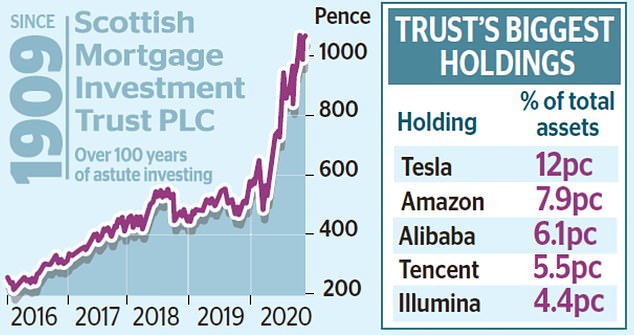 Its support for Tesla was based on a strategy of backing ‘exceptional companies’ pursuing big opportunities.

It added: ‘Whilst the company and its colourful founder attract an unusually high degree of attention, emotion and noise, the underlying return picture is far from an aberration. We prefer to partner with the entrepreneurs that are driving change.’

But Scottish Mortgage completely sold out of Facebook, which it held a stake of 4.8 per cent in two years ago.

That followed growing regulatory scrutiny of the social media giant, which has been accused of failing to police extreme content on its platforms and of using ‘monopoly-style’ tactics to crush smaller rivals.