Scottish rabbit curls up in the cold, while bats swoop down for a quick drink of water…

A stunning picture of a Scottish hare curled into a perfect ball in a blizzard as ice forms on its fur has beaten thousands of entries to scoop the grand prize in an international picture competition.

The image, named ‘Hare Ball’ by Andy Parkinson beat off stiff competition from around the world to land the top prize in the California Academy of Sciences’ BigPicture Natural World Photography Competition 2020.

Other category winners included an amazing shot of a bat swooping down to take a sip of water from a river in drought-stricken Malawi; a group of crabeater seals swimming around glaciers; and a cheetah twisted upside down as it latches on to an antelope in the African savanna.

Some of the more offbeat shots include a haul of dead songbirds killed by pet cats, a pair of mating frogs and an aerial shot of hundreds of hungry hippos trapped in a muddy river.

This years’ striking images depict some of the biggest challenges facing the natural world including poaching, droughts, hunting and cross-species diseases.

A stunning picture of a Scottish hare curled into a perfect ball in a blizzard as ice forms on its fur has beaten thousands of entries to scoop the grand prize in an international picture competition. To get his Grand Prize shot, photographer Andy Parkinson endured weeks of ferocious cold and wind that drove shards of ice into his face at Tomatin, near Inverness. While some ride out storms in burrows or depressions, this female hare created her own shelter, tucking herself in to a ball to conserve heat and minimise exposure to the elements. Mountain hares have been native to Britain since the last ice age more than 10,000 years ago and are a separate species from the more common brown hare 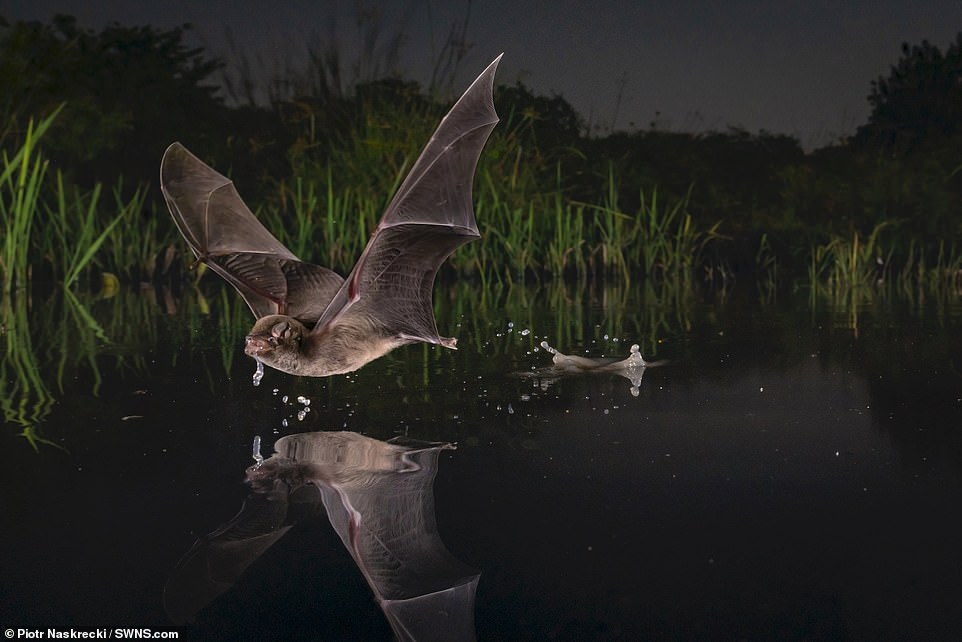 The winner of the Winged Life category shows a Mozambican long-fingered bat taking a sip of water in one of the last remaining watering holes at the end of the dry season in Gorongosa National Park, Mozambique. At the southern tip of Africa’s Great Rift Valley during the summer many lakes and rivers are reduced to puddles and trickles. Without adequate water, healthy bats begin to weaken, making them more susceptible to diseases and to survive are forced to drink from human-made bodies of water, where killer diseases like Ebola and the coronavirus can cross to other species 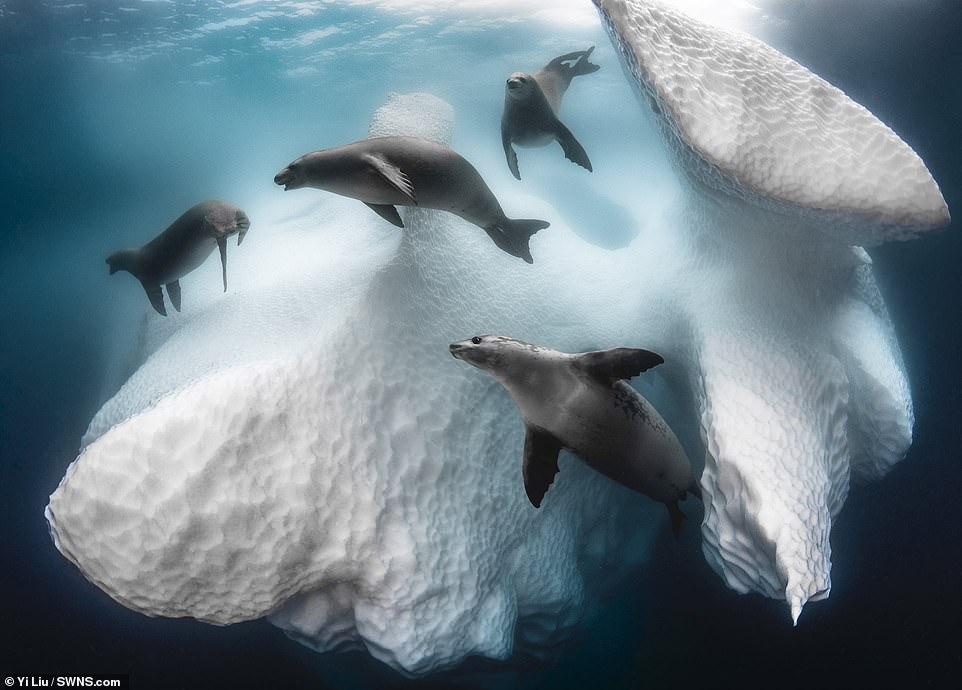 Frenchman Greg Lecouer’s shot of a group of Antarctic crabeater seals swimming around glaciers taken underwater bagged him the Aquatic Life prize. The seals have evolved a sieve-like tooth structure that filters krill. The seals, which can weigh up to 650lb, suck in water containing krill, close their jaws, and then force the water back out. The krill trapped inside makes up the majority of the crabeaters’ diet 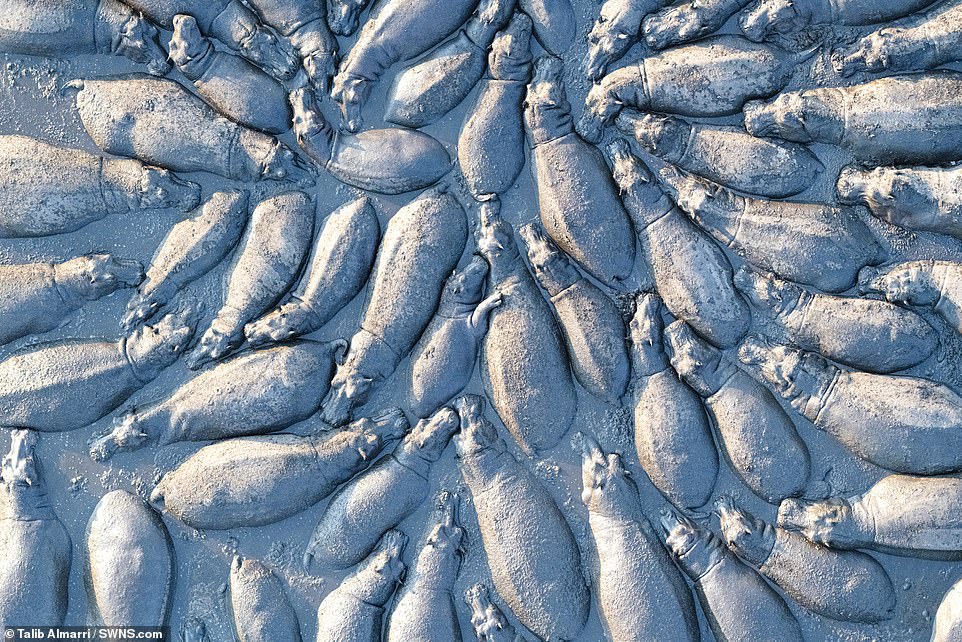 Each winter, as the waters of Botswana’s Okavango River spread across its vast delta, an array of African wildlife congregates to eat, drink, splash, and soak. This seasonal wetland was especially important in 2019, when severe drought left human and animal populations alike desperate for water. Cattle, elephants, crocodiles, and other creatures were left to vie for any water they could find in the delta’s shrinking pools. Among those seeking refuge were herds of hippopotamuses. These semi-aquatic herbivores are well-equipped for spending hours each day in the water their nostrils and eyes located so high on their head that they can breathe and see while mostly submerged. This image earned a place in the finals for the Terrestrial Wildlife category 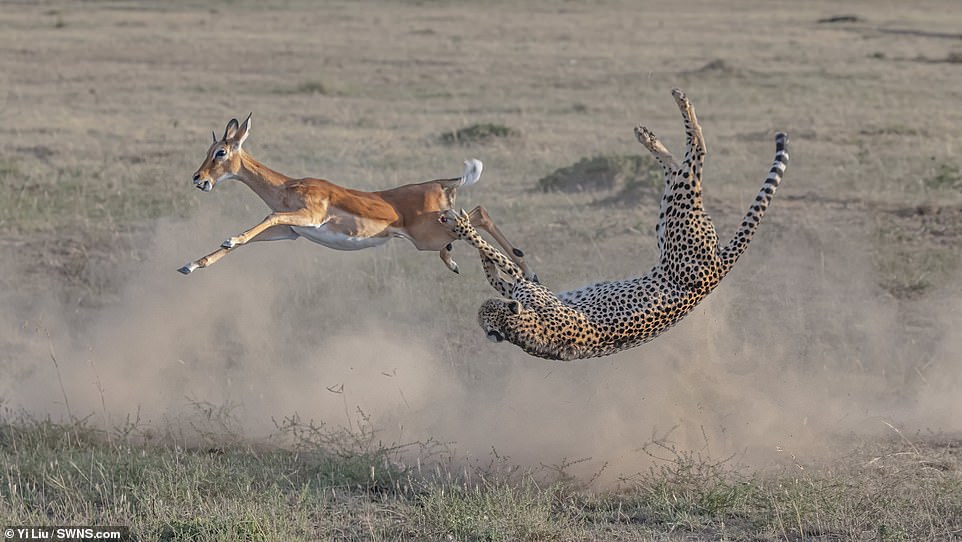 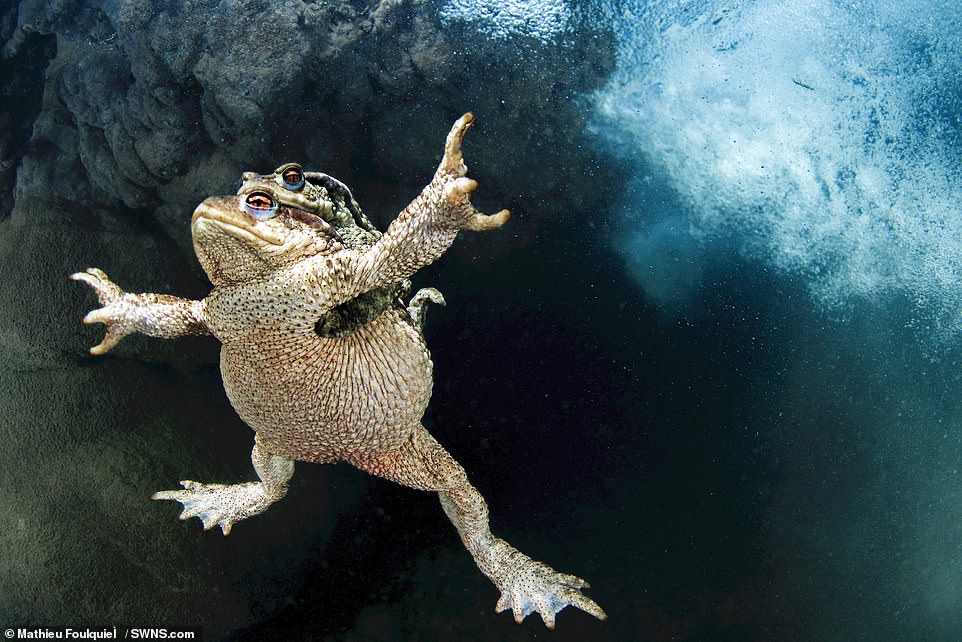 This image – which earned a place in the finals for the Aquatic Life category – shows a male common toad and his female companion beneath the turbulence of a small waterfall in France’s Lez River.  The male is helping to ensure his species’ survival by fertilising his female companion’s eggs as she lays them 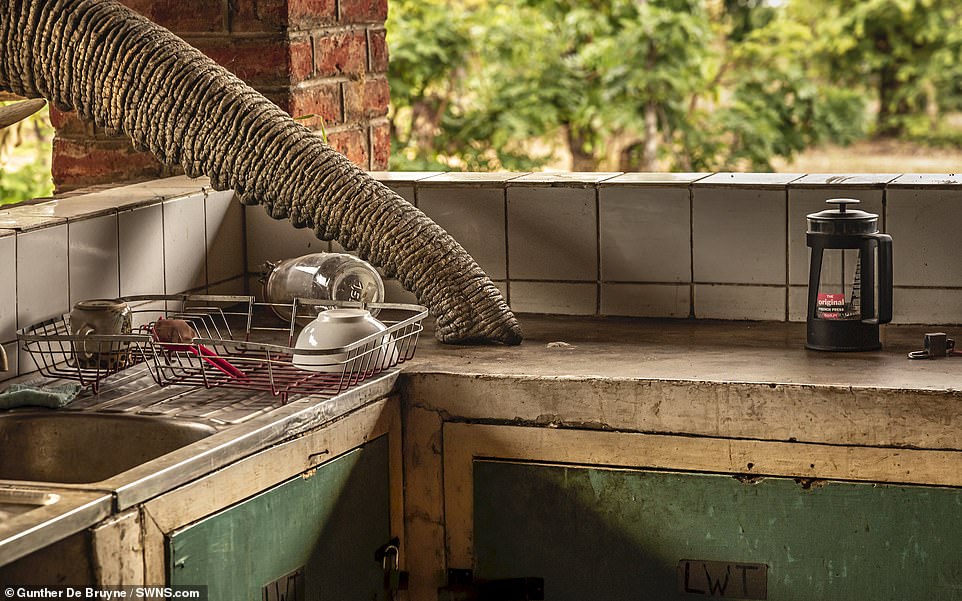 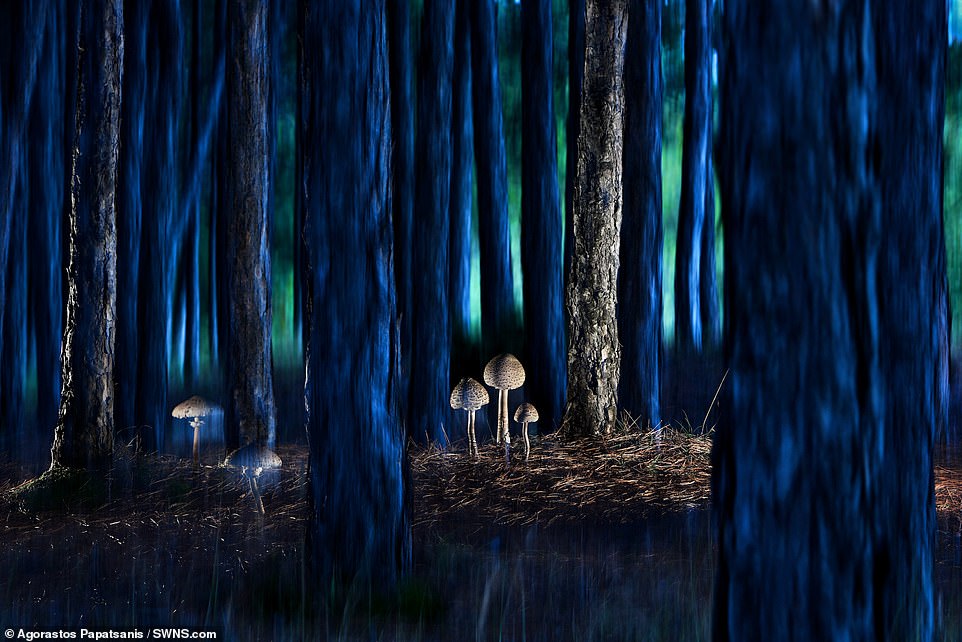 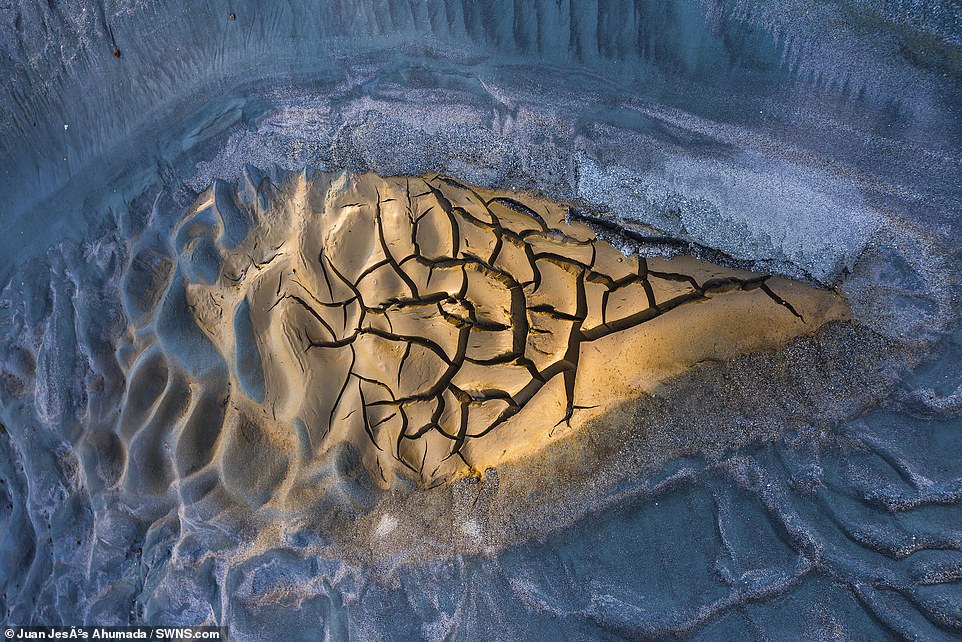 Along the Ra­o Tinto in western Spain, layers of multicoloured sediment combine with blood red water to produce an other-worldly effect. But the strange coloration shown here is caused by cracked mud at the river’s edge. This image won the competition’s Art of Nature category 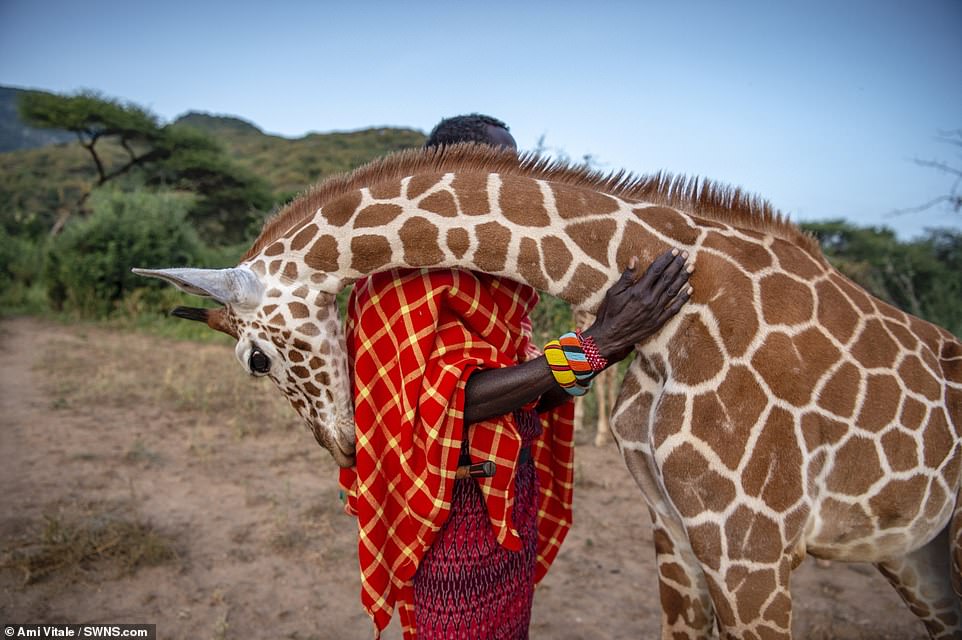 The winner of the Photo Story category shows a reticulated giraffe with the Samburu people of northern Kenya, who discovered their cattle were also suffering as poachers decimated elephant populations in recent decades. Photographer Ami Vitale from the US said: ‘Indigenous communities hold the key to saving Africa’s great animals. Where these communities are intact, poaching has dramatically decreased.’ 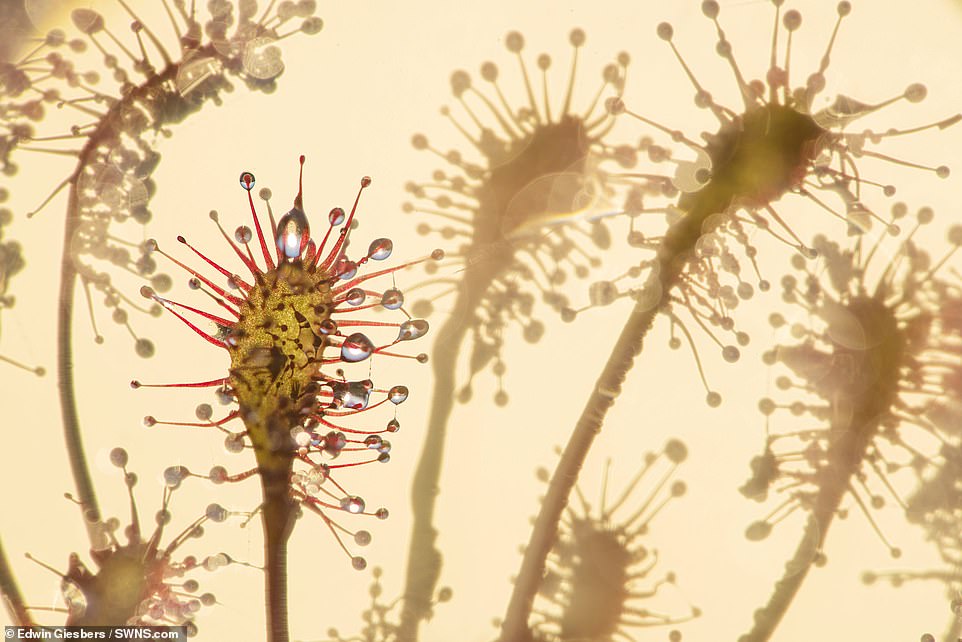 Landscapes, Waterscapes, & Flora Winner: ‘Sundew; Drosera intermedia’. The plants lure their prey with temptations such as delicious scents, striking colors and nectar. To then capture them very ingeniously via traps, drowning and sticky substances and then digest them 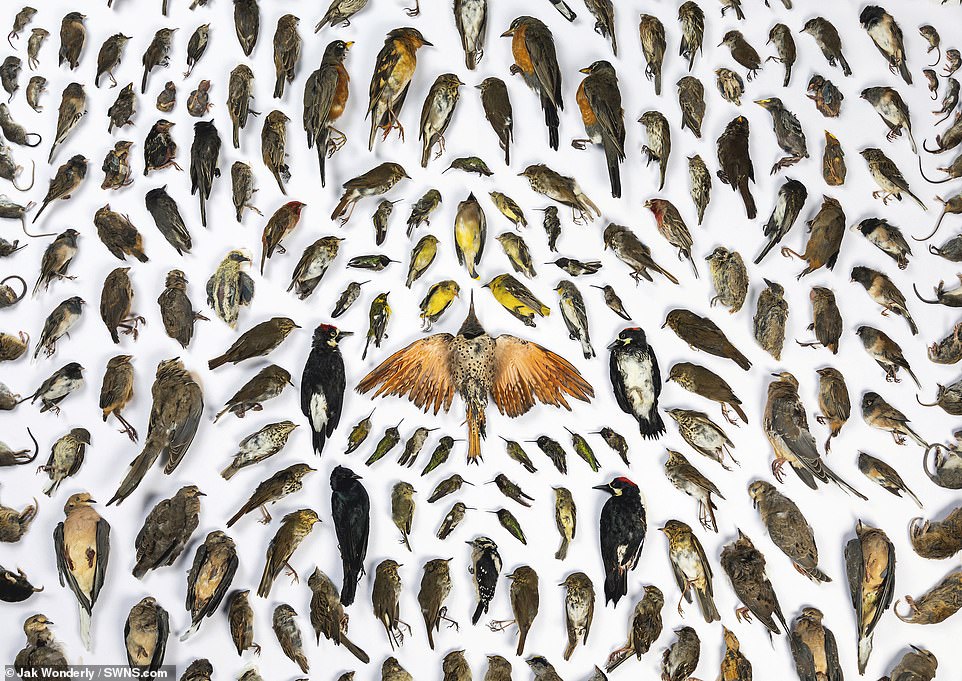