Scouts have been given a post-Brexit plan to help out at refugee camps in Britain – and have been encouraged to take up a series of bizarre activities including Armenian Egg Jousting.

Leaders have even been handed ‘useful guides’ to show Scouts and teach them how to tell the difference between a ‘refugee’ and a ‘migrant’, with photos of former England footballer David Beckham and billionaire businessman Richard Branson listed as ‘migrants’.

David and Victoria Beckham, pictured, are being used as an example of a migrant couple by The Scouts as they had left their home voluntarily while the footballer continued with his career in Spain and the United States 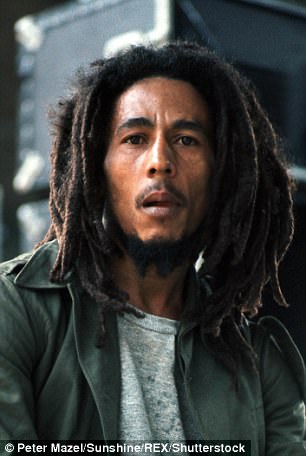 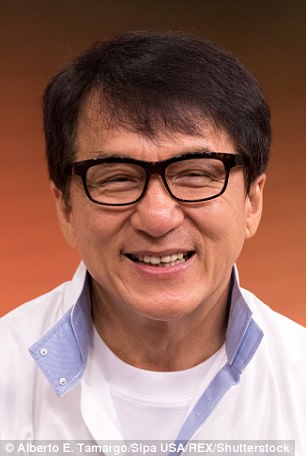 Bob Marley, left, and Jackie Chan, right, are being cited as refugees because they were forced to flee their homes in Jamaica and Hong Kong as a result of repeated death threats

The guide states that Bob Marley ‘fled from Jamaica to Miami after being shot during political violence’, that Anne Frank ‘fled from Nazi Germany to the Netherlands’, and that singer Rita Ora ‘fled to the UK in the 1990s from the Kosovan War’.

The advice goes on to say that actor Jackie Chan ‘fled to the USA from Hong Kong after being threatened with death by the Triads’, that signer Mika ‘fled from the Lebanese civiil war to come to Europe’ and that Albert Einstein ‘fled Nazi Germany during World War Two’.

The guide tells leaders to ‘show the photos’ to Scouts and ask if they are ‘migrants or refugees’, adding: ‘Point out those that were refugees.

‘The definition of a refugee is someone who had got permission to stay in another country because, if they return home country, they will be in great danger.

‘The difference between refugees and migrants is that a refugee has no choice in leaving their country as they are in danger, whilst a migrant chooses to leave their country (for family, work, quality of life).’

Scouts, of which there are just over 450,000 in the UK, are also told that by taking part in the ‘Refugee Response’ activity they can work towards their ‘World Membership Badge’.

Youngsters more used to washing cars, lighting fires and adjusting woggles are also given instructions in how to consider life in post-Brexit Britain in the movement’s official magazine Scouting in its latest Spring 2018 edition – with the possibility of helping out at refugee camps on the agenda.

Some leaders fear it is part of a politically-correct shift under new chief scout Bear Grylls, the TV adventurer and a prominent Remain campaigner.

The latest issue tells readers that local councils in Kent have discussed setting up ‘refugee camps in Dover’ following the Leave vote in the EU referendum, and that the UK was facing ‘the world’s biggest migration crisis since World War Two’. 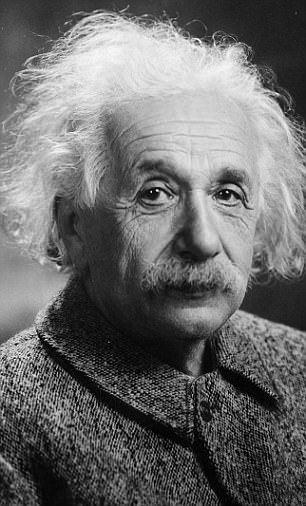 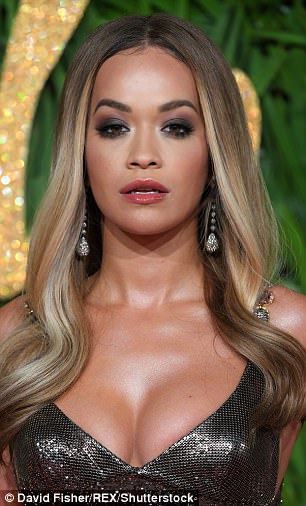 Both Albert Einstein and Rita Ora, right, were forced to flee their homes

In a report headlined ‘Human Kindness’ in the magazine, it stated: ‘In 2015, David Cameron, then Prime Minister, announced the UK would welcome 20,000 refugees by 2020 and encouraged people to think about what they could do to help welcome refugees to the UK.

‘As the largest co-educational youth movement in the UK, the Scouts has an important role to play in supporting young people to understand these global issues and insure we remain an open and inclusive movement.’

It added: ‘This is not a new topic for the (Scouting) Movement. In fact, UK Scouting has a long history of supporting and including displaced people going all the way back to the earliest days of the Movement.’

The report states that Scouts helped Belgian refugees fleeing war-torn Europe in the First World War as well as supporting the Kintertransport scheme in which children fleeing Nazi Germany were homed in the UK.

The report continues: ‘With the current refugee crisis becoming an increasing concern across Europe, Scouts and Guides from across Europe agreed that they needed to do something about it.

‘They committed to playing an active role in the current migrant and refugee situation in Europe by continuing to encourage partnerships with humanitarian organisations that can support them in taking action and in producing educational materials for Guides and Scouts.

‘They also committed a call on European institutions to take action to support human rights in Europe, and to identify opportunities for joint work relating to human rights and the refugee crisis.’

David Wraight, the Assistant County Commissioner (International) in Kent – and the Explorer leader at the 38th and 40th Strood Explorer Scout Unit – said the Scouting Movement would help out at refugee camps if they were set up in Dover after Brexit.

He told Scouting magazine: ‘We were aware that French Scouts had been doing work in refugee camps so we started looking at what we might do in Kent.

‘If Scout values are to mean anything, we have a duty to our young people to provide an opportunity to consider issues like the refugee crisis, and to talk to local refugee communities about what help we can provide.’ 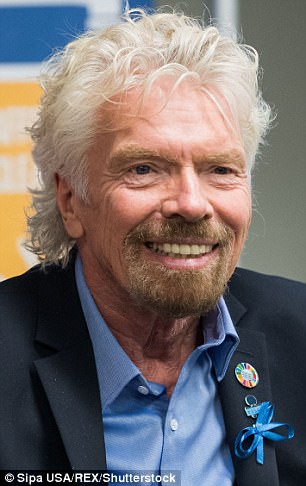 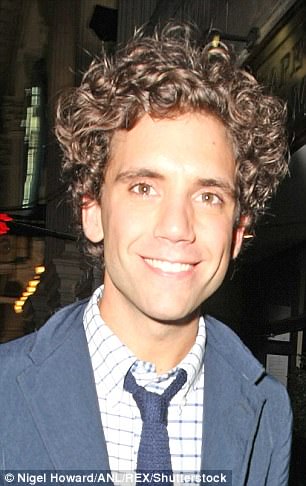 Richard Branson, left, is a migrant for moving to Necker while Mika, right, was forced to flee the Lebanese civil war to Europe

Explorer leader Tony Malone, who is also the Specialist Adviser for Diversity and Inclusion at the Scouts, told the magazine: ‘We began to wonder if Kent Scouts could set up a refugee group within a camp that was integrated with local surrounding groups.

‘That hasn’t happened yet but that is where our heads are at.’

Meanwhile the hitherto-unknown pursuit of egg jousting from Armenia is among a series of new games for Scout groups plugged in the latest edition, including full instructions for players.

Leaders are told: ‘Share the Armenian Easter egg-cracking tradition with your young people. In advance, boil eggs (enough for everyone in your section) for about 20 minutes. 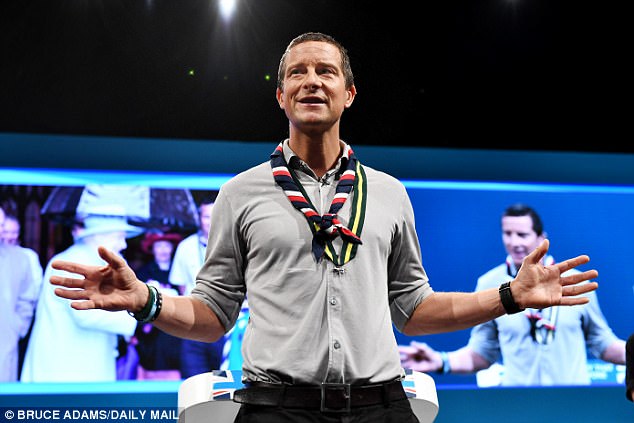 Chief Scout Bear Grylls, pictured, said the organisation has an important role to teach scouts about the world around them and to understand the issue of refugees

‘To play, two players face each other, each holding an egg inn hand. They should tap the smaller ends of the eggs together until one egg cracks.

‘The winner goes on to battle the next egg wielder. At the end of the game, use the eggs to make egg-mayonnaise sandwiches for the whole section!’.

Other suggested activities include Catch the Dragon’s Tail from China and Luta de Galo – a ‘two person hopping game’ which originates from Brazil.

Writing in the latest edition, Chief Scout Bear Grylls, said: ‘I strongly believe that Scouting has a role to play in supporting young people in understanding the world around them.

‘The help with this discussion, we take a look at new resources created to help young people and adults in Scouting explore the topic of refugees.’

Mr Grylls, writing before the EU ‘No vote’, wrote that the referendum has ‘been hard to watch’, adding: ‘I have never been a good quitter and I am so proud of the UK and our values: tolerance, kindness, respect, courage and resilience.

‘This is why I want us to stay together and Remain in Europe.’

One Scout leader, who asked not to be named, said: ‘It seems very odd that Brexit is creeping into our official literature.

‘Scouting is a non-political organisation, but it seems to be pushing the Remain agenda under Bear Grylls.’

Another leader said that the days of Scouts going on camps and having sing-songs round a camp fire were becoming ‘increasingly scare’ because a shortage of volunteers.

Despite just over 150,000 adults working as volunteers, the Scout Association recently said it needed 17,000 more volunteers to meet demand.

The leader, who asked not to be named, said: ‘We are struggling to get volunteers to help out, so more time is spent in Scout halls rather than out and about – but I’m not sure showing photos of David Beckham and Bob Marley is the best way for us to move forward.’

A spokesman for the Scouts said today: ‘A key area of our work is helping young people explore the world around them and develop in to positive citizens.

‘We encourage our members to become active citizens and take action on issues they care about. Just last week I was speaking to a group that had been taking action on dementia.

‘Scouting magazine is a publication for our 1500,00 adult volunteers and helps to keep them informed and provide them with support and ideas for the work they do with young people. Part of this work is helping young people develop an understanding of the refugee situation.

‘They have been doing some great stuff working on a project named foodKIND. Through the project Scouts from across Europe have been coming together to use their skills, resources and common values to provide support.

‘Much of the value of this work is that the Scouts are trusted by the refugees because they are independent.

‘I’ve been told stories about refugees seeing the Scout scarf and approaching the volunteers to say ‘I was a Scout in Syria’.

‘This immediately led to a bond that could overcome language and other barriers. This link has such a powerful impact on their peers around them in the camp, it breaks down suspicion.

‘The refugees understand that with a Scout, you know what you’re going to get*a trustworthy, hardworking, honest and caring young citizen, who will not judge them by their nationality, or be the difference between someone being granted asylum or not. They know that they’re there to help.

‘Scouting is the world’s largest movement working for peace and understanding. For nearly a century we’ve brought the young people of the world together every four years at the World Scout Jamboree.

‘The event gets young people from nearly every country in the world to come together, live and play together and learn that we have more similarities than we do differences. By engaging young people in this way we believe that you can make real change in the world.’