Seabird born in 1975 is rediscovered on a Scottish island

A seabird found on an uninhabited island in Orkney is the oldest of its kind, experts reveal.

The fulmar – a type of tube-nosed seabird – was born in July 1975 and spotted almost half a century later on the island of Eynhallow, says the British Trust for Ornithology.

Researchers were able to work out its age thanks to a numbered ring that was fitted to its leg by a volunteer back in 1975, when the bird was still a fledgling on Eynhallow.

The time between ringing and being re-sighted is a new record for the fulmar, which is known for mating on cliffs and spitting out foul-smelling oil to defend its nest.

A fulmar first breeds when it is between six to 12 years old and it frequently returns to the nesting site where it first hatched.

Related to the massive albatross, the fulmar is a gull-like, tubenosed seabird that nests on rocky cliff edges. Pictured is a northern fulmar (file photo) 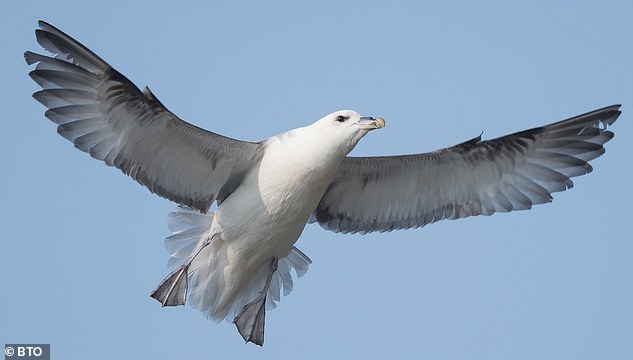 The fulmar flies low over the sea on stiff wings, with shallow wingbeats, gliding and banking to show its white and grey upperparts (pictured, northern fulmar) 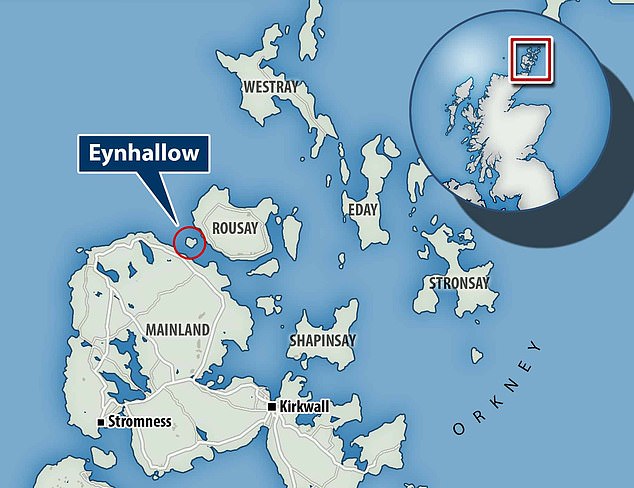 The fulmar was born in July 1975 and was spotted almost half a century later on the island of Eynhallow, Orkney, Scotland

WHAT IS THE FULMAR?

Almost gull-like, this grey and white seabird is related to the albatrosses.

The fulmar flies low over the sea on stiff wings, with shallow wingbeats, gliding and banking to show its white and grey upperparts.

At its breeding sites it will fly high up the cliff face, riding the updraughts.

They will feed in flocks out at sea and defend their nests from intruders by spitting out a foul-smelling oil.

Fulmars are said to have an average lifespan of 30 years, although some sources claim they can reach as old as 60 years. British Trust for Ornithology (BTO) claims this is the oldest known British fulmar to have its age confirmed.

The new record is one of many published in the latest ringing report from the BTO, which warns that fulmars are particularly threatened by avian influenza, otherwise known as bird flu.

Seabirds tend to be long-lived and slow to reproduce – a fulmar, for instance, might be as old as 12 years before it lays its first egg.

Even then, early breeding attempts are less likely to be successful, meaning it can take a very long time for populations to recover from disease.

‘Britain and Ireland’s seabird populations are of global importance,’ said Dr Dave Leech, head of the British and Irish Ringing Scheme at the BTO.

‘With avian influenza now adding to the significant, existing environmental pressures posed by changes in climate and habitat quality, the dedication of these highly skilled volunteers is more important than it ever has been and we are immensely grateful for their incredible contribution.’

Related to the massive albatross, the fulmar is a gull-like, tubenosed seabird that nests on rocky cliff edges. 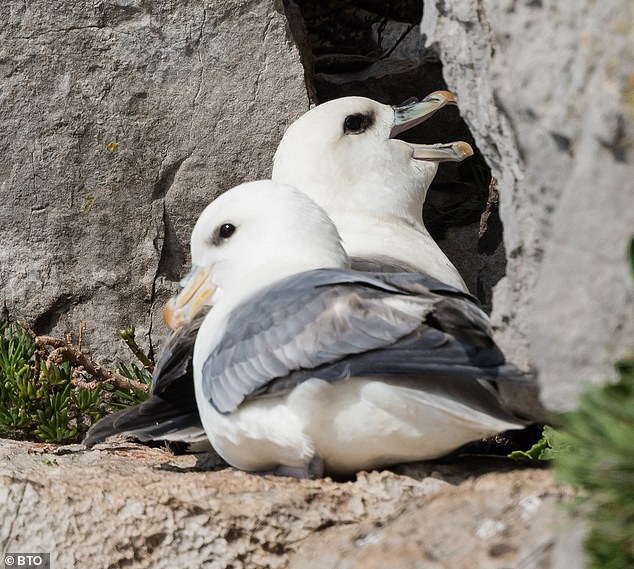 Despite their gull-like appearance, fulmars belong to the ‘tubenoses’, a family of birds that includes shearwaters, petrels and albatrosses.

The ‘tubes’ on these birds’ bills allow them to excrete salt from the seawater they drink.

This rediscovered bird from Eynhallow is a northern fulmar (Fulmarus glacialis). 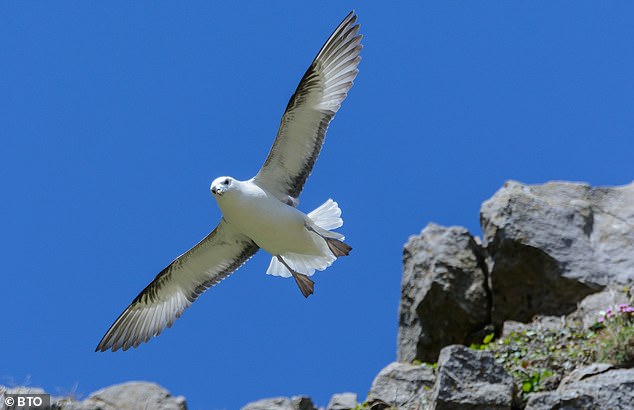 A fulmar first breeds when it is between six to 12 years old and it frequently returns to the nesting site where it first hatched (pictured, northern fulmar)

Around 350,000 pairs of fulmar breed on cliffs around the UK coastline and spend the winter out at sea.

According to the RSPB, the fulmar is abundant along Scottish coastline, especially on the Northern Isles, and least common along the east, south and north-west coasts of England.

Scottish Wildlife Trust says they can be seen between April and early September on breeding cliff sites.

Scotland is home to around 97 per cent of the UK population of Northern fulmars, the Trust adds, although since the mid to late 1990s records indicate a decline in numbers.

RSPCA announced this summer that its wildlife centres would no longer be accepting sick seabirds due to the avian flu outbreak.

The animal charity says avian influenza has become a serious problem this summer and there are high levels of morbidity and mortality, particularly in seabirds around the coast.

The RSPCA says it will try to respond to calls about sick and injured animals where possible and deal with them compassionately and appropriately.

‘In a bid to stop this highly contagious disease from killing hundreds of our wild patients, we have made the difficult decision to close our centres and branches to new seabird admissions.

‘This includes (but is not limited to) the most common seabird species: gulls, auks, terns, cormorants, shearwaters, gannets and fulmars.

‘Our animal rescue teams are continuing to attend reports of sick and injured birds.’