Seagull swallows whole RAT on street in Rome in video

A hungry seagull has been captured on camera swallowing a huge rat whole in front of bystanders.

The clip was filmed in the city of Rome, Italy, which is slowly emerging from a coronavirus lockdown.

In the clip, which has gone viral with three million views online, the seagull is seen on a pavement with the large rodent in its beak.

The seagull then swallowed the bird whole as the person filming exclaimed: ‘Oh my God!’

With only the rat’s tail visible from its mouth, the seagull flew off when somebody walks out of an entrance and appears to scare it.

The city has seen less tourists and empty streets amid the coronavirus lockdown, which is starting to be eased.

Many online users complained about the lack of street hygiene and accumulated rubbish in the city centre for attracting more rodents to the area.

In September last year the demand for pest control services rose tripled because of the rubbish crisis, The Guardian reported.

Facebook user ‘Roberto Fedeli’ said: ‘Seagulls are predators. In cities, instead of fish, they eat rodents.’

‘Giancarlo Giacometti’ commented: ‘Rome is finished. The seagulls are more effective than our authorities.’ 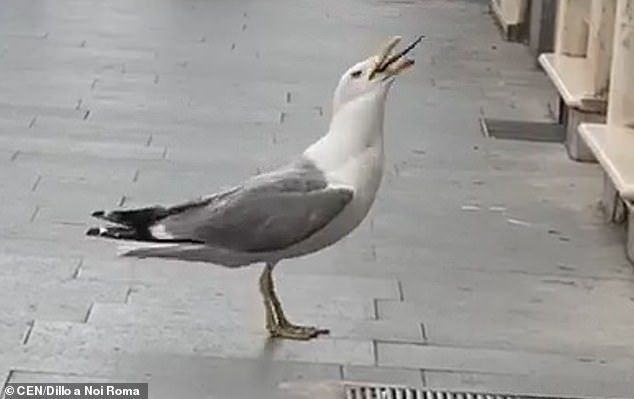 With only the rat’s tail visible from its mouth, the seagull flew off when somebody walks out of an entrance and appears to scare it