‘I was mugged by a seagull! Astonishing moment ‘cheeky’ bird swoops down to steal cod from mother’s fish and chips

A mother unintentionally captured the moment a seagull swooped down and stole the cod from her fish dinner.

Skye McGeachy, 23, was trying to take a picture of her fish to send to her father when the bird grabbed a chunk of it from her takeaway carton.

The seagull flew off with the piping-hot piece of fish Ms McGeachy had paid £5.40 for during a day at the beach in Lowestoft, Suffolk.

The seagull flew off with the piping-hot piece of fish Ms McGeachy had paid £5.40 for

Ms McGeachy, from Attleborough in Norfolk, said: ‘It felt like I was mugged by a seagull. I can’t believe how cheeky that bird was.’ 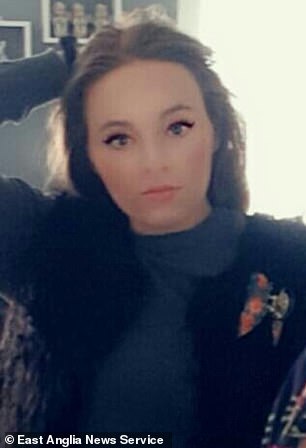 Skye McGeachy, 23, said the seagull flew off with her dinner in Lowestoft

She said she had spotted the seagull circling overhead as her two-year-old son Gerard-Swayley was eating his chips.

She added: ‘I bought the chips first for the children because it was going to take ten minutes for the fish to fry.

‘We had to scare away this bird which was loitering around the takeaway beside the beach while the kids were sharing their chips.

‘I was a little worried so I threw a couple of chips in the opposite direction to distract it.

‘But it was still hanging around when I went to buy my large piece of cod for £5.40.

‘It was really hot and straight out of the fryer so I thought it was a good time to take a picture to show my dad that we’d all had fish and chips on the beach.

‘I was taking the picture and at that very instant the crafty little bugger came down and tore off a large piece of cod.

‘You could see bits falling off as he flew away with the fish. I bet that it burned its beak because the fish was so hot.’

Ms McGeachy said she could not face eating the half portion left with and bought doughnuts for lunch instead.

But her daughter Summer, nine, said she did not mind and happily ate the remaining fish.