Comedian Peter Kay is laughing all the way to the bank. Who else could haul in £1 million while taking a year off?

That seemingly improbable feat has, I can disclose, just been pulled off by the Bolton-born comic of whom little has been seen since he abruptly cancelled a sell-out tour almost three years ago, citing ‘unforeseen family circumstances’.

Aside from a solitary BBC appearance in April, 47-year-old Kay has taken an extended break both from touring and media commitments.

But, far from having a negative effect on his bank balance, his absence from the public eye has seen the money continue to roll into Good Night Vienna Productions, the company he established in 1999.

Described as a ‘writing, performing and TV production’ business, its shareholder funds amounted to £24.8 million by the end of March this year – £1 million up on the previous year.

Peter Kay may have had a year off, but the money keeps rolling in after he pocketed £1million last year

His agent declines to comment but it is believed the money has been accrued through residual income derived from repeats of his many TV comedy shows.

There is no sign that Kay is burning through the cash.

Quite the reverse, in fact, as befits someone who achieved showbiz success only after taking a succession of low-paid jobs in such unglamorous arenas as a filling station and a factory manufacturing lavatory paper.

No less than £23.3 million of the company’s funds are held in ‘cash in bank and in hand’, while its only reported spending was limited to just £1,495 — on what is described in its accounts as ‘motor vehicles’.

Fans hoping that his most recent series, Peter Kay’s Car Share, will rise Phoenix-like from merely being a repeat, seem likely to be disappointed. 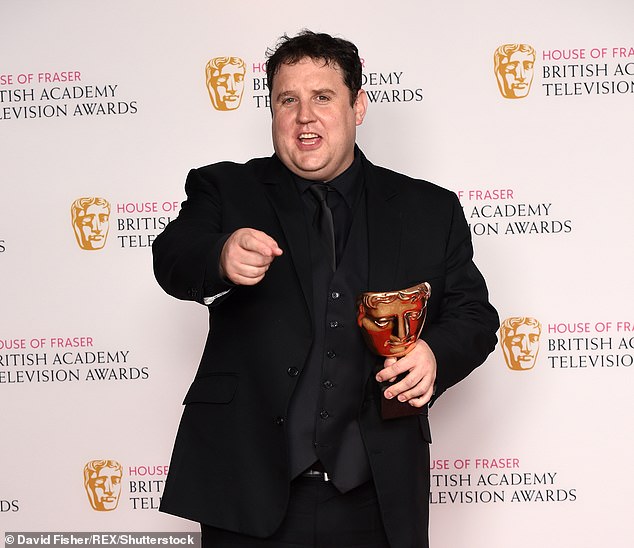 Despite the bumper earnings, Kay is not burning through the cash, in fact, he’s being pretty savvy with his savings

Kay, whose 2010-11 tour made it into the Guinness World Records after he performed to more than 1.2 million people, has always been adamant that his family comes first.

He and his wife, Susan, with whom he co-owns Good Night Vienna Productions, continue to live in Bolton with their three children. He remains teetotal — he lost his father, John, to alcoholism, before making the big time.

Rock legend Jimmy Page developed an early taste for public performance as a choir boy at St Barnabas in Epsom.

‘The church had a youth club where there’d be a dance and they’d play records. But to be in the youth club, you had to be in the choir. And I enjoyed being a choirboy, I really did.’

Any excuse to get dressed up.

Whiley’s wrinkles are a compliment

She knows plenty of wrinkly rockers, but Radio 2 star Jo Whiley is still worried about having a few lines in her own face.

‘I’ve lots of lines around my eyes,’ says the 55-year-old, who has four children with music executive Steve Morton.

‘My husband said to me: “You’ve just got to accept you laugh too much, and that’s the problem. And if that’s your biggest problem, then so be it.”

‘It’s true. That’s actually a very big compliment. I laugh a lot, and he makes me laugh.’

Fame in the genes for Lily Sheen

When Kate Beckinsale’s daughter turned 21 this year the actress gave her permission to have ‘a sip of alcohol for the first time’.

And young Lily Sheen has taken another big step into the adult world, having just landed her first major film role starring opposite Nicolas Cage in The Unbearable Weight Of Massive Talent. 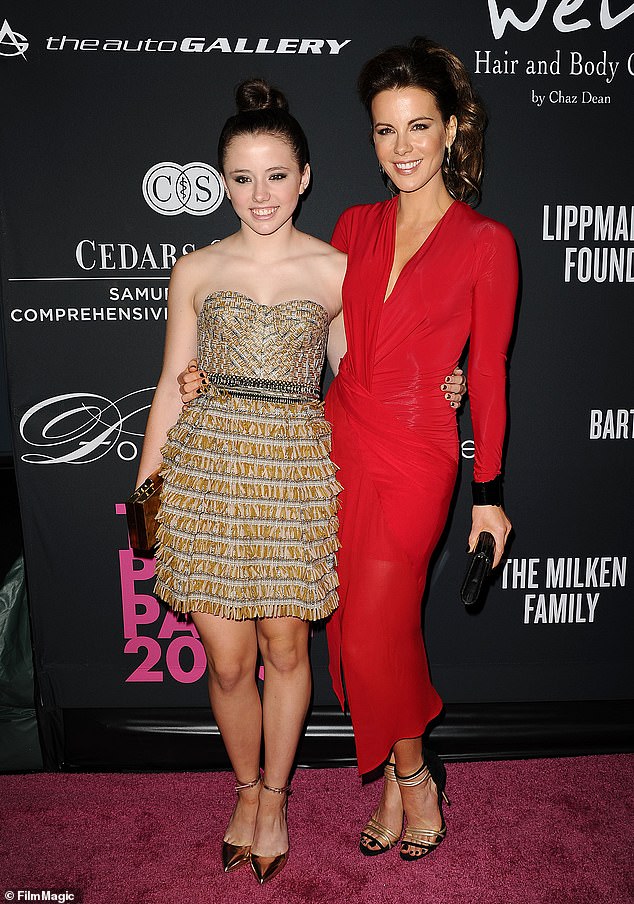 Looks like fame is in the genes for Lily Sheen, pictured with her mother Kate Beckinsale, after she landed her biggest role to date in The Unbearable Weight Of Massive Talent

The title almost sounds like it could be about her own family — her father is Welsh actor Michael Sheen, her maternal grandmother is actress Judy Loe and her grandfather was Richard Beckinsale, who starred in the legendary Seventies sitcoms Porridge and Rising Damp, but died in 1979 aged just 31.

It’s her first big role, but it will not be Lily’s first time on our film screens as she appeared in a number of her mother’s movies when she was a child including Underworld: Evolution, Click and Everybody’s Fine.

Coming from an acting dynasty surely helps with those lucky showbiz breaks.

Broadcaster Mariella Frostrup admits if she had met her human rights lawyer husband Jason McCue earlier in life she wouldn’t have given him a second glance.

‘I wouldn’t have noticed him, he was not my type, too functional and Anglo-Saxon,’ she says.

The mother-of-two, who caught the eye of George Clooney, pre-Amal, adds: ‘I went full throttle for dysfunction so I don’t think I would have fancied him. 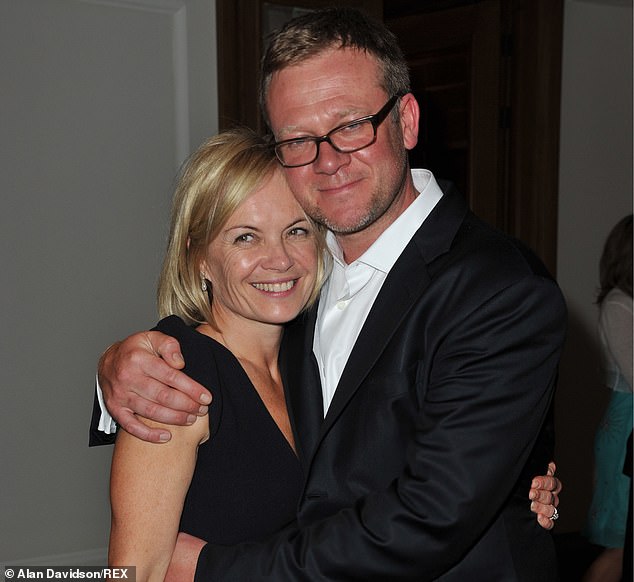 Broadcaster Mareilla Frostrup said husband Jason Mccue may not have always been her type, saying he was ‘too functional and Anglo-Saxon’

‘I was lucky to have met him when I did. If you want a long marriage, separate toilets is essential.’

The next James Bond film No Time To Die has been put back again — as has who will be Daniel Craig’s successor, according to producer Barbara Broccoli.

‘I always say: You can only be in love with one person at a time,’ she says.

‘Once the film’s out, we’ll have to get on to the business of the future. But for now, we can’t think beyond Daniel. Bond doesn’t need to be a white man. Not as far as I’m concerned.’

She says she is frustrated at the way women are treated as they get older and fed up at having to thank people who say she has ‘still got it’.

So Dame Kristin Scott Thomas, 60, should approve of her portrayal in Netflix’s new big budget adaptation of Daphne du Maurier’s Rebecca, in which she plays chilly housekeeper Mrs Danvers. 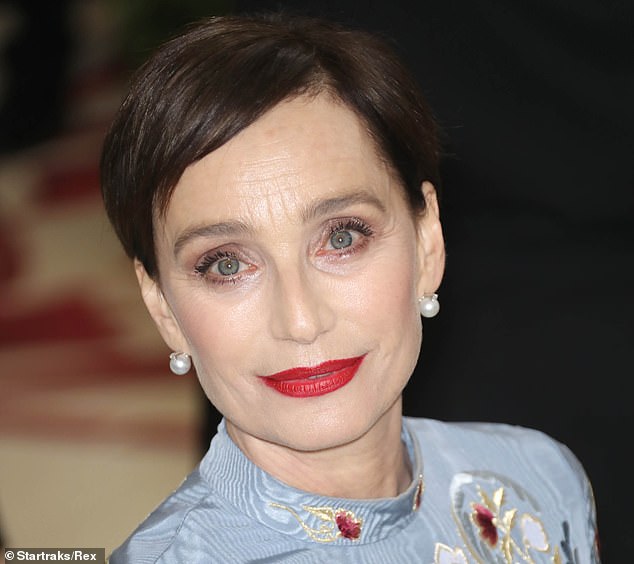 Dame Kristin Scott Thomas, 60, says she has made her portrayal of housekeeper Mrs Danvers in Netflix film Rebecca, have a ‘slightly dominatrix-like vibe’

‘I wanted to make Danvers look stylish and sexy but in an intimidating and predatory way, giving her a slightly dominatrix-like vibe,’ says the film’s costume designer Julian Day. ‘The skirt is a touch too tight, the heels a bit too high.’

May to be a dame – in San Marino

Former Prime Minister Theresa May acquired a new title when her husband Sir Philip was knighted.

Now Lady May has another gong to add to her collection.

She will travel this weekend to San Marino via Italy to be made a Dame of the Grand Cross of the Equestrian Order of St Agatha.

Contrary to its high-falutin’ name, the award has nothing to do with horseback skills — or her ability to plough through fields of wheat.

San Marino honorary consul Maurizio Bragagni says: ‘This is recognition for her work as a politician, for achievements such as the introduction of the Modern Slavery Act, but also for great support during the Covid-19 pandemic where she has spoken out for small countries like San Marino.’

A spirited spat has erupted after author Roger Clarke claimed the BBC ‘stole’ the title of his book A Natural History Of Ghosts for a new Radio 4 series.

The film writer — raised in a haunted house — contacted its presenter Kirsty Logan who claimed to be unaware of his work.

He pointed out she had praised his book when it was published in 2016.

The BBC has so far adopted an eerie silence.