He was awarded the Nobel Prize for literature and wrote If, which remains among the nation’s favourite poems.

But Rudyard Kipling’s accomplishments appear to count for little in 21st-century Britain.

Less than a month after I disclosed that the BBC had expunged another of his most celebrated poems, Mandalay, from its commemoration of the 75th anniversary of VJ Day, I can reveal that Kipling has fallen out of favour at the Dragon, the famous £31,686-a-year Oxford prep school.

The Dragon, whose alumni include Harry Potter star Emma Watson and Hugh Laurie, has decided that the senior boys’ boarding house — named Gunga Din for more than 80 years — will henceforth be known as Dragon House, because, it says: ‘ “Gunga” has now become derogatory, and even used as a racial slur.’

Explaining the decision, the governors acknowledge that the original name ‘comes from the eponymous poem by Rudyard Kipling’ telling the story of Gunga Din, an Indian ‘bhishti’ or water-carrier.

The Dragon School in Oxford has renamed  senior boys’ boarding house from Gunga Din, amid concern the name has been used as a racial slur

Despite being insulted, maligned and mistreated, the governors say, Gunga Din remains faithful to those he serves and dies while attempting to save the English soldier who narrates the poem and who says in its final line: ‘You’re a better man than I am, Gunga Din!’

Emphasising that the name Gunga Din was originally chosen ‘to highlight the higher ideals of equality, fairness and human dignity’, the governors add that ‘these align with today’s core Dragon values of kindness, courage and respect’.

But, claiming that ‘Gunga’ has now become derogatory, the governors add that ‘such potentially offensive language is against the Dragon’s ethos of inclusivity and diversity’, and, therefore, ‘is no longer appropriate’.

Saira Uppal, the Dragon’s director of development and external relations, tells me: ‘The change is not in response to any comment or complaint,’ but explains: ‘We are responsive to sensitivities which exist today.’ 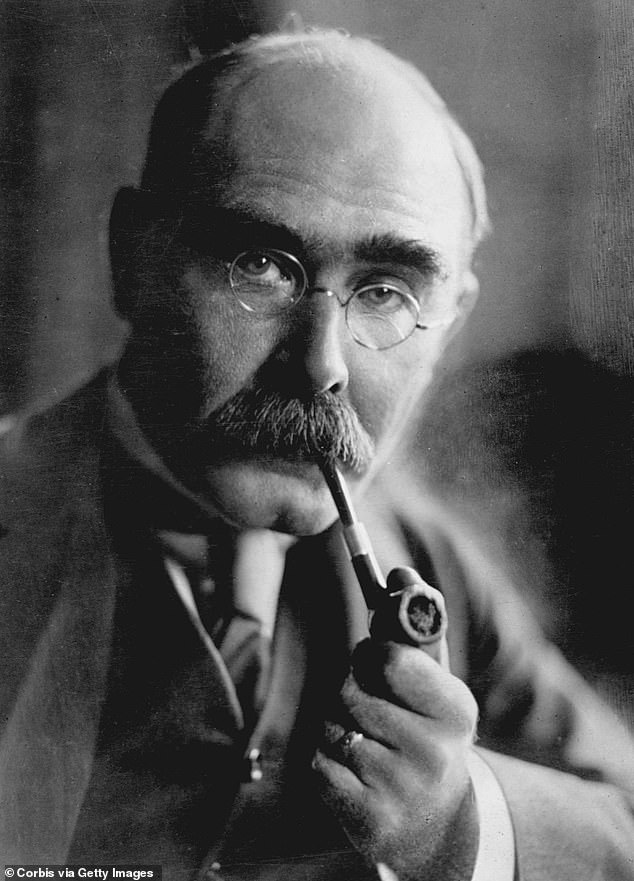 Rudyard Kipling’s accomplishments appear to count for little in 21st-century Britain – but one furious former pupil has written to the Dragon to discuss their personal ‘outrage,’ at the decision

One furious former pupil wrote to the school to express their ‘utter outrage at the craven and absurd decision’ to rename the boarding house.

‘This decision has let down generations of Dragons. ‘It has made me ashamed to call myself an OD and I never thought I would say that.’ Kipling biographer Andrew Lycett, who knows of ‘no evidence that Gunga is used as a racial slur’, tells me that, despite the name change, he hopes pupils continue to study the author and the poem.

She may be the world’s highest-paid actress but Scarlett Johansson is still a sensitive soul.

‘It’s such a funny, weird job,’ the Marriage Story star says of acting, ‘where you can meet somebody for the first time in a play rehearsal — and a day and a half later you’re screaming and sobbing at each other, and holding each other, and you have snot dripping down your face, and you’ve exposed the whole fragility of your child self.’

Why hotels heiress Irene is not just a pretty face

Beauty is only skin deep, but Irene Forte has proved she’s not just a pretty face.

The hotels heiress, who has worked for her father Sir Rocco Forte’s empire for the past nine years, is now expanding her eponymous skincare range which she set up in 2018 outside of the family business. 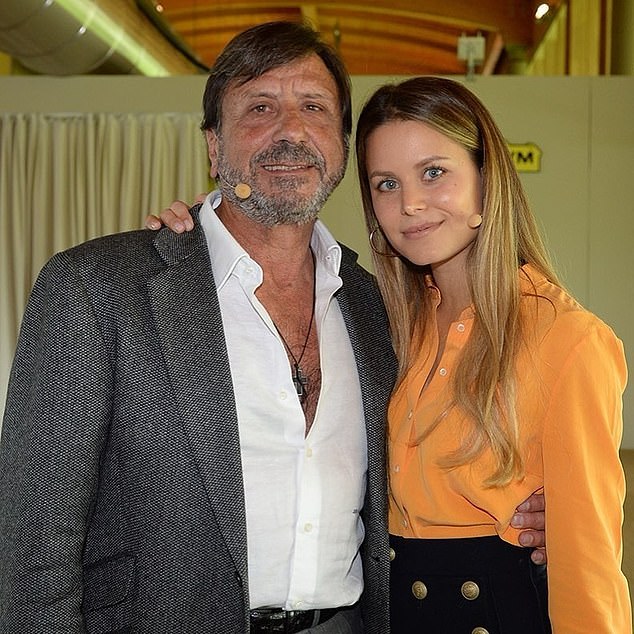 Hotel heiress Irene Forte (right) has has worked for her father, Sir Rocco Forte’s (left), empire for the past nine years.

The 31-year-old reveals: ‘Doing my own thing has been one of the most difficult parts of family business,’ says Irene.

‘My father would have probably preferred that I focused on something within the hotels rather than launching a skincare line. However, he has understood that I’m very entrepreneurial. I’m not good at sitting in one role.’

Sir Rocco is a fan of her £99 age-defying Prickly Pear Body Cream — ‘he started using it during lockdown and is enjoying that,’ says Irene.

Prime Suspect writer Lynda La Plante confesses how some of her fans confuse her fictional crime creations with reality.

‘Once, when I was signing a Jane Tennison book, this woman came up to me in a fury. She was cross because a character she liked — the detective in Cold Heart — had died. I said, “Look, I am so sorry, I am going to give you this book for free”, and she replied, “I don’t want it, I want that character to live.”’

‘At a Women of the Year lunch, I was plonked on a podium to have my photograph taken with Theresa May,’ recalls the famously mischievous Nightingale.

‘By way of playful but friendly introduction, I said, “Has anyone ever asked you before if you’re related to Lady Gaga?” ‘She really did not know how to react. ‘On a subsequent occasion she looked at me with what I took to be, “Oh no not her again.”

‘It might have been my imagination, but her expression seemed to say, “Oh no, what’s she doing here?”’

Can anyone blame Mrs May?

First Lady of Longleat roars back into style 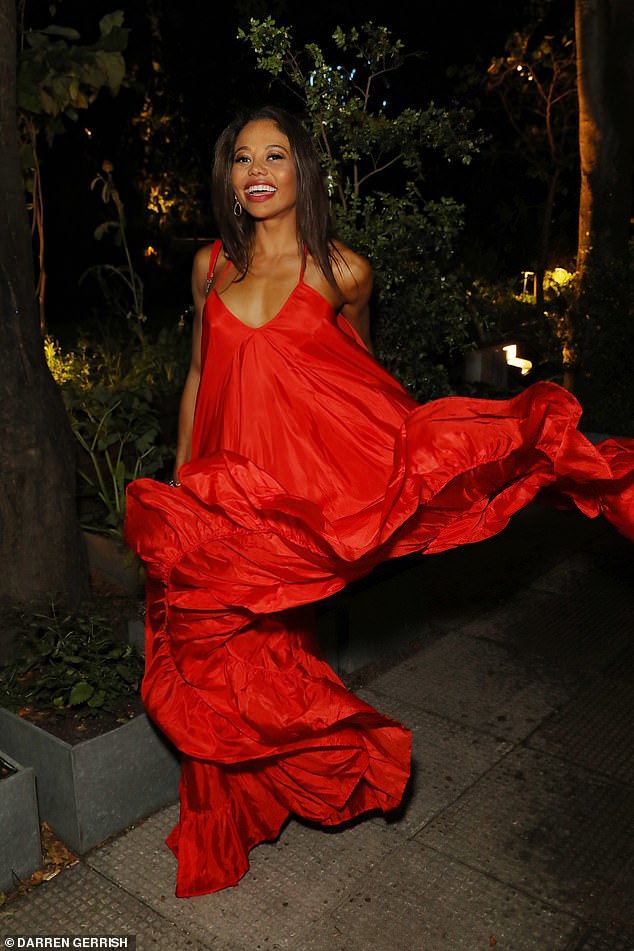 Emma Thynn, First Lady of Longleat and 2019 Strictly star made her first return to the party fray this week in dazzling style

It’s not just Longleat Safari Park that has roared back to life after lockdown.

First Lady of Longleat and 2019 Strictly star the Marchioness of Bath made her first return to the party fray this week in dazzling style.

Emma Thynn pulled out all the stops wearing a £700 Kalita red gown for a dinner hosted by the designer Kalita Al-Swaidi a t The River Cafe in Hammersmith.

The mother-of-two, who was joined by Luther star Idris Elba’s wife, Sabrina, joked that it was the first time she had put on a dress and make-up ‘in 7,891,224 days’

‘Years ago Ricky Gervais did an interview with some magazine and when they asked him what his TV turn-off was, he said, “When Darren Day sings”.

‘So I never watched any of his stuff after that.

‘But during lockdown we watched [Gervais’s] After Life and Derek. And d’you know what? He’s really good. I put out a tweet saying how much I enjoyed them, and he got straight back to me.

‘He sent me a message saying he never said that in an interview. So we made up in the end.’ 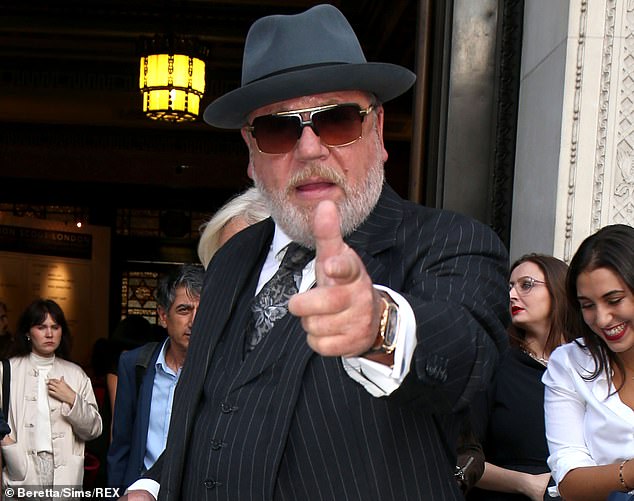 ‘All you mob pretending to be me, in the past, you can jog on now,’ he says in his inaugural post. ‘I mean you don’t mean no harm — except for the geezer who asked for some bitcoins, which I think was a f****** liberty.

‘But if you fancy having a rabbit about sport, football, boxing… even cricket … whatever you want to have a chat about, I’m here!

‘If you want to talk about films I don’t mind doing that either.’

It’s a huge U-turn for the Sexy Beast star who previously declared: ‘I don’t do Facebook, I don’t twit-tw*ttwot whatever it’s called.

‘Why the f*** would anyone want to talk to someone they’d never met before?

‘If I haven’t got enough mates by now, I’m in trouble.’

Growing old is clearly not on Fearne Cotton’s bucket list.

The TV presenter, who turned 39 yesterday, has made a series of birthday pledges.

‘I won’t let anyone dim my light. I will keep dying my hair pink. I will dress as I always have. I will keep loving with my whole heart.

Chef Jasmine has a bun in the oven

TV chef and author Jasmine Hemsley is delighted to see her waistline expanding — and it has nothing to do with over-indulging during lockdown. 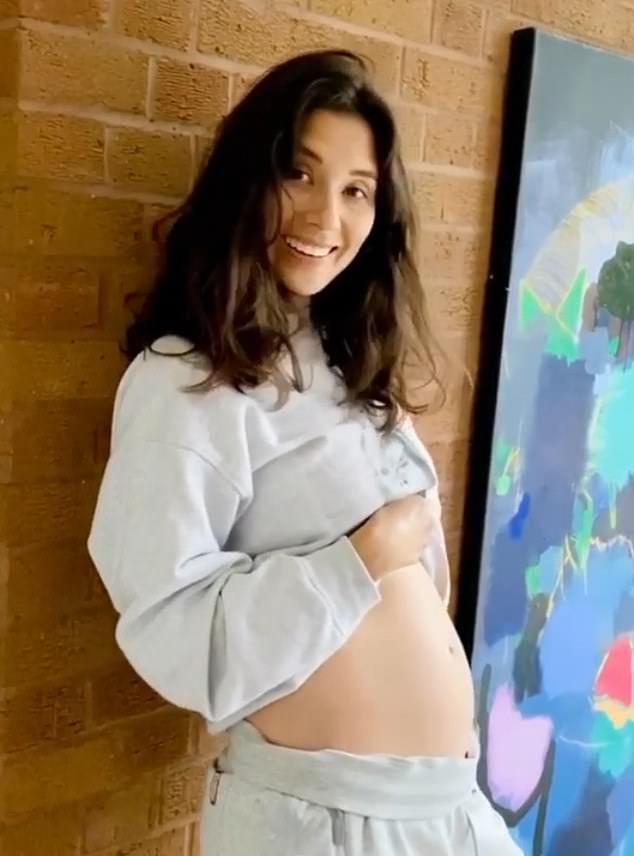 TV chef and author Jasmine Hemsley, 40, has revealed she is pregnant with her first child

The 40-year-old reveals she is pregnant with her first child, and confirmed the happy news with a picture of herself lifting up her jumper to show the blossoming bump. ‘Baby on board,’ she captioned it.

Jasmine is engaged to photographer Nick ­Hopper, who does imagery for her and her sister, Melissa, with whom she set up the wellness brand, Hemsley+Hemsley.

Their cafe of the same name in Selfridges, London, is a favourite of Princess Eugenie.