Ordered to pay his ex-wife a £60 million divorce settlement in a High Court ruling made public only last week, businessman Bhanu Choudhrie is putting his depleted bank account behind him in splendid style.

The 41-year-old son of billionaire Sudhir Choudhrie has, I can disclose, embarked on a fresh romantic adventure with Tamara Ralph, co-founder of London fashion house Ralph & Russo and designer of the transparent £55,950 dress which Meghan Markle wore for her engagement photographs.

‘Bhanu was in the front row when Tamara was over in France for Paris Fashion Week,’ a friend tells me, explaining that the couple’s relationship began to flourish before lockdown was imposed. 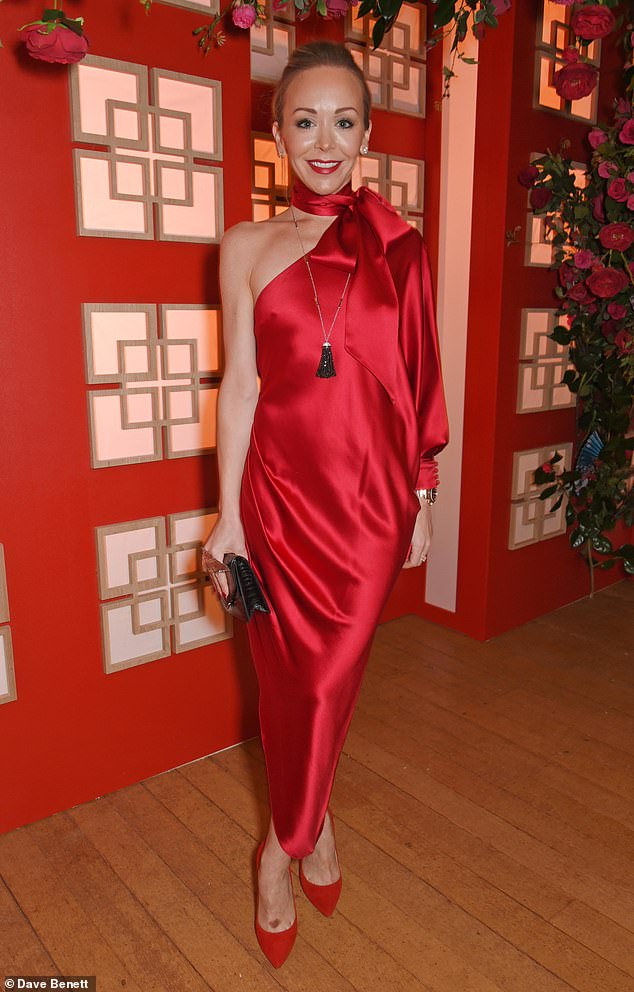 Tamara, 38, who until two years ago was routinely called the fiancee of business partner Michael Russo, also remains silent.

But it is surely a welcome development in both their lives — especially Bhanu’s, perhaps.

He and ex-wife Simrin appeared to have it all, living with their son in a sumptuous, six-storey, £20 million house in the same Belgravia square as Lord and Lady Lloyd-Webber.

When Simrin appeared on Channel 4’s Secret Millionaire, one critic remarked that she was ‘so obscenely rich’ she made ‘other millionaires look like hobos’. 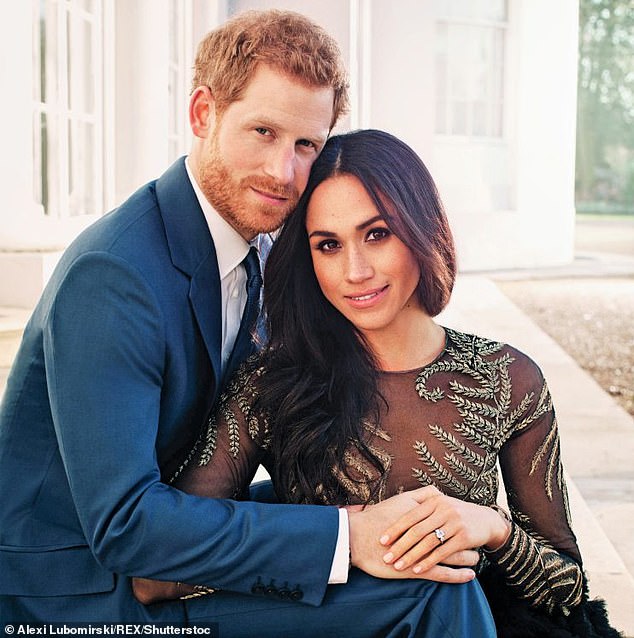 Later, however, Bhanu and his father, who have donated £1.6 million to the Lib Dems, were questioned by the Serious Fraud Office in a probe into bribes allegedly paid by Rolls-Royce in relation to a defence contract in India.

Neither father nor son was charged. But Bhanu later took legal action intended to prevent Simrin from disclosing ‘pillow talk’ business information — a case that was struck out after her lawyers offered assurances she would not pass on the information.

Tamara will surely inspire him only to murmur sweet nothings. One fashionista swooned at her ‘crepe de chine pussy-bow blouse’, as well as her ‘Milky Way of diamonds’. Perhaps Bhanu will slip her another?

Jagger’s boy from Brazil is a cover star 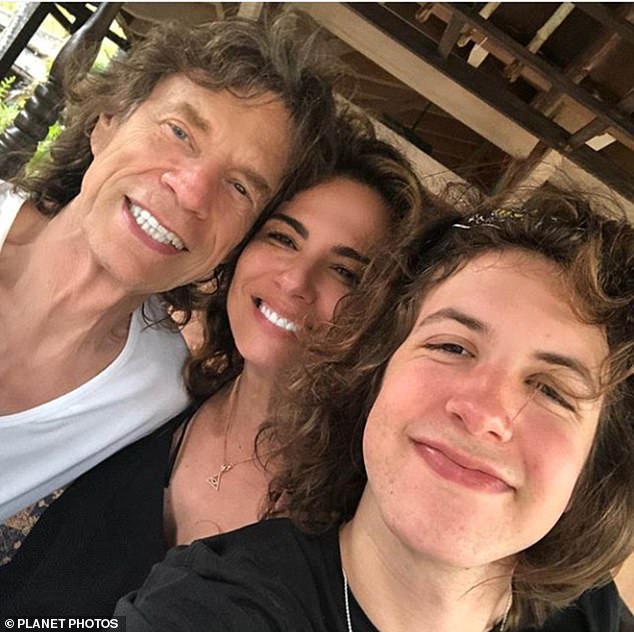 Father of eight Sir Mick Jagger is celebrating this week as his second youngest child reaches a milestone.

To mark the occasion, Luciana (pictured with Sir Mick and Lucas) gushed online: ‘You are the most loved person in this entire world. Funny, witty, honest, a companion. You can always count on me!’

Although Sir Mick, 76, cannot see Lucas in person due to lockdown, he took part in a video conference call for his birthday along with his girlfriend, ballerina Melanie Hamrick.

Lucas, who studies photography in New York and is self-isolating in Brazil with his mother, shared a faux magazine cover on which he stars — with nails painted red — under the title: ‘Not A Teen’. 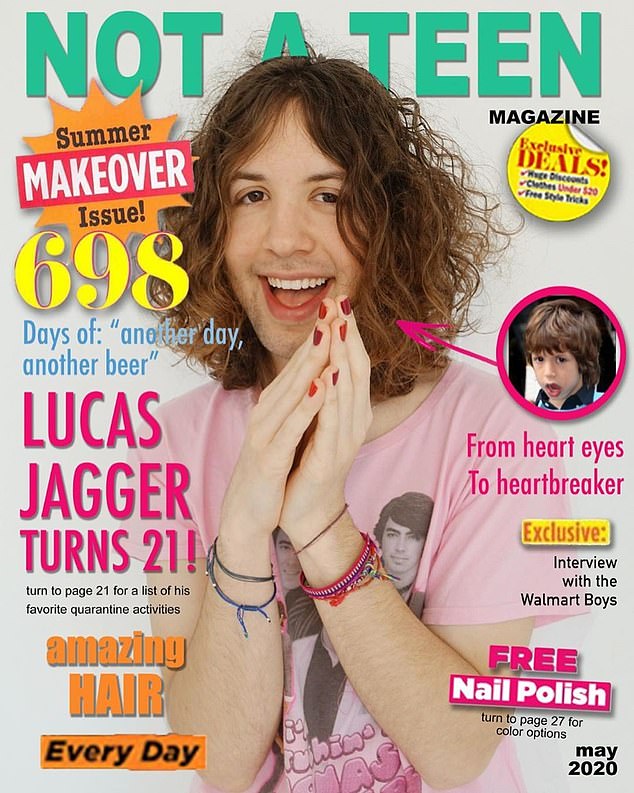 Lucas, who studies photography in New York and is self-isolating in Brazil with his mother, shared a faux magazine cover on which he stars

Why TV crime-fighter Ted faces a battle of the bulge

Expect the thin blue line to be a whole lot thicker when hit BBC crime drama Line Of Duty returns.

Adrian Dunbar, who became an unlikely sex symbol as Superintendent Ted Hastings, admits he’s piled on the pounds during lockdown.

‘I’ve become quite obsessive about gardening; cooking and food, too,’ says the actor, 61. ‘“What will we eat tonight?”’ becomes the most important question of the day. When we do start filming again, I may well have put on weight…’ Dunbar’s wife of 34 years, the actress Anna Nygh, is unimpressed by his new heartthrob status. ‘She thinks it’s a bit of a laugh,’ he says.

‘You’ve got to be flattered, it’s great. I think women have responded so much to Ted because they all realise they could have him round their little finger within 20 minutes.’

McGregor’s cat keeps its kit on… 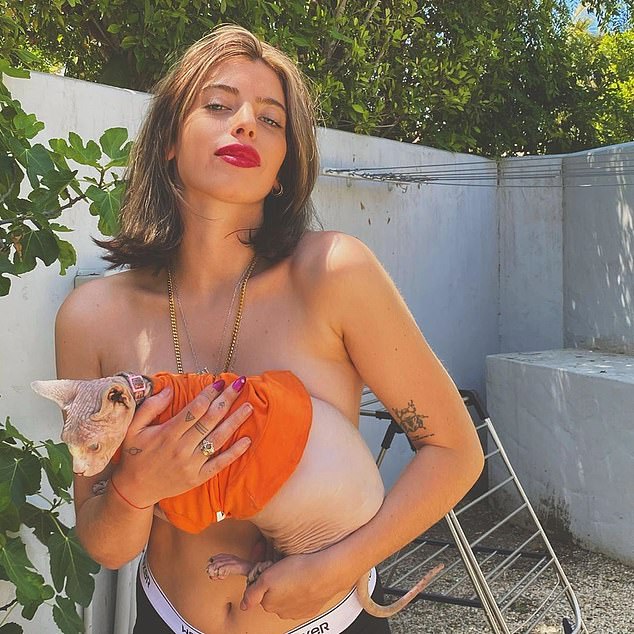 It’s not often that pets are better dressed than their owners, but Ewan McGregor’s daughter, Clara, was outshone when she posed with her £1,000 hairless Sphynx cat at home in LA.

The 24-year-old actress, whose mother is Ewan’s estranged wife, Eve Mavrakis, held the cat in her tattooed arms while wearing nothing on her upper half.

By contrast, her feline friend Azure covered up in an orange shirt.

‘The cat thought she could go outside with no top on! I thought we’d raised her better,’ Clara joked.

Please take my kids back, begs a frazzled Fox

Lewis star Laurence Fox had something of a chequered education, having claimed to have been expelled from £41,775-a-year Harrow School for sexual misbehaviour.

But the outspoken actor declares lockdown has given him renewed esteem for educators. ‘I’ve been homeschooling kids which has shown me that I’ve probably got a newfound respect for teachers and their patience,’ he says.

Not surprisingly, Fox, who has two sons with ex-wife Billie Piper — Eugene, eight, and Winston, 11 — is keen for schools to reopen.

‘Please take them back to school,’ he says of his children. ‘Help us out!’

Actresses are taken more seriously in Hollywood since the #MeToo Harvey Weinstein scandal, says Reese Witherspoon. ‘Every woman that I’ve been working with in the past three years — whether it’s Nicole Kidman or Jennifer Aniston — we’ve all remarked about how much things have changed. We’ve all noticed how we are now put into a position of respect for our ideas.’