Lewis Hamilton’s Mercedes team threw away victory at the Australian Grand Prix with a massive miscalculation that handed Sebastian Vettel the opening-day win.

Hamilton, who finished second, had been in charge after a clean get-away from pole and a smooth first half of the race before the random intervention of a virtual safety car (VSC), brought about by Romain Grosjean’s Haas pulling up at the side of the track.

At this point, midway through the race, Vettel came in to be reshod. His lead over Hamilton, who had already stopped for his change of rubber, was only 11 seconds. 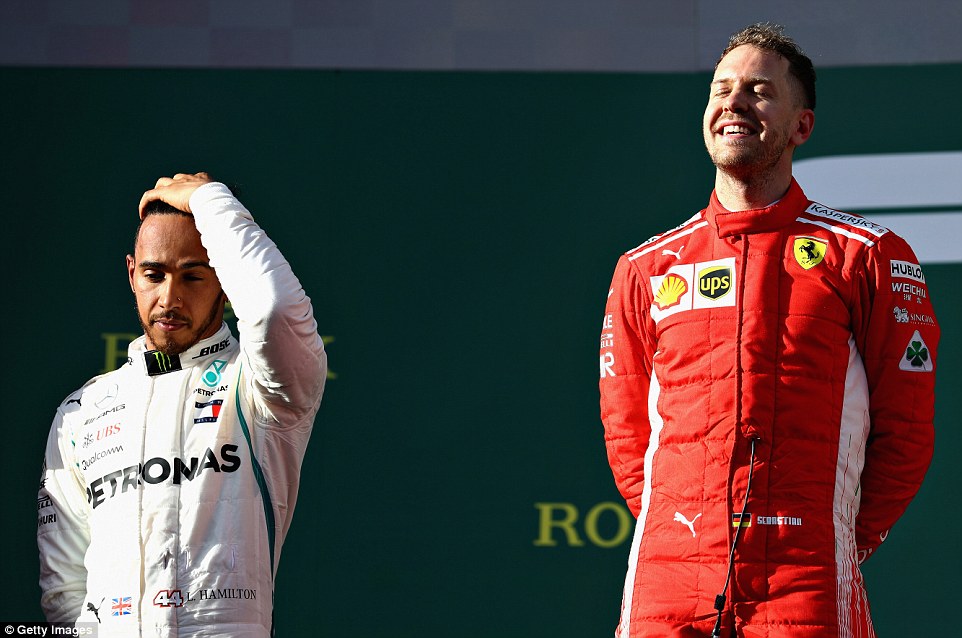 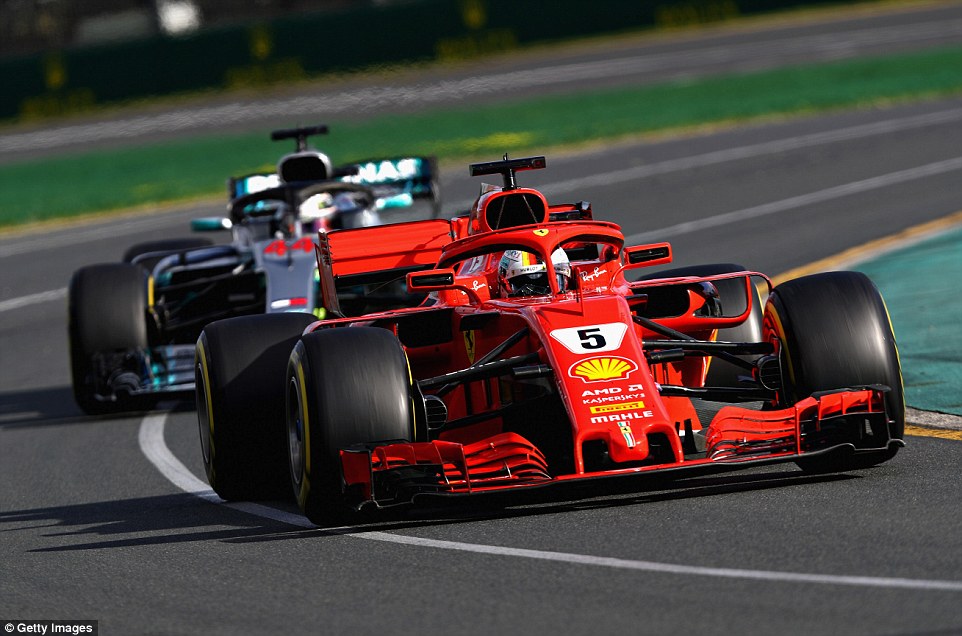 Vettel overtook pole-sitter Hamilton midway through the Australian Grand Prix, resulting in a superb race to the finish 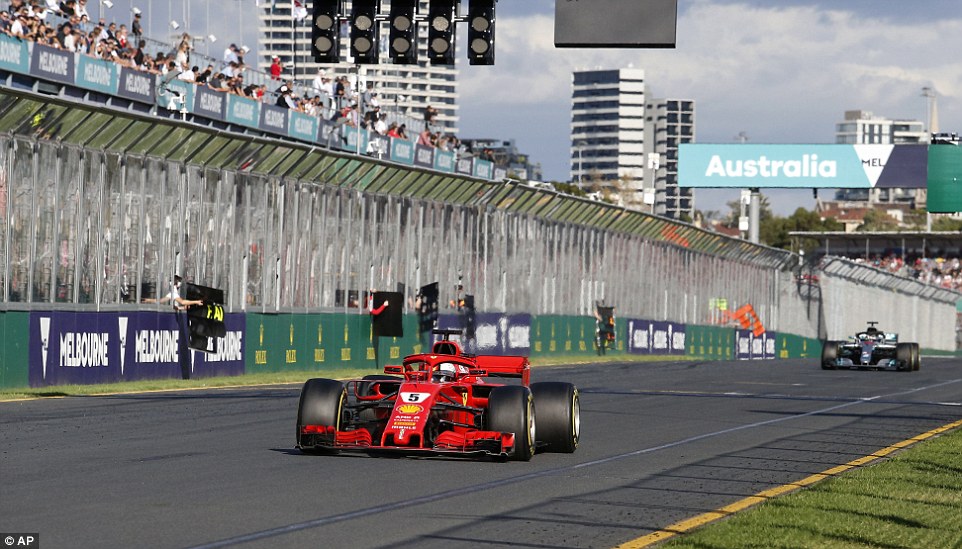 Vettel managed to extend his advantage and won the opening race of the F1 season, with Hamilton left in second place 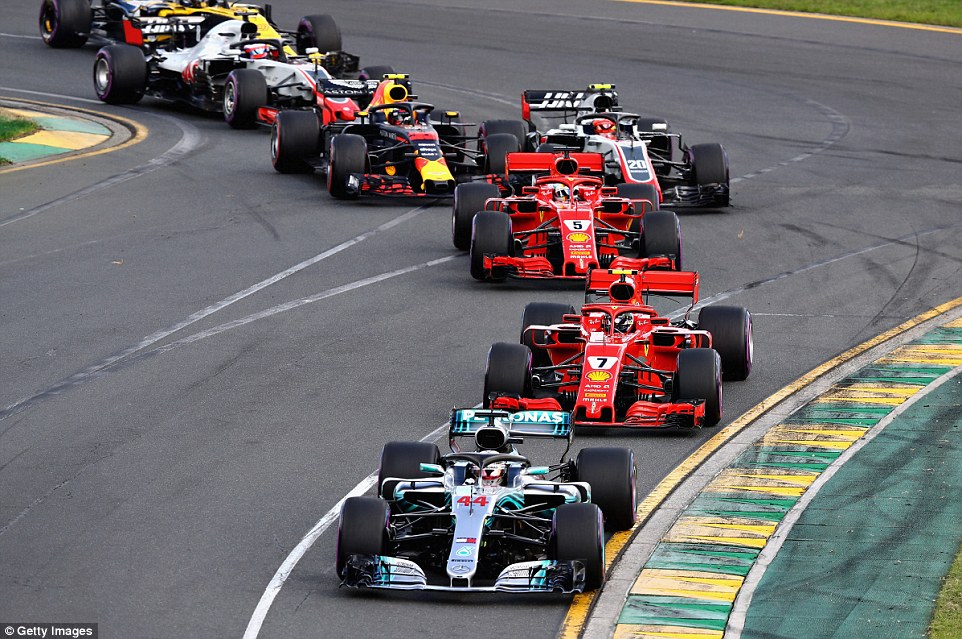 Hamilton was on pole and got away cleanly, however confusion over the VSC allowed Vettel to sneak ahead via a pit stop 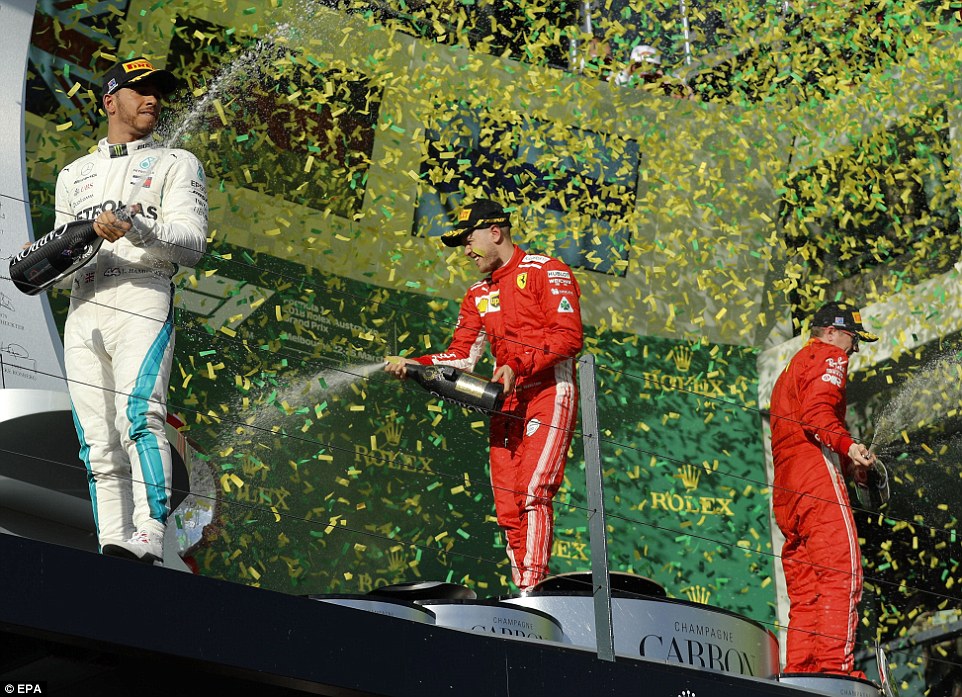 The podium placers spray champagne after an exciting race, hopefully an indicator of things to come in the 2018 season

It should not have been a big enough margin for the German to get in and out of the pits and back in front, but with the VSC deployed, Hamilton had to slow down to the mandatory limited lap time. It allowed Vettel to emerge in front.

Hamilton was nonplussed, little realising he had been cruising for a bruising, when – seemingly – he should earlier have been pressing harder to put himself in a position that would have allowed him to remain in front in the event of a VSC being called.

‘What just happened, guys?’ asked Hamilton. ‘Why did you not tell me Vettel was in the pits?’ ‘We’re just reviewing,’ came the response. Later, Mercedes told him: ‘We thought we were safe. There is obviously something wrong.’ 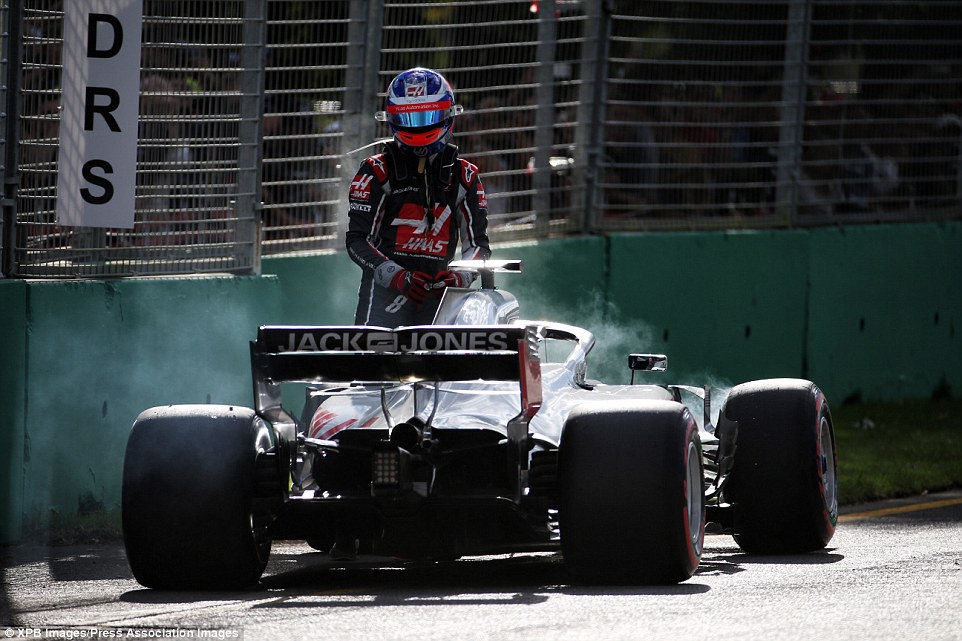 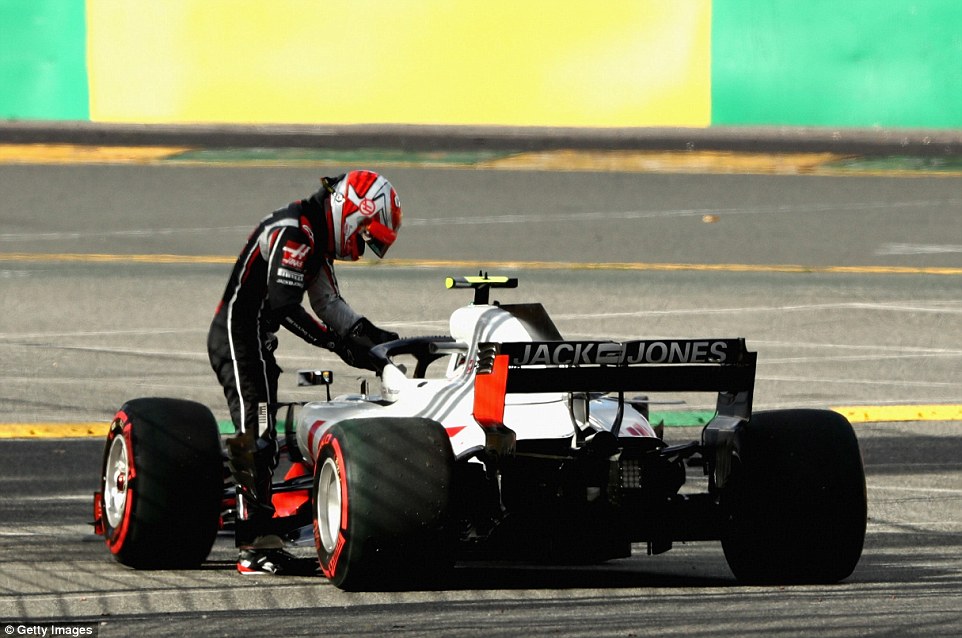 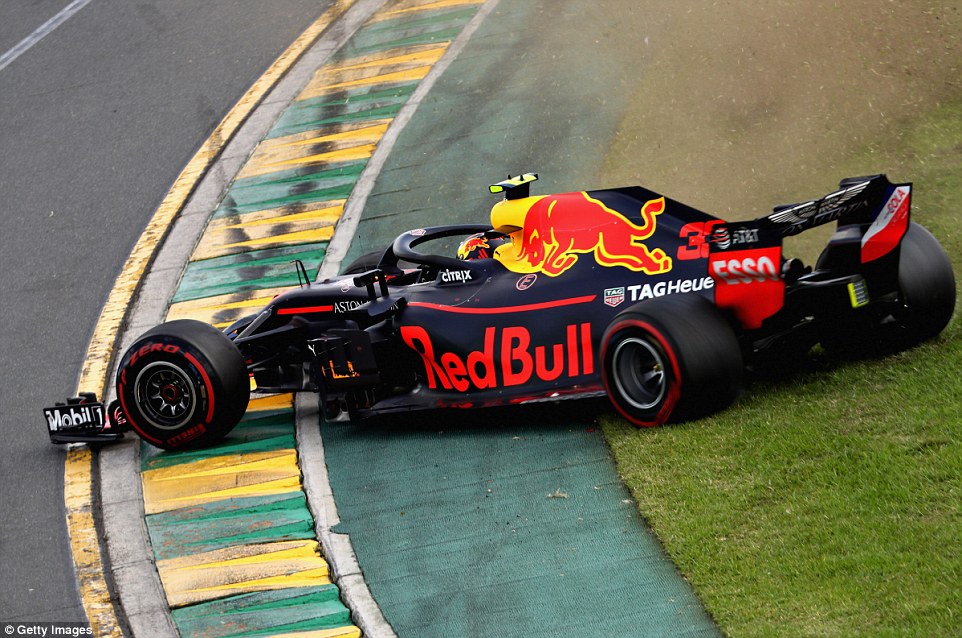 Max Verstappen had a bad race, spinning out after being overtaken for fourth by Magnussen in the opening stages

The other possible explanation – as I write this before Mercedes have commented on the situation – is that Hamilton did not drive to the limit of the prescribed VSC time, but that would seem a strange scenario.

The safety car, which followed the VSC, was withdrawn with 27 laps remaining. Hamilton was right on Vettel’s tail but passing here is close to impossible. With 12 laps remaining, the Brit said he was ‘going for it’. We held our breath.

He pushed too hard, locked up and ran on to the grass. His deficit, always around or under one second, slipped back to nearer three. Race over, though Hamilton got relatively close to his red prey later on, only to make another mistake. The final victory margin was five seconds, but Hamilton had given up by the end. 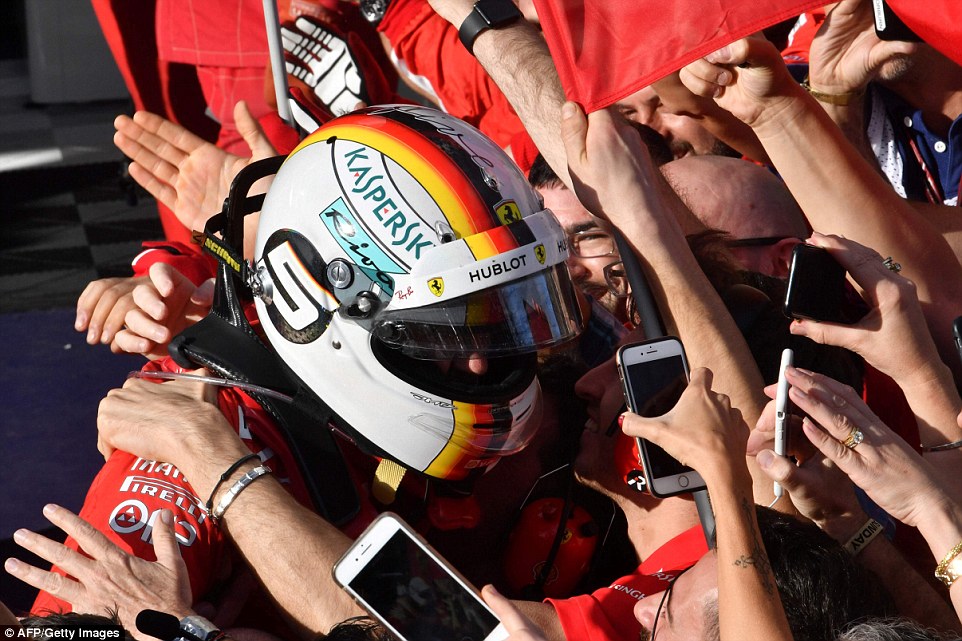 It was an awful day for Mercedes, whose pace had suggested they should have won with something to spare, even if Ferrari were closer to them on pure pace than most people suggested. Kimi Raikkonen’s third place gave the Scuderia the early lead in the constructors’ table.

Daniel Ricciardo had a decent day in so much as he beat his more heralded Red Bull team-mate Max Verstappen, who spun off trying to overtake Haas’ Kevin Magnussen. Ricciardo was fourth and Verstappen, who recovered from his off-road excursion, sixth.

Magnussen and Grosjean both came to a halt after pit-stop mistakes apparently relating to their front left tyres. A wheel gun problem? The stewards called them in to get some answers. McLaren’s Fernando Alonso was fifth, a decent showing, with Stoffel Vandoorne ninth.