Firefighters are continuing to tackle a huge wildfire blaze – which is thought to have been caused by a barbecue.

Crews from West Yorkshire and Greater Manchester were called to on Marsden Moor, near Saddleworth, on Sunday night to tackle the burning glassland.

But on Monday morning the fire was continuing to burn amid another day of soaring temperatures, with firefighters and the National Trust planning to review the situation as ‘flare ups’ continued.

Fire crews were called to Marsden Moor, near Saddleworth, after a barbecue was believed to have started the huge blaze

Updating nearby residents last night, Marsden Moor National Trust confirmed that the blaze had been caused by a BBQ near Easter Gate.

‘Helicopter on standby. This fire was caused by people using a BBQ at Easter Gate!’

Beginning yesterday evening, firefighters battled through the night in a bid to contain the flames, which have caused an estimated £200,000 worth of damage. 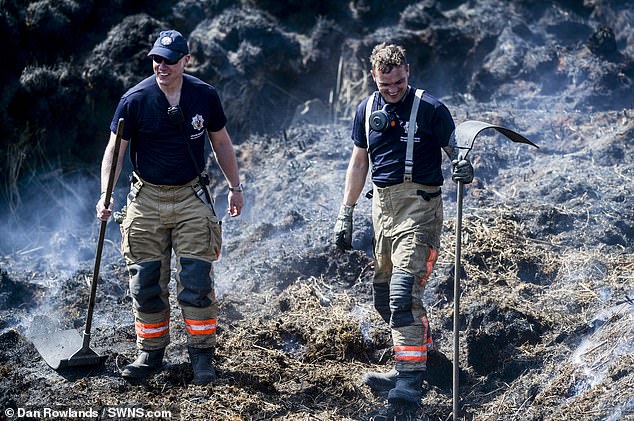 In a shocking statement, police confirmed they had confiscated a further five barbecues from people near Dovestones on Easter Sunday.

Last week marshals had to extinguish a barbecue which had become ‘out of control’ at the beauty spot.

A helicopter is has been spotted dropping water from a nearby reservoir on to the scorched earth near Marsden.

A trust spokesman said: ‘At present it is estimated that an investment of more than £200,000 in restoring this special habitat has been lost.

‘The deployment of the helicopter itself costs the National Trust, a conservation charity, £2,000 per hour.’

Craig Best, lead ranger for the National Trust at Marsden Moor, said: ‘We would really encourage everyone please not to enter the moorland, go for a walk, have a picnic on the moorland with a barbecue and we would especially request that people extinguish cigarettes.’

This was the sixth fire on Marsden Moor this year and National Trust officials set to meet fire officials this week to discuss the situation.

There are currently eleven crews from West Yorkshire and Greater Manchester fire services on the moorland, which is designated as a Site of Special Scientific Interest, a Special Protection Area and Special Area of Conservation.

West Yorkshire fire crews also remain on Ilkley Moor to battle another fire which started on Saturday and had spread to over 25,000 square metres of moorland.

Three men aged 19, 23 and 24 have been arrested in connection with the fire and remain in custody.