A second Miss America executive has resigned over a vulgar email chain in which bosses slut-shamed competitors, called them fat and made fun of their sex lives.

On Saturday, The Huffington Post revealed that Josh Randle, the president of the Miss America Organization, had resigned.

It follows the resignation of Tammy Haddad and the suspension of Sam Haskell, two other executives, who made the remarks over email exchanges.

They were exposed on Friday as former winners Gretchen Carlson and Mallory Hagan, along with 47 other former competitors and winners, signed an open letter demanding they step down.

The Huffington Post reported on Thursday that Haskell regularly exchanged expletive-ridden emails in which he or others slut-shamed and name-called former title winners things such as ‘c**ts’, ‘piles of malcontents’ and ‘blimps’, to name a few.

Josh Randle, the President of the Miss America Organization, has resigned over the emails

Three former Miss Americas who were attacked and mocked in the leaked messages were joined by nearly four dozen other title holders earlier Friday in calling on Haskell and other organization leaders to resign in the wake of the scandal.

Later Friday, the Miss America Organization Board of Directors revealed they voted in favor of the 62-year-old’s suspension.

‘The Miss America Organization Board of Directors today voted to suspend Executive Chairman and CEO Sam Haskell. Mr. Haskell, in support of the organization, has agreed to abide by the Board’s decision,’ a spokesperson confirmed to the Hollywood Reporter.

‘The Board will be conducting an in-depth investigation into alleged inappropriate communications and the nature in which they were obtained. In addition, the Board wishes to reaffirm our commitment to the education and empowerment of young women, supporting them in every way possible.’ 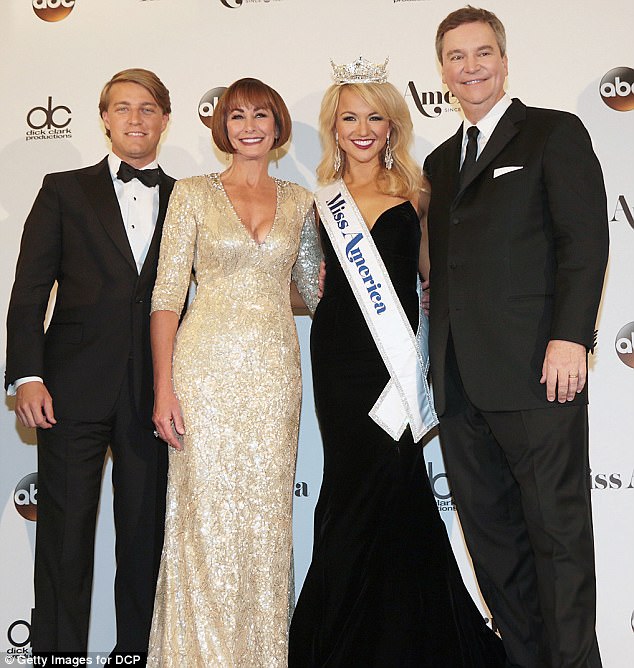 Randle (left) resigned a day after Miss America CEO Sam Haskell (right) was suspended over vulgar and sexist emails which they exchanged about former contestants. They are seen in September 2016 with Lynn Weidner and Savvy Shields 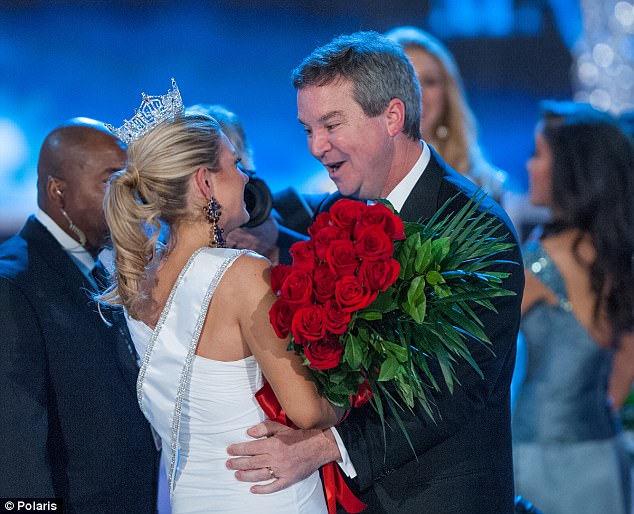 Haskell with Mallory Hagan, one of the winners he fat-shamed in the emails, in 2013

In it, Barth called the emails by Haskell and others ‘despicable’ and faulted officials who ‘sat by without objection while such derisive comments were passed around.’ 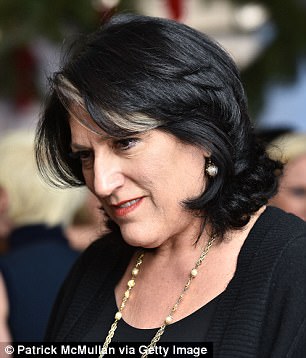 In the messages, which the paper says it received from two sources, the CEO frequently used shocking and sexually-explicit terms to refer to contestants, including 2013 winner Mallory Hagan and Gretchen Carlson, the former Fox News host who won the pageant in 1989.

Hagan’s weight gain and allegedly promiscuous sex life were derided in the correspondence in harsh terms.

‘My hope is that this story that broke will bring light to the type of behavior that’s been in leadership of the Miss America Organization and really help us put in place some people who care and who embody the mission of Miss America,’ Hagan said. ‘Having somebody bully you, demean you, degrade you in any way is not OK.’ 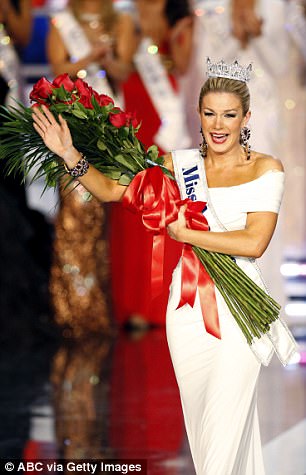 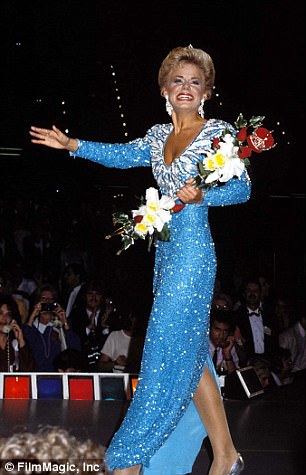 In the emails, Haskell frequently used shocking and sexually-charged terms to refer to contestants, including 2013 winner Mallory Hagan (left) and Gretchen Carlson (right), the ex-Fox News anchor who won the pageant in 1989

A CALL TO RESIGN: The petition signed by 49 Miss Americas 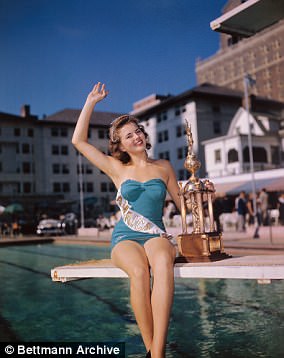 We, the undersigned Miss Americas, represent decades of the powerful history and legacy of the Miss America Organization in the near-century of its existence. We are deeply disturbed and saddened to learn of the sickening and egregious words used by Miss America leadership in reference both to our group and to specific members of our sisterhood.

As dedicated members of communities, businesses and families, and ambassadors for the Miss America program across the country, we stand firmly against harassment, bullying and shaming – especially of women – through the use of derogatory terms mean to belittle and demean. As Miss Americas, we strongly reject the mischaracterization of us both collectively and individually. We also reject the ongoing efforts to divide our sisterhood and the attempts to pit us against one another. 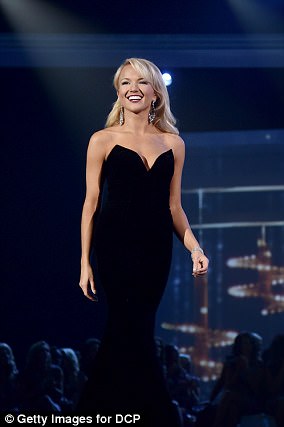 We believe in empowering and supporting young women as they work to achieve their professional and academic goals. Each of us participated in the Miss America program for these reasons, and we are proud that each woman in this program is well-educated, talented and strong. 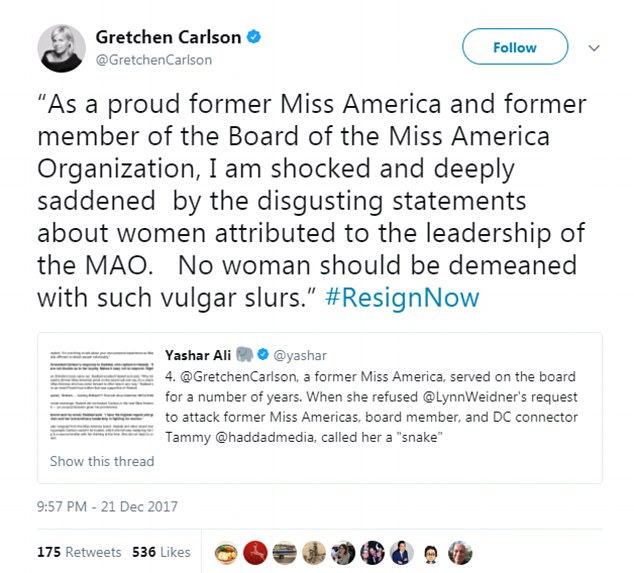 ‘Resign now’: Carlos tweeted that she was shocked by Haskell’s statements and called for his immediate ouster from the organization 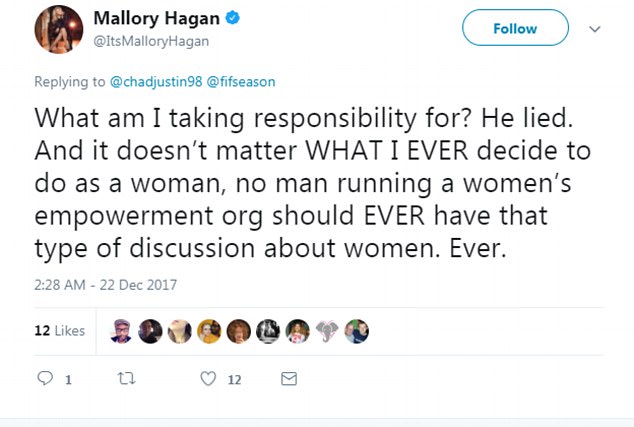 In response to a follower’s tweet suggesting that Hagan should take responsibility for her actions, the former pageant winner argued that Haskell had no right to discuss her sex life

In some exchanges, a former writer for the pageant notes the death of one former Miss America, and muses that he wished it had been 1998 Miss America Kate Shindle that had died instead. Shindle wrote a book critical of the Miss America Organization. Haskell responded to the email, indicating it made him laugh. 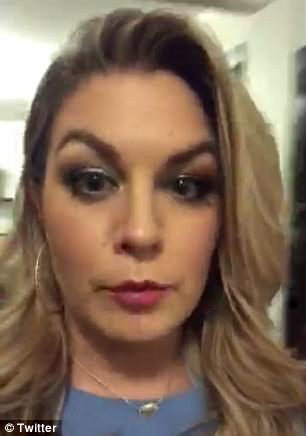 ‘The entire board of directors must immediately resign, including and especially Sam Haskell,’ Shindle wrote in a statement posted on Twitter, adding that ‘it [the content of the emails] makes me physically ill.’

And Haskell wrote of tactics that would drive 1989 Miss America Carlson ‘insane.’

The Huffington Post reported that the former Fox & Friends co-host had clashed with Haskell and pageant officials over her push to modernize the organization, and her refusal to attack other former Miss America winners.

Carlson wrote on Twitter that any board member or official who tolerated such conduct should resign immediately.

‘No woman should be demeaned with such vulgar slurs,’ she wrote.

Carlson, Hagan and Shindle have received the support of 46 fellow Miss America winners dating back to the 1940s, who on Friday signed an open letter demanding that Haskell and other pageant executives step down over their ‘despicable’.

Among the signatories were Miss America 1948 BeBe Shopp Waring and this year’s winner, Savvy Shields. Every woman who was crowned Miss America from 1988 until 2017 joined the call for the leadership’s ouster.

Miss America 2016 Betty Cantrell, who signed the petition, told The Associated Press she ‘lived under this misogynistic leadership for a year of my life, and I’m definitely glad to see all of this evidence come into the light.’

She also said pageant officials ‘told me which former Miss Americas I wasn’t allowed to associate with or pose for photos with.’ 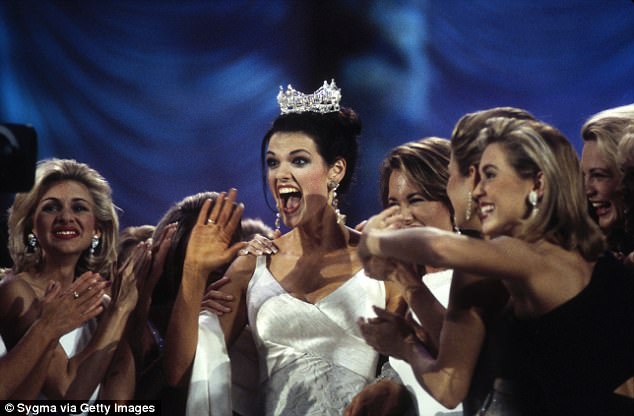 In 2014, the 1998 winner Kate Shindle (pictured) wrote a book in which she questioned the Miss America board’s decision to pay Haskell a $500,000 consulting fee. In an email to Haskell giving his condolences on a past winner’s death, telewriter Lewis Friedman wrote as the email subject: ‘It should have been Kate Shindle’ 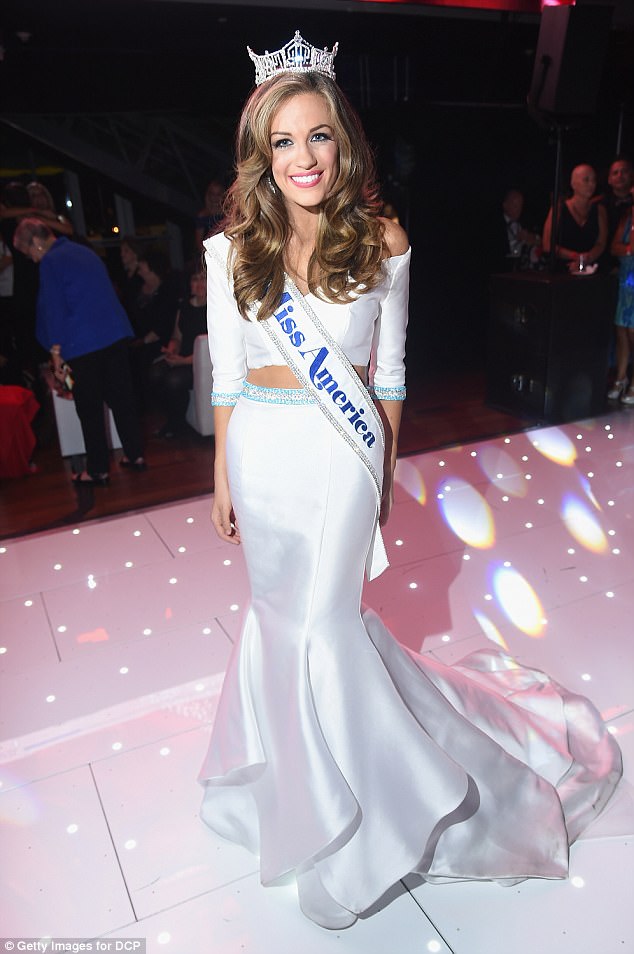 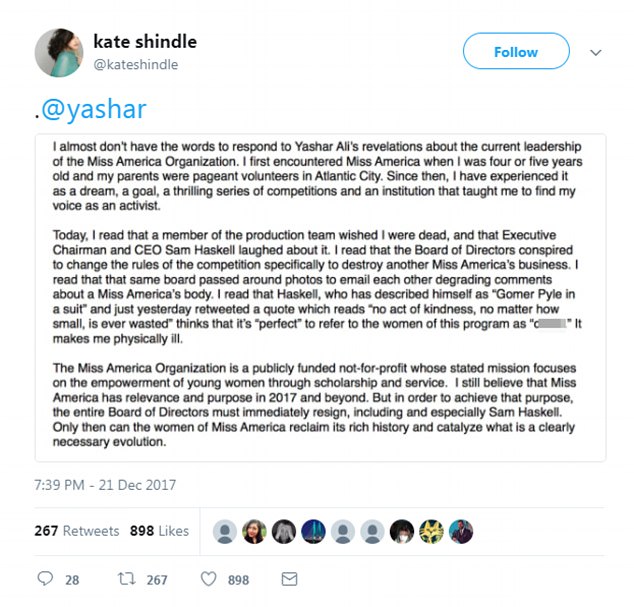 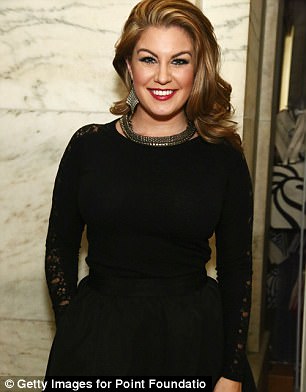 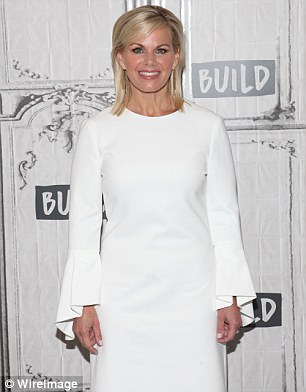 The Miss America Organization said Thursday night that Haskell apologized and the group is revising its policies regarding communications, adding it considers the matter closed.

On Friday, Atlantic City’s incoming Democratic mayor, Frank Gilliam Jr., and two state Assemblymen – Republican Chris Brown and Democrat Vince Mazzeo – called on the state Casino Reinvestment Development Authority to end its partial subsidy of the pageant, which has about $4million left on it.

The emails have cost the pageant its television production partner and raised questions about the future of the nationally televised broadcast from Atlantic City’s Boardwalk Hall the week after Labor Day each year.

Dick Clark Productions told The Associated Press Thursday night that it cut ties with the Miss America Organization over the emails, calling them ‘appalling.’

In an August 2014 email to a prominent Miss America telecast writer, Haskell said that he wanted to stop calling former contestants ‘Forever Miss Americas’ and instead refer to them as ‘Former Miss Americas.’

‘I’d already changed ‘Forevers!’ to ‘c***s’. Does that work for you?’ the writer, Lewis Friedman, responded.

The comments are in stark contrast to the glowing, supportive statements Haskell repeatedly made in public about past title winners.

In the summer of 2014, Haskell forwarded an email to other executives from someone he knew who had commented about Hagan’s sex life and recent weight gain.

‘Not a single day passes that I am not told some horrible story about Mallory,’ Haskell wrote.

Friedman replied: ‘As she continue to destroy her own credibility, her voice will attract less and less notice while she continues her descent to an unhappy pathetic footnote…Ps. Are we four the only ones not to have f****d Mallory?

‘It appears we are the only ones!’ Haskell wrote, adding that he told the mother of a man Hagan had supposedly slept with that ‘he needs to have a blood test because we lost count of the number of men she slept with at 25.’

Later, Hagan was publicly fat-shamed for a bikini photo that surfaced showing that she had gained some weight after the pageant. Haskell said nothing publicly about the images at the time but fat-shamed her internally. 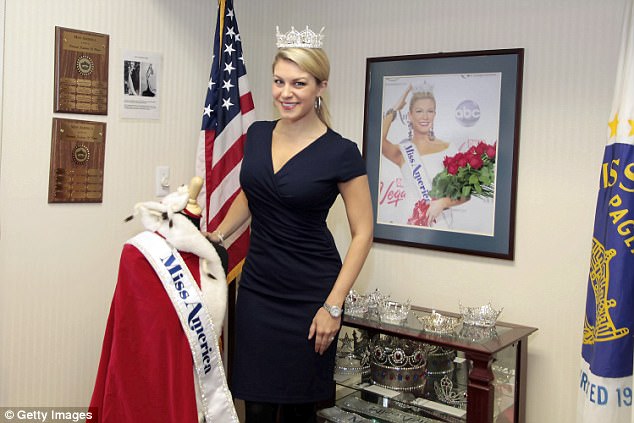 In the summer of 2014, Haskell wrote in an email that he and another executive were the only ones who hadn’t slept with Mallory Hagan (pictured, March 2013) 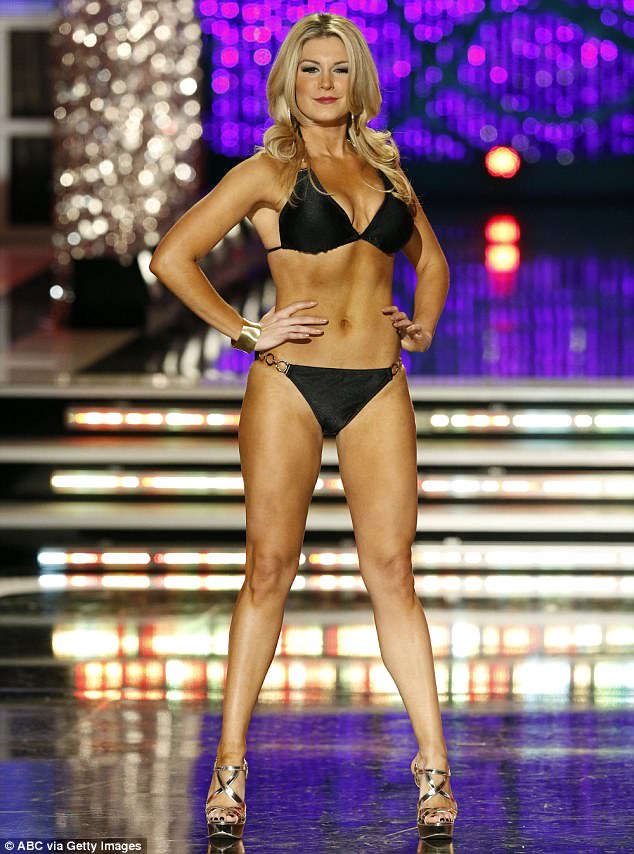 Later, Hagan was publicly fat-shamed for a bikini photo that surfaced (not pictured). Haskell said nothing publicly about the images at the time but fat-shamed her internally

Another incident involved the former Fox News host Carlson. In August 2014, Miss American board member Lynn Weidner sent an email to a group of former Miss Americas, including Carlson.

The email concerned a book 1998 Miss American winner Kate Shindle wrote in which she questioned the Miss America board’s decision to pay Haskell a $500,000 consulting fee.

Weidner asked: ‘Is it possible for each of you to speak out in defense of Sam and the organization?’

Carlson replied: ‘It’s one thing to talk about your own personal experience as Miss America… but totally different to attack people individually.’

Haskell forwarded Carlson’s response to board member Tammy Haddad, who replied to Haskell: ‘Snake but now u have not doubts as to her loyalty. Makes it easy not to respond. Right?’

Haddad suggested: ‘Why don’t u read [former Miss America] susan POWELL’s email on the board call and say it’s a shame that only one miss america who has come forward to offer help in any way.’ Haddad was referring to an email Powell had written that was supportive of Haskell.

In a further attack on Shinldle, Friedman emailed Haskell in December 2014 to offer his condolences on the death of former Miss America Mary Ann Mobley, writing: ‘So sorry to hear about Mary Ann Mobley.’

The subject line of Friedman’s email read: ‘It should have been Kate Shindle.’