Secret plan to blow up Sydney Harbour Bridge in 1942

Secret plans were made to destroy the Sydney Harbour Bridge if Japanese troops invaded the city in World War II.

Explosives placed at the northern approach and towards the southern end of the bridge’s deck would have brought the structure down.

The plans were drawn up at the direction of General Douglas MacArthur, Supreme Commander of Allied forces in the South-West Pacific, in 1942.

The bridge, opened in 1932 after nine years of construction, would have been sacrificed to thwart an easy harbour crossing for advancing Japanese forces. 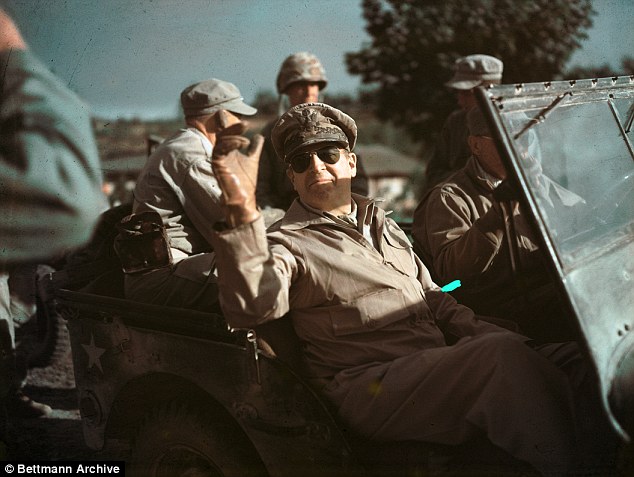 General Douglas MacArthur, Supreme Commander of Allied forces in the South-West Pacific in 1942, asked engineers to draw up plans to destroy the Sydney Harbour Bridge with explosives 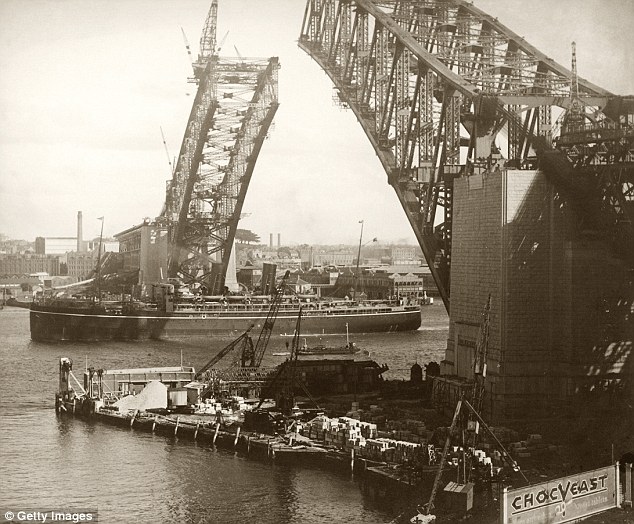 Secret plans were made to blow up the Sydney Harbour Bridge, pictured above during construction in 1926, if the Imperial Japanese Army invaded Australia in World War II

For almost 60 years the plans were largely forgotten until being unearthed in the wake of the terrorist attacks on New York’s World Trade Centre on September 11, 2001.

At that time, the New South Wales Government wanted to ensure the state’s landmarks, including the bridge, were as secure as possible, according to The Australian.

A document titled ‘Sydney Harbour Bridge Demolition Plan’ held securely in the state archives includes diagrams of the bridge and how it could be blown up.

Former army engineer Brian Nicholson told The Daily Mail in April 1957 he had been ordered to plan a way to destroy the bridge during World War II.

‘We were given the broad outlines for a master plan to destroy communications and supply lines throughout NSW if needed to stem Japanese drives on Sydney and Newcastle,’ Nicholson told the newspaper.

‘I was told under which circumstances the Harbour Bridge would be destroyed, I’m glad the decision was not mine to make. 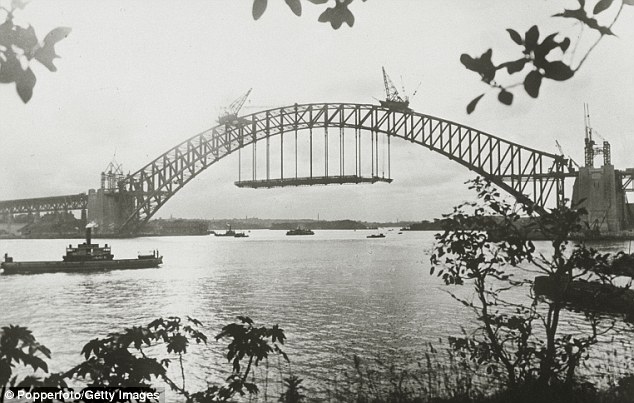 Construction of the Sydney Harbour Bridge began in 1923 and the structure was opened in 1932; just 10 years later plans were made to destroy it if the Japanese invaded Australia 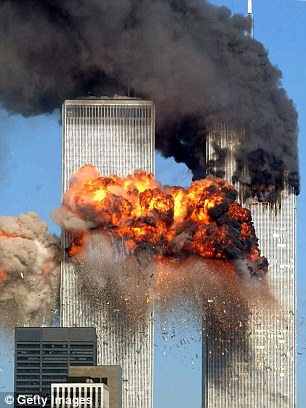 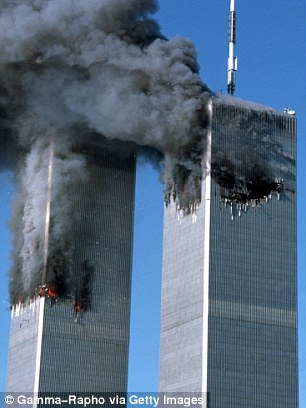 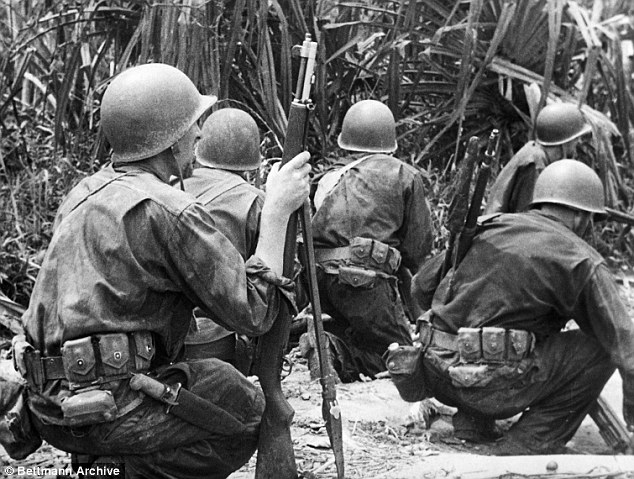 ‘I spent a day crawling around the bridge… over the arch picking the spots in which to place the cutting charges.

‘I estimated that six men could plant explosive charges at eight points on the great arch in less than a day.

‘The charge could be swiftly wired to an electric detonator near Millers Point.

‘Firing of the eight charges would have cut free a fairly large section of the arch in the southern half of the bridge.

‘With this section cut away from the rest, both remaining sections would have collapsed into the harbour.

‘Probably the pylons would have remained intact because the bridge is hinged at each end on massive bolts. The sections would have swung downwards into the water’ 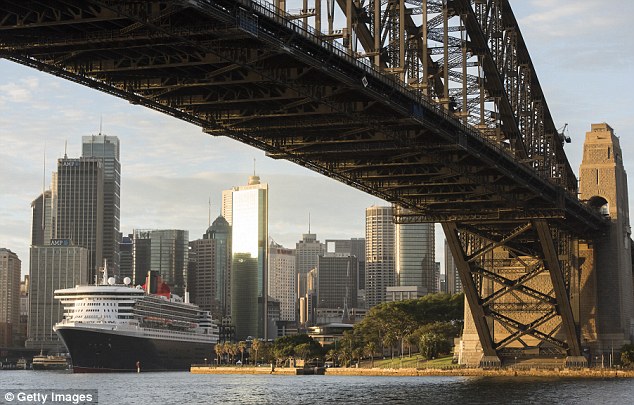 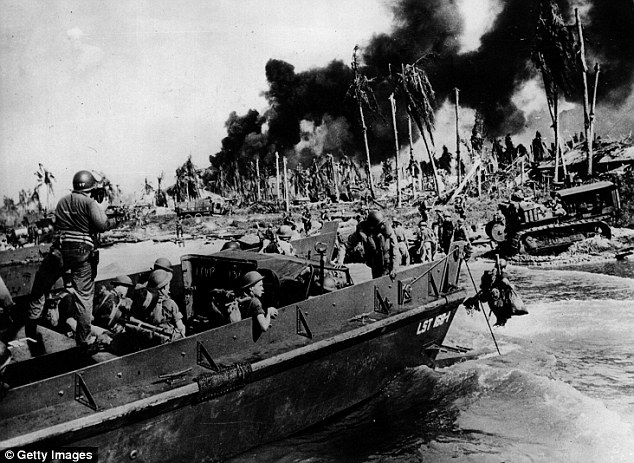 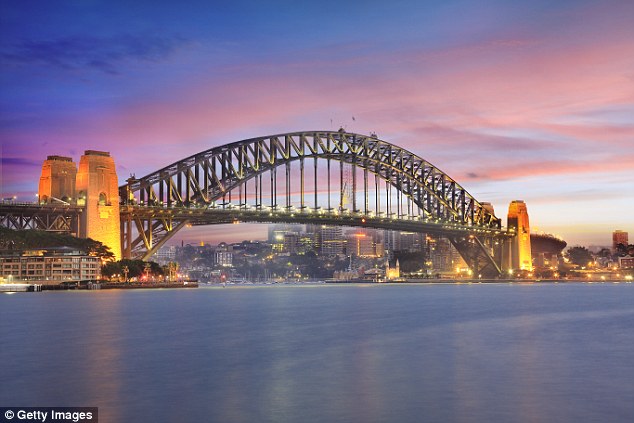 An early morning view of the Sydney Harbour Bridge which carries rail, car, bicycle and pedestrian traffic between the city’s central business district and the North Shore.

Former NSW Roads Minister Carl Scully became aware while writing his memoir Setting the Record Straight that one of his bureaucrats had seen the MacArthur plan after the September 11 attacks.

The bureaucrat told Mr Scully that one of the bridge design faults identified following September 11, 2001 had been spotted by engineers reporting to General MacArthur in 1942.

MacArthur had arrived in Australia in March that year after United States president Franklin D Roosevelt ordered him out of the The Philippines.

The American fleet in Pearl Harbour had been bombed on December 7 the previous year and 242 Japanese planes attacked Darwin on February 19, 1942.

Japanese submarines shelled Sydney and Newcastle in late May and early June 1942. One of their targets was the Harbour Bridge, which was not hit. 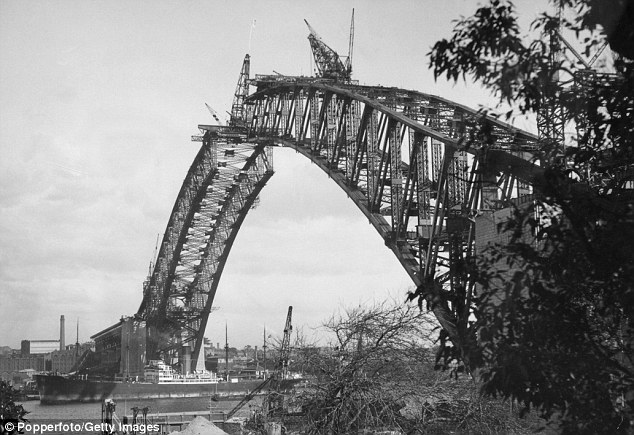 The Sydney Harbour Bridge, pictured under construction, is the sixth longest spanning-arch bridge in the world and the tallest steel arch bridge, measuring 134m from top to water level 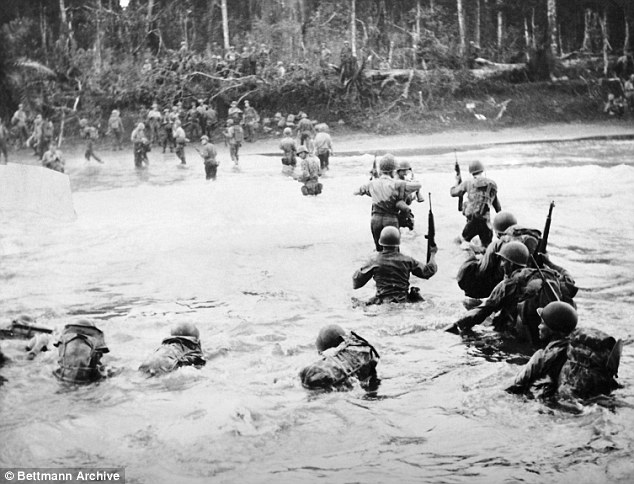 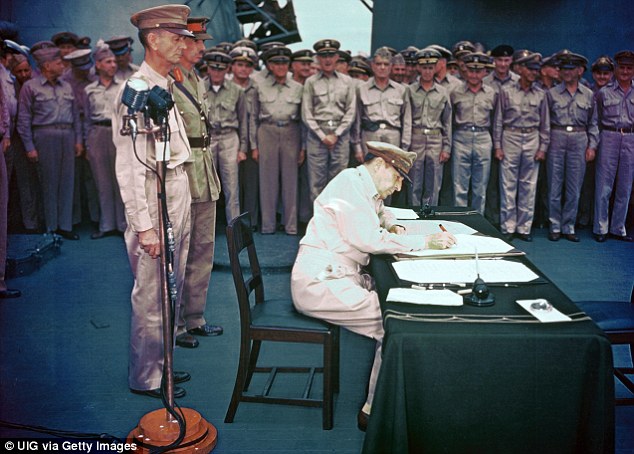 General Douglas MacArthur (seated) signs the Instrument of Surrender on behalf of the Allied Powers on board the USS Missouri at the conclusion of war with Japan on September 2, 1945

MacArthur, who ran the Allied war in the Pacific from Brisbane, had good reason to prepare for the Japanese heading south to Sydney.

‘We were basically doing what we needed to do to protect the bridge from being brought down and MacArthur had been doing the same thing in reverse.

‘There were two points on the bridge that needed to be dealt with to ensure that a truck bomb didn’t bring the bridge down.’

Mr Scully said Sydneysiders would not have noticed the reinforcement work done on the bridge, the exact location of which he would not reveal.

Likewise, the MacArthur plans were not available for public viewing.

‘The MacArthur drawings and all plans for the Harbour Bridge were put under lock and key,’ Mr Scully said.

‘You don’t want the wrong people coming into possession of them. They have been secure ever since.’ 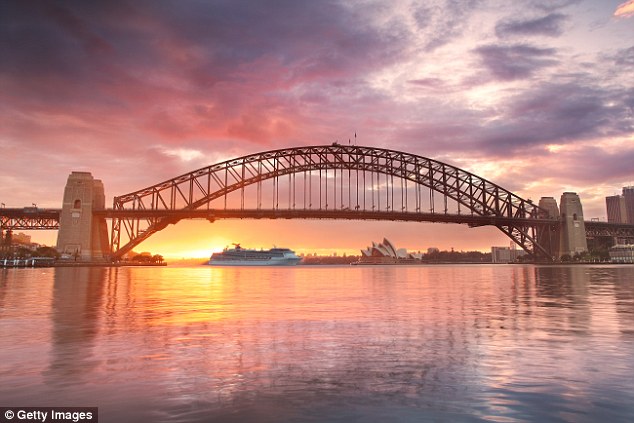