Secretaries and admin staff took on ward duties after a hospital was hit with a staffing crisis.

Managers at Diana, Princess of Wales Hospital in Grimsby, Linconshire, had to put out a desperate appeal for help after being hit by a combination of staff sickness and ward closures due to diarrhea and vomiting.

Clerical and admin staff volunteered to take on duties to allow remaining nurses to focus on patient care on Wednesday, February 14.

The hospital insisted those staff were not involved directly in patient care but were deployed to ‘help ease the pressure on our clinical staff’.

Secretaries and admin staff took on ward duties after a hospital was hit with a staffing crisis.

Northern Lincolnshire and Goole (NLAG) NHS Foundation Trust, which runs the hospital, praised the ‘brilliant response’ to their appeal for help.

Pictures taken by the Trust’s assistant director of nursing showed cheerful admin staff helping out on wards and managers.

HOW BAD IS THE NHS RECRUITMENT CRISIS?

The NHS recruitment crisis has become so bad that some parts of the country are only hiring one nurse for every 400 jobs advertised.

Official figures have laid bare the true extent of nursing shortages across the country with just one in seven advertised jobs getting filled.

There were 34,260 vacant nursing and midwifery roles advertised across England at the end of September – a record high.

Nursing leaders have claimed the Government ‘can no longer deny the staffing crisis’ on the back of the NHS Digital data.

It comes after a scathing analysis last week revealed a greater number of nurses and midwives are now leaving the health service than joining.

More than 33,000 walked away from nursing last year in England – about 10 per cent of the entire workforce. Around half were under the age of 40.

But the incident has raised concerns from some staff and Labour’s Great Grimsby MP Melanie Onn, who said it highlighted a critical shortage in clinical care as the NHS buckles under the strain of a surge in admissions and staffing shortages.

Miss Onn said: ‘There are acknowledged staffing difficulties at the NLAG Trust with a deficit of about 27% across the board.

‘The latest news, if accurate, demonstrates how stretched our local NHS is and I will raise this with the Health Minister at the earliest opportunity as it does not seem that the Government recognise the scale of the difficulties or putting in place solutions quickly enough.’

The Trust said staff has responded to an appeal for help as it faced ‘extreme pressure’ in recent days. Jayne Adamson, the Trust’s acting chief executive, said duties carried out by the non-clinical workers included answering phones, emptying bins and filling water jugs.

Ms Adamson said: ‘Like other hospitals this is an extremely busy time of the year but Grimsby hospital has been operating under extreme pressure for the past week due to a high level of staff sickness and a number of ward closures due to diarrhea and vomiting.

‘Our clinical staff are working incredibly hard under difficult circumstances to ensure our patients continue to receive the care and attention they need.

‘A number of administrative staff from our corporate services very kindly responded to a request for volunteers to help ease the pressure on our clinical staff by assisting the wards with non-clinical tasks like answering the phones, booking transport, filling water jugs, emptying bins and generally acting as a runner. 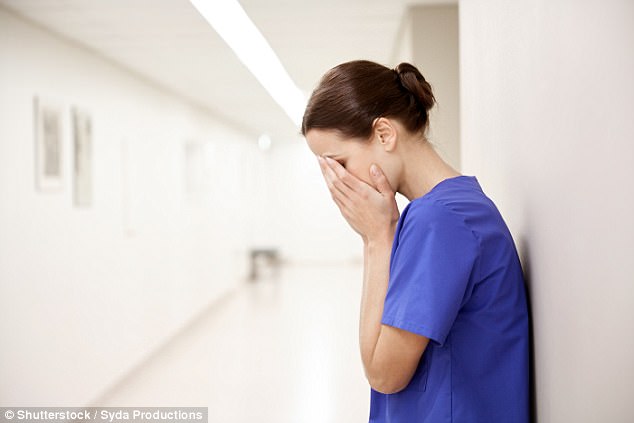 ‘There are acknowledged staffing difficulties at the NLAG Trust with a deficit of about 27% across the board,’ Labour’s Great Grimsby MP Melanie Onn said

‘They are performing non-clinical tasks only and have been briefed on infection control practices including the importance of handwashing and being bare below the elbow while on the wards.’

However, the Trust disputed claims that some who did volunteer had to undergo extra training or had not received adequate training.

DOES THE NHS RECEIVE ENOUGH FUNDING?

Campaigners have argued for years that the NHS is strapped of cash and desperately needs more funding to cope on a day-to-day basis.

it is now in the midst of its worst financial crisis in a generation, they warn, as the health service struggles to function on a tightly-constrained budget.

A&E waiting times have soared to record levels, tens of thousands of patients have had to wait outside casualty units for treatment and dozens of trusts have reported they have no free beds this winter.

NHS England has been allocated £123 billion this financial year from the Budget – but further cash injections have been asked for.

Last November, Chancellor Philip Hammond promised the health service a £2.8 billion cash injection over two years – but this was a third of what experts demanded.

Health trusts across the country have reported severe financial constraints in recent years as chiefs tightens their purse strings.

Miss Onn added: ‘All staff are working incredibly hard and stepping up to meet the challenges that come with being in special measures, from administrators to porters, healthcare assistants to consultants everyone has patients at their heart.

‘It is great if clerical staff want to help the hospital improve its patient care but it must not be the case that it is expected.

‘Any staff who do genuinely volunteer to help out temporarily must be provided with appropriate training, but the bigger picture is for the

Government to tackle the staffing crisis in the NHS, as it is not just Diana Princess of Wales that is affected by this problem.’

The latest insight into conditions at the hospital comes after a mother shared a letter highlighting how her daughter is ‘fading before her eyes’ working as a nurse at the Grimsby hospital.

It claimed the nurse cries because of the stress she is under and cannot sleep for worrying. But despite the personal toll, and pleas from her family, she refuses to leave her position at Diana, Princess of Wales Hospital.

The letter triggered an immediate response from Cleethorpes MP Martin Vickers who urged concerned staff to contact him in strict confidence so he can investigate.

On Tuesday (February 13) NLAG said some patients at Grimsby’s Diana, Princess of Wales Hospital will have appointments and surgery postponed again due to mounting winter pressures.

Around 600 people have already had their procedure postponed since the beginning of January.