Two Loomis security guards stole £7million in cash from a Credit Suisse in a Heathrow Airport heist described as one of the biggest in British criminal history, a court heard.

Twenty eight bags of cash were taken from a van at the airport and have never been recovered.

Jurors were told it was an ‘audacious’ theft worthy of a Hollywood script called ‘the Heathrow Heist’ and a classic ‘inside job’.

Van driver Mohammad Siddique, 31 and guard Ranjeev Singh, 40, are both charged with conspiracy to steal the cash belonging to the Swiss Bank, which was picked up by their Loomis intentional truck to deliver to the Bank of Ireland.

Loomis security van driver Mohammad Siddique, 31 and guard Ranjeev Singh, 40, are charged with conspiracy to steal £7million cash belonging to Credit Suisse that was collected at Heathrow Airport went missing after their vehicle (circled) was ‘stolen and abandoned’ nearby

Kingston Crown Court heard the pair collected the money from the British Airways cargo depot at around 8.30am on March 14.

Shortly after leaving the depot, Singh got out to go to the toilet, but when he came out Siddique had ‘driven off with the £7million in cash’.

Instead of raising the alarm Singh waited for 20 minutes, ‘nonchalantly smoked a cigarette’ and then reported what had happened to colleagues in another van.

In the meantime it is alleged the £7million was being transferred from the Loomis security van into a second vehicle, which had been parked in a secluded road in Feltham days before the heist.

The jury were told the pair, along with others, staged the heist on the van and Siddique was found a few hours later ‘tied up’ in a remote area near Gerrard’s Cross.

‘It was an audacious theft carefully planned and executed and you may think it would make a Hollywood movie script, they would call it the ‘Heathrow Heist’ if anyone wanted to write a script about it.

‘It is one of the biggest in British criminal history, there have been bigger, but £7million in a significant amount.

‘It was also an inside job, to use the colloquialism, and we say it had to be and inside job by these two defendants. They acted out their parts to the scripts they had already agreed.’

The prosecutor added: ‘Also they staged the robbery and the prosecution say made it look like a robbery.

‘And what happened to the money, the £7million? It vanished. Of course money doesn’t vanish somewhere, it was hidden away somewhere, only the conspirators know. Police so far have not been able to find it.’

The 28 bags of cash weighed almost half a tonne.

The defendants were described as ‘firm friends’ and had requested to be partnered for their rounds, which was not usual protocol, but was agreed by Loomis.

The court heard all vans are tracked by the firm, and employees are not allowed to be on their own in the vehicle. If they are the alarm should be raised by their colleague and the van can be immobilised remotely by the control room.

Singh claimed he did not have his phone on him having left it in the van, however a phone without a SIM card was found in his inside jacket pocket during a police search.

Referring to Singh’s delay in raising the alarm, the prosecutor said: ‘All this was part of the plan. He had to do that so Saddique had time to get there for the money to be transferred into the other van.’

The alarm was eventually raised and Loomis staff and police tracked down the van, which had been immobilised, and found the money was missing.

Just after 11.15am Siddique was found lying in a secluded rural side road by a husband and wife who had seen a man lying down as they were driving by. 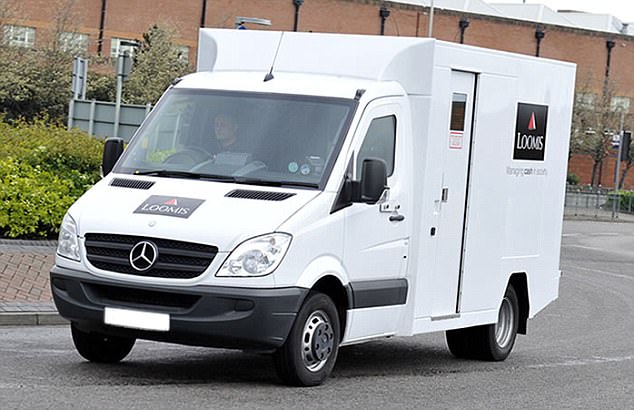 The prosecution allege both men took part in an ‘inside job’ and planned to make it look like their armoured van was hijacked. The money has never been recovered (file picture)

The husband got out and found Siddique saying, ‘help me, help me’.

The prosecutor said: ‘His hands were behind his back tied together with industrial black cable ties. His ankles were also secured with cable ties.’

The man was able to cut him free and Siddique was then questioned by detectives from the Met’s flying Squad who took an initial account from him.

Mr Patel QC said: ‘He admits his involvement. He say she was involved and took part in the offence, but this defendant says he was forced to do it, he had to go along because he had no choice as he had been threatened and his family had been threatened.’

The jury were told Rafaqat Hussain, 41, has already pleaded guilty to his part in the plot, and was described as one of the organisers, making arrangements with the two defendants and to make sure the ‘money was squirrelled away thereafter’.

Referring to the plot itself Mr Patel QC said: ‘It was planned, professionally over a number of weeks. It was not a spontaneous theft of the £7million.’

Siddique, of Slough, Berkshire, and Singh also of Slough, both deny one count of conspiracy to steal £7million from Credit Suisse.

The jury were told two others, Razvana Zeib, 34, and Garry Carrod, 34, were no longer part of the trial.