See you later! Ivanka’s informal goodbye to her father in Oval Officer after an official meeting

See you later! Ivanka’s VERY informal goodbye to her father in the Oval Office after an official meeting, where it is convention to refer to him as Mr. President

While aides and staff refer to Donald Trump as ‘Mr. President,’ Ivanka Trump keeps it casual and informal when speaking to her father in the Oval Office.

In the ABC News special which aired on Sunday, the first daughter is seen telling her dad, the president: ‘See you later.’

In the segment, President Trump was meeting with his daughter as well as his top economic advisor, Larry Kudlow.

‘We really believe that education has to be – especially for mid-to-late career workers – driven by the private sector,’ Ivanka Trump is seen telling her father. 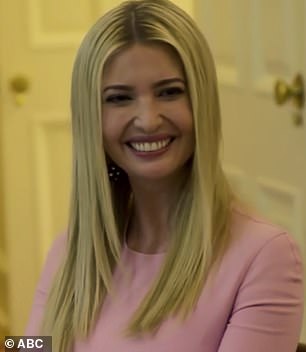 President Trump and his daughter, Ivanka (right), were filmed in the Oval Office this week as part of ABC News’ special behind-the-scenes feature 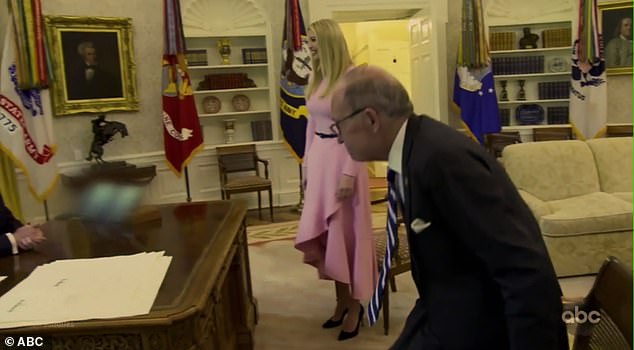 Ivanka Trump and the president’s top economic adviser, Larry Kudlow (right), were in talks with the president about an upcoming appearance at a jobs conference 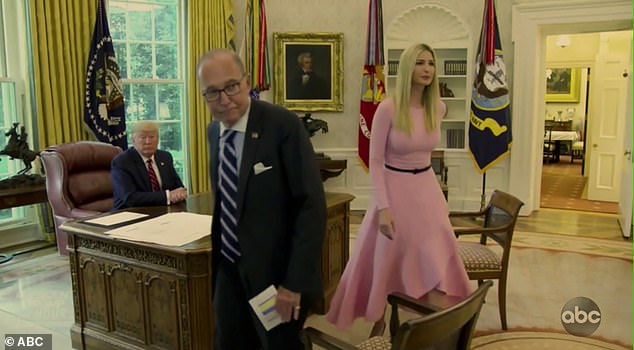 At the end of the meeting, Ivanka gets up and tells her father: ‘See you later’

Kudlow is then seen telling the president that he and Ivanka Trump are doing a ‘dog and pony show.’

‘I’m the dog, and she’s the pony,’ Kudlow says, pointing to the president’s daughter.

Ivanka Trump is a special advisor to the president. Her husband, Jared Kushner, has a wide-ranging portfolio that includes relations with Canada, Mexico, China, and forging Middle East peace.

Ivanka and Kudlow were keynote speakers at the SelectUSA Investment Summit, which was held earlier this week.

The event was dedicated to workforce development. 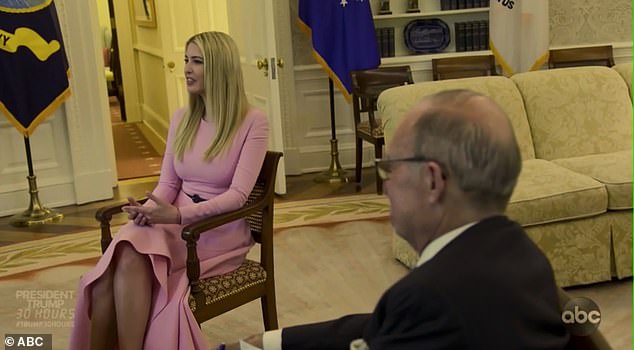 Ivanka and Kudlow were keynote speakers at the SelectUSA Investment Summit, which was held earlier this week. The event was dedicated to workforce development

‘It has been, first of all, a great honor to be included in what is a truly remarkable annual summit,’ she said at the beginning of the event.

‘I think this is the sixth year that this has been ongoing and the number of deals that have been generated through this dialogue is truly impressive.’

‘The reason this room is full is because the president has fulfilled his promise of ensuring that we adopt pro-growth policies and pique the interest of investors, not only locally but from around the world,’ she said.