Seinfeld stars Jason Alexander and Jerry Seinfeld have joined the outpouring of tributes for the late actor Jerry Stiller, who has died at the age of 92 from natural causes.

‘Yeah, I adored this man,’ Alexander tweeted on Monday alongside a picture of the pair together in 1999, where Stiller was taking part in his own comedy roast in Los Angeles.

Stiller played Frank Costanza, the father of Alexander’s character George Costanza, in 29 episodes of the groundbreaking sitcom, that ran from 1989 to 1998.

In an earlier tweet, Alexander wrote: ‘Such sad news that my beloved friend, Jerry Stiller, has passed. He was perhaps the kindest man I ever had the honor to work beside.’

Adding: ‘He made me laugh when I was a child and every day I was with him. A great actor, a great man, a lovely friend. #RIPJerryStiller I Love you.’

Meanwhile, Seinfeld’s main star Jerry Seinfeld tweeted a wordless tribute, a picture of himself holding up a vinyl copy of the 1967 comedy album by Stiller and his wife Anne Meara who died in 2015. 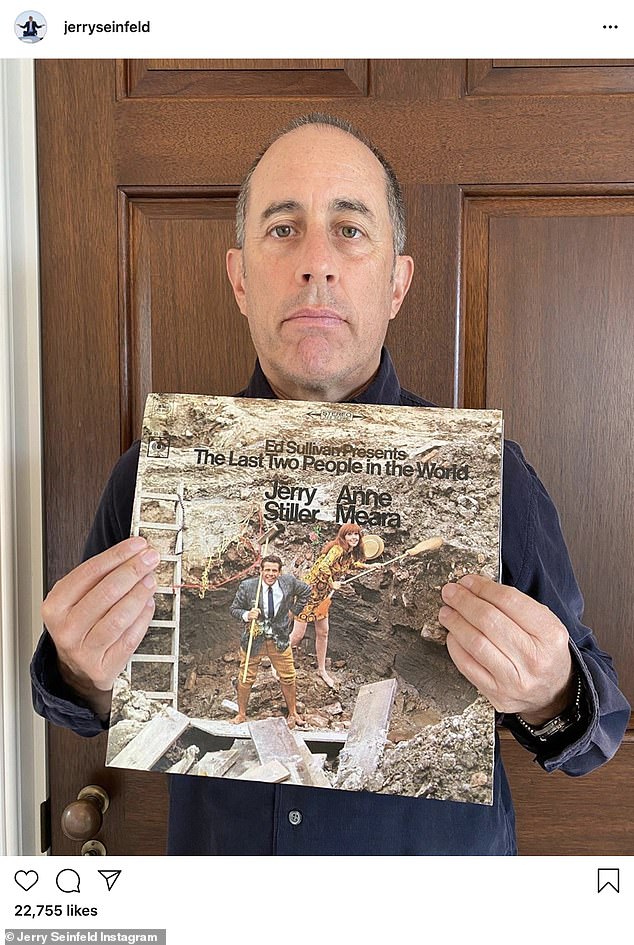 Respect: Seinfeld’s main star Jerry Seinfeld tweeted a wordless tribute, a picture of himself holding up a vinyl copy of the 1967 comedy album by Stiller and his wife Anne Meara

Heartfelt thanks: The actor’s son Ben Stiller shared this message with his followers on Monday afternoon 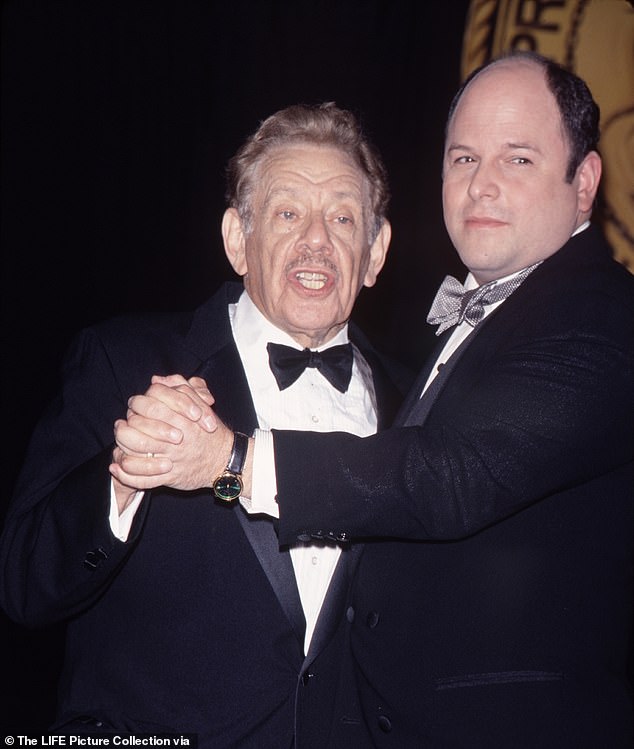 Happy memories: Alexander shared a photo from this event pictured above, with the pair larking about at the Friars Club Roast for Jerry at the Hilton Hotel in 1999 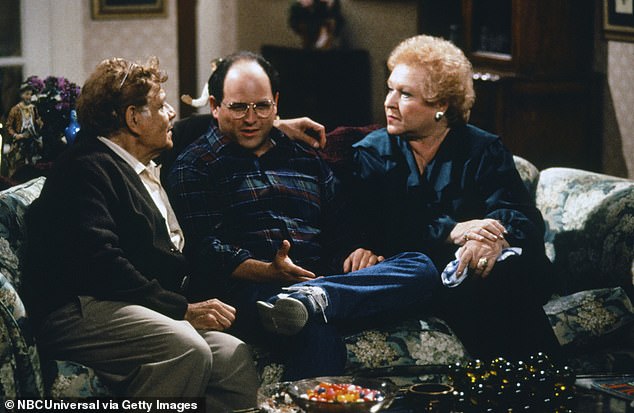 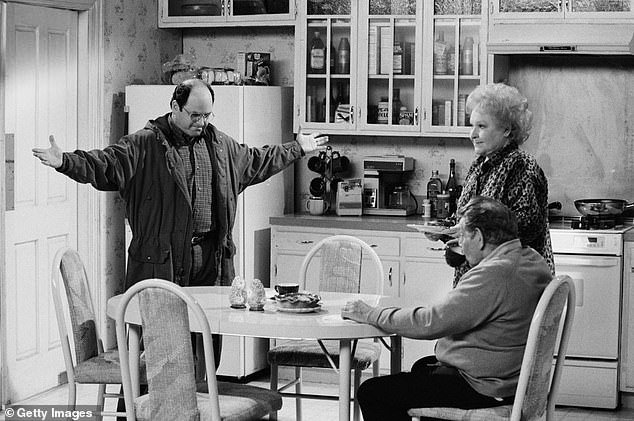 ‘I adored this man’: Jason clearly got close to the legendary comedian while filming Seinfeld 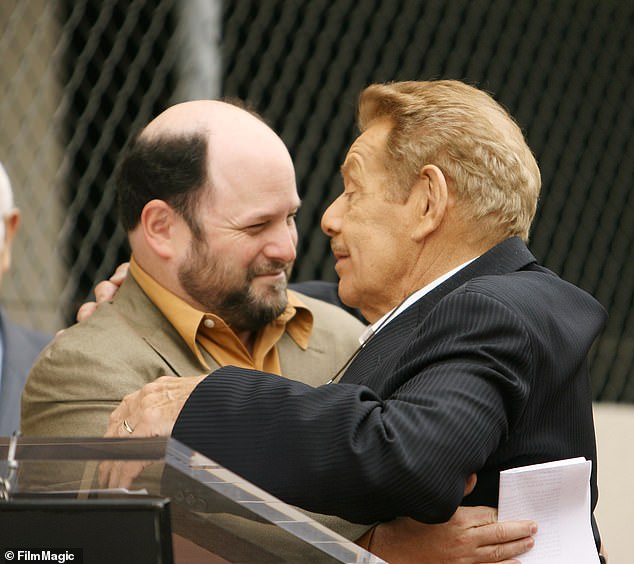 Support: Jason Alexander and Jerry Stiller together when he got his star on the Hollywood Walk of Fame in 2007

Following the many tributes, his son, actor Ben Stiller, tweeted: ‘Thanks so much for the incredible outpouring of love and appreciation for Jerry. I know how much it would mean to him.’

Earlier on Monday Ben had announced his father’s death, writing: ‘I’m sad to say that my father, Jerry Stiller, passed away from natural causes.

‘He was a great dad and grandfather, and the most dedicated husband to Anne for about 62 years. He will be greatly missed. Love you Dad.’

Stiller also starred in a number of films with Ben, including Zoolander, Heavyweights, Hot Pursuit, The Heartbreak Kid and Zoolander 2.

Earlier in his career, Stiller and his wife Anne Meara, who married in 1954, formed a hugely successful comedy duo, known as Siller and Meara, in the 1960s and 1970s.

Tweet: Alexander posted this tribute on Monday following the news 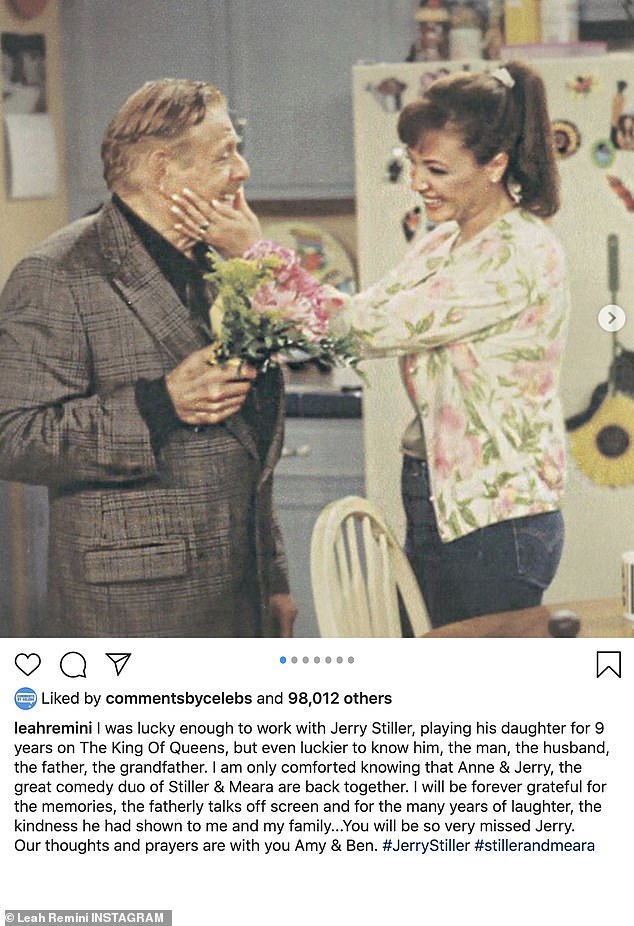 Cute: Leah Remini shared this photo of the pair, playing father and daughter on The King Of Queens 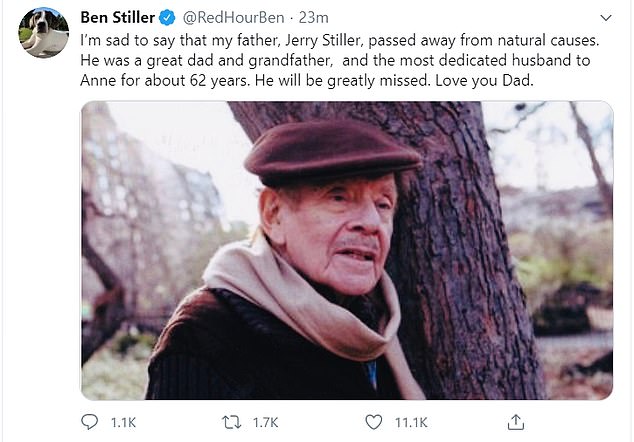 Dad: Actor and director Ben Stiller wrote on Twitter on Monday: ‘He was a great dad and grandfather, and the most dedicated husband to Anne for about 62 years’

Other stars flooded social media with condolences and tributes on Twitter.

Seth Rogen wrote: ‘So sorry. He made me laugh till I cried on many many occasions.

TV host Tom Bergeron shared Still caught him watching him on Kings of Queens during a flight once saying: ‘As I’m laughing I realize I’m being watched. I turn and Jerry Stiller is staring at me. “I love watching people enjoy my work.” #RIPJerryStiller’

Showing support: Many celebrities – including Ricky Gervais – replied to Ben Stiller’s tweet with message of condolences

Emotional: Comedian Christoper Titus shared that he was in tears over the news

Actress Leah Remini tweeted: ‘I was lucky enough to work with Jerry Stiller, playing his daughter for 9 years on The King Of Queens, but even luckier to know him, the man, the husband, the father, the grandfather.’

Clue actor Michael McKean wrote: ‘RIP Jerry Stiller, a great comic actor and a splendid man. He and his wife Anne were royalty but they would’ve laughed in your face if you said so. And then hugged the hell out of you.’

Billionaire Michael Bloomberg tweeted a picture of the pair, saying: ‘The late Jerry Stiller was – and always will be – a NYC icon.’

‘He & Anne Meara were legendary entertainers, and I had the good luck to present them with a “Made in New York” Mayor’s Award for Lifetime Achievement in 2012. Now they’re back together, & Heaven just got a lot funnier.’ 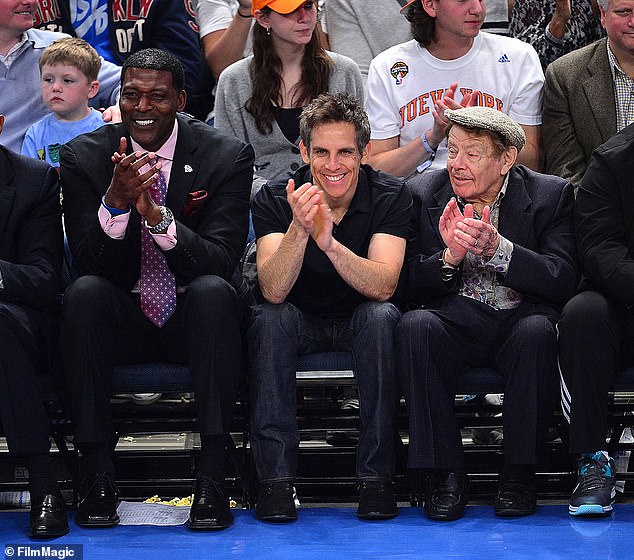 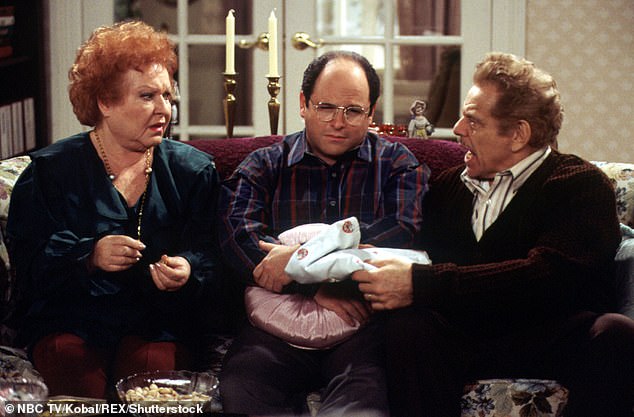 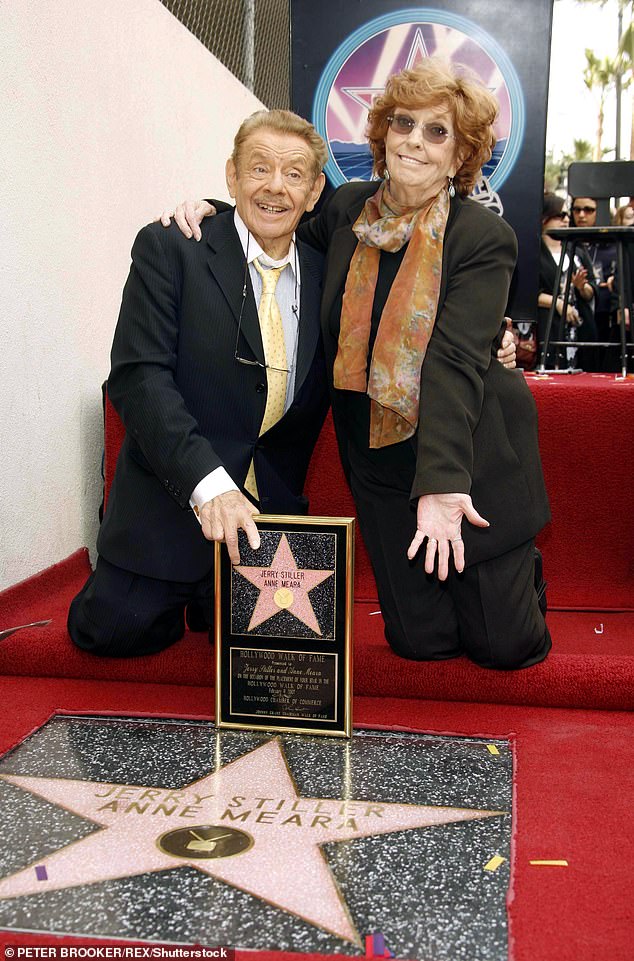 Fame: Stiller and Meara shared a star on the Hollywood Walk of Fame, awarded in 2007