Ministers are today urged to end the devastating pursuit of self-employed workers who legally cut their tax bills up to 20 years ago.

More than 50,000 contract workers — including nurses, teachers, and small business owners — have been hit with backdated tax demands for as much as hundreds of thousands of pounds.

The controversial Loan Charge — which aims to claw back unpaid taxes from as far back as 1999 — has been linked to suicides and bankruptcy.

Campaigners protest outside the House of Commons after more than 50,000 contract workers — including nurses and small business owners were hit with backdated tax demands

The former Tory Party leader last week said he was ‘ashamed’ of his government for allowing it to go ahead. HMRC is using the Loan Charge to demand tax they say was avoided using ‘disguised remuneration’ schemes.

These involved paying workers using tax-free loans from offshore trusts that did not need to be paid back. By paying the workers a loan, it meant employers did not need to pay income tax and National Insurance contributions.

The Loan Charge, announced in the 2016 Budget, made any outstanding loans on April 5 this year taxable income. This means freelancers who used the legal loophole face a retrospective tax bill on all their income since 1999 that was paid using the loans.

HMRC expects to claw back £3.2 billion before the repayment deadline of January 31.

But a Treasury sub-committee report last month warned the charge was causing ‘widespread anxiety and distrust’. Campaigners have linked it to five suicides, and more than 150 MPs have joined an All-Party Parliamentary Group to highlight concerns that many will be made bankrupt or have to sell their homes.

Boris Johnson promised to order an independent review at leadership hustings earlier this summer, but months on, HMRC is still demanding the huge sums be repaid.

Terry Brooker, 58, was told to pay £240,000 back tax from his work as an IT contractor for Her Majesty’s Customs and Excise (HMCE) and the Metropolitan Police in the early 2000s.

A freelancing friend had recommended the scheme. Terry says if the taxman had told him not to use the scheme, he would never have agreed to it. He says the umbrella firm — based on the Isle of Man — took around 15 pc of his income in fees. He missed out on pension contributions, holiday and sick pay that employees normally get.

The father-of-two, from Colchester, says: ‘It is absolutely horrendous, it is just so unfair.

‘You cannot expect me to now pay six years’ worth of tax given I believed there was nothing wrong with what I was doing.’ 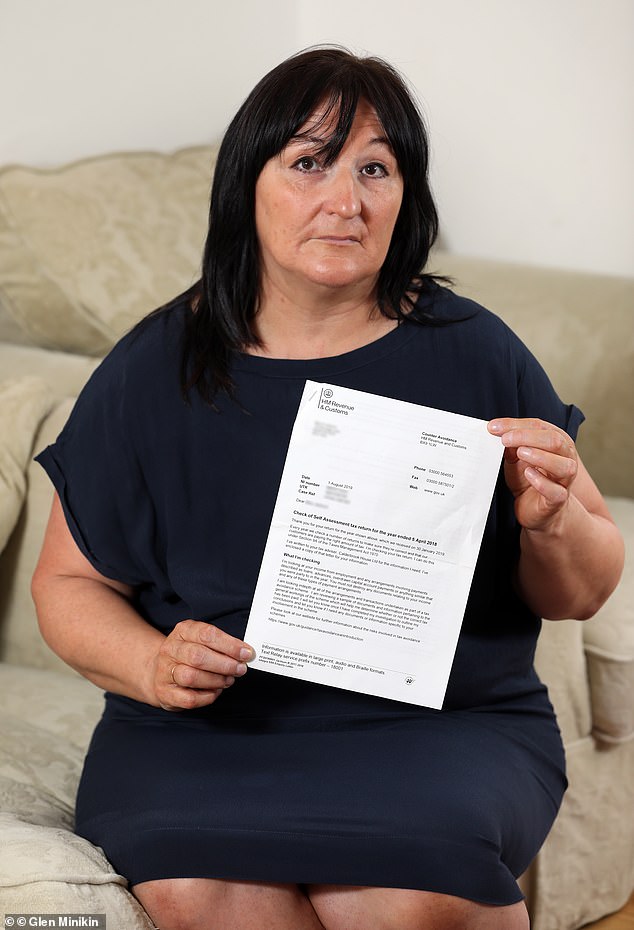 After recovering from breast cancer, a social worker we’ll just call Beverley, decided not to go back full-time and registered as self-employed instead.

She set up a limited company to work as a locum and receive payments from her agency.

But in 2016, she was told by her agency she could no longer use a limited company because of a new law called IR35. She has to use an umbrella company instead.

Weeks later, the mother-of-three says she was contacted by Smart Pay which said it would manage her earnings and she would get to keep at least 90 per cent of her income.

Beverley, 50, from Manchester, says: ‘[The caller] had a very shiny sales pitch. I questioned how it worked but he said there was nothing to worry about; they had been operating the loan payment scheme for years.

‘He said it was perfectly legal and if HMRC queried anything with us, I should tell them to contact Smart Pay.’

Two years later, she received a letter from HMRC telling her she would be investigated.

Beverley, who quit the scheme immediately, says: ‘It came like a bolt out of the blue. I am not a tax expert and I feel naive for following their advice.’

She says: ‘We are an everyday working-class family, we don’t have that type of money. I am filled with horror every time a letter arrives.’

Smart Pay did not respond to a request for comment.

Loan Charge Action Group (LCAG) has launched a campaign for a judicial review into the charge.

Tax barrister Keith Gordon, of Temple Tax Chambers in London, says the law could be a breach of human rights. He says many workers had to sign up to the scheme in order to get paid, and were given no indication they were doing anything wrong.

‘A lot of the contractors were not doing it to avoid paying tax, but to do their job,’ he says. ‘And HMRC, by failing to make enough noise, gave the impression it was acceptable.’ Mike Cherry, the Federation of Small Businesses national chairman, has called on the Government to review the charge. He says: ‘Retrospective tax grabs make it impossible to plan for the future. Many who are playing fair with their tax affairs today will be wondering where else the Government might suddenly change the rules.’

An HMRC spokesman says: ‘The Loan Charge is designed to tackle tax avoidance and ensure everyone pays their fair share. It builds on more than two decades of HMRC action to challenge these schemes. The Prime Minister will be setting out more details on the Government’s policy agendas over the next few months.’

The Loan Charge was announced in the 2016 Budget to make sure users of tax avoidance loan schemes pay their share of tax.

Tens of thousands of self-employed workers received their earnings as a loan, instead of income. It meant they avoided paying income tax and national insurance. HMRC says the loans were never intended to be repaid; therefore they count as income and should be taxed.

The Loan Charge applies to all loans, taken out by those such as social worker Beverley, made since April 6, 1999, if they were still outstanding on April 5, 2019, and the tax due had not been settled.

If users gave HMRC all the required information about their loan by April 5, 2019, or had already settled their tax affairs, they would not be subject to the Loan Charge.

Those who settled would be charged income tax on all loans paid to them, less the scheme’s expenses. Tax would be calculated at rates and bands applicable in the year the loan was made.

Users who did not meet the April 5, 2019, deadline have to pay the Loan Charge. It takes the total of all outstanding loans on April 5, 2019, and treats them as income received on that date, or profits arising in the tax year 2018/2019. This means they’re likely to be charged tax at a much higher rate.

Those who have not settled must give details of outstanding loans to HMRC before the January 31, 2020, self-assessment deadline.