Selling Sunset: How much money do the real estate agents make?

Selling Sunset season five arrived on Netflix on Friday, bringing Chrishell Stause, Christine Quinn and the other Oppenheim Group agents back to our screens.

While the latest series of the smash hit reality series has focused on Chrishell’s relationship with boss Jason Oppenheim and Christine’s ongoing office feuds, the million-dollar listings continue to flood into the brokerage.

And with their designer wardrobes, soaring fame and their own million dollar homes, it’s clear to see the glam agents are making mega bucks, but just how much money do the Selling Sunset cast take home from each sale?

Earning power: The Selling Sunset cast continue to bring in the million-dollar listings during season five of the Netflix show but how much do they earn?

Mary Fitzgerald, who was promoted to Vice President during series five, has previously opened up about how the agents make their money.

‘I think the hardest thing in real estate is working for commission only. Spending months sometimes with a client and then they change their minds,’ she explained to The Express.

The percentage of commission the Selling Sunset agents receive varies depending on the property, with Mary explaining: ‘The best part can also be when a client finds something they love immediately and I make a huge commission with very little effort.’ 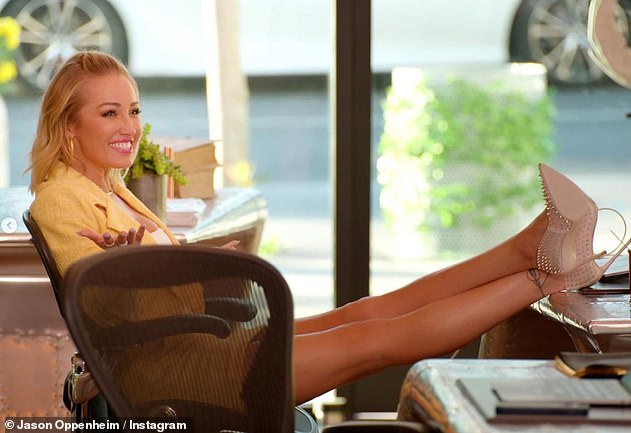 All commission: Mary Fitzgerald, who was promoted to Vice President during series five, has previously opened up about how the agents make their money

‘This unfortunately is not normally the case, but I have double-ended deals represented the buyer as well on my own listing, so this is the best scenario for an agent.’

The relators typically make a 3-5% commission on the sale price of each listing. And the agents aren’t working on a typical $300,000 home, with the houses featured on the show generally selling in the high millions, therefore that 3% means a commission in the thousands.

But as Maya Vander, The Oppenheim Group’s first ever agent, has explained the agent doesn’t actually bank that full commission after bagging a sale. 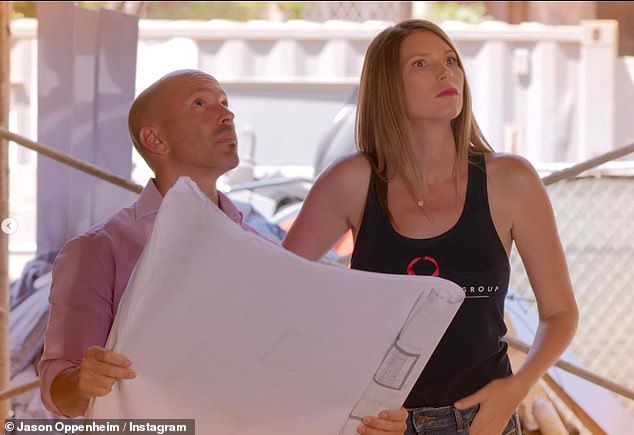 ‘Typically the commission on a purchase is 5%,’ Maya told Metro in a 2020 interview.

‘If I bring the buyer, I get 2.5% of the purchase price, but then Jason will take his cut because he’s the broker and he has the liability.’ 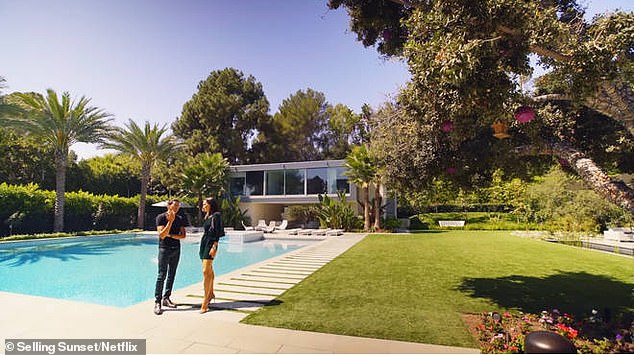 Big money: If Davina Potratz had managed to sell the infamous $75 million (£60million) home featured on season three, she would have made $1.3million (£1million) in commission

Working with those figures, if Davina Potratz had managed to sell the infamous $75 million (£60million) home featured on season three of the hit show, she would have made $1.3million (£1million) in commission and Jason would have banked $562,000 (£452,000) with his broker’s fee, before taxes.

Mary was said to have been the highest earning agent in seasons one to four of the Netflix show, earning an estimated $1.8million in commission from her listings in that time.

But twin brothers Jason and Brett are the real high rollers, with the individual net fortunes of the attorneys turned brokers said to be $50million. 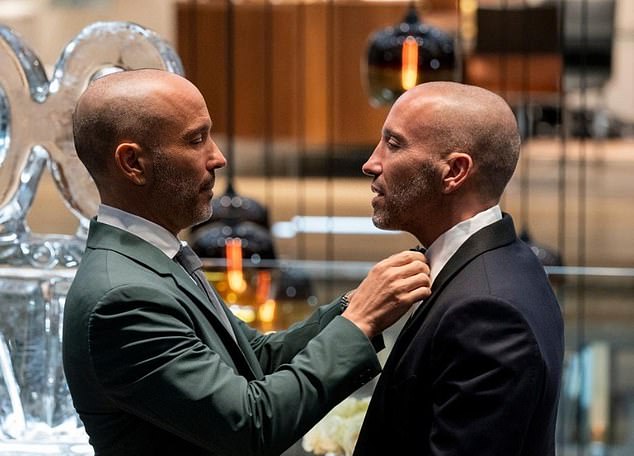 Taking their cut: The agent doesn’t actually bank the full commission after bagging a sale, with Brett and Jason, who are worth $50million each, taking 30% for their broker’s fee

With the soaring success of Selling Sunset the agents have also branched out from their Sunset Strip office, cashing in on their fame with lucrative sponsorship and Instagram deals.

Chrishell found fame before Selling Sunset thanks to her acting roles on major US soaps Days Of Our Lives and The Young And The Restless, and her marriage to This Is Us star Justin Hartley.

Her success on Selling Sunset led to a Dancing With The Stars appearance and a book deal, meaning the 40-year-old is now said to be worth upwards of $5million.

Chrishell proved her bank balance is in the millions when she purchased a stunning $3.3million home in the Hollywood Hills last year. 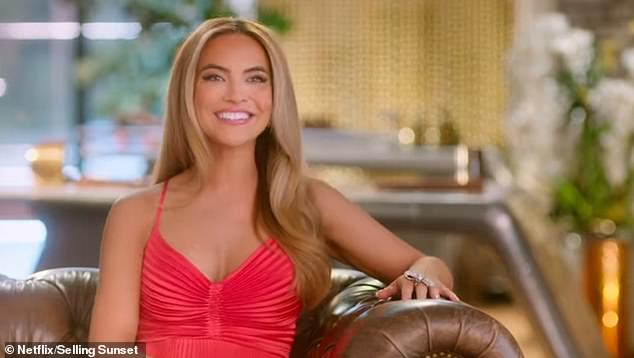 High roller: With the soaring success of Selling Sunset the agents have branched out from their Sunset Strip office, cashing in on their fame. Chrishell Stause is reportedly worth $5million

Which Selling Sunset star is worth the most?

Jason and Brett Oppenheim – $50million each

Christine doesn’t quite have a net worth to match her rival, with the breakout star of the show said to be worth $1.5 million, up from $500,000 in 2020, according to Celebrity Net Worth

But as she has pointed out multiple times on the show Christine married for money when she tied the knot with tech entrepreneur Christian Dumontet – who is worth an estimated $20million – in 2019.

Like Chrishell, Vanessa Villela earned a fortune in the millions thanks to her previous acting career, having starred in soap operas back home in Mexico. According to Bustle, Vanessa is worth about $5 million.

Heather Rae El Moussa’s estimated $3million fortune comes in part from her acting and modelling work alongside seven years of real estate deals (she was the second agent to join Oppenheim after Maya) and her sponsored Instagram posts.

Davina’s lengthy career in real estate (she got her licence in 2006) has banked her $2million, while Mary, who joined best friends Brett and Jason at Oppenheim in 2015 is worth $1million.

Amanza Smith and Maya are also worth $1 million. Maya’s fortune is thanks to her work with the Oppenheim brothers as well as her job with another real estate firm in Miami, where her family live. 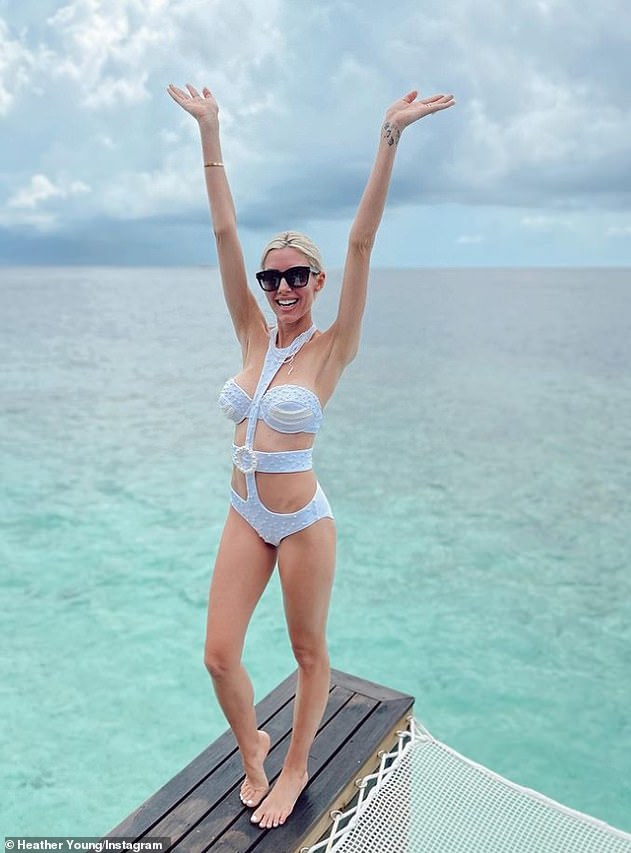 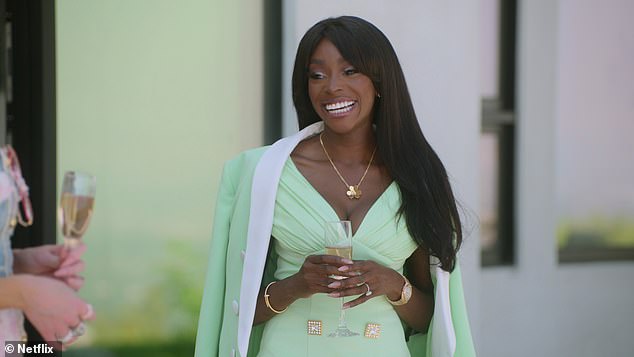 New recruit: Chelsea Lazkani only earned her desk at The Oppenheim Group in the current series, but thanks to her past real estate success she’s already worth about $500,000

Emma Hernan joined the show in series four. Thanks to both her real estate deals and her famous empanadas, the leggy blonde is said to have a net worth of $3million.

The savvy businesswoman also admitted on the show that she started making money young by investing in stock when she was a teenager – a move which has now allowed her a lavish lifestyle which includes exclusively flying private with her beloved pet dog.

Selling Sunset newbie Chelsea Lazkani only earned her desk at The Oppenheim Group in the current series, but thanks to her past real estate success she’s already reported to be worth about $500,000, according to ontrend.news.

While the agents have bank balances to be envied, they do have to spend money to make money, with Christine pointing out that ‘Netflix doesn’t pay for anything.’

Speaking to Refinery29, the blonde revealed that she pays for her own hair, makeup and wardrobe during filming, adding up to a reported $1,000 spend a day on her image. 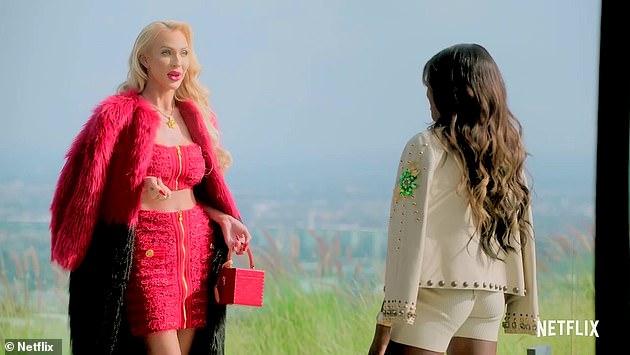 All her:  While the agents have bank balances to be envied, they do have to spend money to make money, with Christine pointing out that ‘Netflix doesn’t pay for anything’