Senate Judiciary Democrats have called on President Trump to withdraw Brett Kavanaugh’s nomination or order an FBI investigation into the sex assault allegations.

‘We are writing to request that you immediately withdraw the nomination of Brett Kavanaugh to be an Associate Justice on the Supreme Court or direct the FBI to re-open its background investigation and thoroughly examine the multiple allegations of sexual assault,’ the statement read.

The Judicary Dems noted that allegations made by Kavanaugh’s chief accuser Christine Blasey Ford were referred to the FBI for investigation.

They said that since then, two additional women have come forward, including Deborah Ramirez and Julie Swetnick.

Ramirez allegesl Kavanaugh exposed himself to her while they were both students at Yale, while Swetnick said she witnessed Kavanaugh ‘consistently engage in excessive drinking and inappropriate contact of a sexual nature with women in the early 1980s’.

‘It is clear from reporting that there were others present or with knowledge of these shocking allegations who also should be interviewed,’ the Judicary Dems said in their statement.

‘The serious and credible allegations of one woman should have been enough to require a complete investigation by the FBI. It should not have required multiple women with consistent accounts of serious sexual misconduct by Judge Kavanaugh to trigger a meaningful nonpartisan investigation.

‘Judge Kavanaugh is being considered for a promotion. He is asking for a lifetime appointment to the nation’s highest court where he will have the opportunity to rule on matters that will impact Americans for decades. 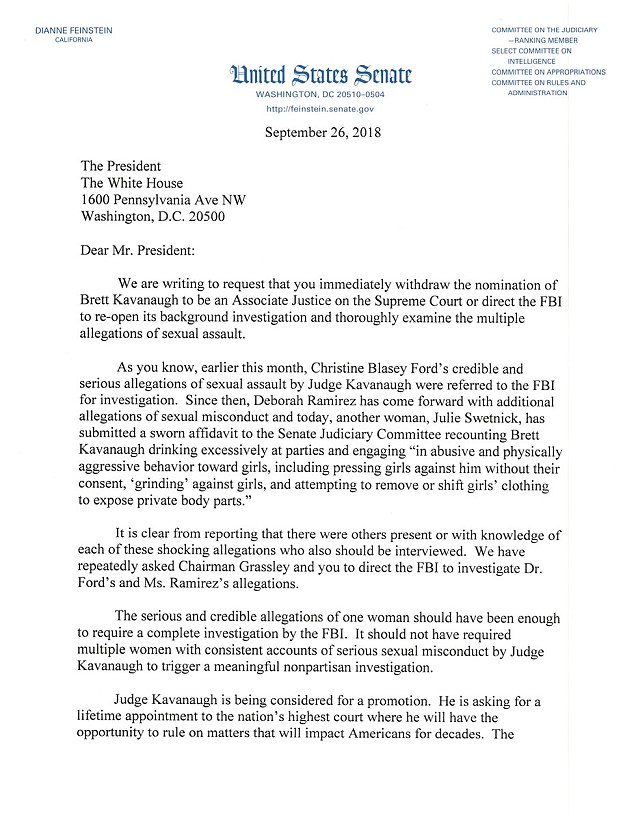 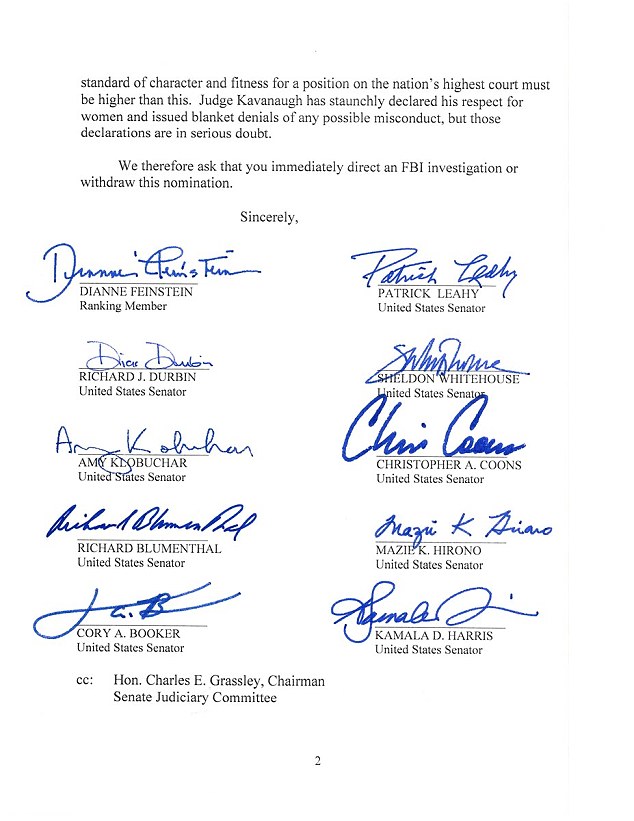 ‘The standard of character and fitness for a position on the nation’s highest court must be higher than this. Judge Kavanaugh has staunchly declared his respect for women and issued blanket denials of any possible misconduct, but those declarations are in serious doubt.’

President Trump weighed in on Wednesday, describing what is happening to Kavanaugh as a ‘disgrace’.

Trump blamed the Senate Democrats and suggested that how they handled sexual misconduct allegations against Kavanaugh would help Republicans at the polls.

Republicans are fighting to maintain their grip on both houses of Congress in the face of strong enthusiasm by Democratic voters who oppose Trump and his policies.

‘It’s disgraceful. It’s a disgrace to the country. And I think you’re going to see it in the midterms,’ Trump said.

Trump also said ‘these Democratic senators’ are a ‘disgrace.’