The Senate will vote Wednesday morning on whether it will move forward with negotiating the Republicans’ police reform bill, but Democrats have already denounced the legislation as ‘threadbare’ and are prepared to block it.

House Speaker Nancy Pelosi claimed Tuesday that if Democrats allowed the current version of the bill to pass in the Senate, it would be like allowing Republicans to ‘get away with murder.’

‘For something to happen, they’re going to have to face the realities of police brutalities, the realities of the need for justice in policing, and the recognition that there’s many good people in law enforcement, but not all. And that we have to address those concerns,’ Pelosi told CBS News Radio correspondent Steve Futterman.

‘So, when they admit that, and have some suggestions that are worthy of consideration – but so far they were trying to get away with murder, actually – the murder of George Floyd,’ the California Democrat asserted.

In a Tuesday letter to Senate Majority Leader Mitch McConnell, Minority Leader Chuck Schumer and fellow Democratic Senators Kamala Harris and Cory Booker claimed the current state of the bill is ‘threadbare and lacking in substance.’

Republicans need seven Democrats to cross party lines for the Senate to even begin debating the legislation, which was authored by the sole black Senate Republican Tim Scott.

However, Schumer along with Harris and Booker, who co-authored the Democratic version of the policing bill unveiled earlier this month, said in the letter that the GOP legislation has passed the point of being fixed, as they claim it doesn’t go far enough.

‘This bill is not salvageable and we need bipartisan talks to get to a constructive starting point,’ they wrote.

Democrats claim they did not have any input in the bill and are demanding a full ban on police officers’ use of chokeholds. 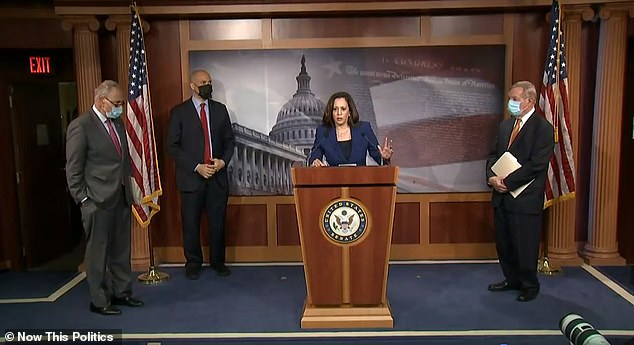 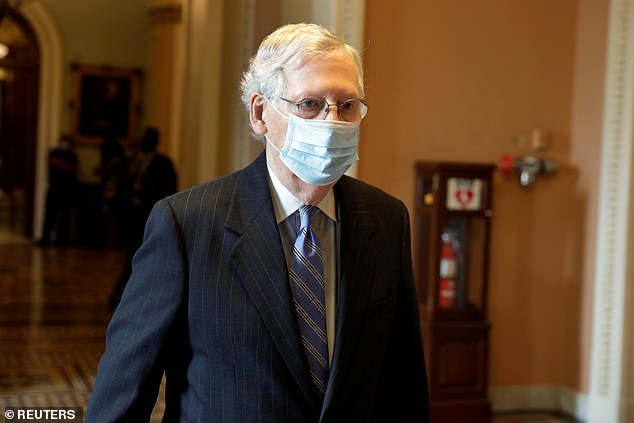 Senate Majority Leader Mitch McConnell will bring the bill to the floor for a vote on debating the legislation, but Democrats insists the bill does not go far enough and claim McConnell is not giving a big enough commitment that Republicans will budge on the bill 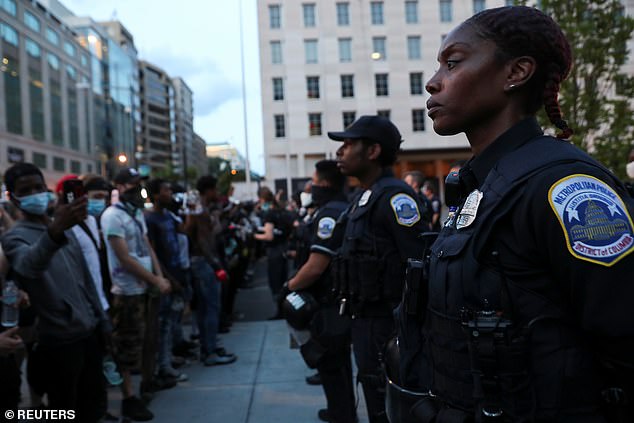 –  $100 million for more forces to use body cameras. Police departments where officers don’t turn on body cameras during arrests or stops will lose federal cash

– Cash for de-escalation training, and national standards on it

– Set up 9/11-style National Criminal Justice Commission with 18 months to produce report on how to make justice system equal at federal, state and local levels. Among areas it will study: police recruitment, discipline and firing; setting up use of force review boards in every state; and dealing with mental health problems

– National Museum of African American History will produce education program on history of racism in the U.S. for law enforcement bodies

The Democratic version of the bill, proposed in the Democrat-controlled House, would do a sweeping ban on chokeholds, prohibit no-knock warrants and make it easier to sue law enforcement for using excessive force.

The letter from Democrats to McConnell comes after the lawyer for George Floyd’s family, Benjamin Crump, spoke out against the Republican bill.

‘The Black community is tired of the lip service,’ Crump said in a statement.

He continued of the Republican package that it is ‘in direct contrast to the demands of the people, who have taken to the streets, to call for the reallocation of resources in order to improve social safety nets and public mental health programs.’

Democrats are positioning themselves to block the Republicans’ bill before it even hits the floor for debate as they claim the legislation does not go far enough, especially in banning cops’ use of chokeholds.

McConnell needs 60 votes for the Senate to begin negotiations on the bill, which was authored by the sole black GOP Senator Tim Scott – but Democrats are signaling they will not let the debate commence.

There was no Democratic input in the bill, and many claim that McConnell is not prepared to negotiate on additional measures or those already included.

Democrats claim they want more assurances from McConnell that there will be concessions made on the side of Republicans before they vote to bring the bill up for debate.

The Kentucky Republican set the Senate on a path to consider the legislation on Wednesday and must lure at least seven Democrats to support even opening debate on a GOP bill written without any Democratic input. So far, few Democrats have expressed any interest.

‘If nothing changes, I’m voting,’ Senator Jon Tester said, according Politico. ‘I need some assurances that we’re going to vote on amendments that will fix this bill. And it needs a lot of fixing.’

Republicans would need Tester, the centrist Democratic senator from Montana, and six other aisle crossers to assemble the 60 votes needed to move forward.

McConnell is preparing to bring the bill to the Senate floor on Wednesday as Senate Minority Leader Chuck Schumer previously claimed he would allow for the debate. It now appears, however, that Republicans will not be able to get the seven Democrats votes they need. 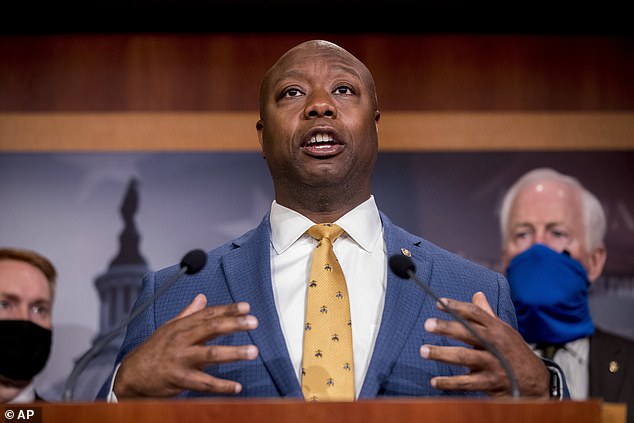 House Speaker Nancy Pelosi unveiled the Democrats’ version of a police reform bill earlier this month and riots and protests following the death of George Floyd continued to sweep the nation.

The California Democrat has indicated that she wants the Senate to take up the bill so both chambers can begin formal negotiations.

Many Senate Democrats also said Monday night that they are being urged by several progressive organizations, including the NAACP Legal Defense Fund, to oppose the bill.