A senior BBC reporter was hauled off air yesterday for an offensive comment about the Leicester City chairman’s private life.

The pair died alongside Kaveporn Punpare and co-pilots Eric Swaffer, 53, and Izabela Lechowicz, 46, on Saturday night after their helicopter crashed in a ball of fire next to Leicester’s King Power Stadium.

Roan, pictured, was picked up on a microphone saying: ‘As opposed to the mistress who died in the crash, otherwise known as member of staff, i.e. mistress… family man…’

As he stood at a vigil to the dead at the stadium, he added: ‘But that’s what you do if you are a billionaire or royalty, it’s relatively expected so we shouldn’t judge.’ Roan was picked up on a Sky News live feed broadcasting on YouTube.

He apologised for his comments, saying they were made in an off-air conversation with a colleague and ‘no offence was intended’. 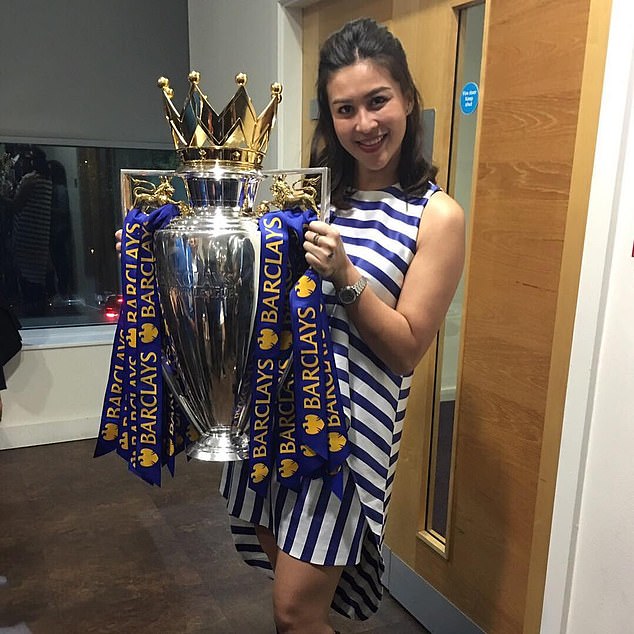 Nusara died alongside Vichai Srivaddhanaprabha in the helicopter crash

But there was an outcry among supporters and formal complaints to the BBC. One fan said the comments were ‘thoughtless and hurtful’, while another said: ‘If you had an iota of contrition, you would tender your resignation.’

The corporation replaced Roan for its reporting from Leicester yesterday but refused to comment on the row, saying only that the comments were ‘ill-judged’ and that Roan had apologised.

It came as thousands streamed to Leicester’s ground to sign books of condolence yesterday, which will be handed to Srivaddhanaprabha’s widow and children.

Police confirmed that all five bodies had been recovered.