Serena Williams hails Kate Middleton as ‘one heck of a woman’

Serena Williams has hailed the Duchess of Cambridge ‘one heck of a woman’ following her appearance outside the Lindo Wing just hours after giving birth.

The tennis star, 36, said she thought the royal had given birth ‘maybe two days before’ after seeing the photographs of Kate looking immaculate with her new baby.

Serena said she was definitely ‘not in heels’ following the birth of her own baby daughter, Alexis Olympia, in September.

The mother-of-one has previously shared details about her own traumatic birth, revealing how she ‘almost died’ due to complications.

Speaking to Popsugar about the Duchess of Cambridge’s recent arrival, Serena said: ‘I was really busy, but I saw the baby, and Kate was dressed, and I was like, “Oh, maybe she had him a couple days ago.”

‘That’s one heck of a woman! Let me tell you: I was not in heels [after I gave birth]. I thought she gave birth maybe two days before! Wow.’

Kate, 36, gave birth to her third child, whose name has not been revealed yet, on Monday morning. 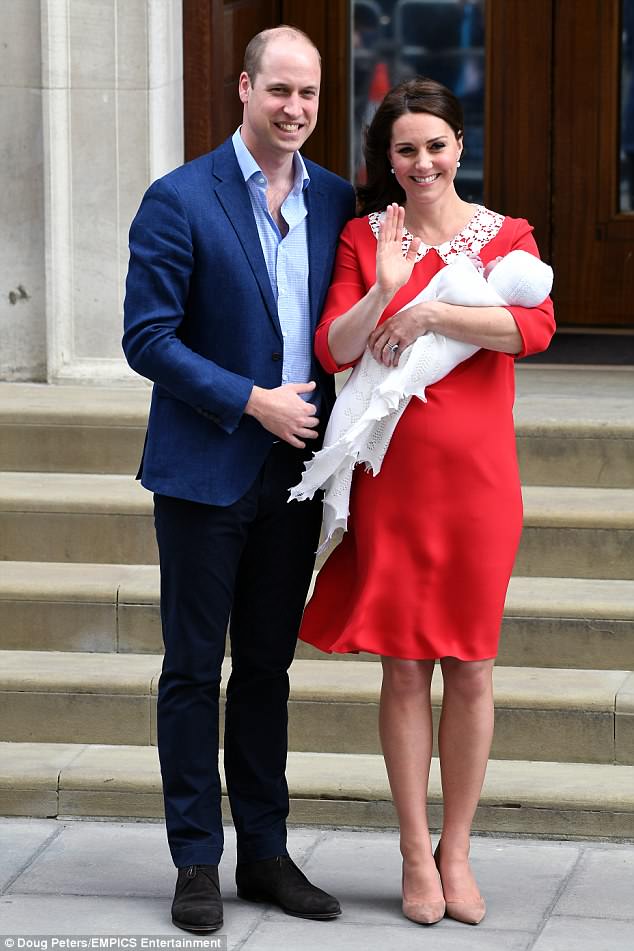 The Duchess of Cambridge posed for photographs outside the Lindo Wing at St Mary’s Hospital, Paddington, with her newborn son on Monday

Just hours later, she posed for photographs outside the Lindo Wing at St Mary’s Hospital, Paddington, with her newborn son.

Serena’s comments comes after the Duchess has received criticism from other women for putting ‘ridiculous pressure’ on new mothers to look perfect.

In fact, dozens of mothers have flooded social media with their own post-partum snaps, in contrast to Kate’s pristine image.

British presenter Katy Hill also commented on the expectations put on mothers after birth, in light of the arrival of Kate’s third child. 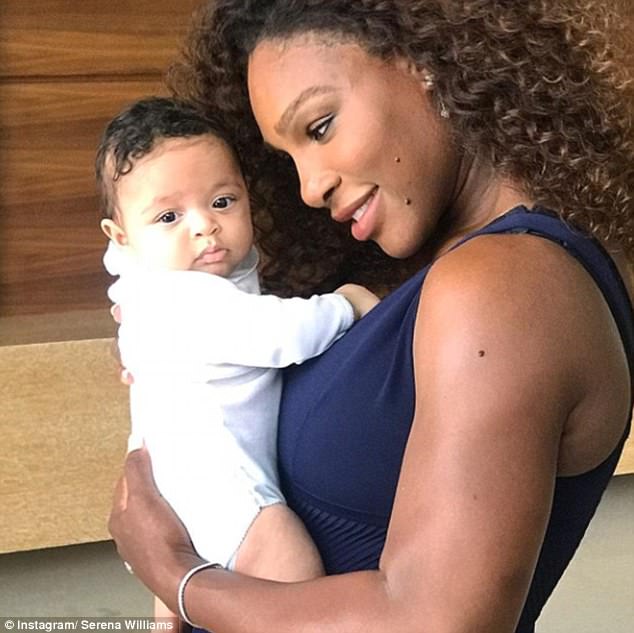 Serena has previously shared details about her own traumatic birth, after welcoming baby daughter Alexis Olympia Jr. (pictured) into the world 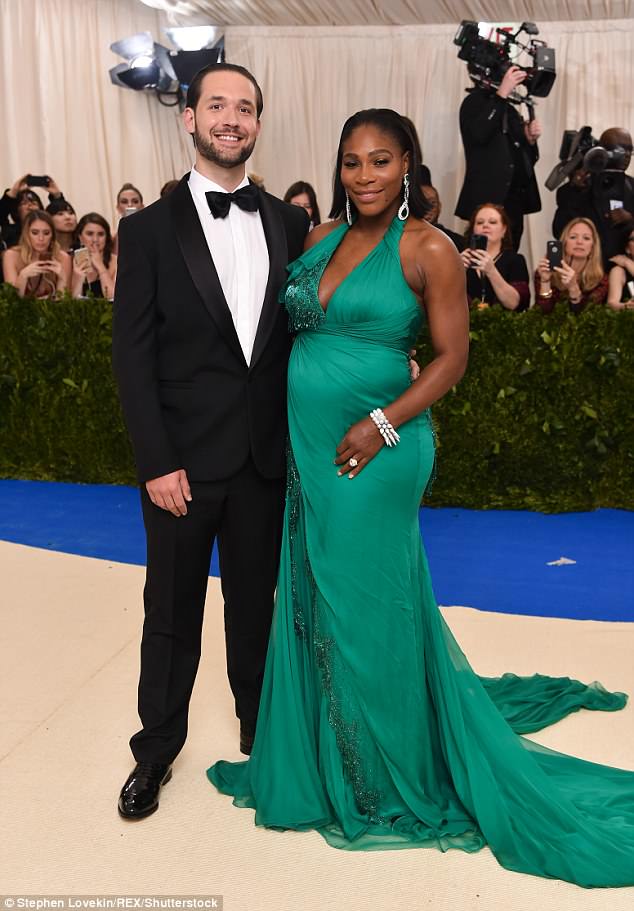 She said that Kate, by summoning her hairdresser and stylist to the Lindo Wing, had missed out on precious time alone with her new son.

Writing on her blog, the former Blue Peter presenter said after giving birth to her two children she entered a euphoric haze the Duchess would not have allowed herself to enjoy.

‘Kate was basically robbed of the intimate magic of those first few precious hours,’ she said. 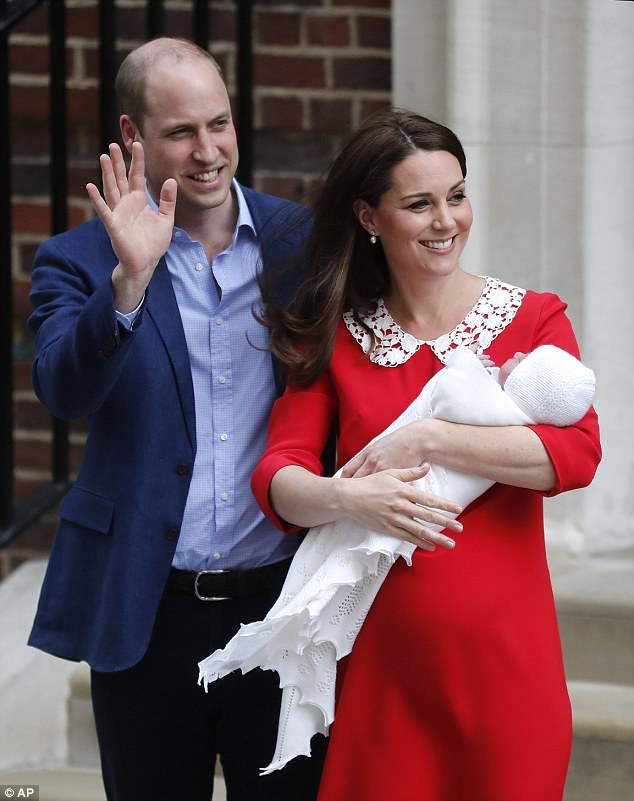 Kate, 36, has received some criticism for putting other mothers under ‘ridiculous pressure’ with her immaculate appearance after giving birth

‘Her haze would have been filled with blow-dries and make-up and tights and heels and a flurry of business to get her camera ready, to live up to protocol, tradition and expectation as the world’s press awaited’.

Miss Hill, who has daughters Kaya Sky, 12, and Akira, ten, added: ‘I wanted to shout, “Nooooo Kate”. I don’t expect to see a woman hours after giving birth wearing tights and heels and earrings.

‘I realise, as a duchess, she can’t do what I did and shuffle out in a baggy cotton sundress and flip flops. But neither do we expect a new mum to be that put together. Had she worn something more casual, you’d have heard a cacophony of collective cheers from women around the globe.’

Serena Williams was forced to have an emergency C-section to deliver her daughter Alexis Olympia after her heart rate started to plummet.

The day after the birth, Williams was experiencing a shortness of breath and scans revealed she had several blood clots in her lungs.

She was given a drip with anti-coagulant drugs, but constant coughing from her pulmonary embolism opened up the scar from the c-section and her abdomen filled with her now-thinned blood.

Doctors saved her life by inserting a filter into a major vein to prevent any more clots from entering her lungs, and she was put on bed rest for the next six weeks.

Writing for CNN about her experience, she said: ‘I almost died after giving birth to my daughter, Olympia. Yet I consider myself fortunate,’ Williams writes.

‘I am so grateful I had access to such an incredible medical team of doctors and nurses at a hospital with state-of-the-art equipment. They knew exactly how to handle this complicated turn of events.’