‘I will never spit on animals, let alone humans, let alone fans of this club’: Serge Aurier denies claims he spat at Tottenham supporters while celebrating goal against Olympiacos

Serge Aurier has emphatically denied claims he spat at Tottenham fans after scoring against Olympiacos in the Champions League on Tuesday night.

The Ivorian right-back scored Tottenham’s third of the night with an emphatic half-volley as the hosts came from two goals behind to beat Olympiacos 4-2 in north London.

But during the celebrations following his goal, controversy occurred as video footage appeared to show Aurier spitting towards the direction of fans.

The 26-year-old also appeared to cup his ears while facing the supporters as he celebrated his fine strike at the Tottenham Hotspur Stadium.

But Aurier has denied suggestions that he spat at fans, writing on Instagram: ‘Little personal message to correct a controversy!

‘I will never spit on animals, let alone humans, let alone fans of this club that gives me the opportunity to express myself and do my job.

‘Let’s focus on the most important goals that are coming soon.’ 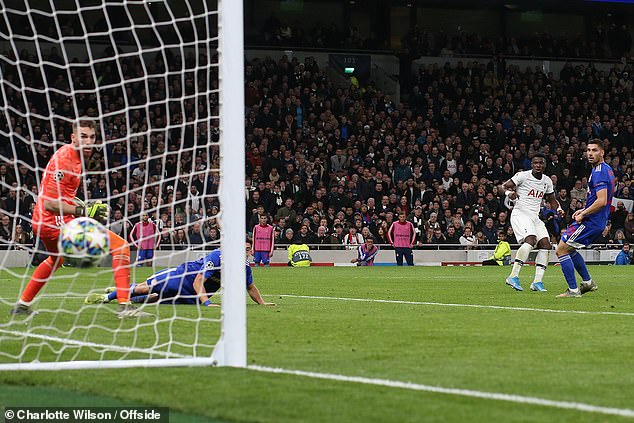