A castle built on the site of one of Mary, Queen of Scots favourite retreats is on the market for £8 million.

Seton Castle, near Longniddy, Scotland, is set in the East Lothian countryside and built on the site of the once Seton Palace.

The castle was designed by the pioneering Scottish architect Robert Adam using sandstone from Seton Palace and completed in 1791.

Seton Castle, near Longniddy, Scotland, is set in the East Lothian countryside and built on the site of the once Seton Palace which was demolished in 1789 following years of neglect 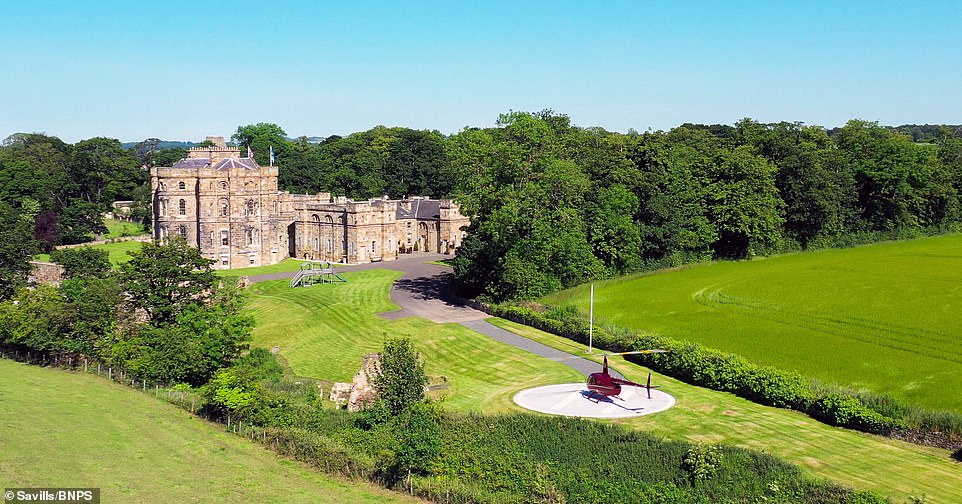 A helipad in the grounds of the castle built by pioneering Scottish architect Robert Adams. He designed the castle using the sandstone from the Palace and kept the palace’s garden walls and towers

In 2007 the castle made headlines after it sold for £5 million, which was the highest price paid for a private Scottish residence.

The spectacular property is now set to sell with estate agents Savills who describe it as ‘one of Scotland’s most ravishing buildings’.

It is situated just ten miles from Edinburgh and enjoys breathtaking views over the sea. 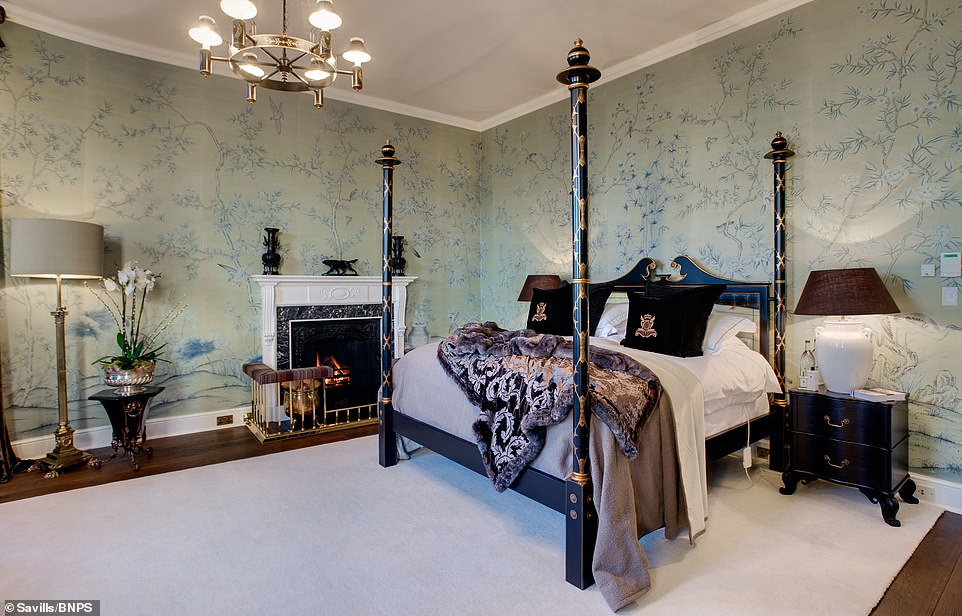 One of the 13 bedrooms in the castle. The design of the house is courtesy of its present owners who used Ralph Lauren wallpaper and soft furnishings 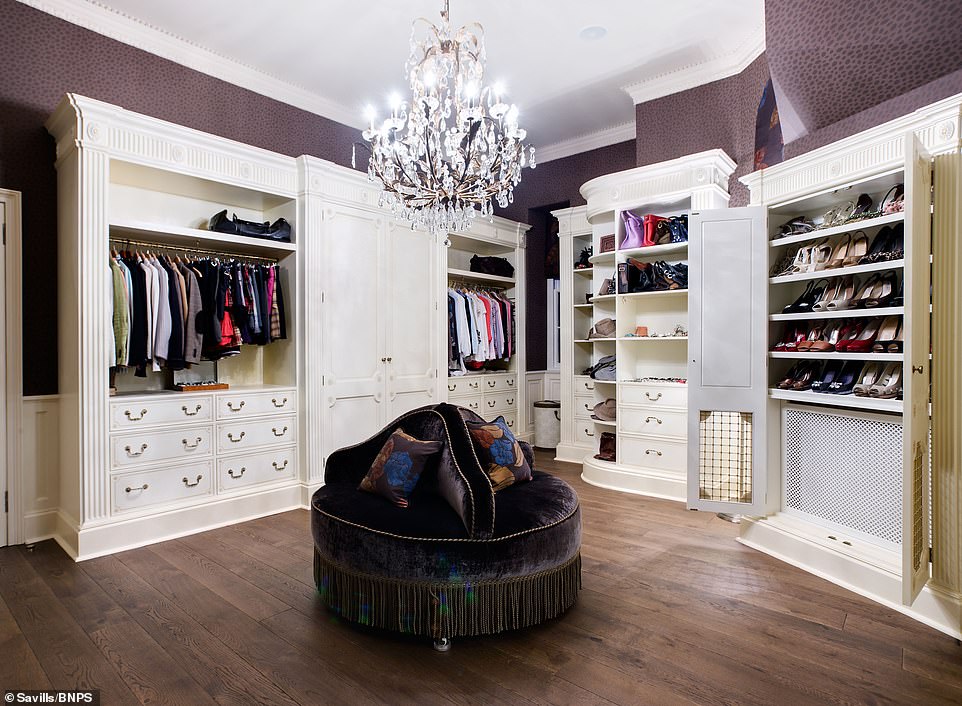 The walk-in dressing room where the lucky new homeowners could neatly put their belongings away. The room features a plush ottoman and traditional-style wardrobes 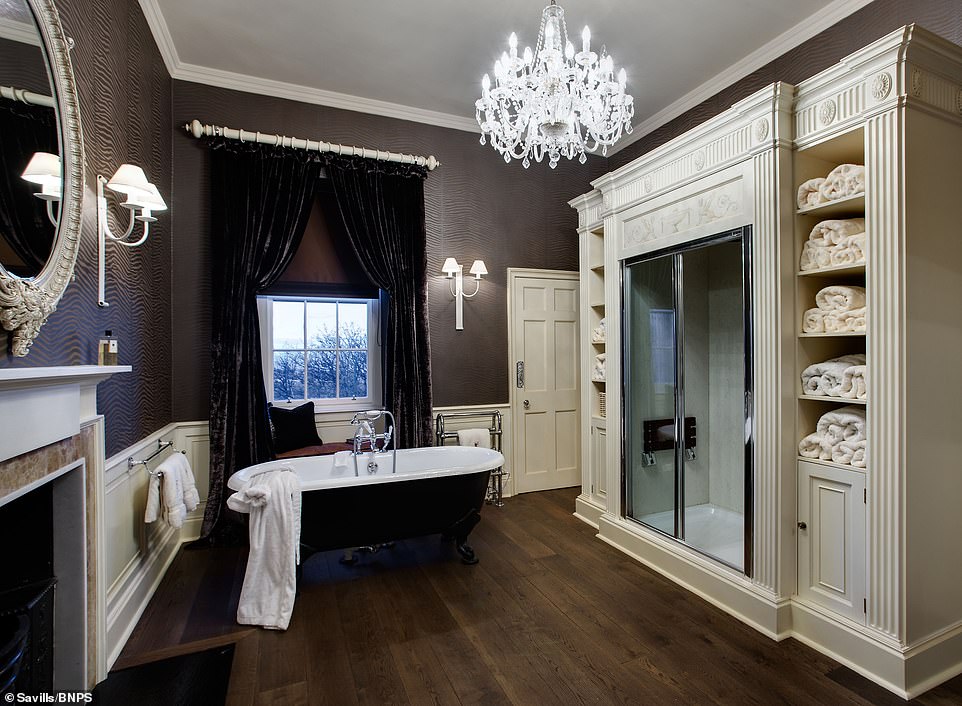 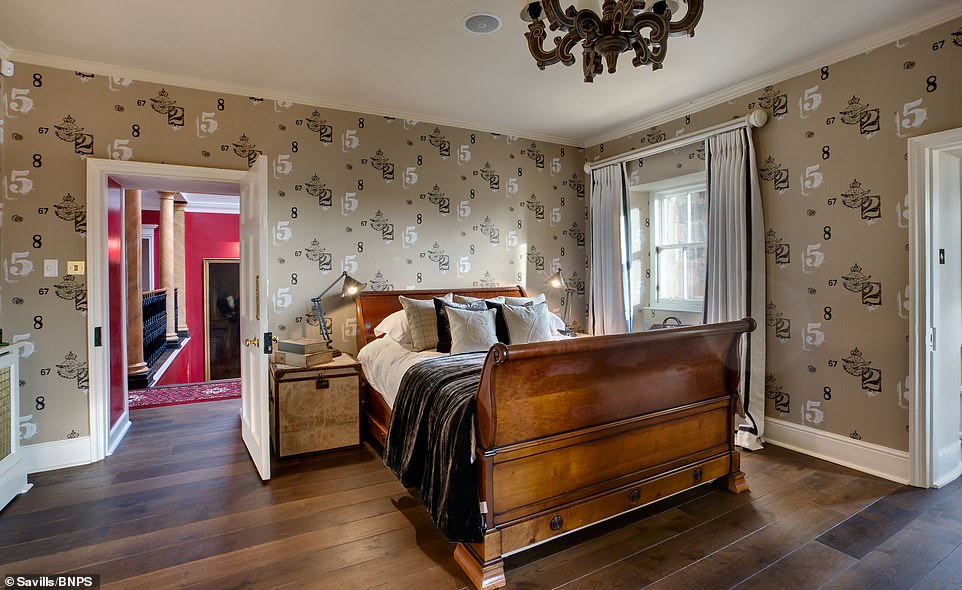 An oak-furnished bedroom leading off the grand red hallway. The castle is situated just ten miles from Edinburgh and enjoys breathtaking views over the sea 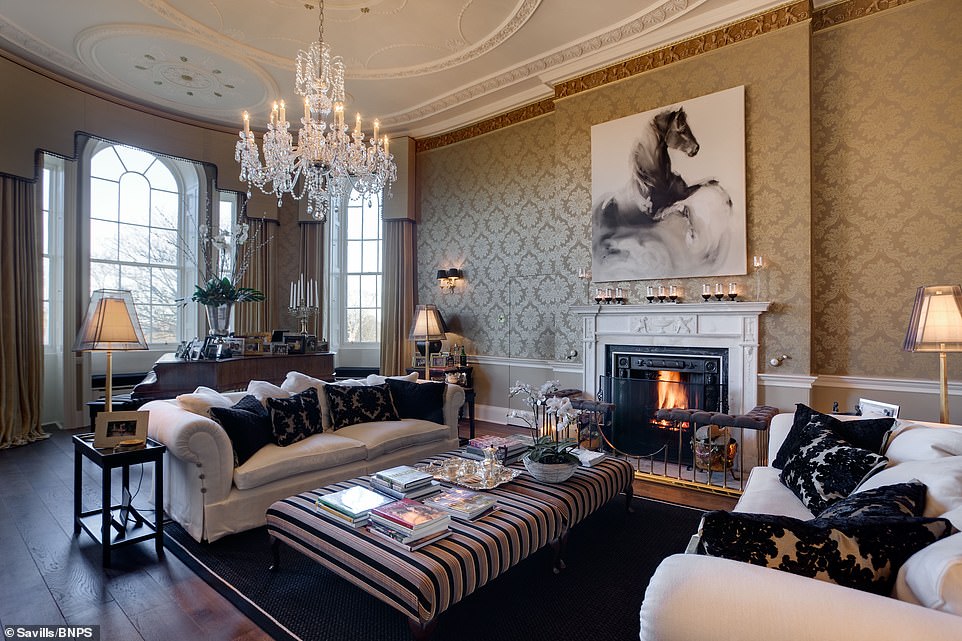 The interior has undergone a makeover in recent years and is decked with Ralph Lauren wallpaper and soft furnishings with designs from Zoffany and Christian Lacroix.

Highlights inside the 13-bedroom castle include a chef’s dream kitchen with a double AGA, a state of the art gym, a vintage billiard room and a cinema.

Beneath the house is a large basement including a fully-stocked wine cellar for one lucky owner. 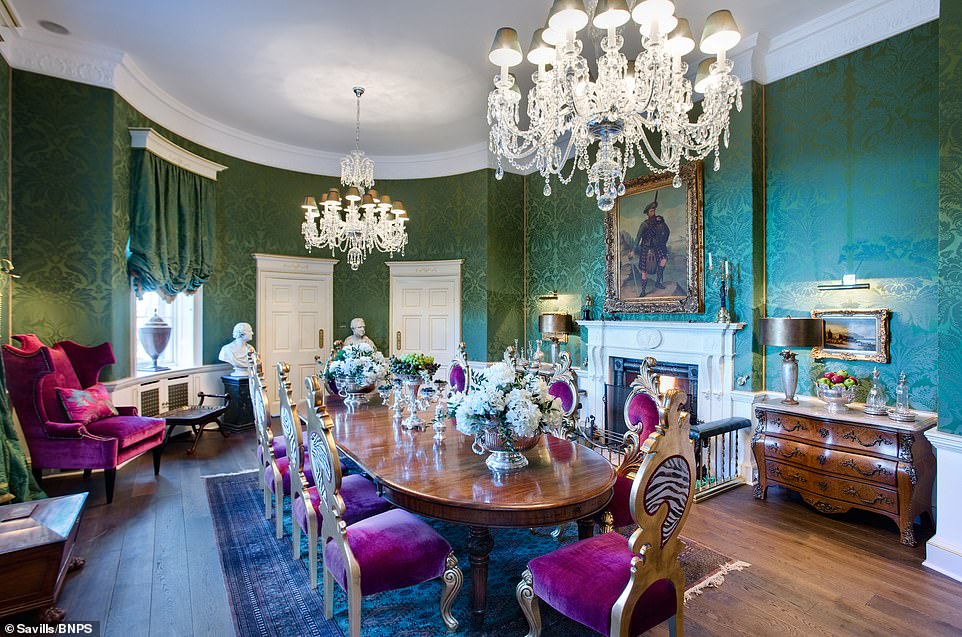 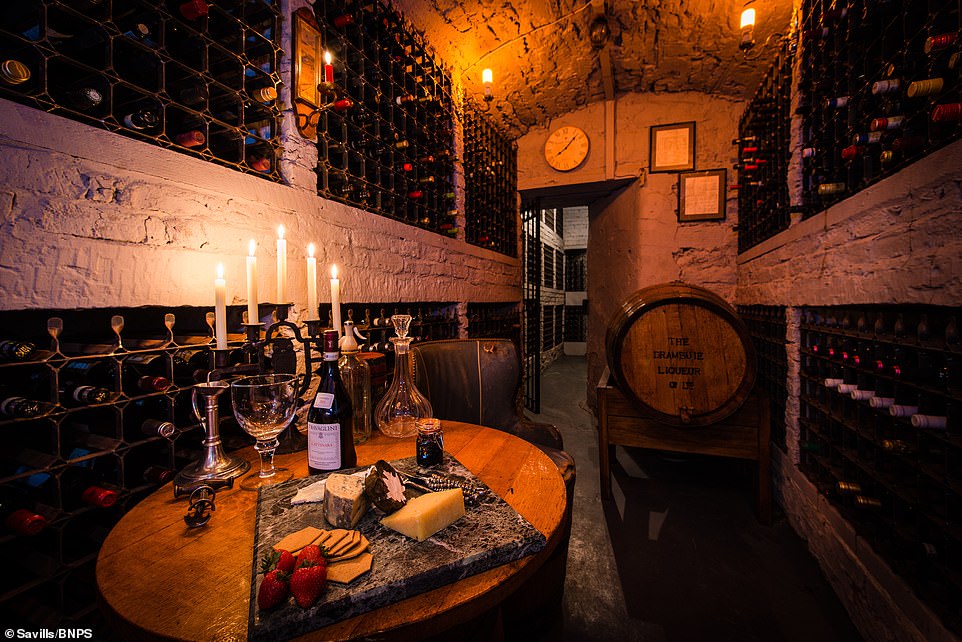 Fancy a tipple? The fully-stocked wine cellar beneath the house features an array of aged bottles and is perfect for entertaining guests

And a helipad in the palace’s original gardens with a pub in the former stables put the castle a turret above the rest.

The first floor is home to the beautiful master suite complete with double dressing rooms and a luxurious bathroom.

There are two further bedrooms and bathroom on this level, while upstairs on the second floor is a refurbished library, a charming study and four further bedrooms – two with en suite bathrooms. 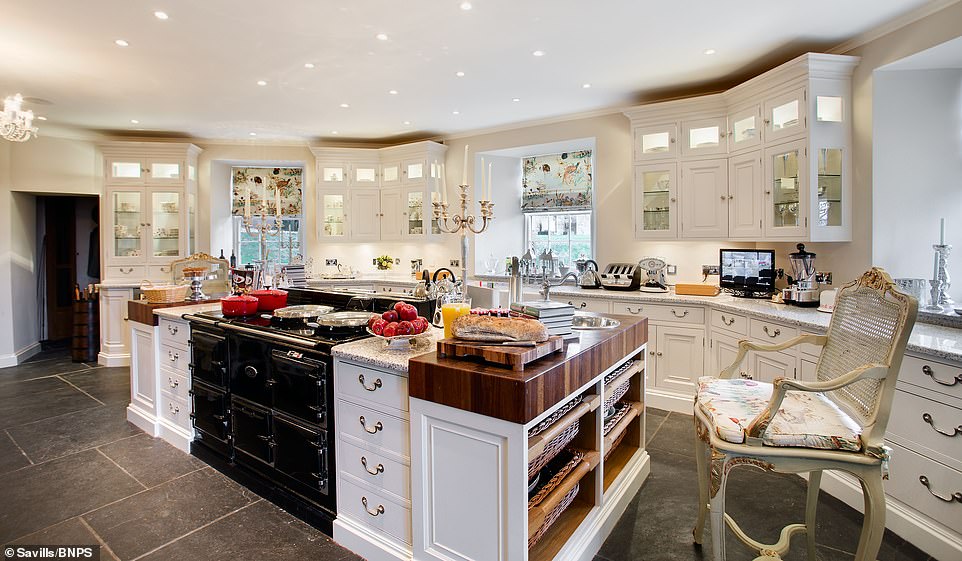 A chef’s dream: The double AGA fitted in the kitchen island with country-style decor. The TV screen (far right) shows the cloud-based system of 16 cameras around the castle 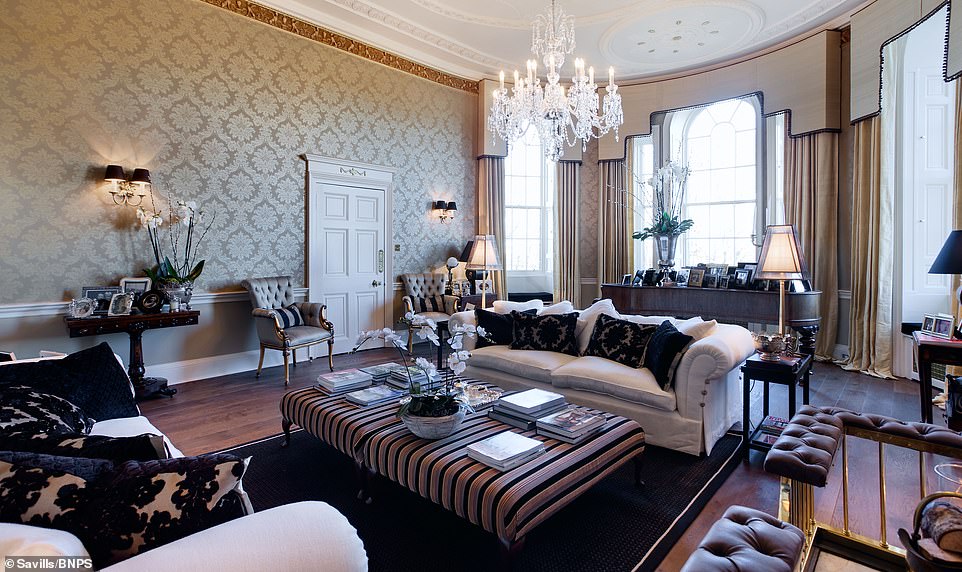 In addition to the main house there are two self-contained apartments situated in the west wing, each with three bedrooms

There is also a secret staircase which leads to a hidden bedroom ‘Hideaway’ suite retreat.

And the 13 acres of grounds more than match the scale and grandeur of the castle, with a 15th century carriage bridge, formal lawns, grazing paddocks, parkland and wildflower meadows. 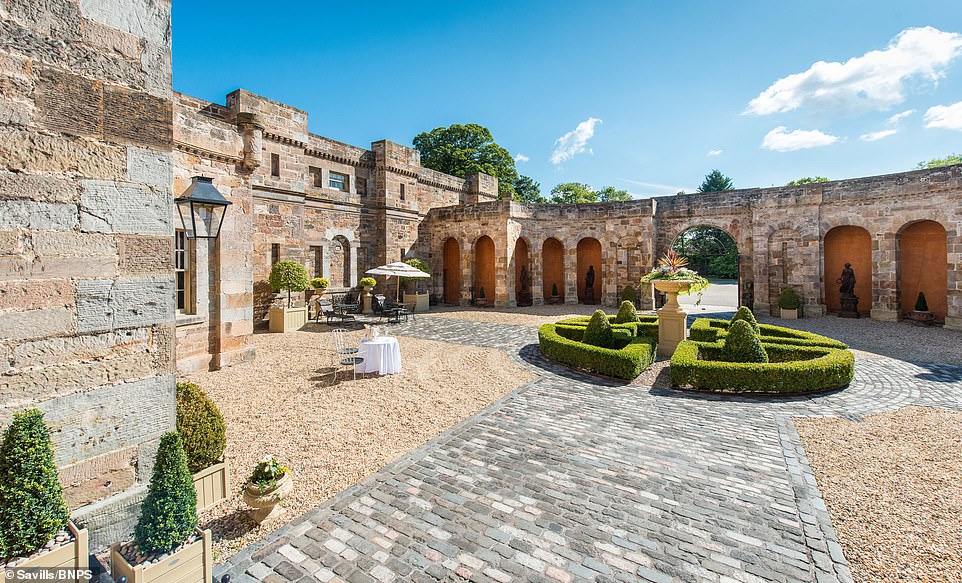 The private courtyards offer a glimpse of the castle’s heritage. Adam designed the castle in keeping with the original palace walls and towers

Seton Castle, considered one of the most exquisite examples of Robert Adam’s work, was erected following the demolition of the palace which was left in ruins after years of neglect.

The palace, which was demolished in 1789, was regularly stayed in by the Scottish Queen and her son James I.

It was eventually torn down after years of neglect and in its place the current castle was built.

The castle was owned by the same family from the late 18th century until 2003.

In 2003 the castle was bought by property investor Mary McMillan for £1.3 million who fixed its ‘crumbling walls and musty smell’. She attempted to sell it four years later to an American real estate agency for £15 million.

However it eventually sold to a buyer in 2007 for a knock-down £5 million, which was a record price-tag in Scotland for a private residence. 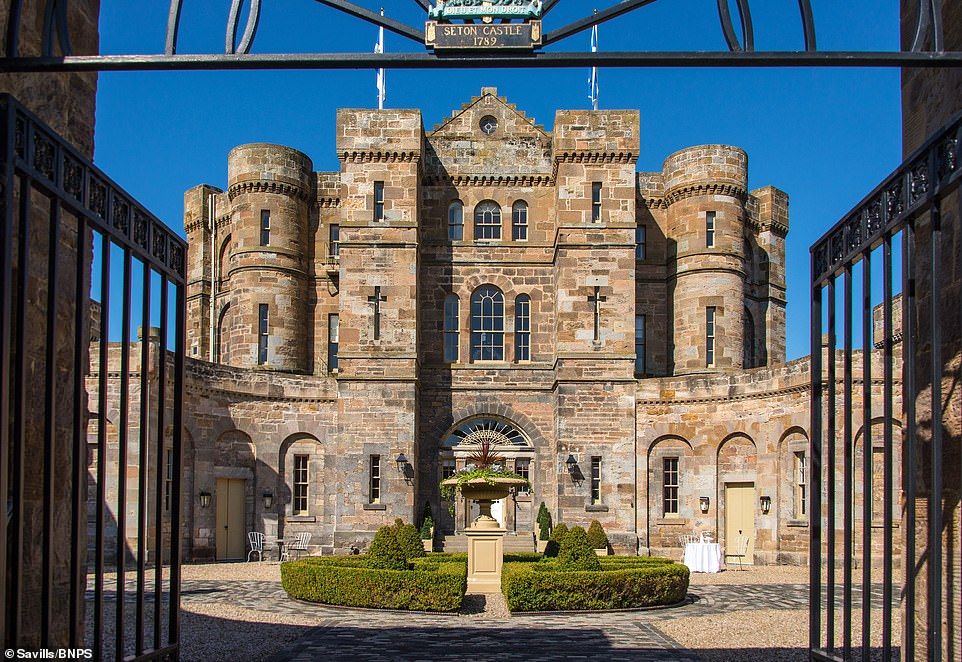 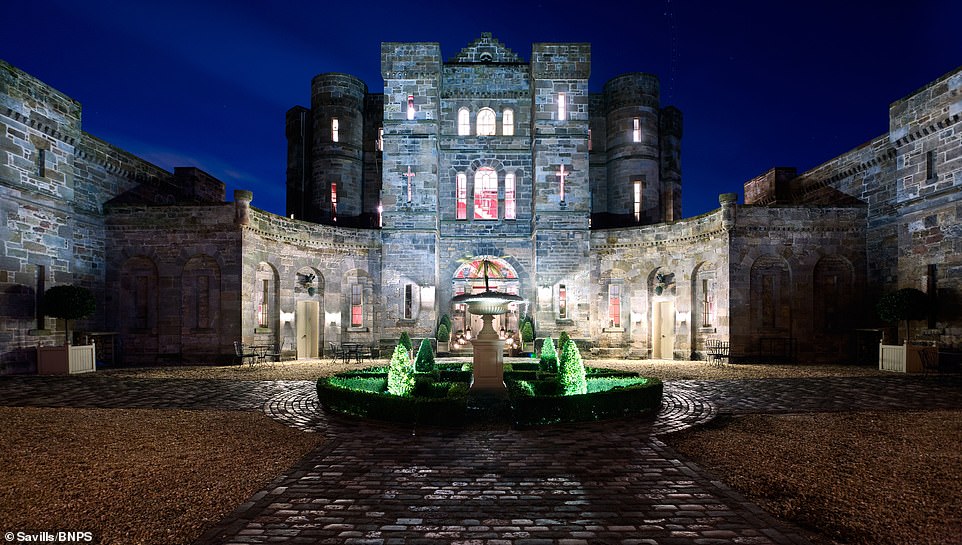 The castle by night: The castle was described as ‘ravishing’ by Savills’ Jamie MacNab with 13 acres of land to enjoy the Scottish countryside 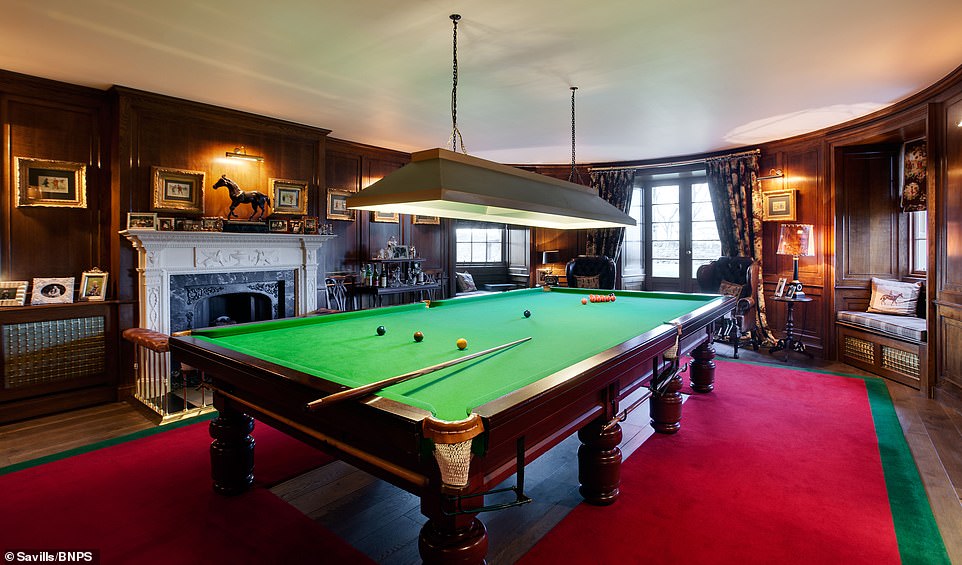 The dimly-lit oak-panelled billiard room with rich red carpet and traditional paintings. The room overlooks the views of the estate 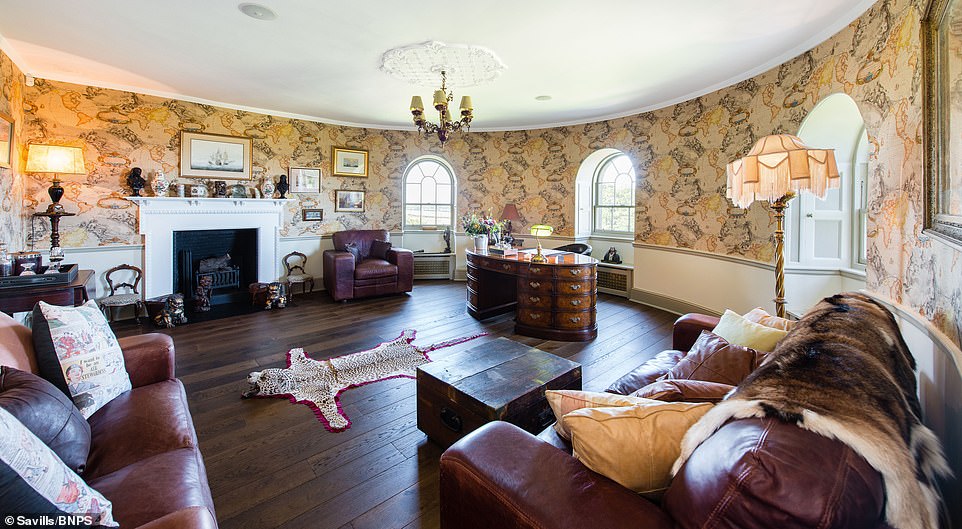 A charming sitting room with a trio of arch-shaped windows and intricate wallpaper. The room also has a traditional fireplace

Jamie Macnab, of Savills, said: ‘Seton Castle is simply one of Scotland’s most significant and ravishing buildings, with eight centuries of history and legend carved deep in its walls.

‘It is undeniably one of Robert Adam’s finest achievements but it is more than that.

‘With the unstinting dedication and investment shown by recent owners, Seton Castle is now also a wonderfully comfortable and welcoming home.

‘It has been exquisitely renovated and decorated, the stone of old now brilliantly showcased with lavish but carefully considered textiles and an exemplary level of finish to suit modern living, while paying homage to Adam, his craftsmen and the generations who have gone before.’