Seven Popeyes workers were fired after footage of a massive brawl in a Milwaukee outlet  went viral on Wednesday.

Video recorded by a customer inside Popeyes shows female and male staff hitting each other as one worker tries to break up the fight on the restaurant floor.

The shocking incident happened at Popeyes near 76th and Good Hope Road around 9.30pm.

Richard Fourte, who recorded the footage, said he didn’t want to get his food at the drive-thru because of a long queue so he went inside instead.

‘They ran to the back by the grills, OK. Now, there was a fight back there. I didn’t get that one on tape.

‘Honestly, I wasn’t even going to get the chicken sandwich,’ Fourte explained. He can be heard in the video saying: ‘Break that s**t up’ as the staff continue to pull out of one another.

He did not get his food but WITI reported that seven workers were fired as a result of the melee. Police did arrive at the restaurant later but they claimed no weapons were involved and no arrests were made as a result.

In a statement, the franchise owner at Popeyes claimed: ‘This was an unfortunate, isolated incident which we take very seriously.

‘The dining room was closed immediately after the altercation at 9:30 p.m. As a result of this, 7 employees were terminated from the company, including the manager on duty.’

The altercations are the latest in a series of disturbing incidents, including a fatal stabbing, to have occurred at Popeyes restaurants amid the return of its popular chicken sandwich, which has sparked chaos nationwide.

A Popeyes employee has been arrested after being caught on video body-slamming a customer outside a Tennessee store. 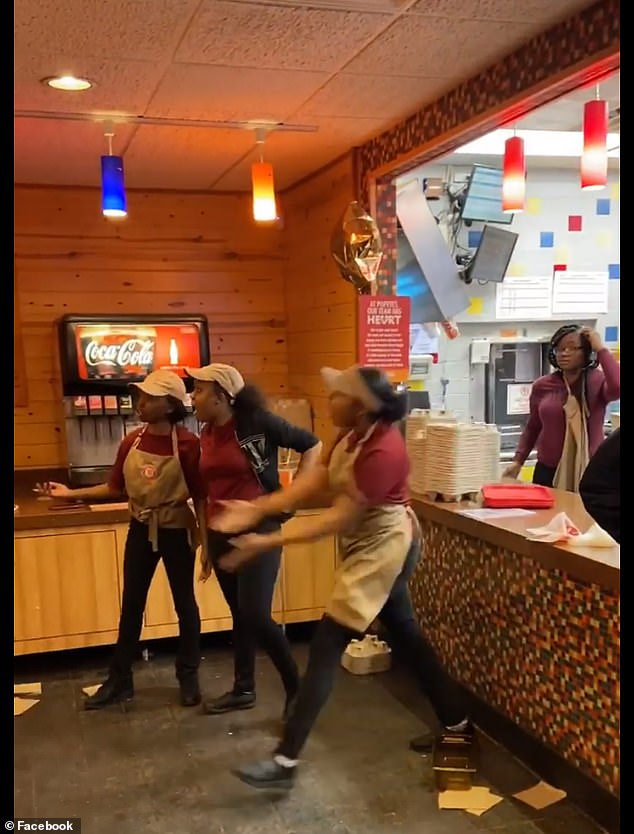 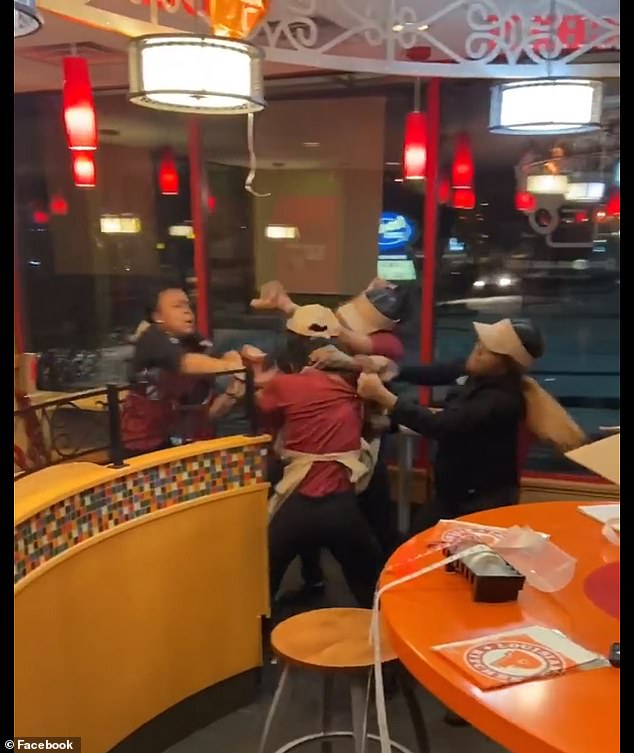 Deriance Ra’Shaiel Hughes, 29, has been charged with felony aggravated assault after allegedly attacking Debra Staggs in a dispute over her check.

Rocky McElhaney Law Firm which is representing Staggs, 55, said she was trying to get a refund after being charged twice for her $13.11 meal.

Video of the attack quickly went viral with the footage showing people chasing Staggs outside the restaurant. She is then body slammed to the ground by a man who is now believed to be Hughes.

Staggs has been left with a broken leg, nine fractures in her elbow and six broken ribs.

She has already had two operations and is expected to need months of rehabilitation. 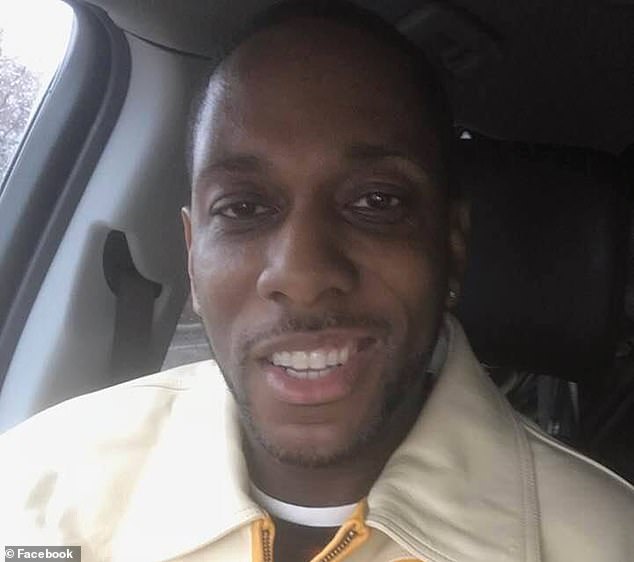 Richard Fourte, who recorded the footage, said he didn’t want to get his food at the drive-thru so he went inside instead. 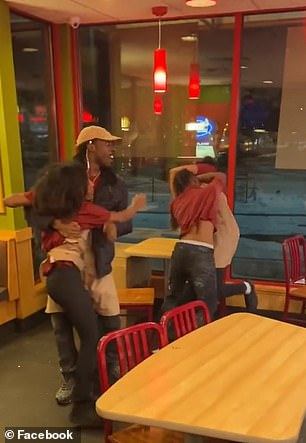 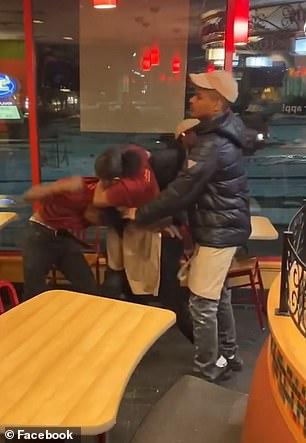 Last week footage emerged of a cashier and a customer are seen throwing trays at each other at a Popeyes restaurant in San Antonio.

In another unidentified outlet a male customer is seen throwing an entire bucket of tea over a worker after he reportedly couldn’t get a chicken sandwich.

The first video, which has gone viral with more than 250,000 views, shows a cashier growing irate at a young female customer and throwing a tray at her.

The customer is then heard screaming at the female cashier and moves to jump over the counter, as the worker says ‘B****h look behind you.’

She proceeds to throw the tray back at her, before a man in a veteran’s cap intervenes and pulls the customer away. 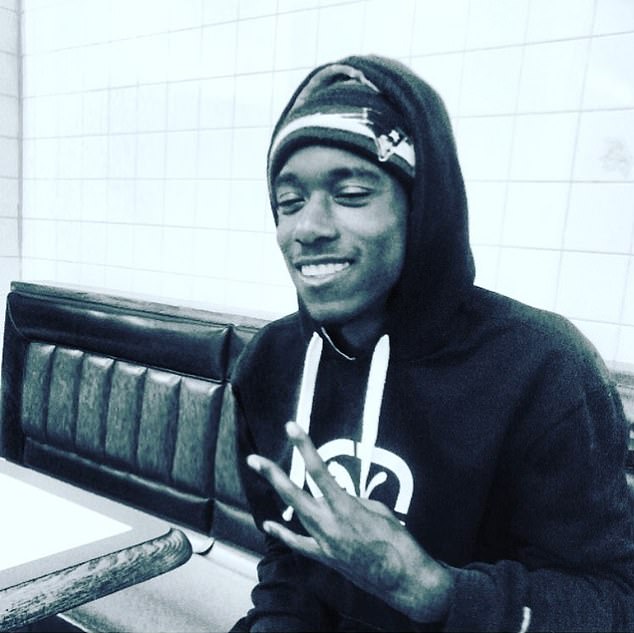 Ricoh McClain was named as the suspect in the stabbing death of Maryland Popeyes customer Kevin Tyrell Davis (pictured), 28, on Tuesday evening 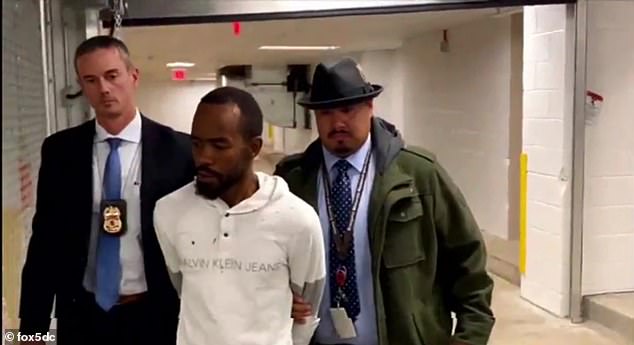 @Espinosa35_, the twitter user who posted the video, claimed: ‘Lmaooo yoooo San Antonio was Wild for the Popeyes chicken sandwich today … this was on the southside.’

The incident occurred at Popeyes at 2225 SW Military Drive around 3.45 pm on Tuesday, a bystander told KSAT.

It came after a Popeyes customer was stabbed to death during an argument in a line for the restocked chicken sandwich after its return to the menu.

He was wanted on murder charges in the death of 28-year-old Kevin Tyrell Davis and arrested at the home of an acquaintance in Capitol Heights on Wednesday.

Police Chief Hank Stawinski has said only 15 seconds elapsed from when the November 4 altercation started to when it ended with the stabbing.

Stawinski said Davis had been ‘methodically’ cutting the line for the re-released chicken sandwiches for 15 minutes before McClain confronted him.