Seven schools and a childcare centre in Melbourne have been shut down this week after being linked to COVID-19 cases.

Parkwood Green Primary School in Hillside, in the city’s north west, has closed on Tuesday after a young student tested positive. Contract tracing is underway.

Guardian Childcare Centre in Abbortsford will also be closed until Wednesday after a child tested positive.

The school closures come as support for Victorian Premier Daniel Andrews plummets over his handling of the coronavirus crisis.

Just 40 per cent of Victorians surveyed in the latest Newspoll were satisfied with Mr Andrews’ performance, down from 58 per cent in April.

A quarter of respondents said he had handled the coronavirus badly, compared with 11 per cent two months ago. 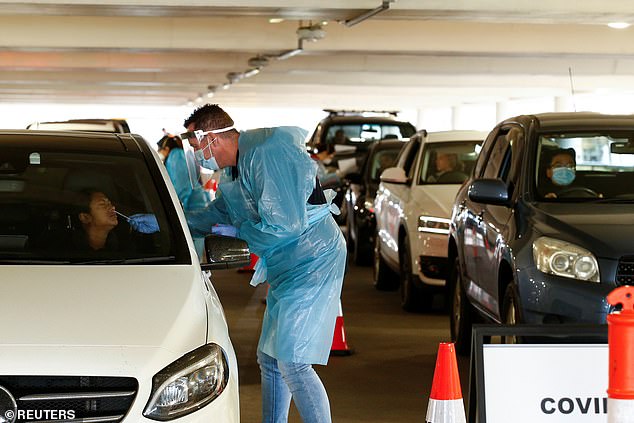 Victoria recorded 75 new cases on Monday, taking its tally to 367 new cases in a fortnight. Pictured: A coronavirus drive-through testing facility in Melbourne

It comes after confirmation a student at Ascot Vale Primary School and another at Essendon Keilor College attended classes last term while infected.

‘We’ve got many cases across the inner northern suburbs and the western suburbs of Melbourne, but not exclusively and it’s important to reiterate to the community that you are not immune from catching coronavirus by virtue of the postcode that you live in,’ Ms Mikakos said.

However, the school closures come amid the school holidays, making effects minimal.

Victoria recorded 75 new cases on Monday, taking its tally to 367 new cases in a fortnight.

Of those, 14 were linked to already known outbreaks, one is from hotel quarantine and 23 are under investigation.

Six new cases are believed to be from community transmission.

Of the new cases, just one was acquired overseas.

The majority of the latest cases have been locally acquired within 10 Melbourne suburbs.

By contrast, there were seven new cases in NSW and three in South Australia on Monday – all people returning from overseas. Other states recorded no new cases.

Prime Minister Scott Morrison said the federal government will do everything it can to help contain the growing coronavirus outbreak in Victoria.

Mr Morrison said there will be ‘no stone unturned and no resource left unapplied’ to stop the spread.

‘We have seven states and territories at the moment in Australia, where there is either no or virtually no community transmission,’ Mr Morrison told reporters on Monday.

‘What that means is resources that are available in other states can also be deployed to assist.’

He said he would speak to Victorian Premier Daniel Andrews about the possibility of lockdowns in the worst-affected suburbs but stressed the Labor leader was the ‘final arbiter of what steps they take’.

Victorian health authorities, with the help of the Australian Defence Force, are conducting a testing blitz in the 10 suburbs and are waiting on more results before deciding on any further measures to contain the virus.

‘It will get worse before it gets better,’ Victorian Chief Health Officer Professor Brett Sutton said of the state’s case numbers.

About 70 more ADF members landed in Melbourne overnight and will be deployed to testing clinics. 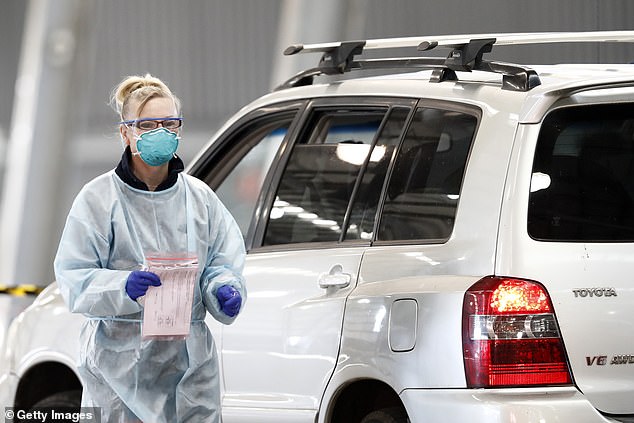