A Honduran national here illegally is accused of raping his stepdaughter in Maryland, which is the seventh such case in the area in a number of weeks.

Emilio Carrasco-Hernandez, 37, was deported from the United States less than three years ago but reentered illegally on an unknown date, U.S. Immigration and Customs Enforcement (ICE) officials told WJLA.

His alleged victim, 15, spoke to Montgomery County police and said that Carrasco-Hernandez sexually assaulted her several times between August 16 and August 25.

Emilio Carrasco-Hernandez, 37, (pictured), is accused of raping his stepdaughter in Maryland, which is the seventh such case involving an undocumented migrant in the area in a number of weeks

She alleged that she was unable to use the bathroom after one of the assaults because it was ‘very painful’ and left her with a ‘stinging’ feeling.

On one occasion, the victim claimed she was in her grandmother’s bedroom when Carrasco-Hernandez entered.

He proceeded to pull her pants and underwear down and began biting her shirt.

The 5-foot-7-inches tall, 200-pound man then slowly walked the victim to the bed’s edge and took his pants off.

‘Victim A stated that she could not move and Emilio Carrasco-Hernandez was squishing her with his body,’ according to court documents obtained by WJLA.

The victim’s mother, who is Carrasco-Hernandez’s wife, claimed she heard noises in the bedroom and opened the door to a distressing scene.

She said she immediately told him to leave the house and then called police.

‘Everything is coming down for me. It’s hard for me because that’s my daughter and that’s my husband… I’m mad with them both.’ 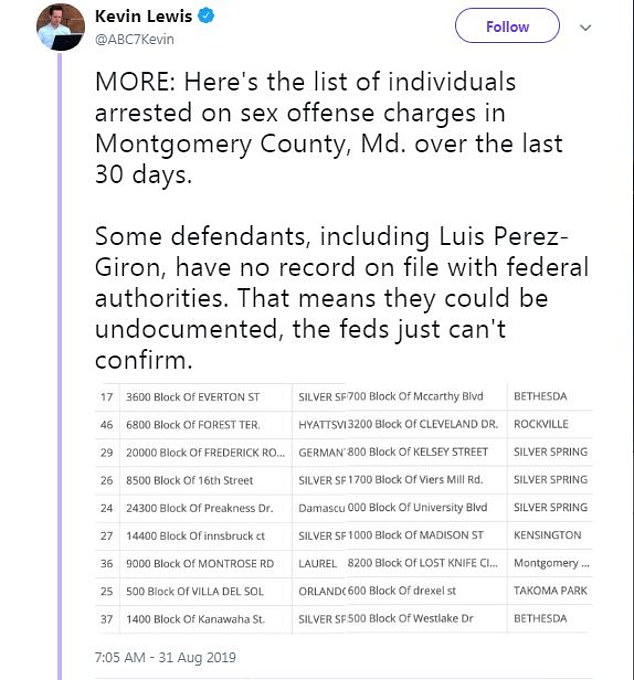 She told the outlet that she believed the sex was ‘consensual’ but acknowledged that the age of consent in Maryland is 16.  The victim’s mother said she believed her husband’s drinking may have fulled the incident.

‘My husband, he has trouble with his drinking. He told me he was very drunk and told me he now knows it wasn’t right.

‘But he told me that in the moment, he wasn’t thinking what he was doing. You, know how it is when someone’s drunk.’

In a statement to WJLA, ICE officials said that Carrasco-Hernandez was previously deported in April 2017, but re-entered the United States ‘sometime thereafter.’

It was reported that he could face up to 56 years in state prison in convicted on all charges.

He also faces up to 20 years in prison for re-entering the U.S. having been previously deported, according to an ICE official.

Carrasco-Hernandez was working as a dishwasher at an unknown local business up until his arrest.

Court documents state that he has three children who include an 11-month-old daughter.

It was reported that an executive order was signed last month that designated the county a ‘sanctuary jurisdiction.’

This means that county agencies, including police departments, do not have to cooperate with ICE.