A string of severe storms and tornadoes will pummel Louisiana through the Tennessee Valley on Sunday, affecting some 4.5million people.

As of early Sunday morning there were over 60 reports of severe weather from Texas to Kansas with softball-sized hail reported in western Texas.

The major storm system will bring a widespread risk of flash flooding in parts of the Tennessee Valley while tornadoes are forecast to raze through parts of the East Coast on Monday.

Birmingham, Alabama, and Jackson, Mississippi are anticipated to be hit the hardest by the weekend storm which will continue into Monday morning.

A large and dangerous tornado has already been reported in Monroe, Louisiana around 11.45am CDT that damaged 20 homes and downed power lines. A 69mph wind gust was recorded at the Monroe airport.

By Sunday afternoon more than 42,000 homes and businesses in Lousiana were without electricity as of 1.45CDT and more than 18,000 customers in Texas had no power, according to Weather.com.

The string of severe storms tornadoes will affect more than 4.5million people from Louisiana through the Tennessee Valley on Sunday. A large and dangerous tornado has already been reported in Monroe, Louisiana (above) around 11.45am CDT that damaged 20 homes and downed power lines 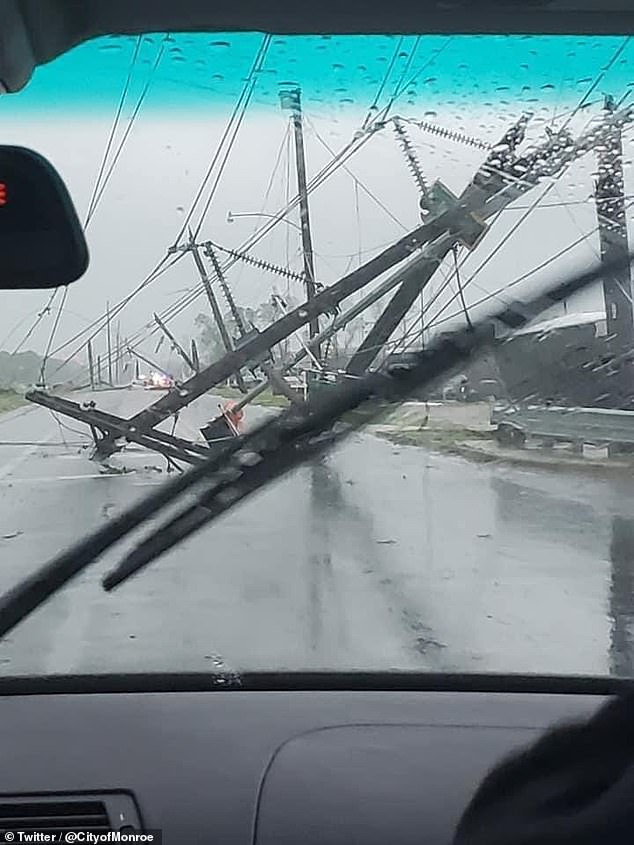 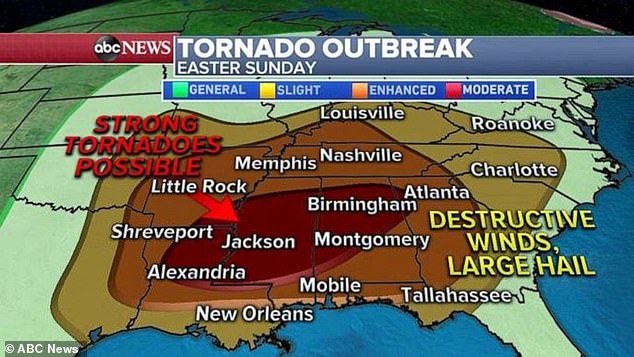 Birmingham, Alabama, and Jackson, Mississippi are anticipated to be hit the hardest by the weekend storm which will continue into Monday morning

A large part of the US is under some form of weather alert due to the storm system that reaches across the upper Midwest and wind alerts span the Great Plains to the North East.

Thunderstorms are anticipated to blow through Texas – Austin, Waco, and San Antonio – first before moving towards Arkansas and Louisiana where very strong winds are possible.

In Texas photos have emerged of massive icy pieces of hail, some as big as a baseball. 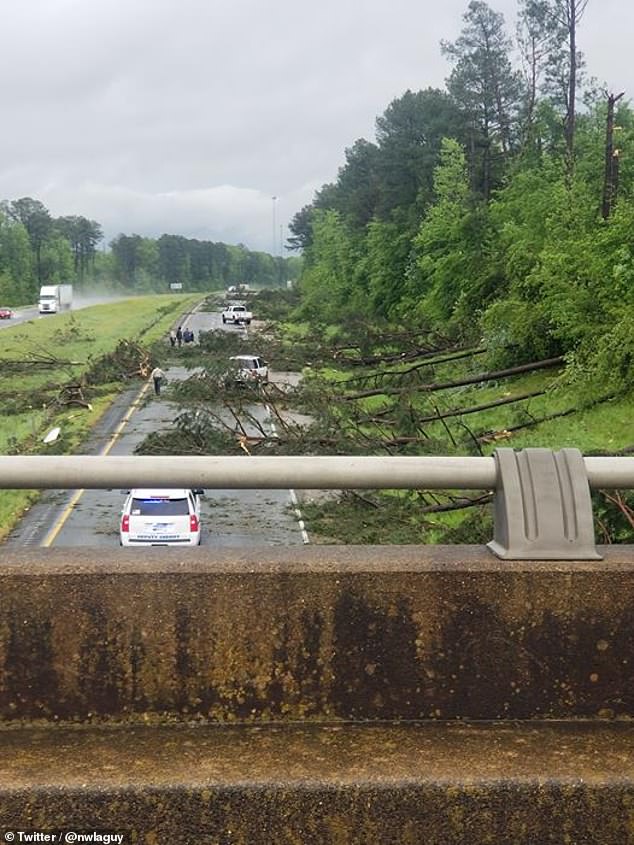 Trees were downed along the Westbound lane of the I-20 highway in Arcadia, Louisiana in the morning 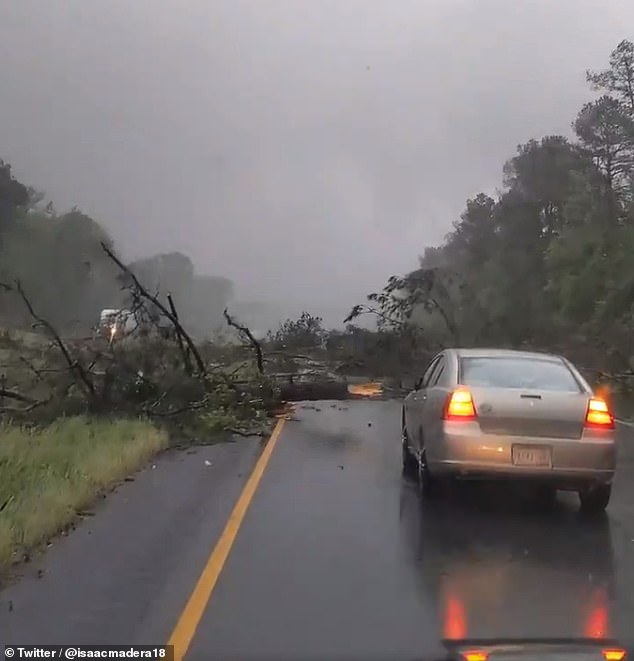 The severe storms hit Louisiana early, downing trees along the I-20 highway in Arcadia early Sundayd 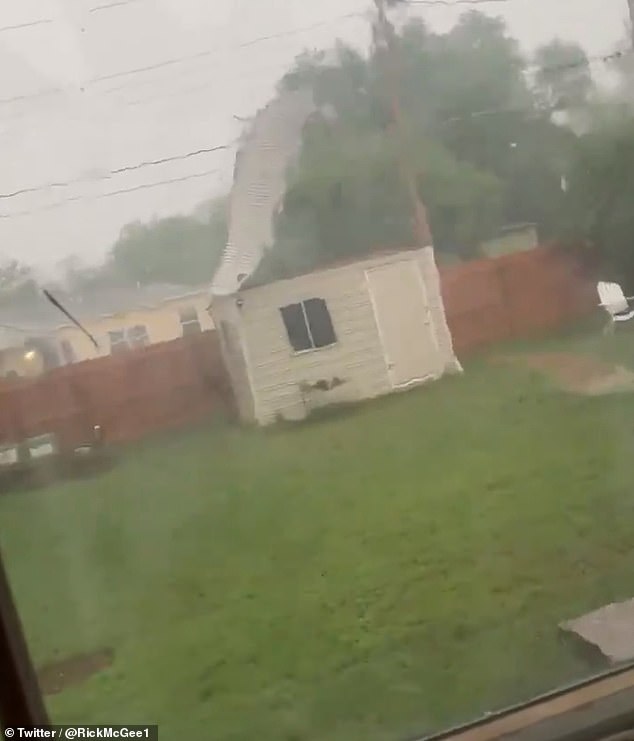 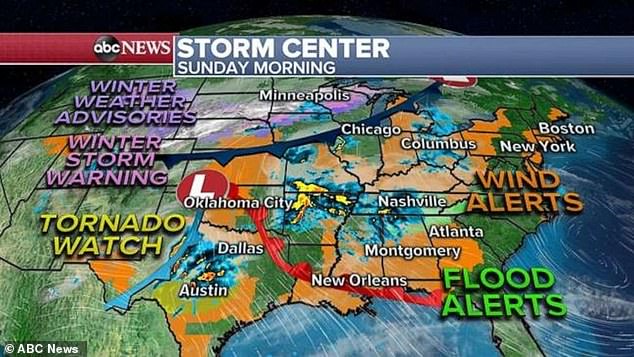 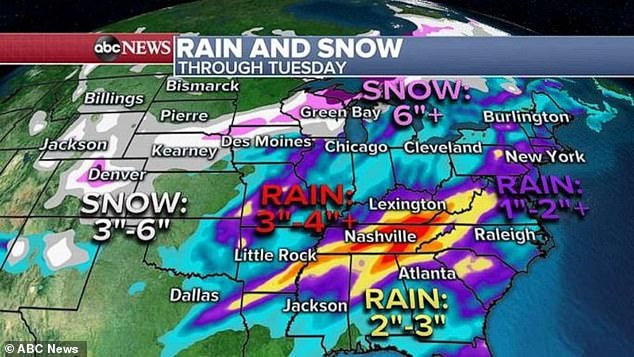 Snow will hit northern Texas, which Arkansas, Tennessee, and Mississippi will see between three to four inches of rain

Later Sunday evening the storm will hit Mississippi and Georgia. A tornado risk is In this region overnight.

The storm warnings are in place through Monday morning. By morning the twisters are expected to swirl into Georgia, the Carolinas and Virginia.

From northeast Louisiana, southeast Arkansas, into northern and central Mississippi there’s a ‘particularly dangerous situation’ warning in place through 8pm CDT – meaning it is highly likely several strong tornadoes with damaging winds and hail will hit the area.

The National Weather Service in Jackson, Mississippi warned residents to prepare for the chance of relentless tornadoes with wind gusts up to 70 mph and hail the size of tennis balls

‘This could be one of our bigger events we’ve had in a long time around here. Take this seriously,’ weather service forecaster Gary Goggins said on Facebook.

Mississippi has opened tornado shelters in light of the incoming storms and is encouraging residents to wear masks , use hand sanitizer and stay six feet apart. 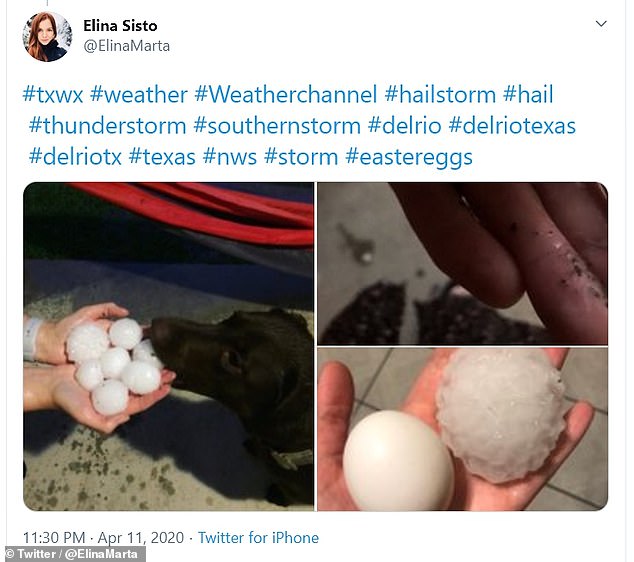 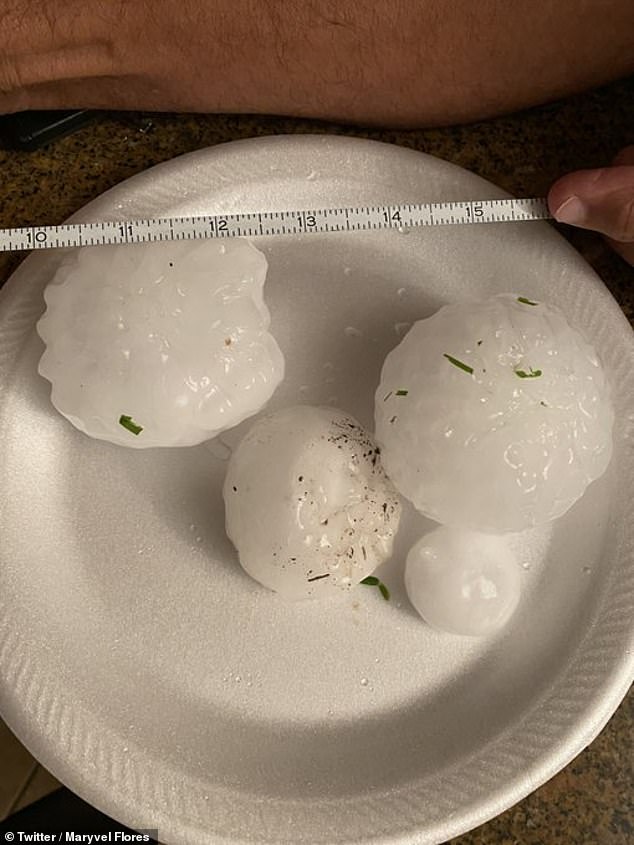 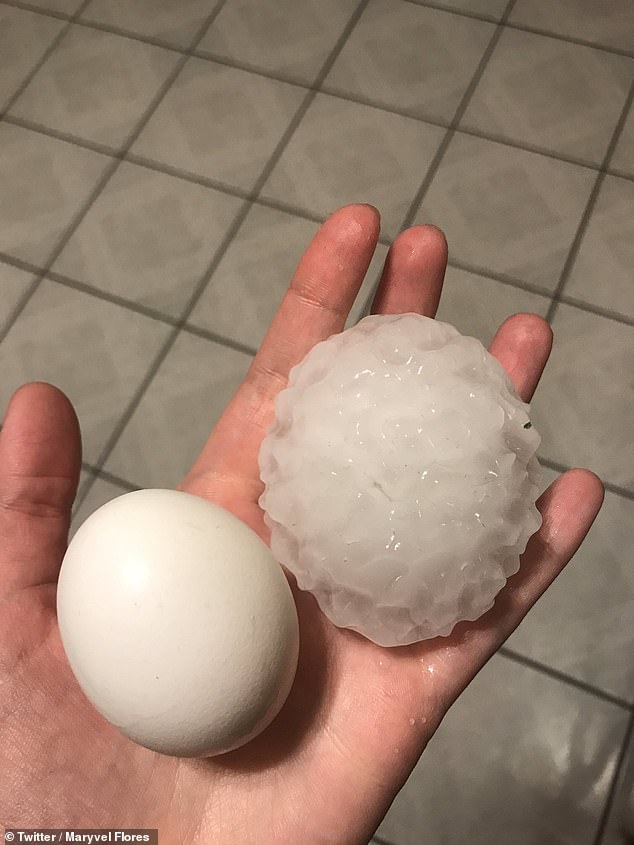 Officials in Alabama and Mississippi warned the public to seek shelter from the tornadoes, but noted to take care in light of the coronavirus pandemic.

However, not all state shelters will be open, they will differ according to county as per the decision of local officials.

‘Both the National Weather Service and the State Public Health Department remind Alabamians that the use of shelters and other resources take precedent, should the need arise,’ Alabama Gov. Kay Ivey. 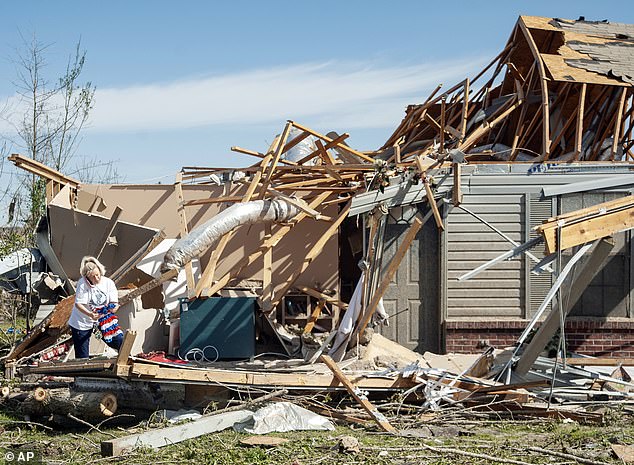 Arkansas braces for more tornadoes: Arkansas residents are bracing for more tornadoes on Sunday after the state was already hit by twisters lat week. Kim Carmichael picks up items from her daughter’s house that was damaged from a tornado the previous night on Thursday, April 9  in Harrisburg, Arkansas 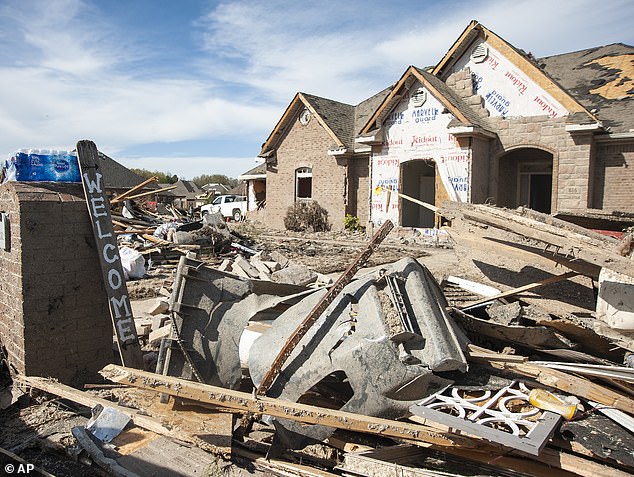 A welcome sign pictured leaning against a mailbox amongst piles of tornado debris in front of a damaged home in Jonesboro, Arkansas on Sunday March 29 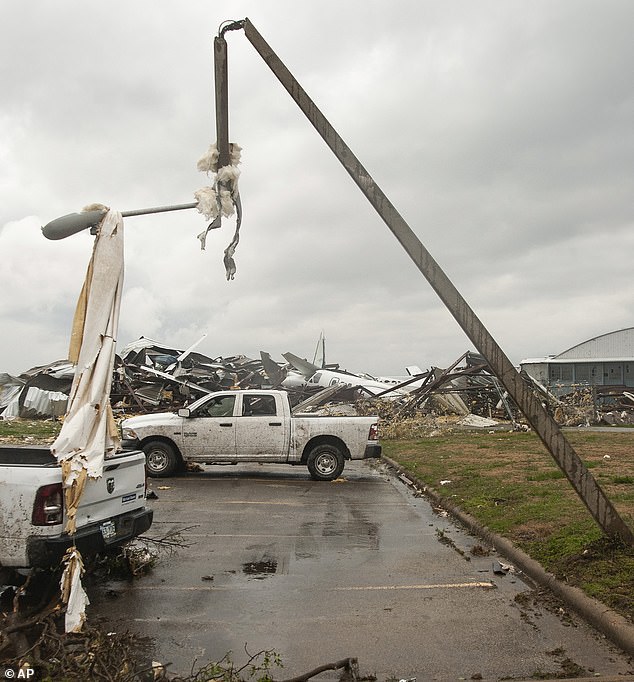 Already reeling from twisters: Arkansas has already suffered from several tornadoes this month. A damaged light pole draped with debris after a tornado pictured above on Saturday March 29 at Jonesboro Municipal Airport 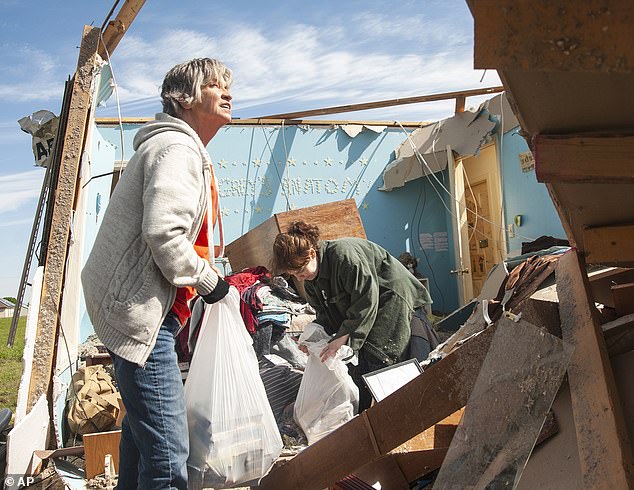 Stephanie Fatheree, right, salvages items from her house damaged from the tornado the previous night with help from a neighbor on Thursday, April 9

Mayor Thomas Spraggins of Alexander City, Alabama warned his constituents to find a safe place to shelter as public buildings won’t be open in light of the COVID-19 pandemic.

‘I’ll be praying for everyone to have a safe and happy Easter,’ he said.

By Monday the severe thunderstorms will progress eastward stretching from northeastern Florida to parts of the mid-Atlantic, possibly reaching Pennsylvania and Washington D.C., according to Weather.com.