More than 70 million people are preparing for a weather system that could bring ‘very strong’ wind gusts across Northeast states where emergency field hospitals have been set up in response to the coronavirus pandemic.

According to the National Weather Service’s Storm Prediction Center, damaging wind gusts between 40-50mph may occur around midday along the Interstate 95 corridor from Washington, DC, to New York City.

Meteorologist Janice Dean said on Fox & Friends that ‘we could actually have power outages in big cities like New York City, Philadelphia and DC’.

That could pose a huge threat to the Big Apple where a field hospital full of tents has been set up in Central Park as confirmed cases of the coronavirus increased rapidly in the city. 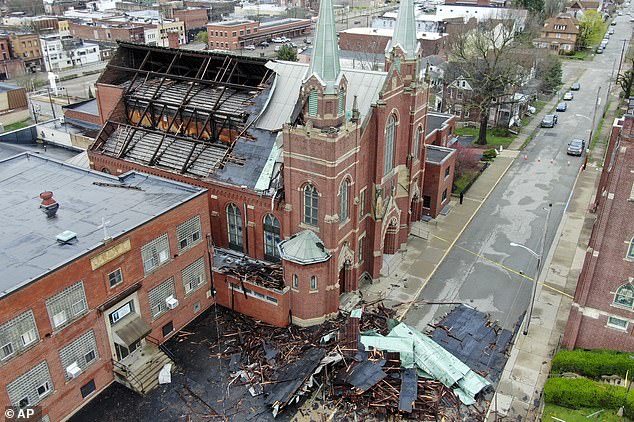 Thousands of utility customers in Pennsylvania were already without power Thursday, a day after severe thunderstorms spawned two small tornadoes. Those storms, which came through Wednesday morning, tore the roofs off of a church (pictured) in New Kensington

New York City has become the epicenter for the virus in the US with more than 80,000 coronavirus case and more than 4,200 deaths.

Thousands of utility customers in Pennsylvania were already without power Thursday, a day after severe thunderstorms spawned two small tornadoes.

Those storms, which came through Wednesday morning, tore the roofs off of a church and a brewery in New Kensington and blew away a hangar at the Arnold Palmer Regional Airport.

In states further north, a late season storm is bringing the possibility of snow — some of it heavy — to parts of Maine, New Hampshire, and Vermont.

The storm will intensify Thursday afternoon, bringing rain along the coast and snow in western and northern Maine, said Derek Schroeter from the National Weather Service (NWS) in Gray.

As much as a foot or more of snow could fall on higher elevations of Maine, New Hampshire, and Vermont. 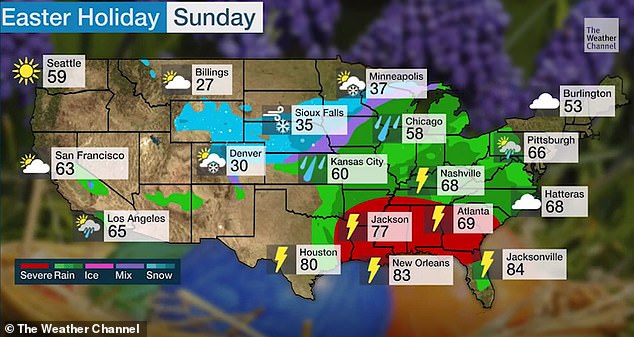 Severe weather will continue through the weekend in the South, particularly in coronavirus hotspots like New Orleans 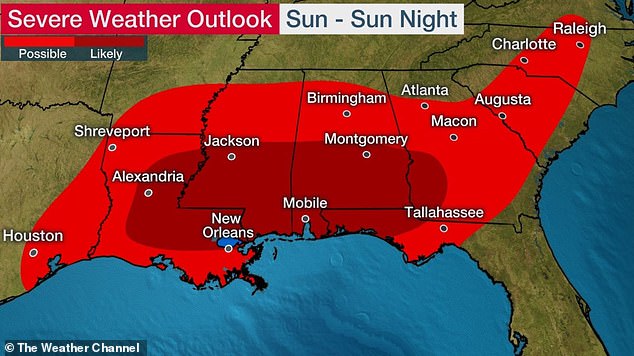 While millions are practicing social distancing in their respective states, some will likely have to choose between sheltering in place against the coronavirus and sheltering at actual shelters from storms.

April through June is peak tornado season in the US, which averaged about 1,250 tornadoes annually in the decade ending in 2010, according to statistics from NOAA’s National Centers for Environmental Information.

The Plains, the Midwest and the Southeast are particularly vulnerable, with a six-state region including Kansas, Missouri, Oklahoma, Arkansas, Tennessee and Texas most likely to get hit by strong twisters, the records show.

Emergency planners, health officials and forecasters are generally advising people to take their chances with the virus when a tornado is headed their way.

‘We should not let fear of the coronavirus blind us to the danger of an imminent tornado,’ Kansas Gov. Laura Kelly said in a statement. ‘If you have to seek refuge in a community shelter, try to practice social distancing and other precautions as much as possible to minimize your risk.’

The National Weather Service and the Alabama Department of Public Health put it more bluntly in a joint statement as severe weather approached last month while virus worries were growing.

‘If a warning is issued for your area, you are more likely to be affected by the tornado than the virus,’ it said.

Tornado season eventually gives way to hurricane season, which begins June 1, and officials along the coast already are considering what to do should a tropical storm system draw near while the region is still under lockdown because of COVID-19.

In Panama City, Florida, which was devastated by Hurricane Michael in October 2018, emergency services director Frankie Lumm said he plans to open more shelters than usual and have more rooms in each than he typically does, to allow for social distancing.

But even that won’t be simple: The area is still low on shelters because schools are still being rebuilt after Michael, he said, and providing staffing for additional shelters could be a challenge during a pandemic.

‘The rock meets a hard place if I begin to have a hurricane while this is still in full mode,’ Lumm said.

Meanwhile, the midcoast and eastern Maine will be lashed by winds gusting to upward of 50mph, Schroeter said.

Central Maine Power (CMP) is urging customers to be prepared for power outages. The company has about 80 CMP line crews, 85 contract crews and 100 tree crews ready to respond, officials said.

Another concern is coastal flooding, Schroeter said. The storm should be winding down by mid-morning on Friday, he said.

In the south, severe thunderstorms with very large hail and damaging wind gusts are expected from the Hill Country into south and southeast Texas this afternoon into early tonight.

Forecasters also warned of a severe weather outbreak with the possibility of strong, long-track tornadoes on Easter Sunday in parts of Alabama, Georgia, Louisiana and Mississippi.

In the Midwest, severe storms with high winds, hail and possible tornadoes caused damage to dozens of homes and businesses in parts of Indiana and Arkansas, authorities said.

In the central Indiana community of Mooresville, about 15 miles southwest of Indianapolis, bricks were scattered along the town’s main downtown thoroughfare and traffic was blocked by debris.

Police Officer Brock A. Chipman said the storm knocked the second story off a two-story vacant building, and one woman was slightly injured after power lines fell on her car.

Indiana’s stay-at-home order amid the coronavirus pandemic likely kept people out of danger as the storms moved through, tearing roofs off some buildings and damaging downtown storefronts, said Division Chief John Robinson of the Mooresville Fire Department.

‘We have some small restaurants downtown here and folks would be in those under normal circumstances. Luckily, because of the virus everyone was gone. Honestly, that´s sort of a blessing,’ Robinson said.

More than 100,000 utility customers in Indiana lost power following the storms across central and southern Indiana.

About 62,000 remained without power as of 7.30am Thursday, with Duke Energy reporting 47,000 lingering outages and Indianapolis Power & Light with more than 14,000.

The NWS in Indianapolis said it planned to work with emergency managers on Thursday to determine the need for any storm surveys.

Storm damage also was reported in the central Indiana community of Whiteland, as well as elsewhere in the state.

In the Arkansas town of Harrisburg, about 105 miles northeast of Little Rock, more than 30 homes were damaged in Poinsett County and two people were injured.

Officials were working to confirm whether a tornado caused the damage.

The area hit by the storms is about 20 miles south of Jonesboro, which was struck last month by an EF3 tornado.