How ever did this team limp out of the Champions League so tamely? Barcelona were back to their brutal best on Saturday night in Madrid thumping five past Sevilla to win the Copa del Rey for the fourth season running.

Luis Suarez set the ball rolling. He always scores in finals. He has played in five for Barcelona and found the net in each of them. He was far from the only outstanding performer though.

There was plenty of help from Philippe Coutinho who wins his first medal after two losing finals for Liverpool, made the first, and scored the fifth.

From Lionel Messi who got the second goal in the 5-0 win and made two more. And from Andres Iniesta who was brilliant in what was almost definitely his last final for Barcelona before he leaves for China. He scored the fourth and ran the game. 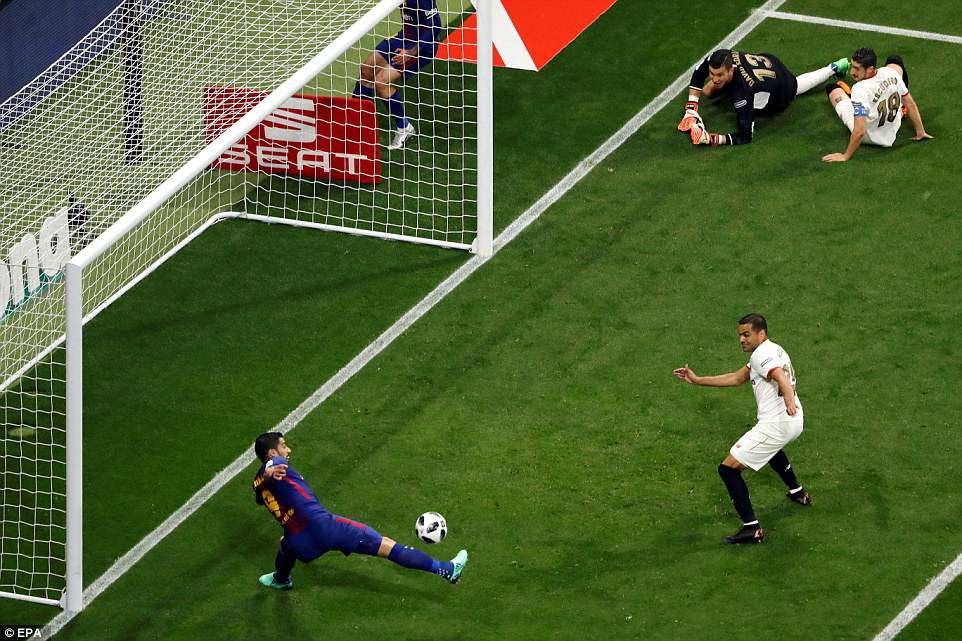 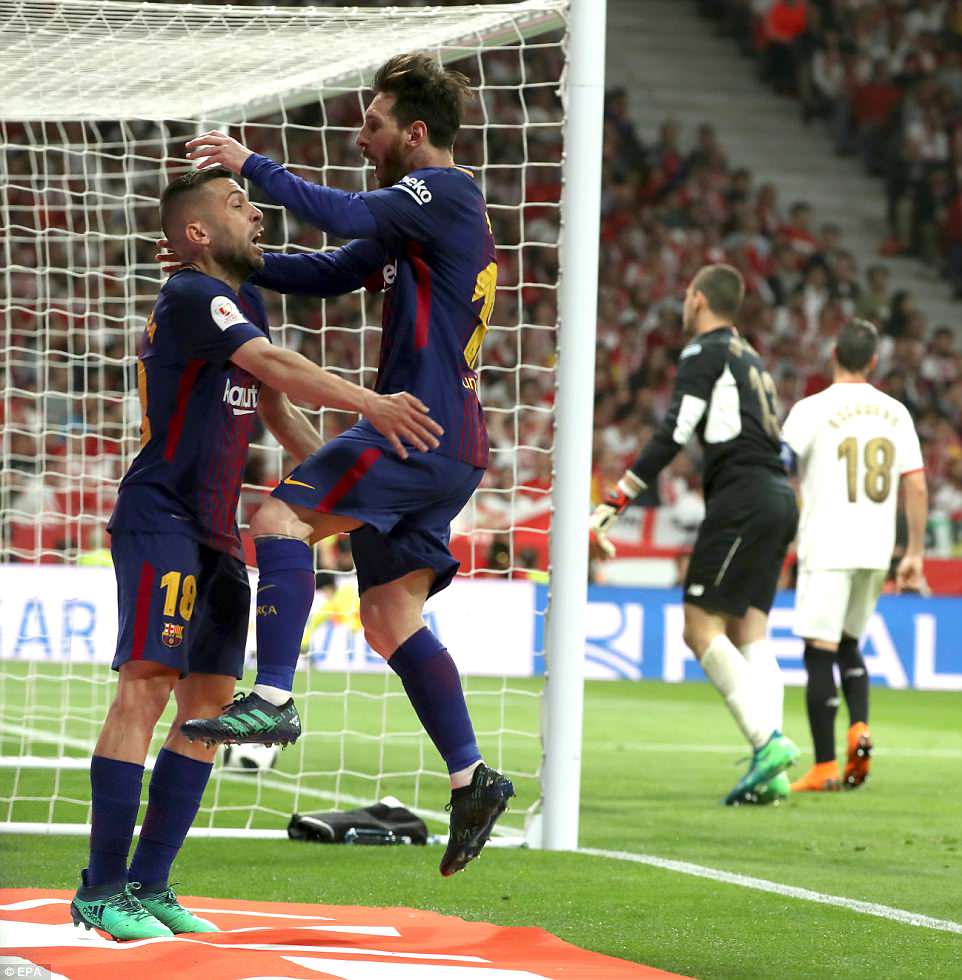 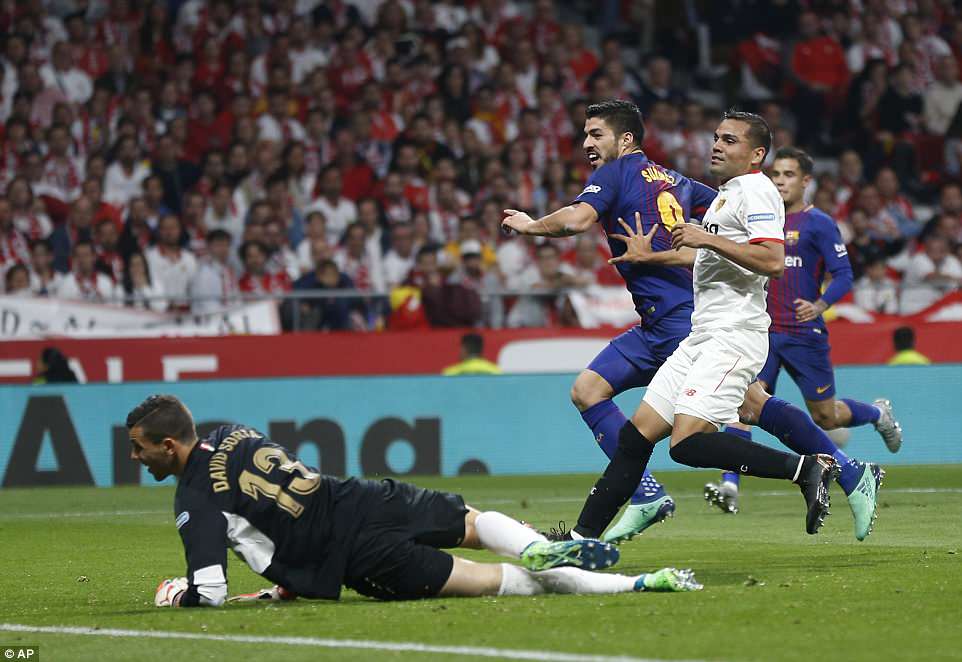 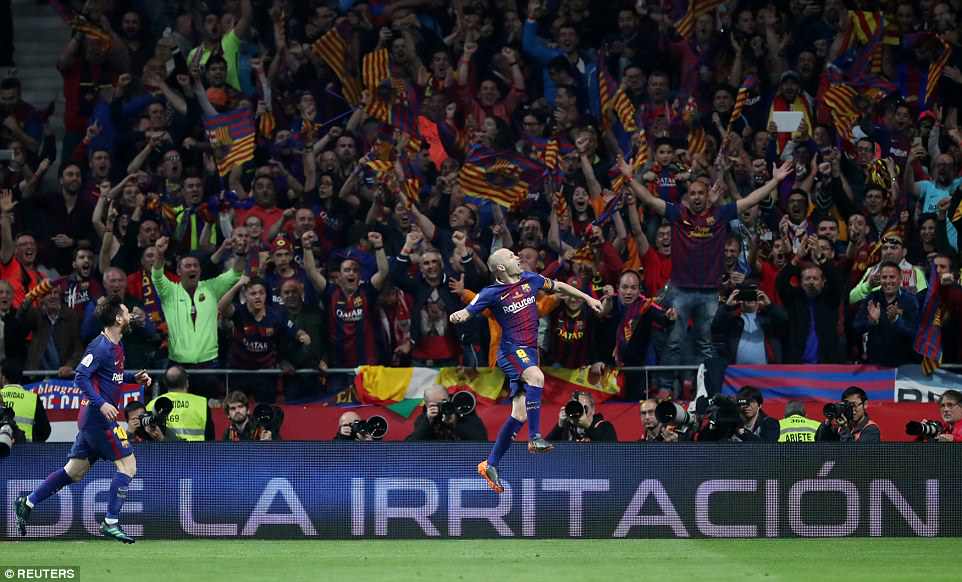 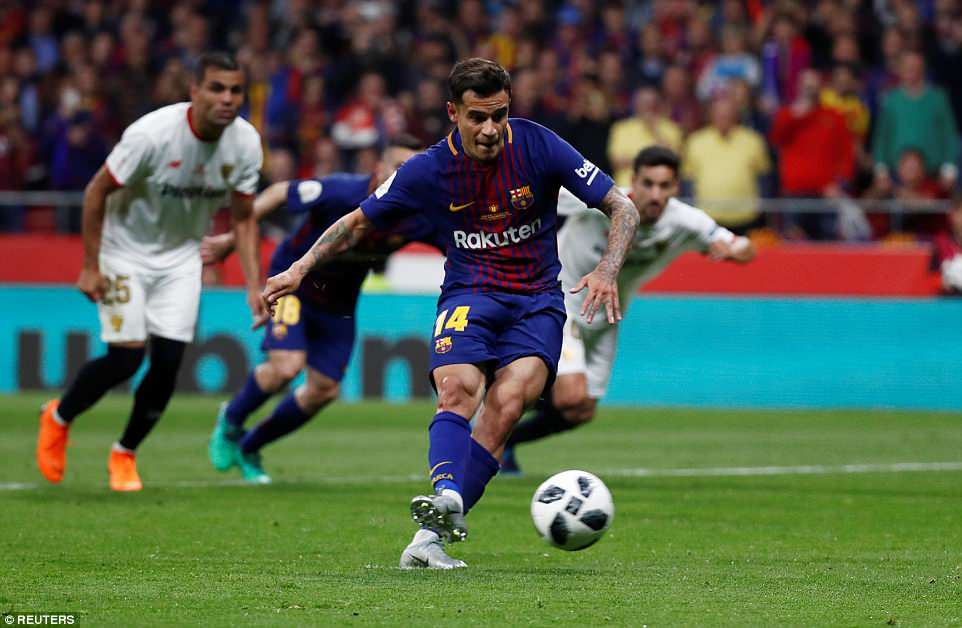 And all this came from Messi having started slowly giving the ball away with his first touch and running into trouble with his second. On eight minutes he gave a hint of what was to come when his free-kick was bound for the top corner but pushed away by David Soria.

Iniesta had made a terrific start and Coutinho was on the same wavelength but it was the goalkeeper who started the move for the first goal.

Jaspar Cillessen played the pass of his life from the edge of his own six-yard box to send Coutinho racing clear down the right. The former Liverpool midfielder pulled the ball back from the byline and although it was behind Suarez he was able to hook into the empty net.

Cillessen charged out of his goal to jump up and down in celebration with Jordi Alba and Samuel Umtiti. It was some assist. Route one can work for Barcelona too sometimes. There had been five touches – one for him, one for Suarez, and three for Coutinho.

Barça’s Cup keeper will be more in demand than ever now. There are plenty of teams that want to make him their number one. 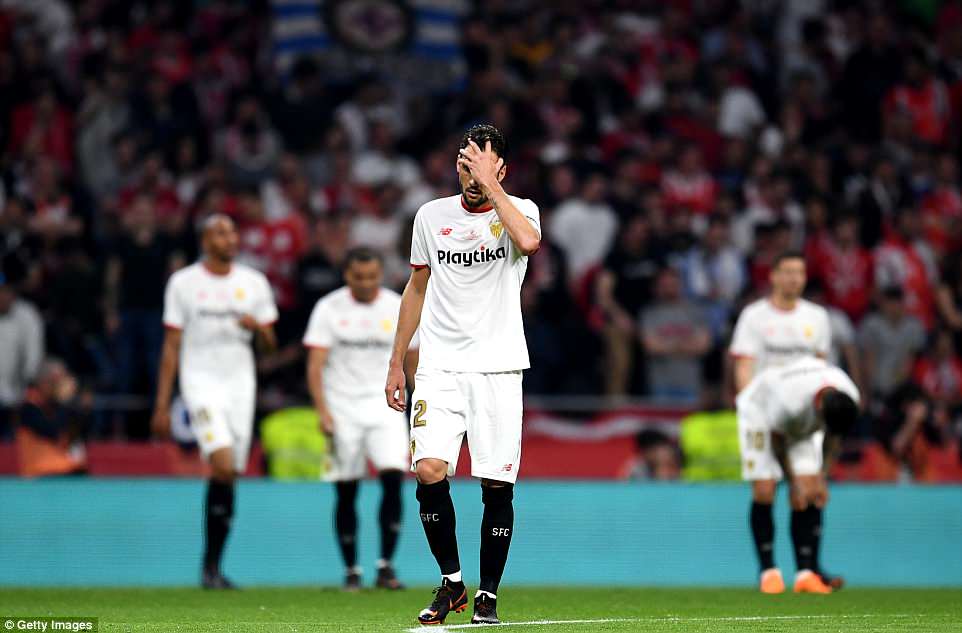 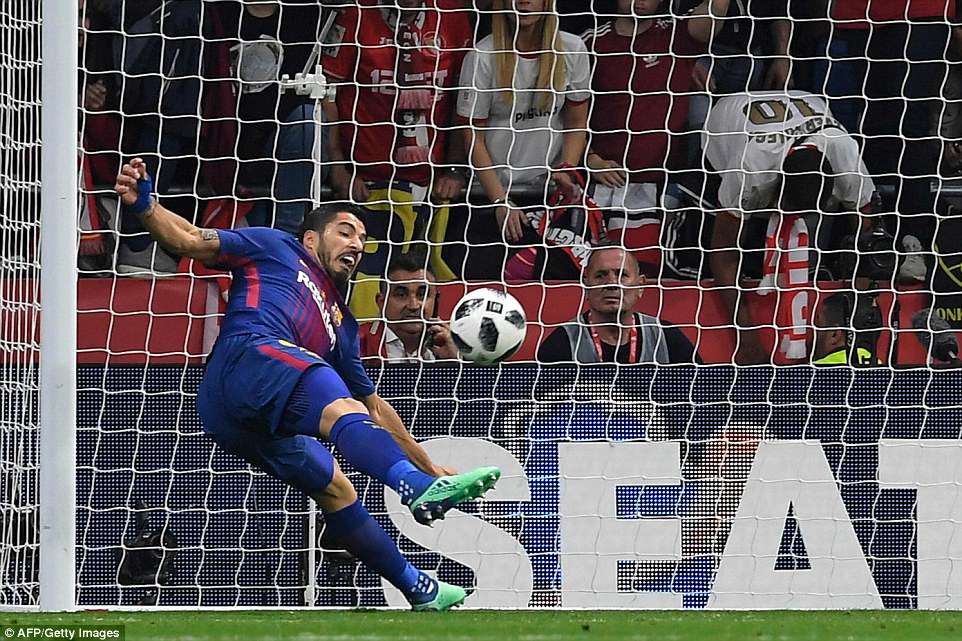 Coutinho latched onto Cillessen’s through ball before charging towards the byline and finding Suarez, who finished with ease 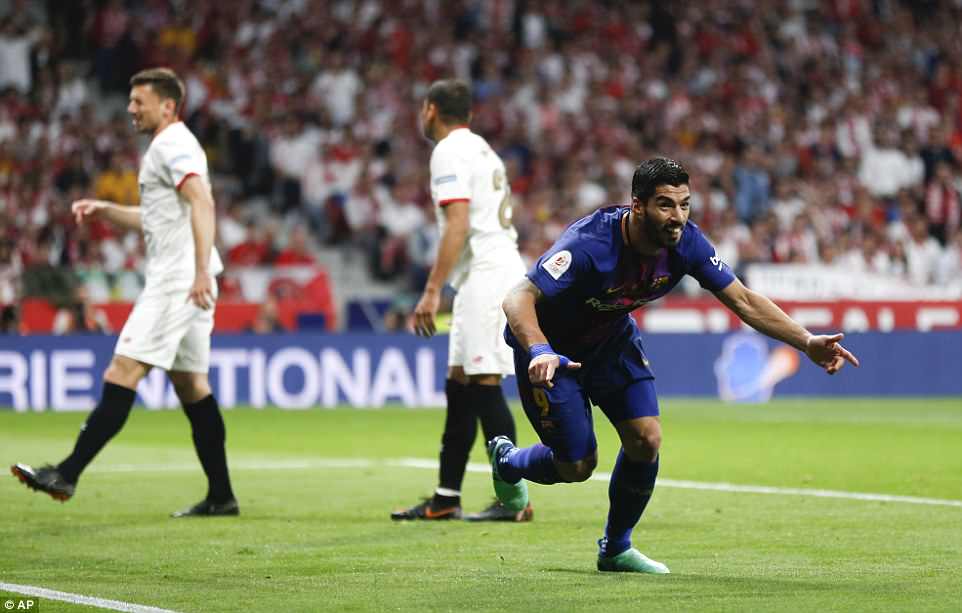 Joaquin Correa miskicked and Steven Nzonzi scuffed a Jesus Navas cross as Sevilla enjoyed a brief spell of pressure. Suarez then unnecessarily kicked out at Mercado and was lucky not to be booked. But that aside, they were in control.

An Iniesta shot hit the bar as Barcelona poured forward once more and the worst news for Sevilla was that Messi was going up through the gears. He predictably got the second.

If the first goal was direct football then the second one was straight from the Barcelona back catalogue.

Messi started the move playing in Iniesta. He fed Alba who returned the pass. Iniesta then sent Alba clear. It seemed he had over-run the ball but he recovered to brilliantly back heel it into Messi’s path and he scored. It was the fifth straight Copa del Rey final in which he had scored. 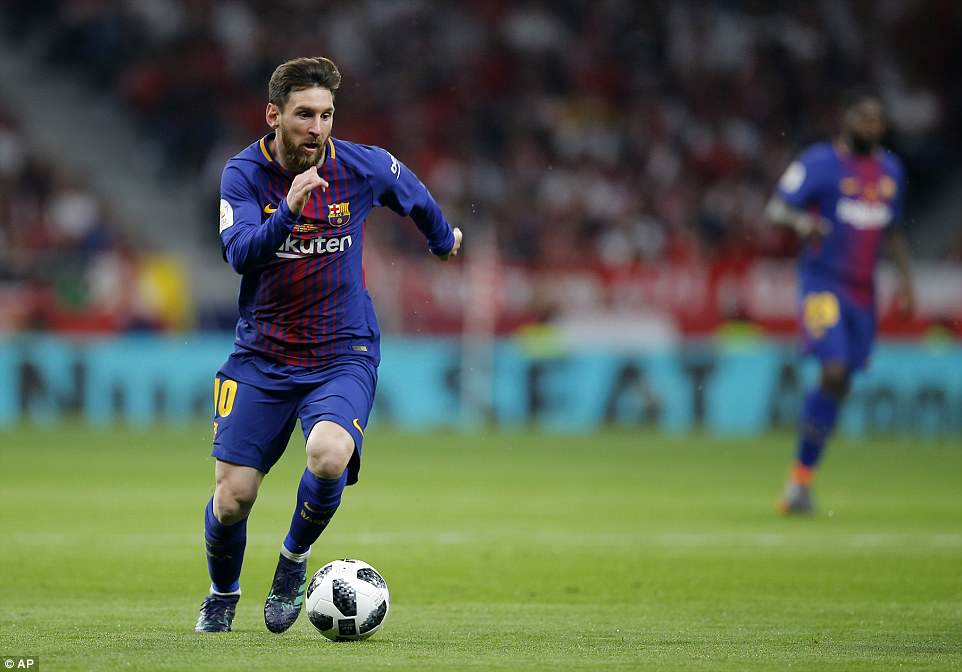 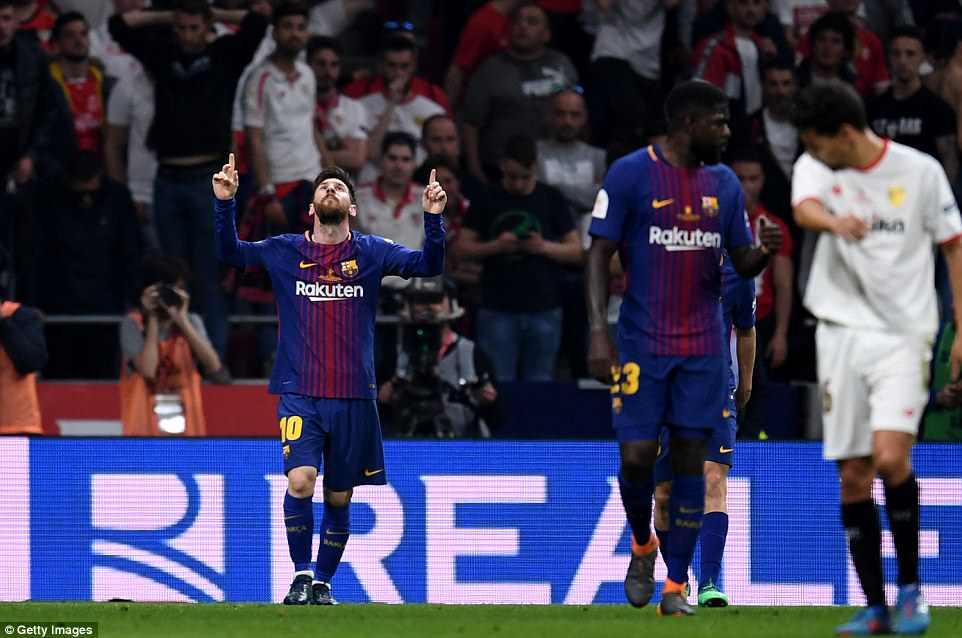 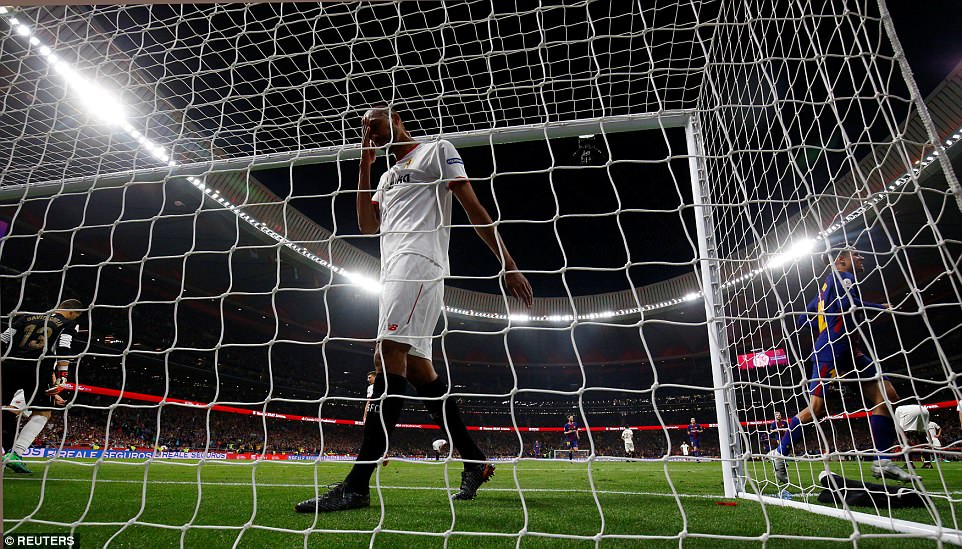 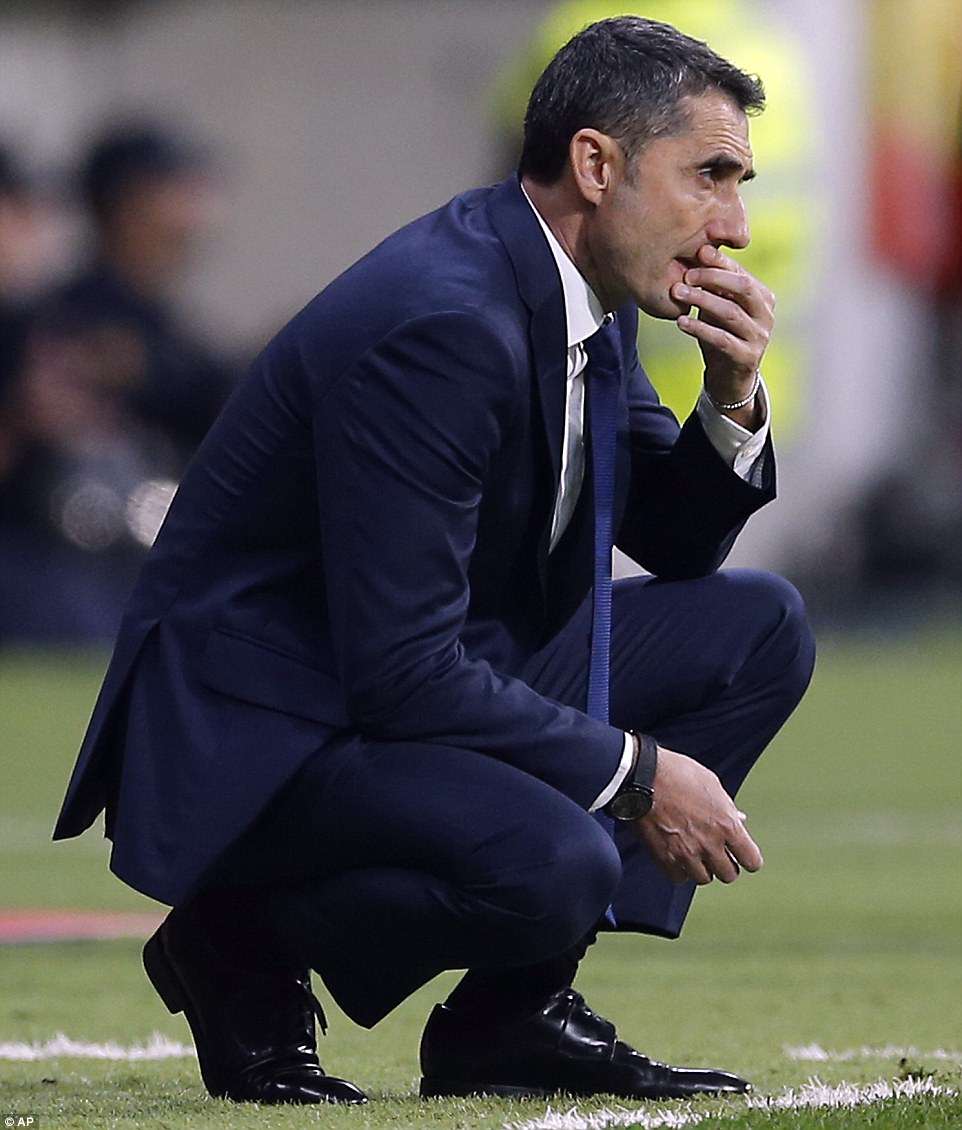 Messi then gave Sergio Escudero the slip and the defender grabbed his shirt and was booked. Messi was a long way from goal but he was clear without the foul and Sevilla held their breath before the colour of the card was revealed.

There was a third before the break. Suarez and Messi played one of their long one-two wall passes through the opposition’s defence and Suarez beat Soria.

As the Barcelona players walked off the pitch at half time they waved to family members in the crowd. This was too easy for them. It had been a brutal first half.

It didn’t get any easier in the second period for Sevilla and the man every neutral wanted to score hit the back of the net. 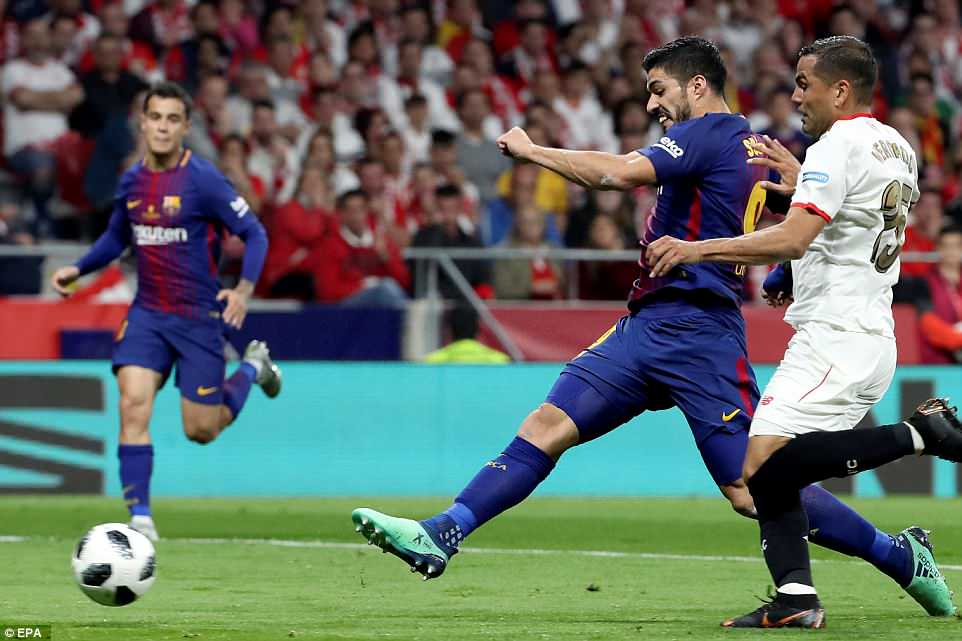 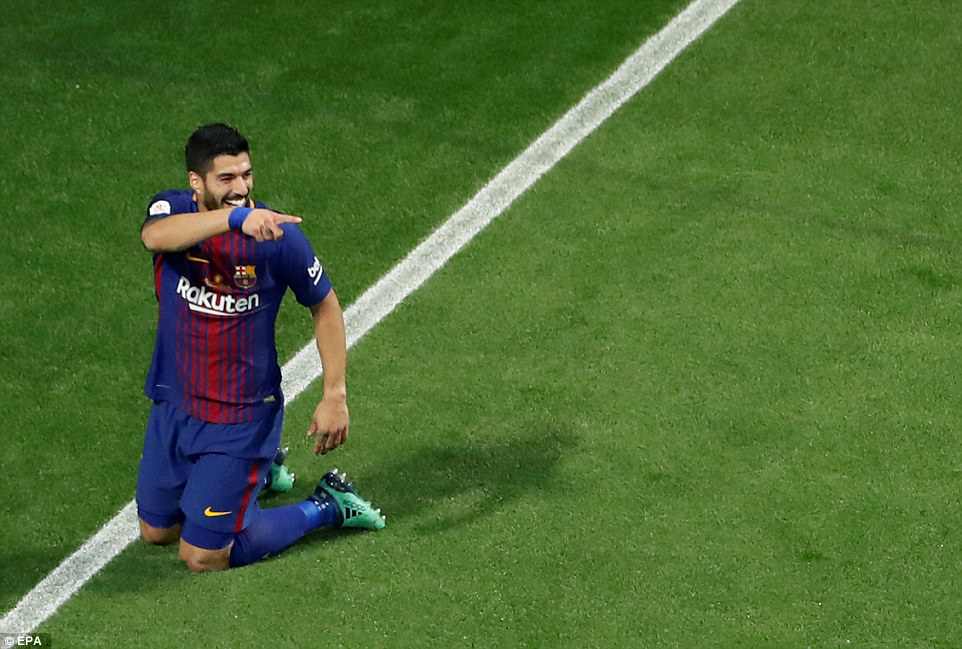 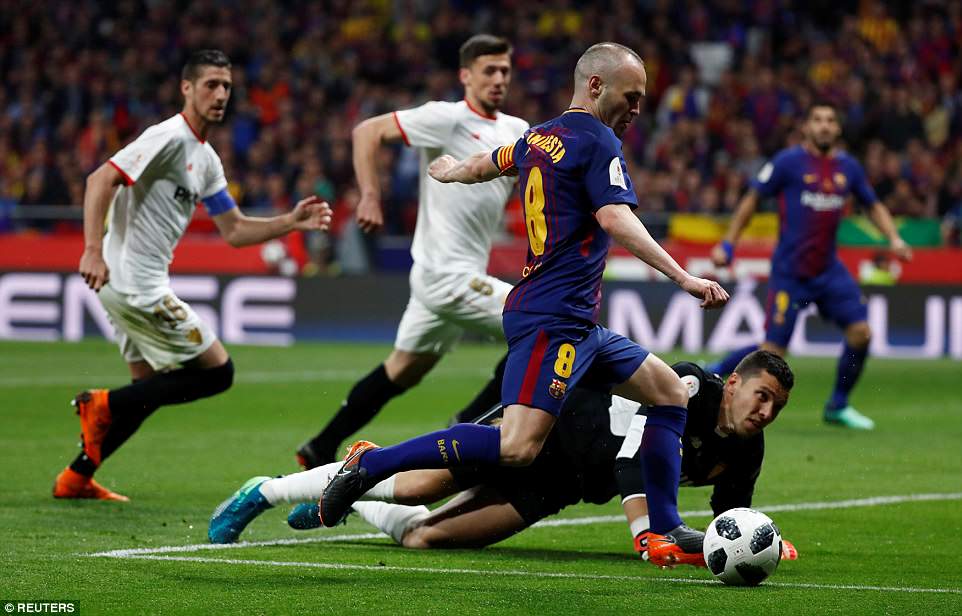 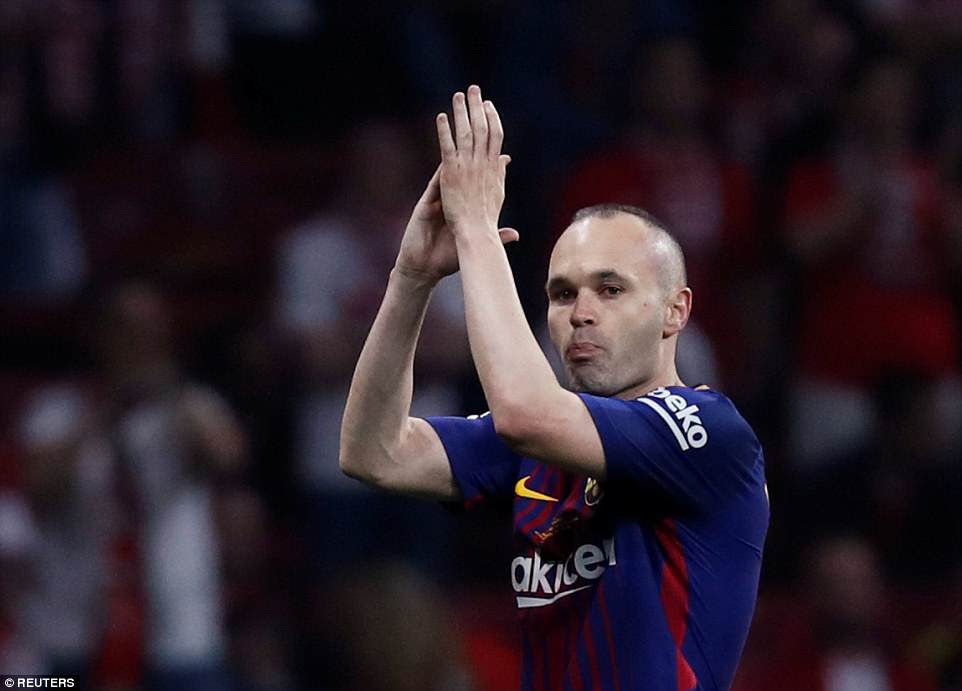 It was Messi’s pass that sent Iniesta clear, he dropped his shoulder to throw Soria, and then squeezed in the fourth from the tightest of angles.

Coutinho added a fifth but the referee had already pointed to the spot after Clement Lenglet had handled. Coutinho took the kick himself and scored to crown his best performance so far in a Barcelona shirt. He was taken off before the end to huge applause. That was topped by Iniesta’s ovation when he left three minutes from time. Barcelona and football in Europe will miss him.

The only question left hanging in the air as Barcelona celebrated was why they had been so poor against Roma. Sources close to the board claim the coach’s future would have been in doubt had he lost the final such is the feeling that he exhausted the players in the league and it showed in Europe.

Queen’s ‘I want it all’ boomed out on the stadium sound system at half time. Not so long ago Barcelona had dreamed of winning it all. They will have to make do with a league and cup double, and with this sensational way of winning the final. 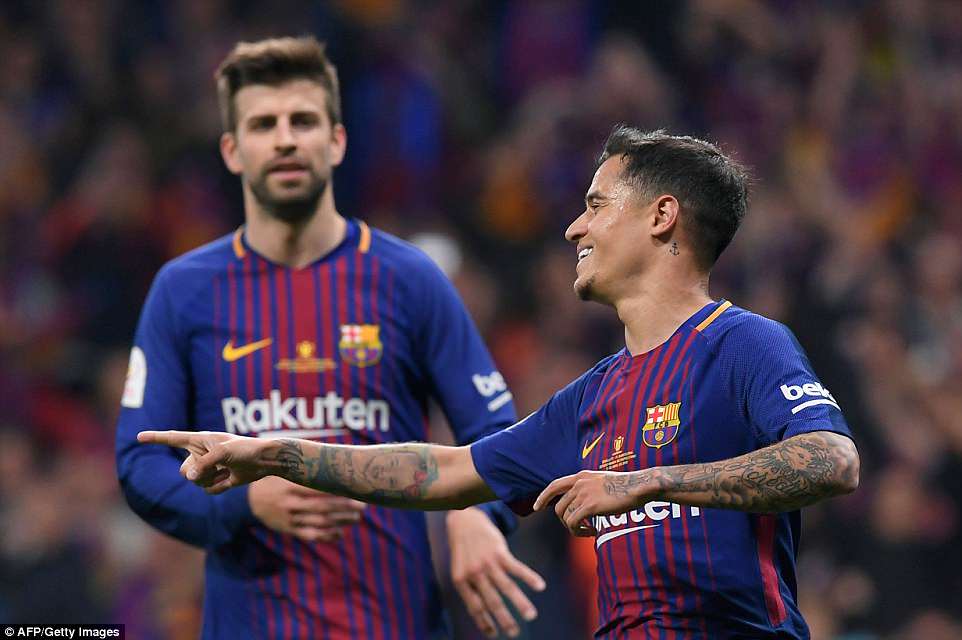 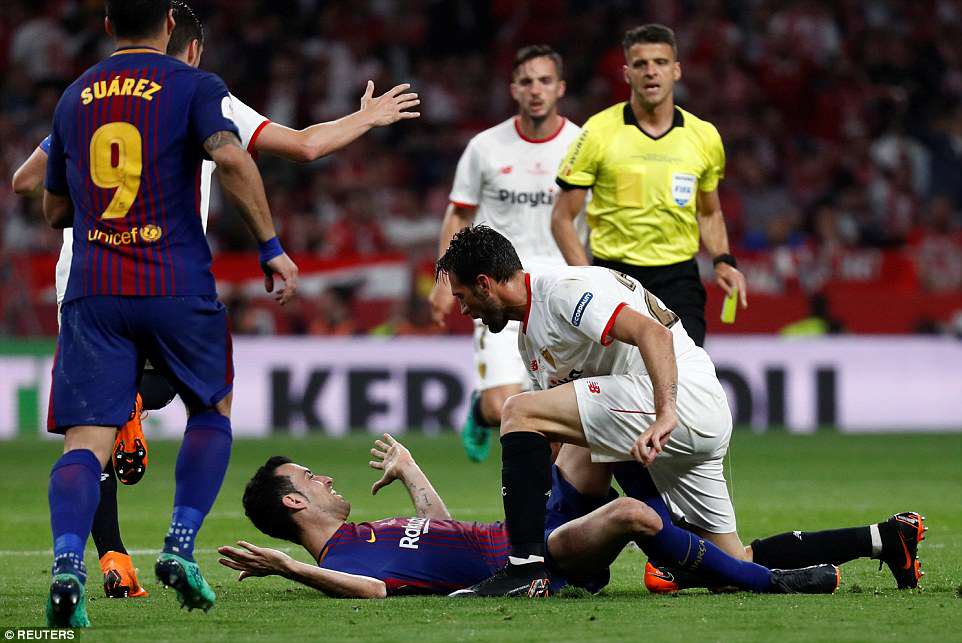 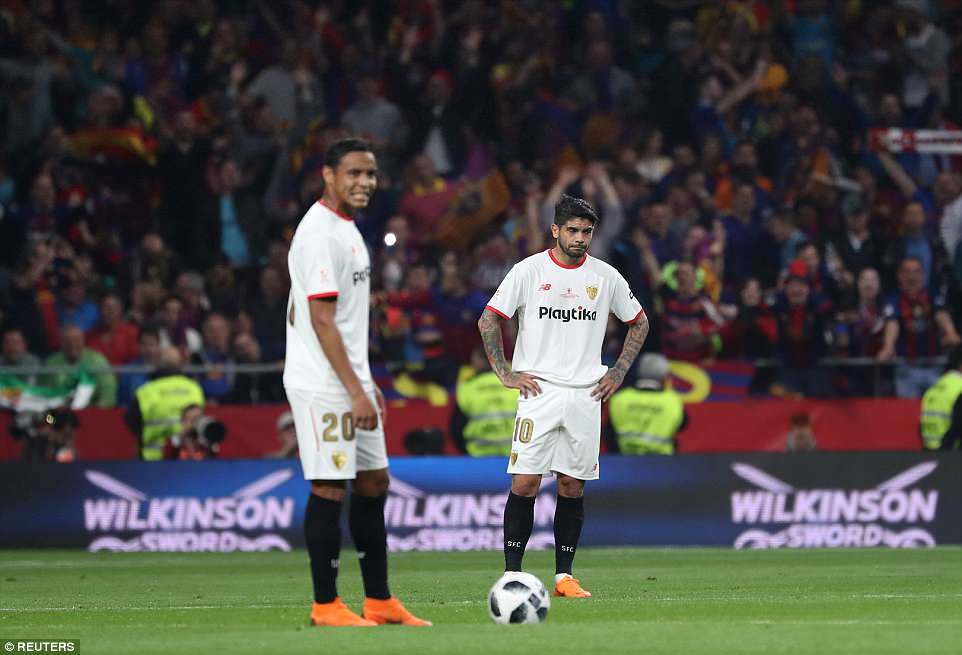