Nemanja Matic stormed down the tunnel, stony-faced, not stopping to offer a handshake. Two of Manchester United’s other unused substitutes, Andreas Pereira and Timothy Fosu-Mensah, hurled plastic bottles to the ground in anger and frustration.

Down on the pitch, Ole Gunnar Solskjaer gave Sevilla coach Julen Lopetegui the most cursory of congratulations, but the Spanish party was already in full flow.

The coaches and players who had spent the last minutes of the match hopping around on the touchline, haranguing the fourth official Daniel Siebert and exhorting German referee Felix Brych to blow his whistle were on the pitch and cavorting with their ecstatic teammates. 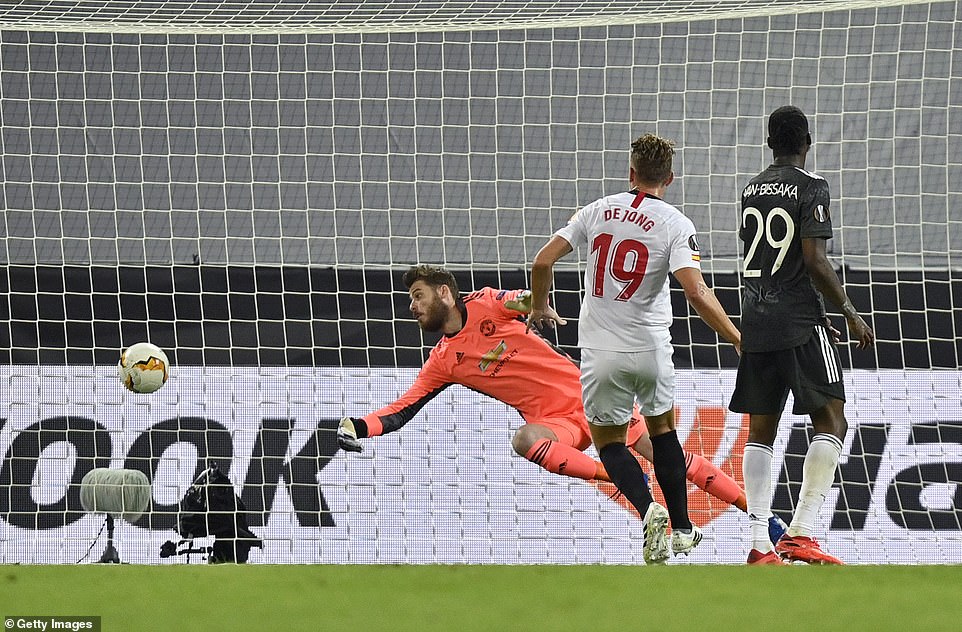 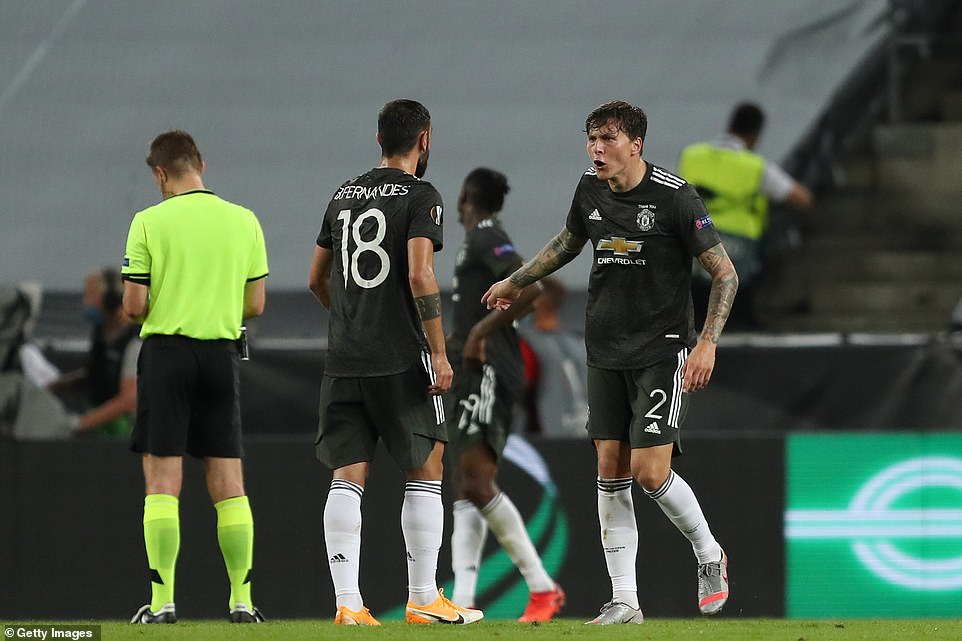 Up in the stands, a larger than usual contingent of Sevilla officials acting more like fans were joining in the celebration.

In an empty arena like the 50,000-capacity RheinEnergie Stadion, the absence of supporters only highlighted Sevilla’s joy – and United’s pain.

This hurt, make no mistake. A third semi-final defeat of the season. The first time since 1990 that United have gone three years without a trophy.

Losing to less-than-gracious opponents only made it worse. ‘The best team lost,’ said United captain Harry Maguire, showing his irritation. 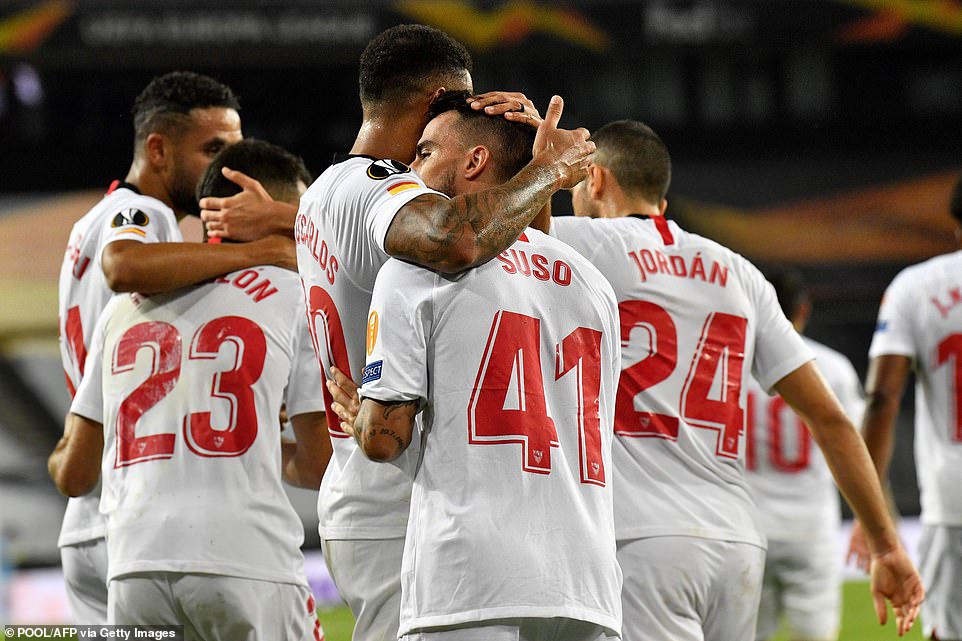 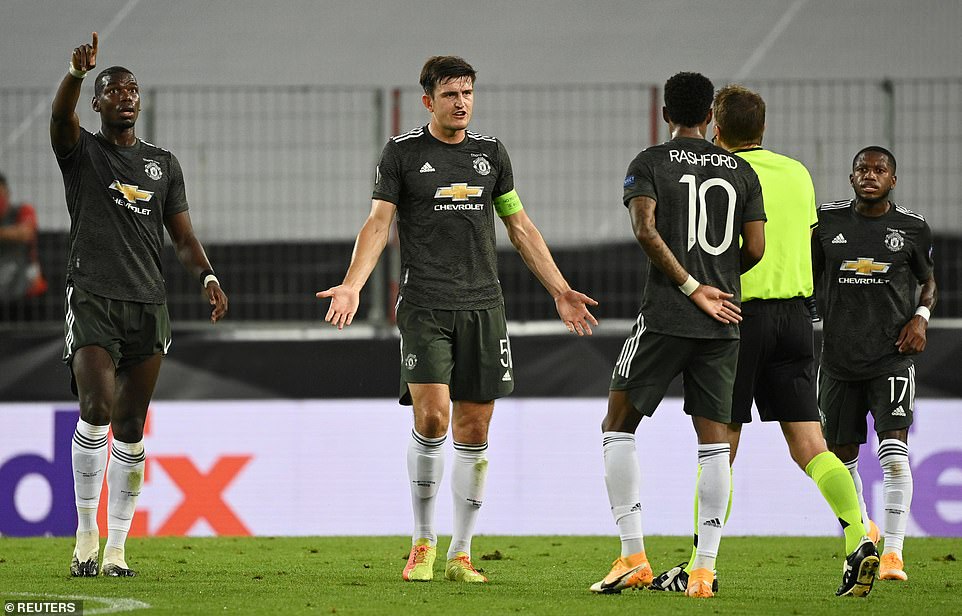 He was right. United were the better team, created the better chances and had twice as many shots on goal. They took an early lead through another Bruno Fernandes penalty but were pegged back.

As if to rub salt into their wounds, former Liverpool reject Suso scored the equaliser. Then ex-Manchester City man Jesus Navas set up a 78th minute winner for substitute Luuk de Jong, best known in English football for flopping on loan at Newcastle in 2014.

So United’s season is over after more than a year and 61 games, and so too is English football’s involvement in Europe.

Solskjaer’s side were the last ones standing but it’s the Europa League specialists from Seville – winners of this competition five times in the last 16 years – who go on to contest Friday’s final back here against either Inter Milan or Shakhtar Donetsk.

Instead, United will have the briefest of rests at the end of a marathon season that has ended just 28 days before most other Premier League clubs kick off the new campaign. 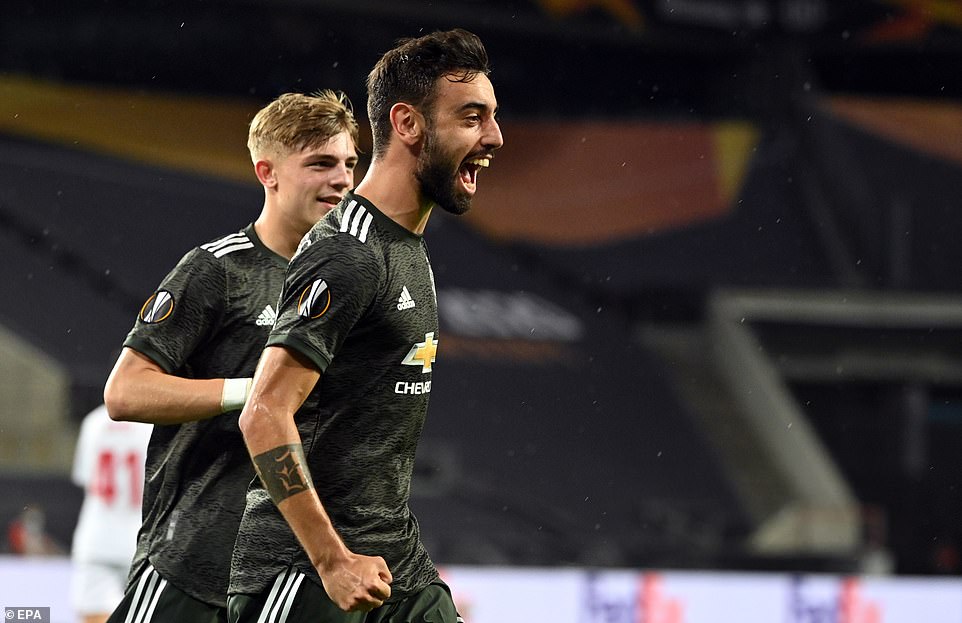 It had all started so positively as well. The game was only seven minutes only when Marcus Rashford played the ball into Anthony Martial who had his back to goal and cleverly dragged the ball 180 degrees into the path of his teammate.

Rashford should really have beaten goalkeeper Yassine Bounou who blocked his attempt at close-range, but Diego Carlos’s sliding tackle took out United’s No 10 after the ball had gone.

Brych pointed to the spot and Fernandes stepped up to score. Of course he did.

It’s four-and-a-half years since the Portuguese playmaker last missed one. This was his eighth in eight attempts since arriving at Old Trafford in January, following his decisive effort from the spot in last week’s quarter-final win over FC Copenhagen, and 14th for United and Sporting Lisbon this season. 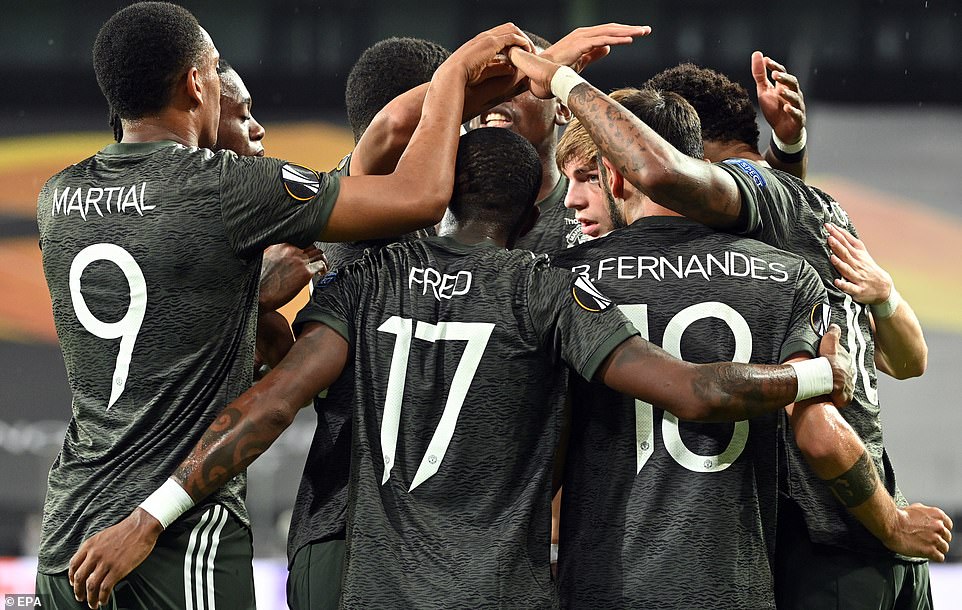 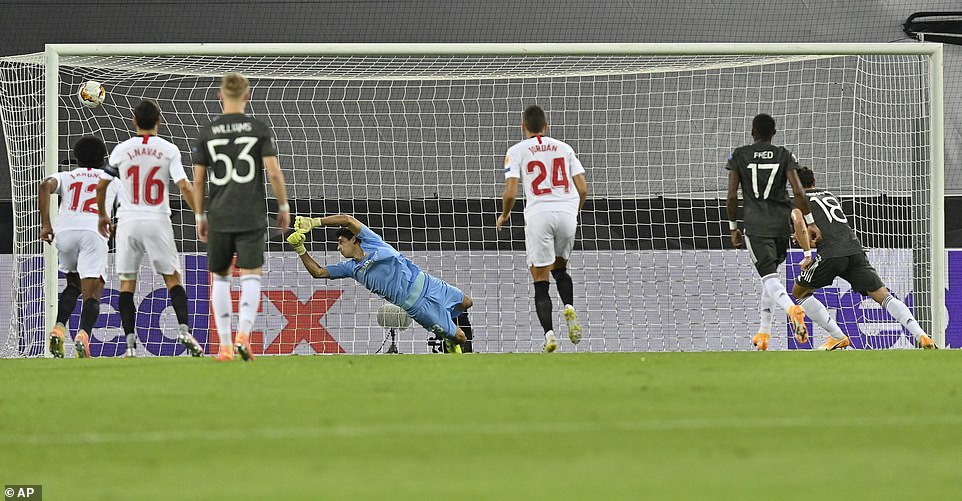 First came the usual stutter-step approach and this time a clinical finish lifted high into the top corner.

Solskjaer again turned to David de Gea at this stage of the competition – just as he had in the semis of the FA Cup and Carabao Cup – even though Sergio Romero had played in nine of the previous 11 ties, but the Spaniard was beaten when United switched off in the 23rd minute.

Aaron Wan-Bissaka was at fault for losing track of Sergio Reguilon who broke forward from his own half and raced onto a pass from Lucas Ocampos, Sevilla’s match-winner against Wolves in the quarters.

Reguilon spotted Suso unmarked at the far post and crossed beyond Maguire and Brandon Williams to the former Liverpool man who swept the ball inside De Gea’s near post. 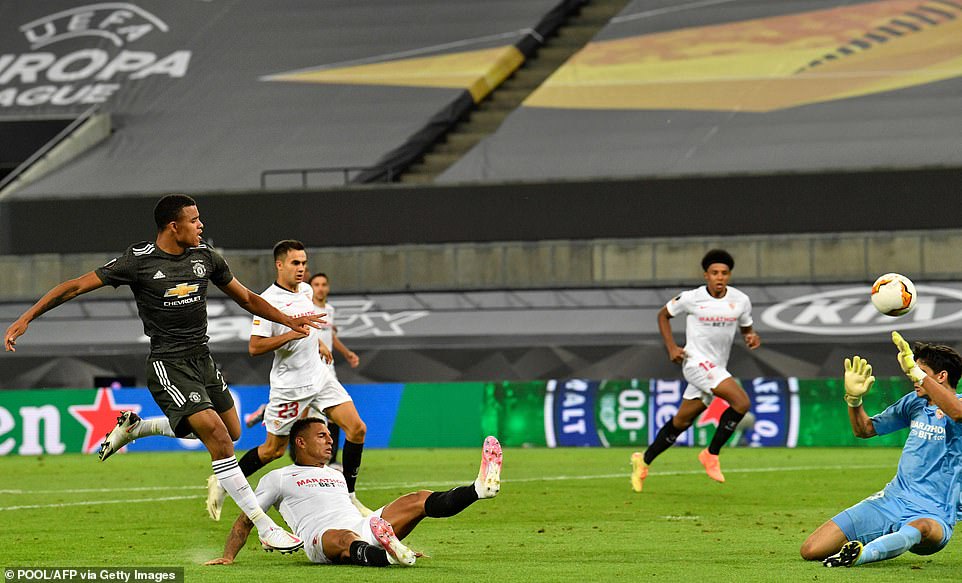 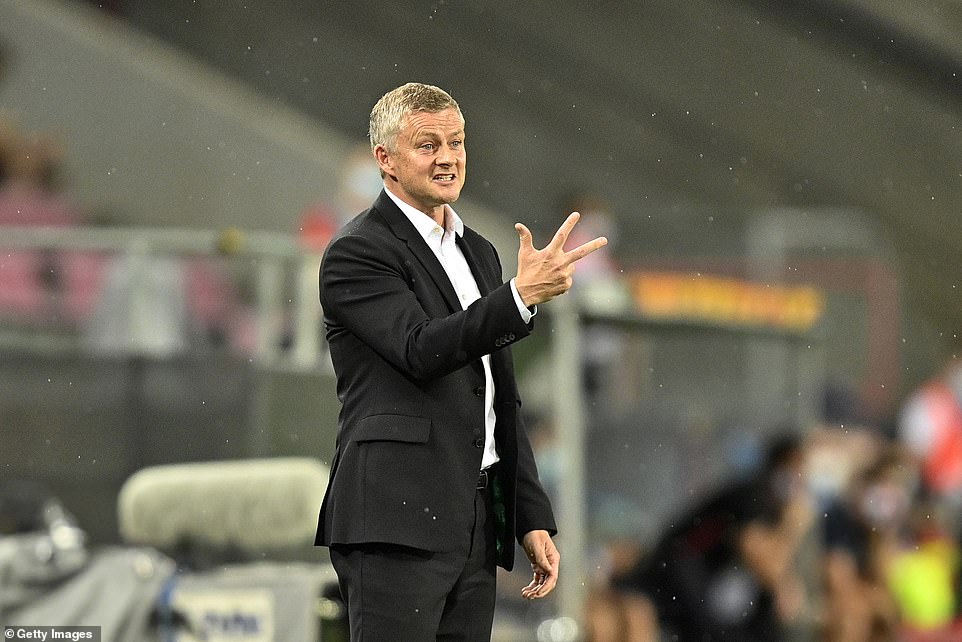 United were unhappy that a throw-in was awarded against them at the start of the move – and with some justification after replays showed that the ball brushed Jules Kounde’s hair before going out – but that was no excuse for the loss of concentration.

Martial and Rashford went close at the end of the first half and start of the second. Bounou denied a subdued Mason Greenwood, saving with his legs.

All the while, tempers continued to fray. Solskjaer told Lopetegui to back off when the Sevilla coach urged the referee to take stronger action for Maguire’s challenge on Youssef En-Nesyri. It was a surprise that only two Sevilla players went into the book and three from United.

After the Spanish contingent in the stands went wild again, calling on VAR to check if Fernandes had handballed Joan Jordan’s free kick, the United substitutes angrily shouted at them to sit down. 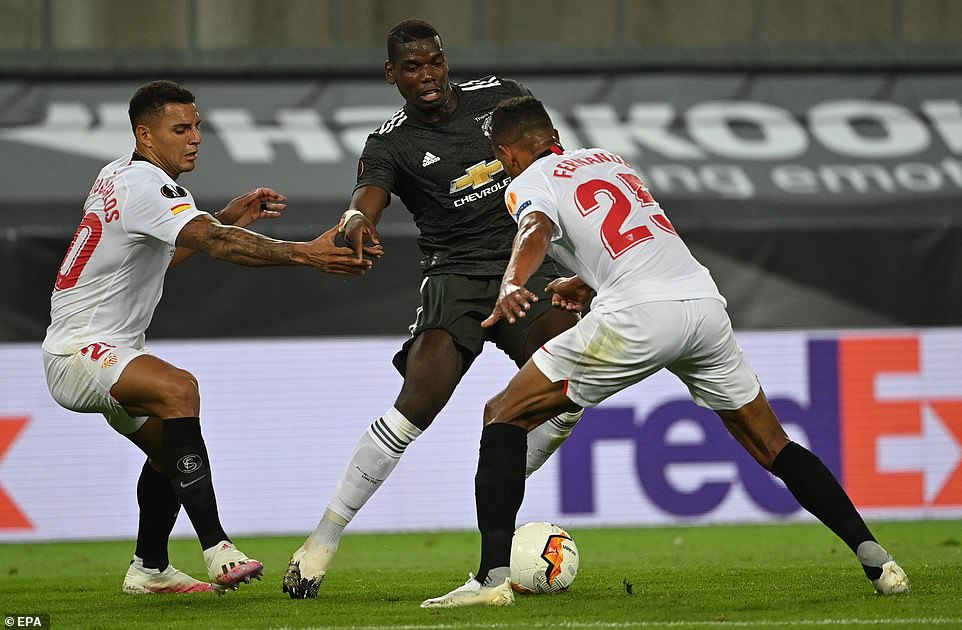 But when De Jong scored the decisive goal 12 minutes from the end, it was Solskjaer’s players were arguing among themselves as Fernandes and Victor Lindelof bickered in Portuguese.

Williams failed to close down Sevilla skipper Navas who crossed from the right. United’s centre-backs were caught flat-footed and De Jong turned the ball past De Gea from close range.

The Dutchman couldn’t score in his 12 appearances for Newcastle but he never looked like missing this one.

So delight for Sevilla and despair for United who came up short again. A third-place finish in the Premier League means they will upgrade to the Champions League next season, but this was an opportunity spurned.

Solskjaer knows the importance of trophies – and the longest of seasons has now ended without one. 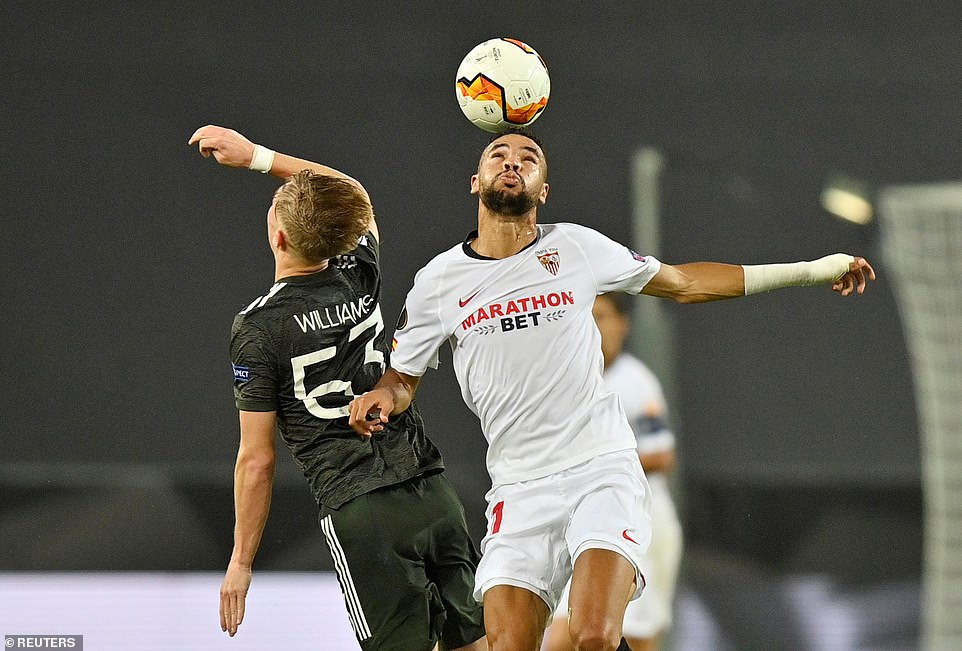 Brandon Williams, who was booked for a clumsy tackle of his own, challenged Youssef En-Nesyri during the pulsating first half 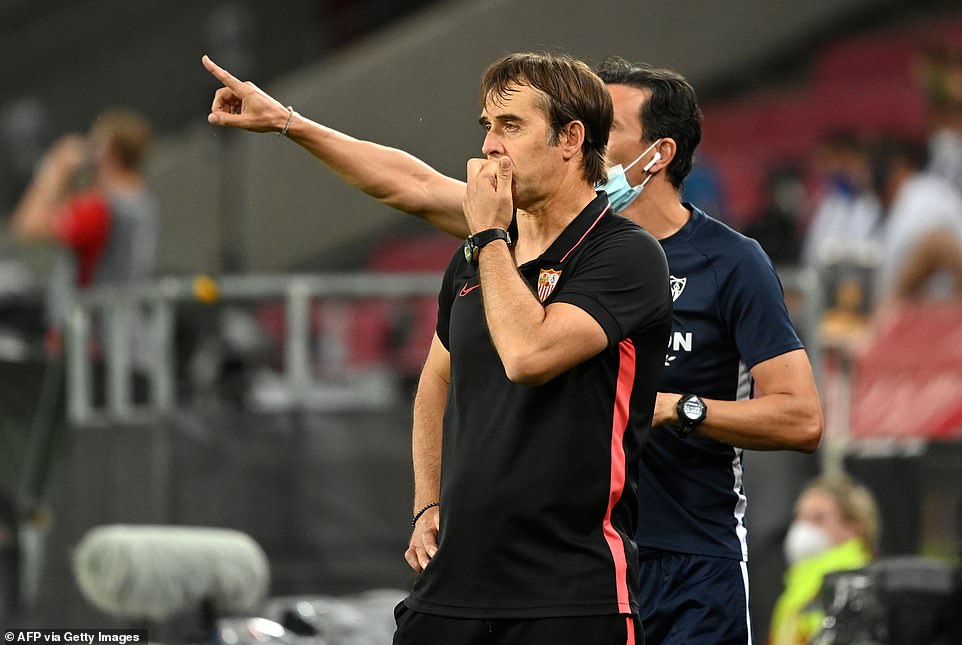