A woman who was left disabled after a violent sex attack has had her lifelong benefits stopped.

The 53-year-old, known as Susan, was granted a lifetime award of disability benefits after being left with little bladder or bowel control from the brutal assault.

But following a reassessment under controversial new criteria, her payments were stopped.

And Susan – who still suffers night terrors after the sexual assault – says the system is not fit for purpose and needs to be reviewed.

The woman has since fought to have her benefits restored – and her plight was brought up in the House of Commons by her local MP.

Canterbury MP Rosie Duffield brought her the woman’s case to the attention of Parliament and urged the Department for Work and Pensions to look into the case.

Susan said: ‘I just think it’s absolutely disgusting that when you are awarded a lifetime award of disability benefit that counts for less.

‘Lifetime means lifetime. My condition has a major effect on my life on a daily basis.

‘In many ways it’s a hidden disability, but it can have such a devastating effect on people’s lives.

‘I just don’t understand how something so complex can be so overlooked.’

Susan received £250 a month in Disability Living Allowance until 2016, when she was reassessed under the new Personal Independence Payments (PIP) scheme.

She has been forced to leave jobs because she was embarrassed by the effects of her condition and says she feels let down by the government.

She said: ‘It’s not there to support people who actually need it.’ 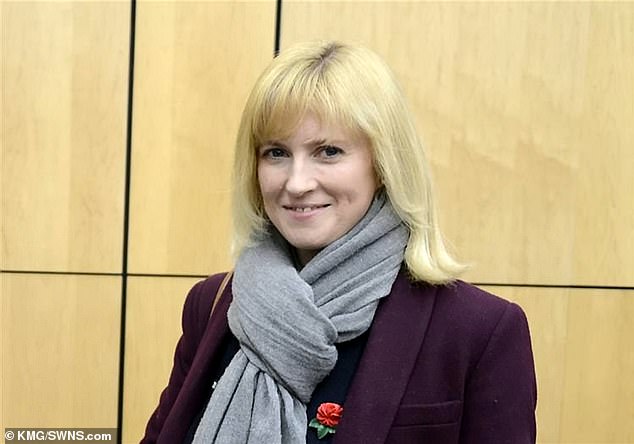 It was ruled she did not meet the new criteria and her payments – used largely to cover the costs of a car – were stopped, forcing her to apply for mandatory reconsideration.

This was rejected, along with her bid to overturn the decision at a tribunal in October 2017.

Assessors say that her bladder control is sufficient enough to not score the higher rating.

She said: ‘When I was originally told I no longer qualified I couldn’t believe it – I thought it had to be a mistake.

‘When you get to the tribunal and they say “I understand your situation but the Pip criteria won’t let me score you any higher”, then to me there’s something wrong with the scoring system.

‘The judge at the tribunal said that he didn’t doubt at all what I was telling him, but the Pip system would not allow him to allocate the points I needed.

‘Why does incontinence count for less under PIP than it did under DLA?’

The ‘planning a journey’ section focuses mainly on someone’s cognitive ability to plan, but Susan says for the ‘moving around’ system rating, assessors ‘look purely at your ability to be able to walk.’

She added: ‘It doesn’t address the fact I can’t follow a journey if there’s a chance I’ll have an accident, whether it be on the train, or if I use a bus, or if I go to the shops.

‘I don’t have any warning before having an accident – it just happens.

‘It can be incredibly embarrassing and stops me wanting to go out or socialise.

‘I have to take a change of clothing with me and fresh pads, and put plastic bags on my car seats.

‘Sometimes I’ve had to evacuate at the side of the road on the motorway.

Susan is hoping her MP’s intervention will bolster her case.

Theresa May responded by saying she could not comment on individual applications, but told Ms Duffield: ‘I will ensure that the Department for Work and Pensions and the relevant minister looks at that case and responds to the Honorable Lady.’

Susan is now waiting for a date for a second tribunal, but has been told there is a year-long waiting list.

The Department for Work and Pensions claims PIP is a ‘better’ benefit which takes a ‘much wider look at the way a person’s health condition or disability impacts them on a daily basis’.

A DWP spokesman said: ‘We’re committed to ensuring that disabled people get the full support that they need.

‘Decisions are made following consideration of all the information provided by the claimant, including supporting evidence from their GP or medical specialist.

‘People who are unhappy with the decision about their PIP claim can appeal to an independent tribunal.’