NRL star Jack de Belin will be allowed to play again after the sexual assault charges against him were dropped following two court trials.

The St George Illawarra forward, 30, and co-accused Callan Sinclair, 24, were facing the prospect of another trial later this year after trials in Sydney and Wollongong resulted in hung juries.

Ahead of a case mention on Friday, the Office of the Director of Public Prosecution advised lawyers for the accused men that the charges will be withdrawn.

Sexual assault charges against Jack de Belin will be dropped, it was revealed on Thursday. He is pictured leaving court on May 10

The woman alleged she was attacked by de Belin and then cried as the men took turns.

One of de Belin’s charges – aggravated sexual assault in company – carried a maximum term of life in prison.

De Belin has not played for St George Illawarra since before he was charged in December 2018, as part of the NRL’s no-fault stand-down policy.

He will be able to recommence his football playing career, once he receives final approval from the NRL.

De Belin’s last game for the Dragons was in September 2018.

He signed a new four-year deal with Dragons at the end of 2020 when his previous contract expired, after also fielding interest from the Warriors.

Part of the terms of the upgraded contact mean while de Belin is unavailable to play the big-money component is not activated, and he is instead being paid about $1000 per week. 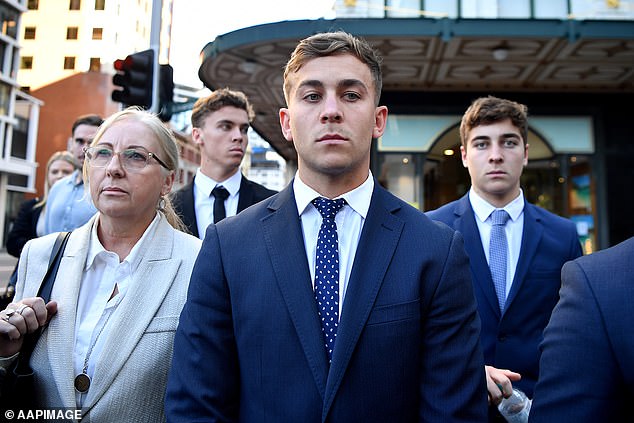 De Belin, 30, and co-accused Callan Sinclair (pictured), 24, were facing the prospect of another trial later this year after trials in Sydney and Wollongong resulted in hung juries