Sexual assault leaves victims with double the risk of hypertension

Sexual assault survivors have much higher risks of developing life-long health issues like hypertension, insomnia and depression than others, according to a new study.

The research, published today in the Journal of the American Medical Association, is one of the first to assess the ramifications of assault in a clinical setting.

Many previous studies have shown survivors suffer in the wake of their ordeals, but until now those reports have relied on self-reported data.

The new study by Pitt School of Medicine looked at 300 women, who had initially been recruited for a study on heart health, and found those who’d been sexually assaulted were twice as likely to have insomnia and hypertension, and three times as likely to suffer major depression.

The report comes as senators grapple with sexual assault allegations against Supreme Court-nominee Brett Kavanaugh, whose first accuser, Stanford psychology professor Dr Christine Blasey Ford, says she has suffered PTSD ever since the day he allegedly pinned her on a bed, covered her mouth, and tried to rip her clothes off.

‘When it comes to sexual harassment or sexual assault, our study shows that lived experiences may have a serious impact on women’s health, both mental and physical,’ lead author Dr Rebecca Thurston, a professor of psychiatry, psychology, and epidemiology, said.

‘This is an issue that needs to be tackled with urgency, not just in terms of treatment but in terms of prevention.’

The study has some caveats: the cohort was small, and most of the women involved were white.

But it has been hailed as one of the most significant steps to concretely measure how those who feel violated can suffer physiological side effects for years after.

Last week, a debate erupted over the science of how sexual assault could impact a person’s health after Dr Christine Blasey Ford spoke to the congressional committee about her PTSD.

Dr Ford, a psychology professor at Stanford University, spoke in detail about brain chemistry as she described how she feels impacted by the alleged assault.

‘The [cause] of anxiety and PTSD is multifactorial,’ Dr Ford said.

‘[The incident] was certainly a critical risk factor. That would be a predictor of the [conditions] that I now have.’

Today’s study appears to add weight to that theory.

Sexual harassment victims were more likely to be college educated, and yet have greater financial strain.

Looking specifically at sexual harassment (as opposed to sexual assault), they found victims had a higher risk of higher blood pressure and greater likelihood of hypertension, greater triglycerides, and clinically poorer sleep quality.

Sexual assault was associated with levels of depressive symptoms, anxiety, and sleep quality in the ranges consistent with clinical disorders.

‘It is widely understood that sexual harassment and assault can impact women’s lives and how they function, but this study also evaluates the implications of these experiences for women’s health,’ Dr Thurston said. 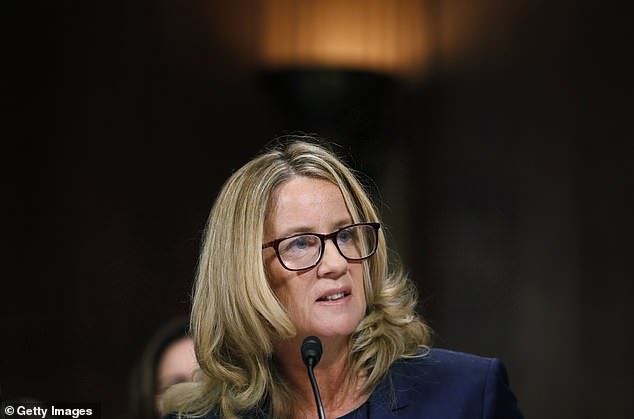 Last week, a debate erupted over the science of how sexual assault could impact a person’s health after Dr Christine Blasey Ford, a psychology professor at Stanford University, told the congressional committee that sexual assault alters the brain chemistry of survivors

The study is being presented today at the annual conference of the North American Menopause Society (NAMS) in San Diego, which analyzes risk factors for women’s health.

Dr JoAnn Pinkerton, an OB/GYN and chair of NAMS, said the findings show doctors should be aware that experiences years earlier in a woman’s life could be linked to chronic health issues now.

‘Victims of sexual harassment often experience emotional and physical symptoms for many years. Sometimes during menopause, those issues come to the surface with all the changes in hormones and stress of often taking care of aging loved ones or teenagers still at home,’ Dr Pinkerton told DailyMail.com.

‘Sexual assault and sexual harassment are risk factors for women health. Clinicians need to ask about them and to recognize that past traumatic events affect health as women age.

‘Both sexual harassment and assault, which may occur in as many as one out of five women, has been understudied for its effects on health. We need societal help to get women to bring their past events to their doctors as they are risk factors for both heart and mental health.’

‘This particular study is limited by small numbers, and a lack of diversity that limits generalizability about frequency and health risks. Based on other information, these health risks are likely to be greater in more racially diverse and economically stressed women.’