Shanghai on the up! This shiny city will leave you buzzing

‘It feels open to the world.’

Professor Joanna Waley-Cohen, Provost of NYU Shanghai, thinks it has something to do with the sheer size of the place (population 25 million) and partly the infrastructure – ‘subway system, ubiquitous wifi, even on the subway, well before New York got it’.

Lofty skyline: Shanghai has more high-rise buildings than any other city except Chicago

I get her point. After a couple of days, I start thinking how, if I were in my early 20s, I’d love to live here for a few months. It feels busy rather than crowded.

People hail from around the world, some working at Shanghai-based multi-national companies, their children attending the growing number of international schools, creating in turn a demand for young teachers who want exciting restaurants, bars and nightclubs.

New hotels are opening on the fashionable waterside street known as the Bund, including the Peace Hotel, and the magnificent Waldorf Astoria, formerly a private British gentlemen’s club. 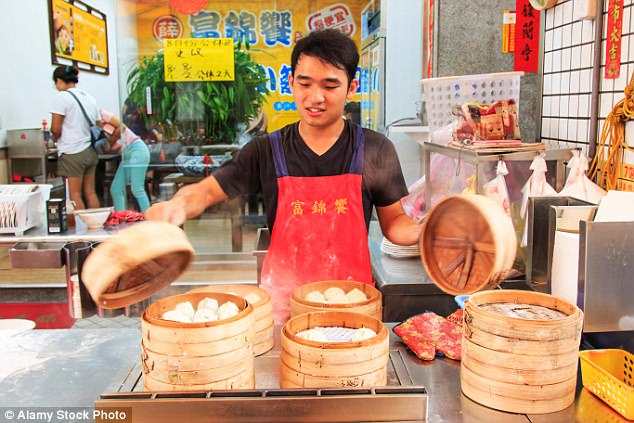 Food for all tastebuds: In Shanghai Times Square – which Anne says is as busy on a Friday night as Oxford Street on Christmas Eve – the street stalls offer traditional noodles and dumplings

It’s my third visit to Shanghai and this time there’s a sense of being immersed in a determinedly 21st century city.

In fierce competition with Hong Kong and Beijing, Shanghai has more high-rise buildings than any other city in the world except Chicago. The shiny towers proclaim a dedication to global commerce that is echoed by the frenzied shoppers. What on earth would Chairman Mao make of it?

In Shanghai Times Square, as busy on a Friday night as Oxford Street on Christmas Eve, I am struck by the race to westernise, to build giant designer shops such as Ferragamo, Gucci and Hermes alongside the street stalls offering traditional noodles and dumplings.

Shanghai was once known as the Paris of the Orient, which explains why I’m here to talk at the Shanghai International Literary Festival about how Parisian women survived in wartime France.

DEALS OF THE WEEK

Seven nights half-board at the five-star Blue Palace, a Luxury Collection Resort & Spa, from £1,085 pp, based on two sharing, with Sovereign (sovereign.com, 01293 765 003). Includes flights from Gatwick, airport security fast-passes and private transfers. Based on departure on May 9, 2017.

Lap up lemon groves and pretty harbours in Limone beneath the cliffs of the north-western shore of Lake Garda. Seven nights half-board at the Hotel Europa from £399 pp with Inghams (inghams.co.uk/lakes-mountains-holidays, 01483 791 116), including flights to Verona and airport transfers. The package is valid for travel departing on May 20, 2017.

Grab up to half-price savings on five-night breaks to Ajman Saray, a Luxury Collection Resort in the United Arab Emirates. Book by April 30 with Destinology (destinology.co.uk, 01204 824140) for travel between May 27 and June 24, 2017. An hour’s drive from Dubai, the resort has a private beach, restaurants and spa. From £549 pp B&B, based on two sharing and including Royal Brunei flights to Dubai and private transfers.

Tropical Sky (tropicalsky.co.uk; 01342 886941) has savings of up to 30 pc off seven nights B&B at the Khaolak Merlin Resort in Thailand. From £789 pp, based on two sharing, including return flights from London and transfers. Valid between May 1 and June 30 when you book by April 30.

The festival was started by Michelle Garnaut, an enterprising Australian restaurateur, whose glamorous rooftop restaurant, M On The Bund, has a dazzling terrace view of Pudong, a booming economic area on the opposite side of the Huangpu River.

The restaurant’s international flavour well suits this cosmopolitan city, constantly reinventing itself as a modern trading centre that is still proud of its past.

From the mid-19th century, Shanghai flourished as a centre of commerce between China and other parts of the world, mostly because of its favourable port location. Foreigners poured in.

In the Twenties, the city was famous for its jazz bands and brothels frequented by American naval personnel. Wallis Simpson came to the city to try to patch up her first marriage.

Then, in the Thirties, Shanghai was the port of last resort as almost 20,000 desperate refugees fled from Nazi Europe.

After Japanese troops occupied the city, most Jews were forced into a sector for ‘stateless refugees’ in the Hongkou district, which became known as the Shanghai Ghetto.

Life was tough for them and when the ghetto was liberated in 1945, most left to start new lives in Australia, the U.S. and Israel.

Today, this corner of the city is beginning to attract tourists, and city bigwigs are keen to cash in on such an unusual heritage site.

The old synagogue – a factory in Communist times – has been rebuilt and is called a museum to fit in with official Chinese policy towards religion. Only the down- at-heel gift shop, offering a few books with curled edges, betrays a Communist past.

The nearby houses are lived in by Chinese families who have been left behind by the economic boom in the rest of the city.

I see some pyjama-clad men, a Shanghai habit the local authorities wish to discourage.

A few have set up lacklustre commercial enterprises; shoe menders, tailors and a beauty parlour with a swatch card in the window offering various hair colours for dyeing. But none was busy.

Returning downtown, I walk along the Bund and dive into one of the many sophisticated bars for a cocktail.

Modern Shanghai has an undeniable vibrancy while clinging on to the remnants of its Twenties’ decadence. That’s a heady concoction.

Les Parisiennes: How The Women Of Paris Lived, Loved And Died In The 1940s (Orion), by Anne Sebba, will be published in paperback on June 8.