BBC Radio 1’s Greg James was set to interview Shawn Mendes earlier this week but was stood up by the pop star – who later texted him to apologise.

Sharing the exchange on Instagram, the Canadian singer-songwriter explained how there had been a ‘miscommunication’ and Greg – who had no hard feelings – then asked for some personal hairstyling tips from the Senorita hitmaker. Sean obliged revealing he uses Moroccanoil Hydrating Styling Cream as his weapon of choice.

Greg wrote: ‘And also, while I’ve got you, from one long-haired sex symbol to another, can you recommend some good styling products please?’ 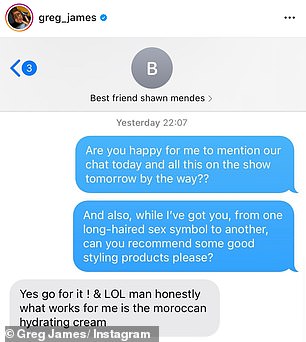 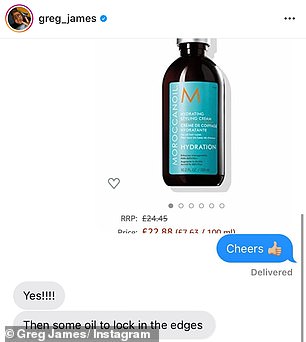 Replying to Greg’s text, the star replied: ‘Yes go for it! & LOL man honestly what works for me is the moroccan hydrating cream. Then some oil to lock in the edges.’

Moroccanoil Hydrating Styling Cream has become a hit in the beauty community thanks to it its ability to condition, hydrate and fight frizz with its nourishing, argan-oil infused formula.

And it seems the haircare brand isn’t shy of famous fans, as Victoria’s Secret model Sara Sampaio has too revealed that she uses the Moroccanoil Oil Dry Shampoo Dark Tones to refresh her brunette locks after hitting the gym.

And they’re far from alone. Argan oil, which has been used for centuries to treat dry skin and joint pains, has become the beauty elixir du jour.

Full of antioxidants and vitamin E, the oil, which is produced from the kernels of nuts from Morocco’s argan trees, it’s said to not only work wonders on hair but reduce the appearance of wrinkles, scars, stretch marks and acne, too.

The Moroccanoil Hydrating Styling Cream, which costs £22.92 (£1.53 off), has amassed over 1,500 five-star reviews on Amazon. Customers say they ‘love it’, for ‘thick hair that’s prone to frizz’, describing it as the ‘best styling product ever’. 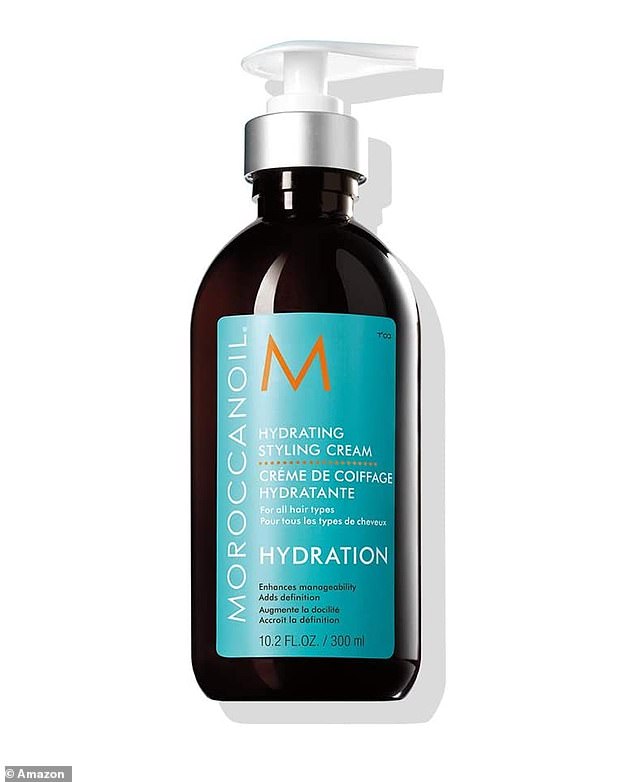 Moroccanoil Hydrating Styling Cream has become a hit in the beauty community thanks to it its ability to condition, hydrate and fight frizz with its nourishing, argan-oil infused formula

‘I’ve been using this for years, after washing my hair I apply it before brushing and blow-drying,’ wrote one shopper in their five-star review. ‘My hair is perpetually dyed, so can tangle easily, this makes it much easier to get a brush through and provides protection when blow-drying. Hair feels lovely and soft afterwards.’

‘I love this stuff,’ another wrote. ‘I have the oil which I don’t get on with because my hair seems to have stuff sit on it so it feels oily and it appears to decrease the shine! But creams seem to work much better.

‘It smells lovely, makes my hair feel soft, holds wave etc., and I’m hoping this maybe be the magic potion I need to steer me away from having to use heat on my usually unruly frizzy hair!!’

They added: ‘It’s a bit pricey, but if it works it’s worth it, I’ve wasted money on products that don’t work. You only need a small amount. Will definitely buy it again!’