This is the adorable moment a herd of sheep led by an alpaca tried to make their way across an icy road only to calamitously slip and fall.

The herd of sheep attempt to follow Lola the alpaca in a straight line, but most of the sheep fall to the ground and bleat in confusion not able to handle the slippery road.

Filmed in Winchester Springs, Ontario, Canada yesterday, where temperatures were as low as -16 C, the clip is an hilarious and sweet show of the woolly sheep.

The clip starts with a Lola, a black alpaca, running ahead leading the flock of sheep while skidding and sliding all over the place.

Despite the wobbles, Lola manages to stay up straight, but the same can’t be said for her sheep followers.

The second sheep in the line, falls over entirely, twisting onto its back with its legs skewed to the side and many others fall behind.

But the fluffy friend manages to flip back up and joins the herd running.

Many of the little sheep, who were accompanied by goats as they crossed the ice, lost their balance and slid and skid all over the place.

The array of black, white, brown and spotted sheep, goats and mammals eventually make it across the snow, bleating in confusion the whole way.

A sinking sheep! Lola the alpaca led the flock only, most of whom slipped and fell over the ice 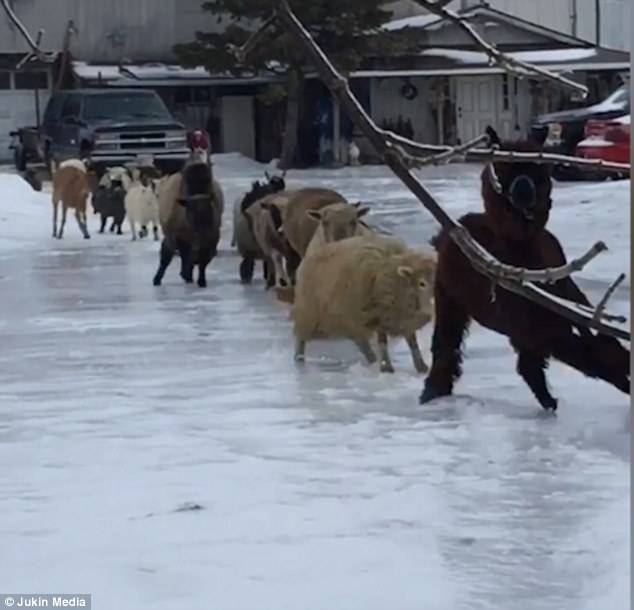 Slippery slope: The sheep and goats run across the ice but struggle as many fall over 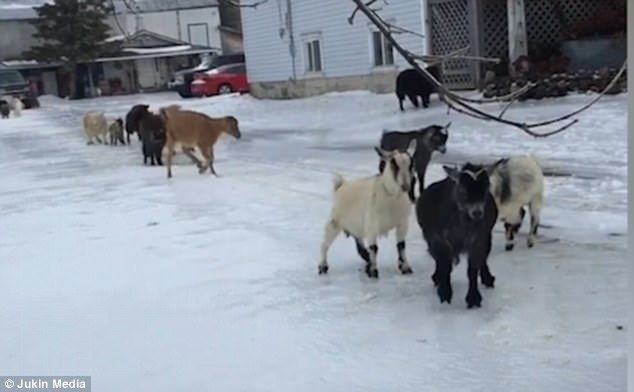 Not keeping on track: the sheep slip and fall all over the ice