Shell to boost payouts to shareholders after pandemic cutbacks

Shell to boost payouts to shareholders: Relief for investors after collapse in dividends during pandemic

Royal Dutch Shell plans to hand shareholders more cash in a boost to investors who have endured a devastating collapse in dividends since Covid struck.

The energy giant slashed its payout last year for the first time since the Second World War in a move that deprived pensioners and savers of crucial income.

It said the dramatic two-thirds cut was necessary so that it could pay down debt after oil prices plunged.

But yesterday it said the rally in the oil price means it will be able to hand shareholders between 20 per cent and 30 per cent of the cash it generates, as well as fund debt repayments.

UK dividends as a whole sank by 44 per cent to £62billion last year, leaving savings and pension pots without top-ups many have come to rely on.

Steve Clayton, fund manager of the Hargreaves Lansdown Select funds, said: ‘To see Shell confident enough to begin returning a bigger share of its cashflow to shareholders feels like a watershed has been crossed on the road to dividend recovery.

‘This news will come as a welcome relief to thousands of private investors and pension funds alike. Last year saw savage dividend cuts.’ 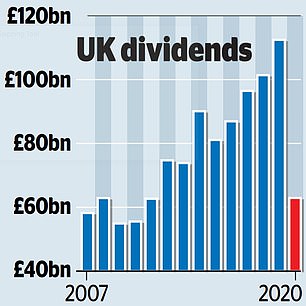 Shell was the largest dividend payer on the Footsie in 2019, when it gave out £11.9billion. But this fell to around £4billion last year.

It also kicked off a widespread restructuring programme that included axing 9,000 of its 86,000 workforce as it battled to survive the pandemic.

Demand for oil has rocketed as lockdown restrictions have unwound in many major countries, in turn sending the price of crude to six-year highs of around $77 a barrel.

Shell has not said whether the cash that it plans to distribute will be through dividends or share buybacks, and it is not clear how much money this will translate to.

It will give more detail in its second-quarter results, which will be released on July 29.

JP Morgan said that it was an ‘important milestone’ that highlights how much cash the company is generating.

In the first quarter of this year Shell posted a £2.3billion profit having swung to a £16billion loss in 2020 – one of the largest in corporate history.

The pledge to boost what it hands to investors indicates Shell is confident that oil prices will stay high, even as risks are growing that they could plunge after talks between members of the Opec+ cartel failed to reach a production agreement. 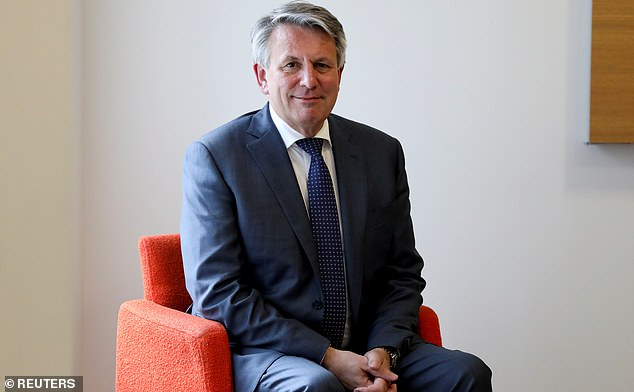 If the discussions completely fall apart, countries could ramp up the volume of oil they pump out, which could flood the market with excess oil and knock prices.

However, if the spat is resolved then members could keep production at conservative levels and keep the price high.

Russ Mould, investment director at AJ Bell, said yesterday: ‘Today’s teaser from Royal Dutch Shell ahead of second-quarter results will be getting its investors as excited as James Bond fans are by the trailer for the latest in the film series.’

But he added: ‘Wild swings in the oil price make the kind of long-term planning and investment Shell will require to successfully transform itself into an energy business fit for a post-fossil fuels future a real challenge.’

A Dutch court ruled last month that by 2030 Shell must reduce its net carbon emissions by 45 per cent compared with its 2019 levels.

Shell had vowed to reach net zero, meaning it will balance out any emissions that it produces, by 2050.

Chief executive Ben van Beurden has promised the company will ‘rise to the challenge’ of meeting the emissions targets.

But he has also warned that winding down its oil and gas business too rapidly could lead to a ‘valley of death’ for the firm.

Van Beurden says the switch to renewable energy will need to be funded by the money generated by its traditional fossil fuel sales.