A boat which capsized on New South Wales’ mid-north coast has been found off Sydney’s Bronte beach after drifting almost 200km.

Authorities started searching on Sunday morning for a father and son who were on the capsized cruiser.

The men set off an emergency distress beacon 6.5 nautical miles northeast of Forster, which was picked up by the Australian Maritime Safety Authority.

A 44-foot-cruiser which capsized on NSW mid-north-coast has resurfaced almost 200 kilometres away off of Bronte Beach, east of Sydney

Shortly afterwards a 37-year-old man was spotted by the Westpac helicopter and rescued by a small tender launched from a nearby container ship.

But an extensive search failed to find the rescued man’s 77-year-old father.

Authorities presume the man died in the water but his body is yet to be located.

The capsized 42-foot-cruiser was spotted early on Thursday morning about two kilometres off Bronte beach having drifted down the coast to Sydney.

Police divers have since confirmed no one was on board and a salvage operation is now underway. 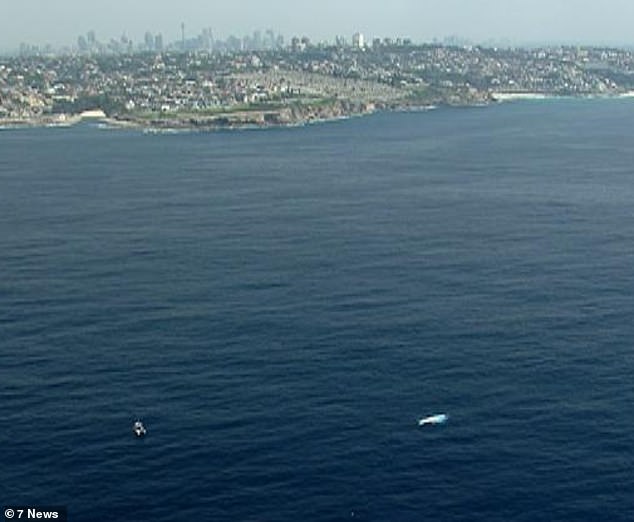 A father and son were on board the 44-foot-cruiser (pictured off Bronte Beach), the son was rescued shortly after it capsized however his 77-year-old father is yet to be located