A shirtless man has been filmed fleeing from police as they repeatedly try to mace him in the face.

Daniel Graetzer uploaded a video of the man running down the streets of Fitzroy in Melbourne at midday while being chased down by two uniformed officers.

‘Just another Tuesday in Straya. This bloke just tried to steal a cop car… #LuckyThisIsntUSA’ the caption on the video reads. 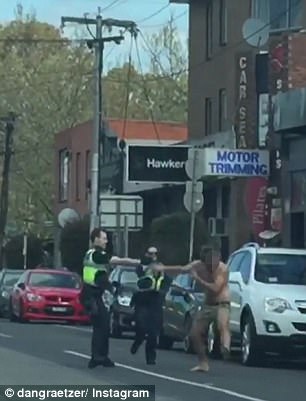 The man, who is dressed only in a pair of thigh-skimming cargo shorts and a black belt, can be seen haphazardly dodging a spray the male police officer is hurling at him (pictured)

The man, who is dressed only in a pair of thigh-skimming cargo shorts and a black belt, can be seen haphazardly dodging capsicum spray the male police officer is hurling at him.

The man is yelling profanities in the authorities direction but they are indistinguishable on the video.

He also appears to beat his chest with one fist as though encouraging the police to continue chasing.

The female officer also appears to be holding a spray bottle but is not using it during the 100 metre dash the trio make on foot. 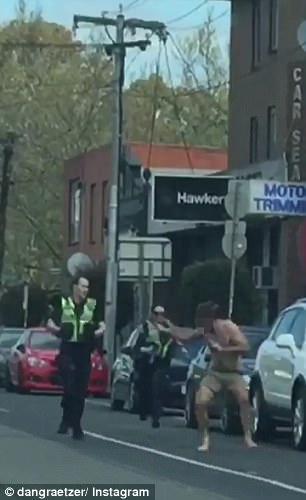 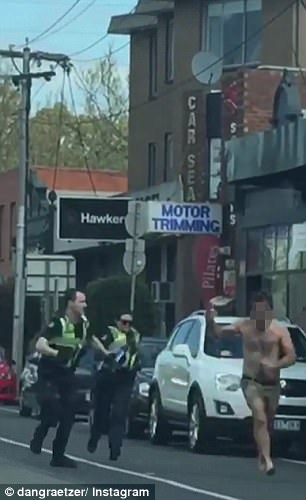 Victorian police confirmed that the 24-year-old man was driving erratically on Alexandra Parade and hit a traffic sign. His car ended up on the footpath shortly after the crash.

The man then began running through oncoming traffic, which was when police gave chase with capsicum spray. One police officer sustained a facial injury and the second member got secondary exposure to the spray.

He was arrested on St Georges Road in North Fitzroy and is currently in hospital on police guard. He is yet to be charged.

Many of the commenters underneath the post where quick to laugh at the strange situation and point out how Australian it is.