Queensland Premier Annastacia Palaszczuk has offered rare praise to NSW after criticising the rival southern state throughout the course of the Covid-19 pandemic.

In an interview on the Today Show on Tuesday morning, Ms Palaszczuk pointed to NSW’s achievement in fully vaccinating more than 80 per cent of eligible people as the example she would like Queensland to emulate.

‘I was ridiculed when I said I would like to see 90 percent [vaccination rate in Queensland],’ she said.

‘New South Wales has hit 90 percent. ACT has hit 90 per cent. We could be the best vaccinated country in the world if we get our vaccination levels up.’

Ms Palaszczuk said the ‘massive’ Delta outbreaks had encouraged people in NSW and Victoria to get vaccinated in order to regain freedoms, unlike the situation in Queensland.

‘In Queensland, we’ve had the luxury of essentially being largely Delta free so now it is really important for people across Queensland to get vaccinated and lift our vaccination rates as soon as possible.’

The comments contrast with Ms Palaszczuk’s scathing criticism of NSW as recently as September, when she spoke at the CEDA conference in Brisbane.

‘Eight days after the start of its current outbreak, NSW was yet to enter lockdown.

‘It’s been in one (lockdown) now for three months at a cost to business of $100 million a day.

‘Our neighbours fight to regain their freedoms,’ she continued. ‘We fight to retain ours.’

The frosty relationship between Ms Palaszczuk and former NSW Premier Gladys Berejiklian was laid bare when a series of icy text messages were released in June.

The conversations were released under a Right To Information request and appeared to show the breakdown in civil communication between the two leaders.

What started out as warm and friendly texts between the pair in January 2020 after the devastating bushfires quickly descended into single-word ‘thx’ responses.

The two leaders have been at loggerheads over the response to Covid since the beginning of the pandemic, with a series of border closures between NSW and Queensland causing havoc for residents of both states.

Ms Berejiklian, who stood down as NSW Premier on October 1 ahead of a state corruption inquiry into her secret relationship with disgraced MP Daryl Maguire, was vocal in her frustration at Queensland repeatedly shutting out its southern border during her time as leader. 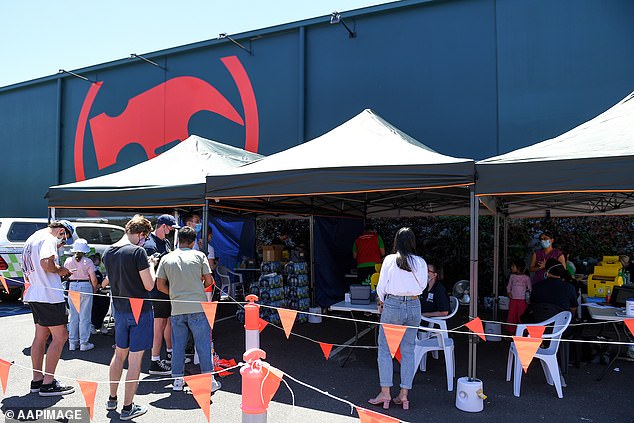 People line up to receive a COVID-19 vaccine at pop-up clinic at Bunnings Mt Gravatt in Brisbane. ‘This is going to be the pandemic of the unvaccinated so there is this a window of opportunity and time is of the essence for people to go and get vaccinated,’ Ms Palaszczuk warned

Meanwhile, Ms Palasazczuk’s government plans a ‘vax-a-thon’ in Queensland this week in order to lift vaccination rates ahead of the target dates she announced yesterday for reopening the state.

She and her ministers are visiting regional areas where the vaccination rate is lagging.

Mackay, Whitsundays, Gladstone, Mount Isa, Logan and the Gold Coast have been identified as regional areas of the state where vaccination rates need lifting, with some areas counting only just over 50 per cent of the population with a first dose of Covid vaccine.

Some areas such as Cherbourg in central Queensland may not reach full vaccination until June next year, based on current rates.

As of yesterday, 72.26 percent of Queenslanders had now received a first dose of vaccine, with 56.58 per cent fully vaccinated.

‘This is going to be the pandemic of the unvaccinated so there is this a window of opportunity and time is of the essence for people to go and get vaccinated,’ Ms Palaszczuk warned.

In another TV interview on Sunrise, Ms Palaszczuk returned to form when she criticised NSW over it decisions to end home quarantine arrangements for international travellers, saying Queensland would not end quarantine for this cohort as yet.

‘There will still be quarantine,’ she said.

‘NSW jumped the gun, surprised everybody, because national cabinet decided that NSW would do a trial of seven days home quarantine, not zero quarantine.

‘That is pretty interesting that people can go from Sydney to Dubai but they cannot go to Dubbo.

‘I am very concerned that they have jumped the gun, we are all supposed to be working together as part of the national plan, and the national cabinet, so I will be looking forward to the next meeting to see where we are with that.’ 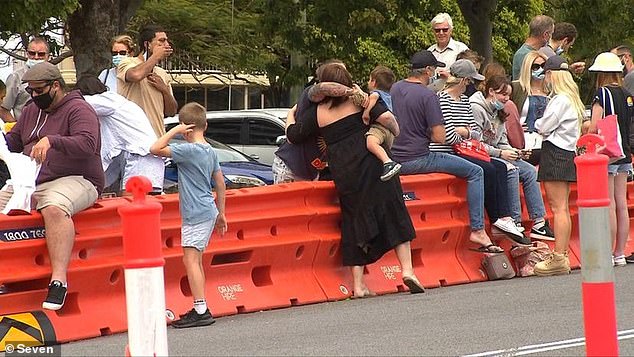 Border controls for Queensland will ease on November 19 with further restrictions dropped by December 17, when 80 per cent of Queensland’s eligible population is expected to be fully vaccinated

Yesterday Ms Palaszczuk announced that modelling showed 70 percent of the eligible Queensland population are expected to be jabbed by November 19, with the 80 per cent target expected to be reached by December 17.

From November 19, anyone who has been in a declared interstate hotspot in the previous 14 days will now be able to travel into Queensland under certain conditions, including that they are fully vaccinated, arrive by air, have a negative Covid test in the previous 72 hours and home quarantine for 14 days.

On December 17, interstate travellers can arrive by road or air, provided they are fully vaccinated and produce a Covid test, without needing to quarantine.

Ms Palaszczuk warned that Queenslanders faced ‘a last chance’ to get vaccinated or be left exposed as the state’s border controls were wound back.

‘We want families and friends re-united for Christmas.

‘If you are yet to be vaccinated you are running out of time.’