A Virginia cop shot and killed an unarmed naked man running wild on a highway.

High school teacher Marcus-David Peters, 24, rolled around on the ground and was hit by a car during his highway rampage on May 14.

When he laid eyes on Officer Michael Nyantakyi and saw his Taser he charged towards the cop, threatening him saying ‘Put that Taser down or I’ll kill you’. 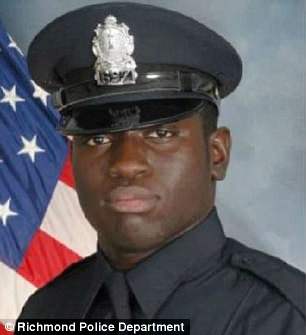 On May 14 Marcus-David Peters, 24, left, was shot and killed after he wildly ran around Interstate 95 in Virginia completely naked and confronted Officer Michael Nyantakyi, right 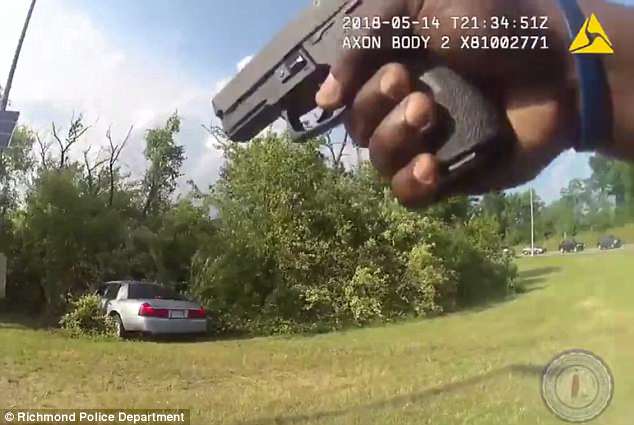 Peters, a high school teacher, crashed his car near Interstate 95 before running on the highway completely naked, footage from Officer Nyantakyi’s bodycam 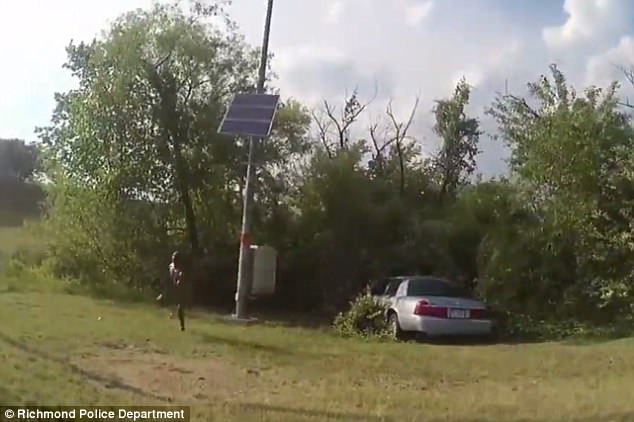 He ran into traffic and was even hit by a car, but continued to flail around seemingly unfazed 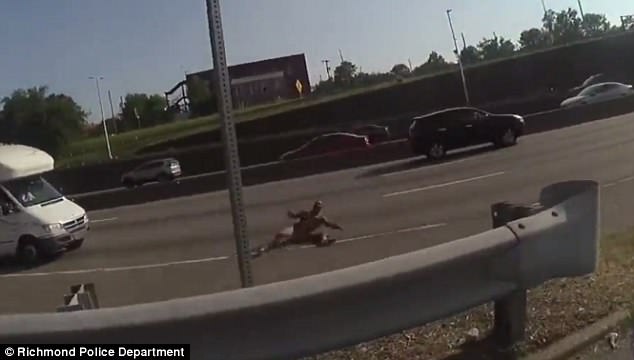 He then began rolling on the ground back and forth, disrupting traffic along the way

The footage shows Peters’ crashed car at a ramp at I-95 at Chamberlayne Avenue and shows him running off into the highway completely in the nude.

Once on the highway he was struck by a car but was unfazed as he continued to run wildly flailing his arms.

He then drops onto the ground and rolls around, stopping traffic in the lane.

He continues to writhe on the ground until he sees the officer, jumps onto his feet, and walks toward the cop saying ‘Back the f*** up. Put that Taser down or I’ll kill you’.

Then he runs towards the officer in an attempt to snatch his Taser.

In response Nyantakyi deployed his Taser but one of the prongs failed to hit Peters, who continually yells and tries to grab the weapon.

When Peters doesn’t back down, the officer fired his gun. 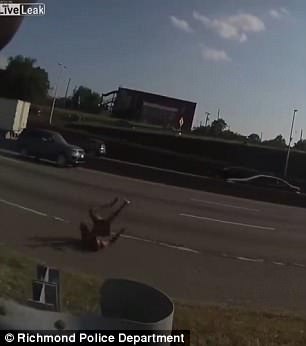 The video footage, released Friday, reveals how he rolled around on the ground At one point he dramatically laid on his back, before spotting and confronting the officer 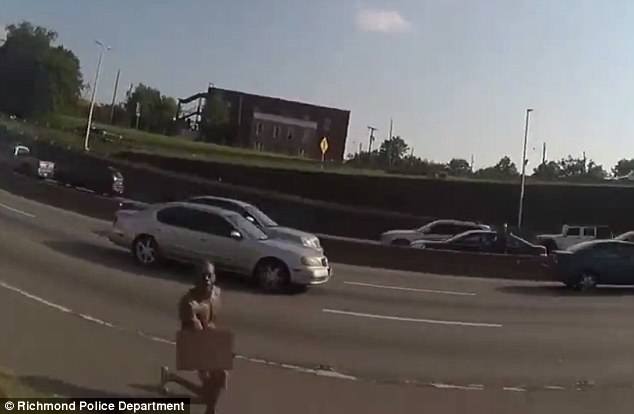 Upon seeing the officer he began to charge towards him saying: ‘Put that Taser down or I’ll kill you’ 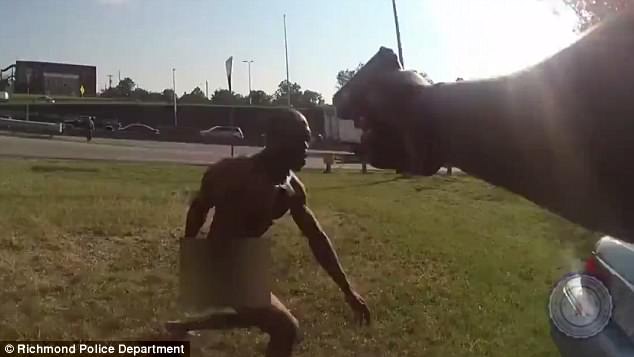 He then demanded that the officer put down the Taser, when he refused he tried to snatch it out of his hand After he repeatedly tried to snatch away the Taser, the officer shot him, blood is pictured on his head above 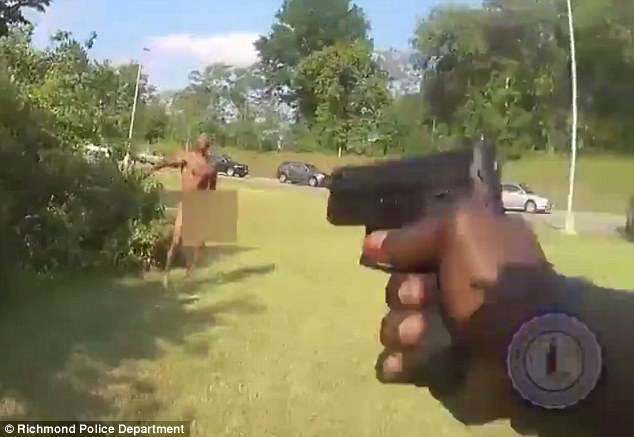 After he was shot he backed away from the officer, above, then finally collapsed 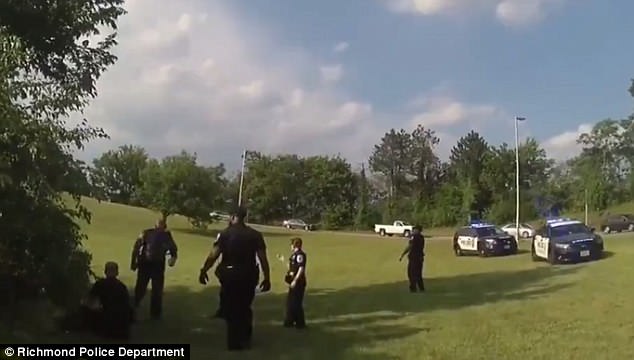 He fell to the ground and backup officer arrived to deliver first aid to him. He died the following day in the hospital

It is not clear where he shot him, but blood is visible on Peters’ head. He walks around after he was shot before finally collapsing.

In the video another officer arrives on the scene and asks ‘Did you tase him?’

Nyantakyi responds saying: ‘I tried to, it didn’t work’.

Several other police officers then arrived to the scene to deliver first aid to Peters, who died the next day, according to NBC12.

Nyantakyi is a 10-year veteran of the police force and is on administrative leave as police investigate the shooting.

Earlier in the day Peters was seen leaving The Jefferson hotel where he worked nights and weekends.

He is seen talking to an employee and leaving shortly afterwards without any clothes on and entering his car.

Surveillance video from the hotel shows Peter entering the hotel in the afternoon of May 14 and quickly take his shirt off. The cause of his rampage is not clear. He was spotted earlier in the day entering the Jefferson Hotel in Richmond where he worked nights and weekends 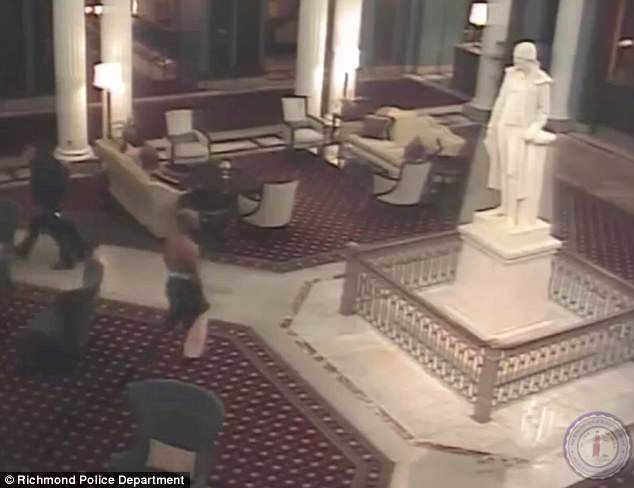 Upon entering the hotel he took off his shirt, pictured above, as he made his way through the lobby 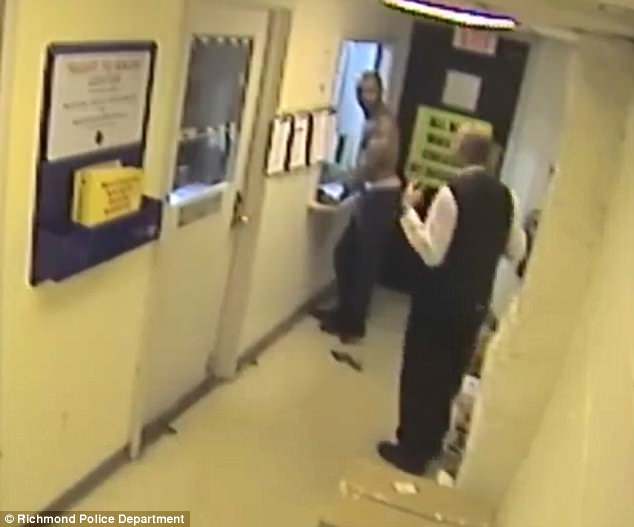 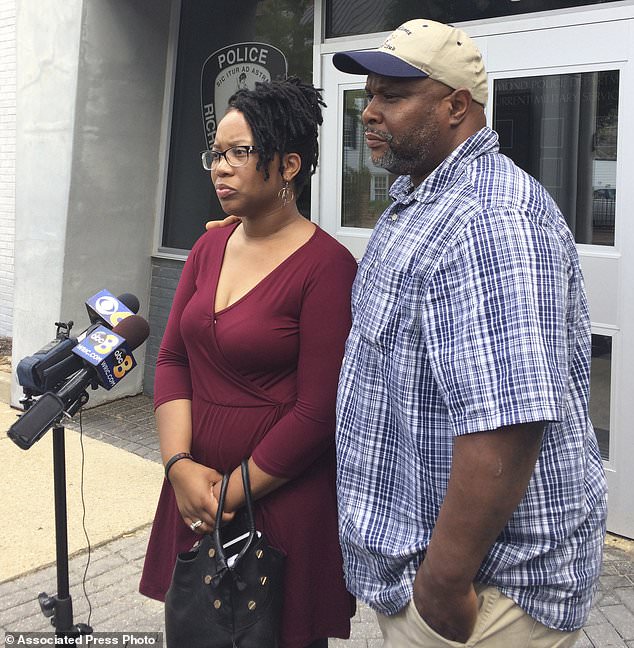 Peters’ sister Princess Blanding and his uncle Jeffrey Peters pictured above speaking to media Wednesday. Blanding said: ‘He was in need of help. He was not in need of death’

‘Since I’ve been here, we have never encountered a situation like this, ladies and gentlemen,’ Richmond Police Chief Alfred Durham said.

‘Never. And the first time, people want answers right then and there. I don’t have answers. We want a fair and thorough investigation. Do not pass judgement. If you do, shame on you,’ he said as the camera footage was released Friday.

Peters family was shown the video earlier in the week.

‘Police have confirmed Marcus was clearly unarmed. He was in distress. He was in need of help. He was not in need of death,’ his sister Princess Blanding said.

The police released a statement in light of his death.

‘We are all deeply affected by what happened here – by the loss of life. Our officers do not take the use of deadly force lightly. I think it’s important to remember that being naked does not remove a threat. So far, the eyewitness accounts we’ve heard have been consistent: our officer tried using verbal commands, then used non-lethal force first by deploying his Taser before using his service weapon,’ Chief Durham said.