Two controversial video ref decisions became the biggest talking points of the Gold Coast Titans’ thrilling two-point win over the Warriors on Saturday afternoon, overshadowing a brilliant comeback by the Kiwi side and a nail-biting finish to the contest.

The worse of the pair came just before halftime, when the Warriors’ Adam Pompey was awarded a try despite obviously not grounding the ball.

Gold Coast winger Phillip Sami failed to ground the Steeden in his in-goal, with Pompey trying to force it but only managing to push the ball into Sami’s leg before his hands slid off it.

The try and resulting conversion gave the Warriors their first lead of the match at 18-16 and kicked off some astonished responses from the Fox Sports commentary team.

Adam Pompey (right, with red boots) obviously failed to ground the ball after Gold Coast’s Phillip Sami did the same – but was controversially awarded the try anyway 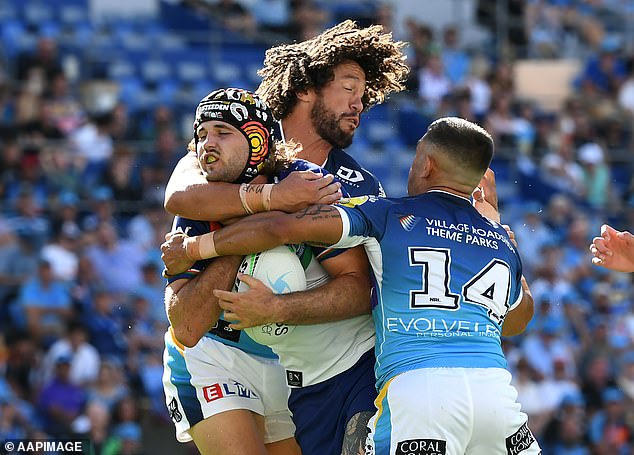 Josh Curran gets sandwiched by Kevin Proctor (middle) and Will Smith. His Warriors pushed the Titans all the way in a seesawing match

‘He doesn’t get control of it,’ Michael Ennis said. ‘It is not a try.’

‘I’m with Mick, it hits the leg but I don’t know if it gets that compression on the grass,’ said Storm legend Cooper Cronk.

‘It’s not even a clear put-down from Pompey,’ play-by-play commentator Andrew Voss said.

Another controversial call came in the 23rd minute when Chanel Harris-Tavita crashed over after cutting through some awful defence from David Fifita and battled through some Titans arms to force the ball in-goal.

Referee Adam Gee was close to the action and immediately signalled a try, but the bunker had other ideas.

After a lengthy review the video officials decided the Warriors five-eighth had lost control of the ball, prompting colour commentator and former premiership-winning coach Shane Flanagan to say, ‘They are making it hard to score tries these days.’ 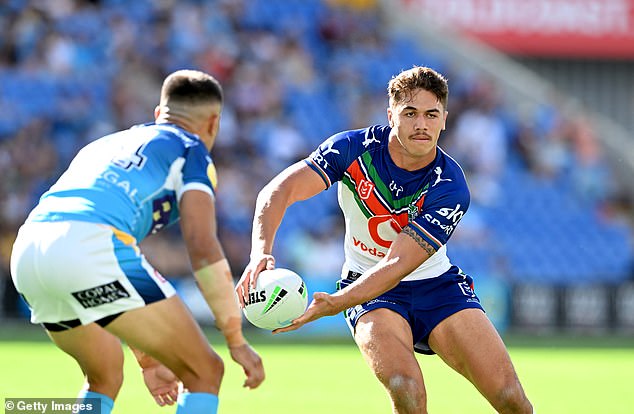 The calls punctuated an otherwise entertaining game that saw the Gold Coast roar to a 6-0 lead within the first minute after pivot AJ Brimson split the defence with some wonderful footwork and put Beau Fermor over from long range.

They made it 12-0 through powerful winger Greg Marzhew before the resilient Warriors struck back when Wayde Egan went over.

Marzhew powered over again to make it 16-6, then the New Zealanders bounced back courtesy of Marcelo Montoya to close the gap to 16-12 before the awful bunker call put them in front at the break.

The scoring slowed to a crawl in the second half, with Sami notching the only try to make it 20-18. 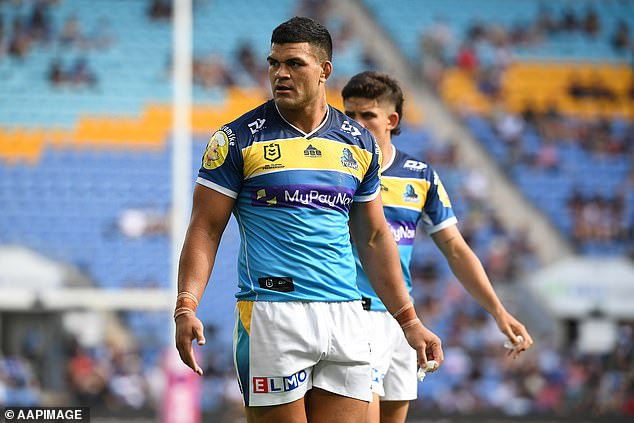 The Titans are paying David Fifita (pictured) $1million a season – and according to former star forwards Willie Mason and Martin Lang, they’re not even close to getting bang for their buck

Fifita threw a brilliant cut-out pass for Marzhew’s first try, but other than that did little to justify the huge money he’s on – and that didn’t go unnoticed by outspoken former Bulldogs star Willie Mason and former Queensland Origin forward Martin Lang.

‘What a waste of talent putting David Fifita at right side back row. SMH,’ Mason tweeted.

‘Expect f***k all ball and a lot of kick chase from him.’

Lang squarely blamed the player for the lack of output.

‘David Fifita needs to roll his sleeves up and carry the ball off his own line when required,’ he wrote on Twitter.