A binman faked an injury ‘to get compensation’ when he collapsed on the floor after a chauffeur swerved to avoid him.

Shocking video shows the man fall onto the Audi, acting being hit, before rolling around on the floor in imagined pain in Teversham, Cambridgeshire.

Wayne Nightingale, 58, said he had been left feeling ‘totally sick’ by the ordeal and ‘crucified’ because, if he lost his license, he would have been unable to work and drive, making it harder to see his three kids.

A spokesman for Greater Cambridge Shared Waste service said the employee ‘no longer works for us’ following the incident. 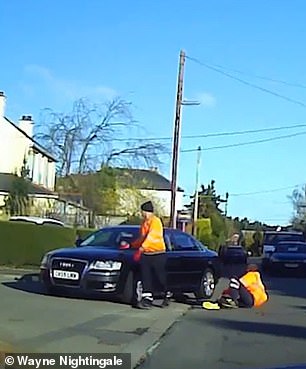 A binman faked an injury ‘to get compensation’ when he collapsed on the floor after a chauffeur swerved to avoid him in Teversham, Cambridgeshire 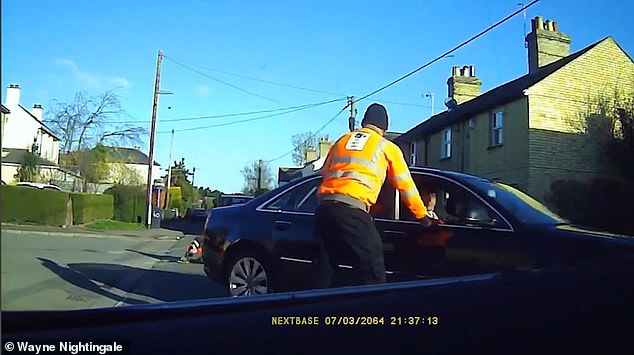 Footage caught by a dashcam shows the man suddenly fall onto Mr Nightingale’s Audi and then into the road, despite video clearly showing he was not touched by the car.

As the man continues to feign injury on the floor a second binman marches round the car and appears to gesticulate at the driver.

He then holds onto the side of the vehicle as Mr Nightingale tries to move out of the junction.

Speaking to MailOnline, Mr Nightingale said: ‘I was waiting behind the lorry while the men emptied the bins into it, I was in no rush but when the lorry drove off one of the men stood in front of my car and started saying something and pointing at the CCTV sign on the back of the lorry.

‘As he stood there I decided to go around him and that’s when he came towards my car and pretended that I hit him. But I knew I’d never touched him. 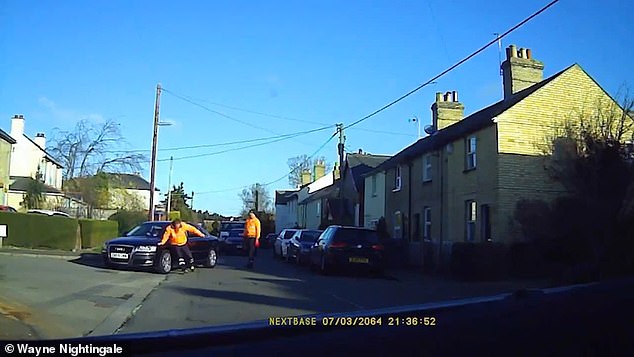 Wayne Nightingale, 58, who was driving the vehicle said he was left feeling ‘totally sick’ by the binman’s actions 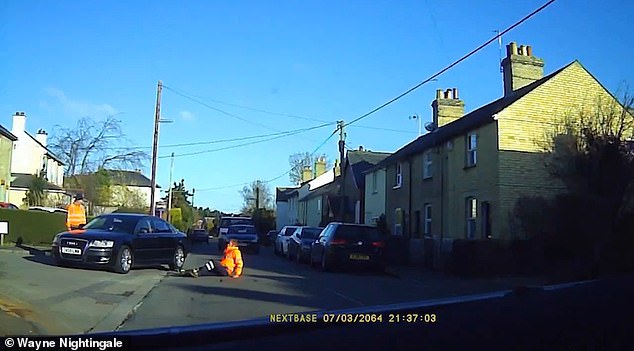 ‘The driver in front told me that he had the scene on video and we arranged for him to give it to me later on in the evening.’

He was later told the council employee had been taken to hospital by a friend, and was found to have a sprained ankle.

A waste services spokesman said supposed-accident was ‘thoroughly investigated’ as soon as it was reported.

‘We kept the resident who informed us about this updated and appreciate them bringing this to our attention.’

‘I cannot stress enough how lucky I was that the other driver had a dashcam, as a chauffeur, if I had lost my license I would have lost my job which was a very scary thought.’

Mr Nightingale received a letter from both the council refuse department and the police about the imagined injury before he was able to use the video footage to prove it was a fake.

The incident happened on March 11th this year.