Shocking fight breaks out between schoolgirls in Melbourne

Shocking footage of a vicious brawl between two schoolgirls has emerged, with the fight ending with a teenager in hospital.

The video shows two students at St Helena’s Secondary College in Eltham North, Melbourne, attacking each other on the school grounds about 1.30pm on Wednesday.

The footage obtained by the Herald Sun shows the students punching and strangling each other, as well as wrestling on the ground.

Shocking footage of a vicious brawl between two schoolgirls has emerged, as the fight ended with a teenager in hospital

One of the girls was unconscious after the fight, while other students watched on and cheered.

‘There is no place for incidents like this at our school. It is disappointing and does not reflect the behaviour of the overwhelming majority of our students,’ he said.

He said neither student was seriously injured in the melee, although one was taken to hospital as a ‘precautionary measure and has since been released’.

The school called emergency services, and both police and ambulance officers arrived at the school after the fight broke out.

A Victoria Police spokesman said they were investigating the incident.

‘Emergency services were called to the address on Wallowa Road following reports of a fight between two girls shortly after 1.30pm.’

Both students and their parents were spoken to by police officers on Wednesday. 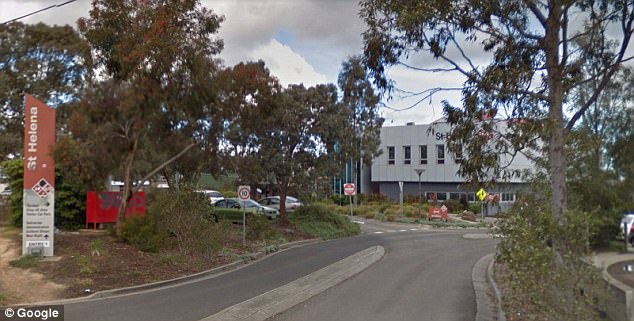