EXCLUSIVE: Shocking footage shows moment ticket inspector is kicked and hit by two thugs on the DLR ‘after asking one to take his feet off seats’

This is the shocking moment a ticket inspector is kicked and hit by two youths after he ‘tried to move a member of the group’s feet off the seats’.

Footage shows the pair trying to attack the staff member, who is kicking them back, as the train approaches Shadwell station on the DLR in London.

The ticket inspector had been ignored by a member of the group when he asked him ‘nicely’ to remove his feet from the seats, a witness said. 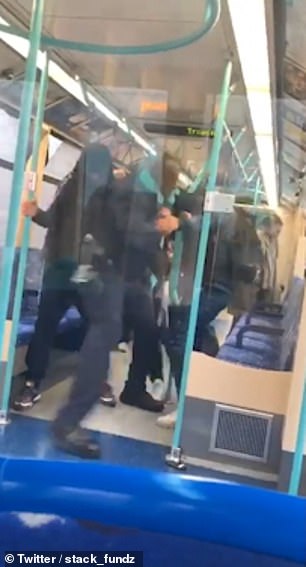 The horrifying clip, filmed at 9.45am on Sunday, shows one of the youths attempting to kick the ticket inspector and hit him while a second tries to hit him.

The staff member retaliates and swings on a handrail as he tries to kick a youth in the chest, before also starting to hit them back.

A person stands between them and tries to break up the fight, as a woman in the background yells: ‘Stop it!’

On the video the ticket inspector can also be heard repeatedly telling the youths to ‘sit down!’

A witness told MailOnline: ‘Basically what happened, before the ticket inspector came into the carriage, one of the guys was laying down on the chairs with like it was a bed and no one was able to sit down, the inspector came over to them and asked nicely for him to take it feet off the chairs. 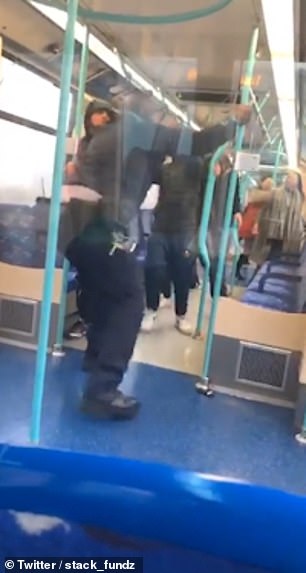 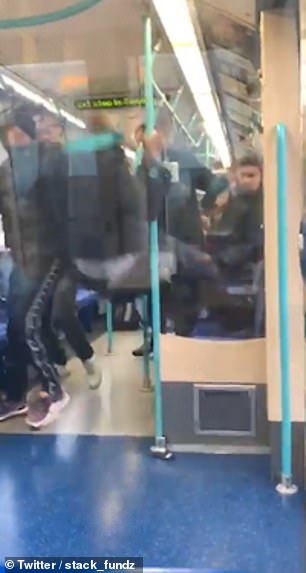 The staff member retaliated against the attack by swinging on the handrail as he tried to kick one of the youths. A woman in the background can be heard yelling: ‘Stop it!’ 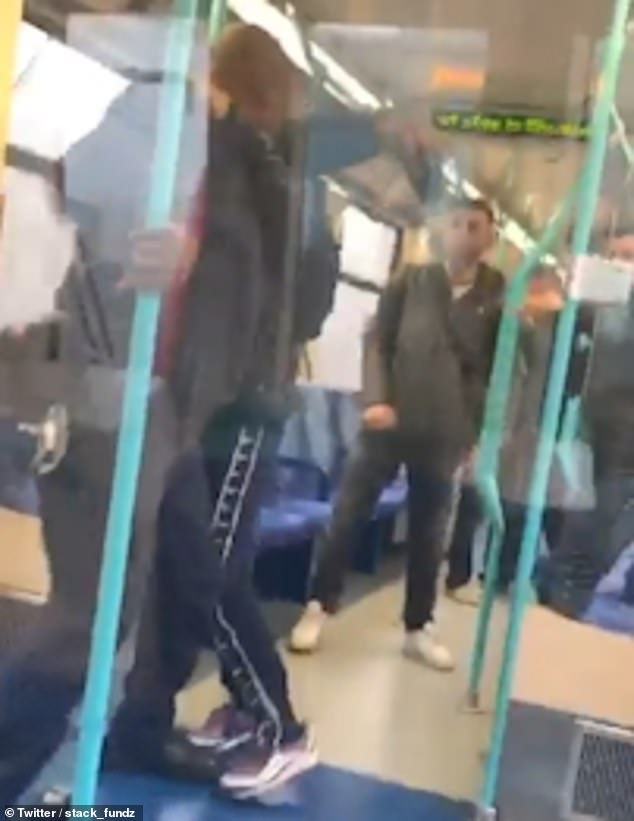 An allegation of assault and a racially aggravated public order offence is being investigated by the British Transport Police following the fight, pictured above

‘The guy continued to ignore him and the inspector moved his feet and then that’s when it kicked off, two of the guys was fighting and the other friend was trying to stop it, this all last within to two stops.

‘The guys fighting were injured and the inspector seem to be okay. After I believe the police was called but by then I had already left the exit to continue on with my route

‘After I stopped filming, loads of people was watching, shouting, trying to stop the situation and help the inspector.’

An allegation of assault and a racially aggravated public order offence is being investigated by the British Transport Police.

‘Officers are aware of footage circulating on social media in relation to this incident, this footage is being reviewed as part of the investigation’, they said.

‘The victim, a member of rail staff, was not seriously injured.’

The video was posted on social media at midday yesterday and has been viewed more than 90,000 times.