Doctors have released horrifying images of a girl whose skin was eaten away and left red raw after being bitten by a snake.

The unidentified 11-year-old, from a rural part of Zambia, was originally nipped on the arm and went to local healers for ‘traditional’ remedies.

She needed hospital treatment the next day when her left arm turned dark in colour and the ‘throbbing’ pain in her limb became worse, spreading to her chest.

Concerned medics decided to transfer her to a city hospital 50miles (80km) away, although, for reasons unknown, it took her six days to get there.

Doctors in Ndola, close to the Democratic Republic of Congo border, diagnosed her with necrotising fasciitis (NF) when she eventually arrived in a ‘critical condition’.

The unidentified 11-year-old, from a rural part of Zambia, was originally nipped on the arm and went to local healers for ‘traditional’ remedies (pictured 22 days after going to hospital, before having her wounds reconstructed)

Medics who treated her saw a ‘patchy brown’ rash across her body, alongside ‘foul-smelling’ skin blisters and visible bite marks in her left forearm.

They diagnosed it as NF and worked tirelessly to stop the flesh-eating bug from taking hold, amid fears it would kill her or leave her needing an amputation.

NF, more commonly known as ‘flesh-eating disease’, is a rare but extremely vicious bacterial infection. The girl needed skin grafts to 20 per cent of her body.

As well as causing NF, the snakebite led to compartment syndrome – restricted blood flow to certain bodily parts caused by swelling or bleeding.

And she developed mediastinitis – swelling in the area between the lungs. The doctors who treated her said it has a high mortality rate.

Eventually she fully recovered, her wounds were grafted and she was discharged from hospital, the doctors wrote in SAGE Open Medical Case Reports. 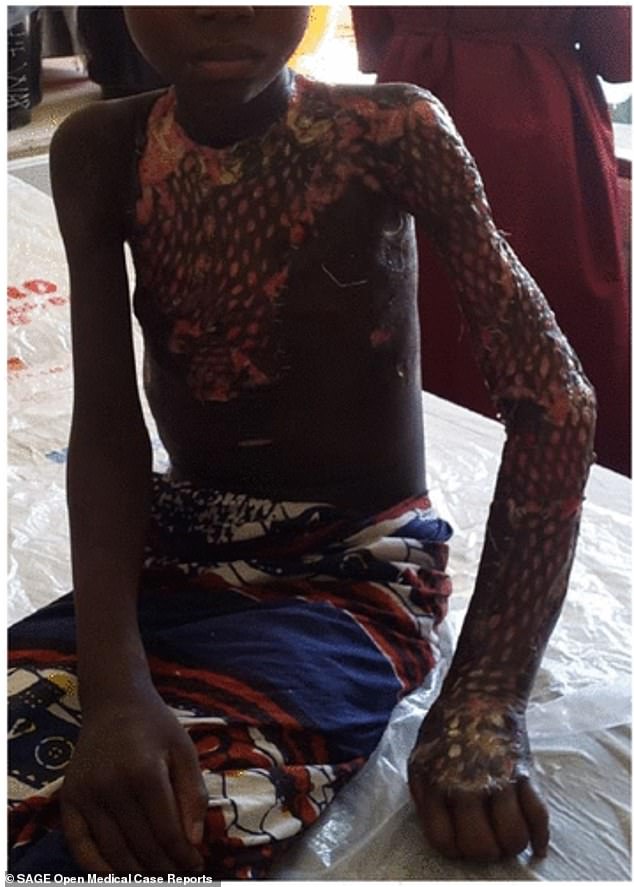 Writing in the journal, Chihena Hansini Banda and Chandwa N’gambi, who treated the girl, claimed it is the first time a snakebite has caused mediastinitis, saying that ‘no previous reports’ have been published.

The girl was bitten while playing at a farm. It is unsure what type of snake sunk its teeth into her, or whether she lived at the farm.

The medics also did not reveal what kind of traditional medicine the girl was initially given but said it was applied directly to the wound.

Medics chose to transfer her to the Arthur Davison Children’s Hospital because they feared she had blood poisoning and needed specialist care.

Banda and N’gambi described the girl as being ‘ill-looking’, with a high body temperature, an abnormally fast heart rate and rapid breathing.

They decided to begin cutting away her damaged tissue and said she needed an operation to save her limbs from being lost – called a fasciectomy.

Medics then drained multiple pus-filled blisters in her arm, hand and chest before giving her painkillers and high-dose antibiotics.

Her parents were told doctors may have to amputate if she did not show signs of recovery two days after the operation to cut away her rotting flesh.

Defying the odds, she overcame her fever, her muscles recovered and only a few pockets of pus were found when they assessed her again.

It took more than three weeks before she was able to have her wounds reconstructed through multiple skin grafts covering 20 per cent of her body that were attached to her body through a mesh structure.